back to home page
Convoluted Bliss

August 3, 2017
The Eastern horizon was glowing and mosquitoes were buzzing as the three of us hastily packed our bags and wolfed down some breakfast, eager to get started. Although I had gotten a few hours of sleep near Utility Rd below Tioga Pass the previous night, Toshi and Sean had gotten almost none, opting to drive over from Gilroy in the wee morning hours due to scheduling. As we were getting ready to leave, a grumpy ranger drove by and checked our permits, then proceeded to knock on other cars in the parking lot when she suspected there were people sleeping inside them. This was probably a routine ritual for her every morning which might've explained her grumpiness.

Shortly before sunrise, we were off with 45 lb packs, hiking on well maintained trails towards Vogelsang Pass. This relaxing 9 mile trail served as a nice gradually ascending warm up to stretch out the legs before hitting the main ridge for 8 days. The grass was super green as we made our way through expansive alpine meadows towards Tuolumne Pass. Snow capped peaks loomed above, some of which were to be traversed within a few hours. 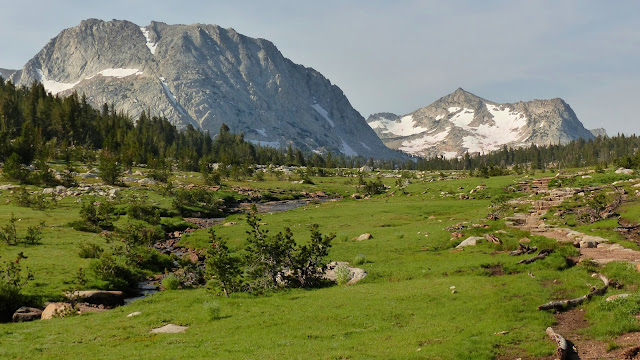 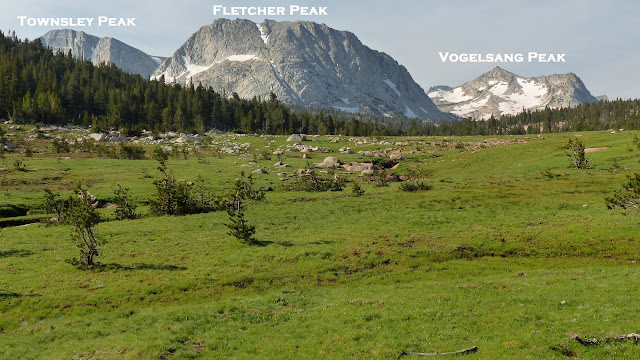 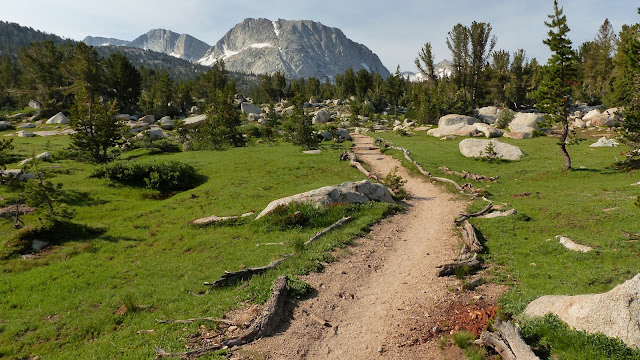 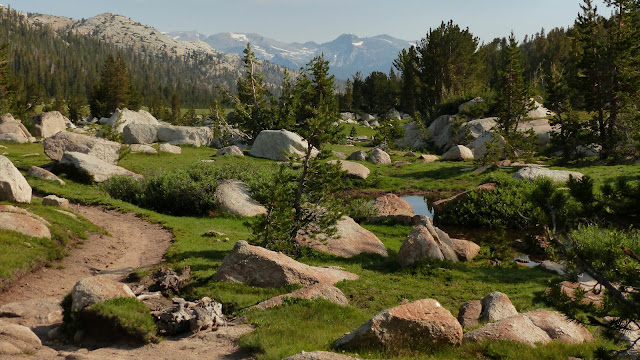 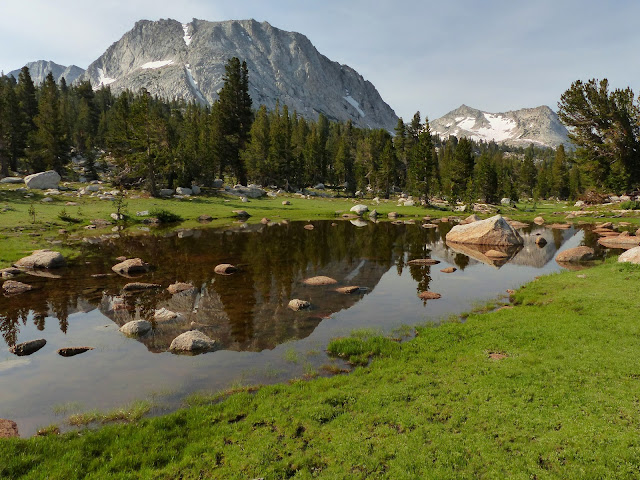 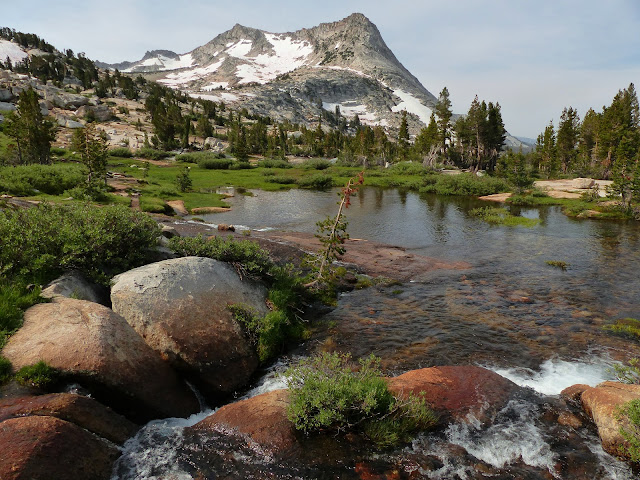 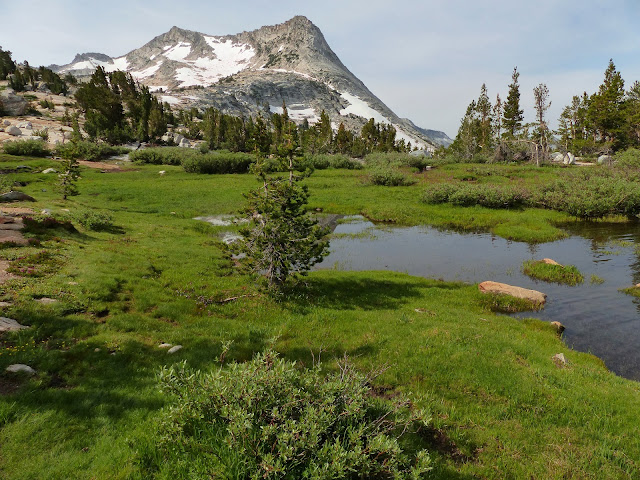 Passing through Vogelsang High Sierra Camp, we noticed that the camp didn't seem fully operational despite it being August. This was likely due to the high snow year and high water levels, making it difficult for pack trains to bring in food and gear. Shortly after the camp, we arrived at Vogelsang Lake, the last reliable water source before the traverse ridge. We did later find a babbling creek just below Vogelsang Pass, but this seemed seasonal. 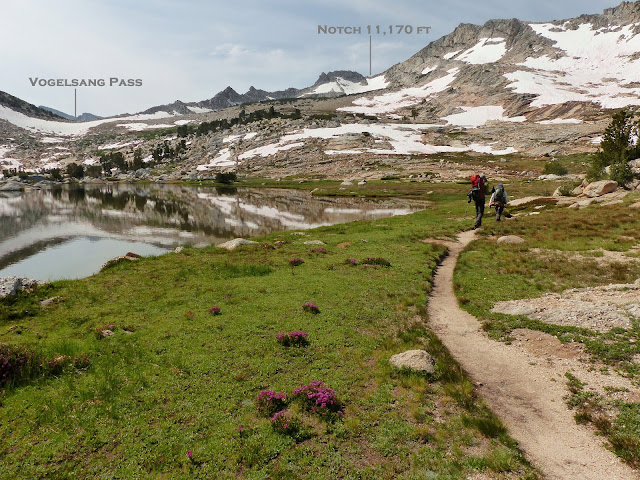 The first two peaks on this traverse were to be climbed as an out-and-back from Vogelsang Pass. About a hundred feet before Vogelsang Pass, we left the trail, heading southwest up a wide snowy canyon and then up a short 25-30 degree couloir to a notch (11,170 ft) on the east shoulder of Vogelsang Peak. From there it was an easy walk with some light bushwhacking up to the peak. 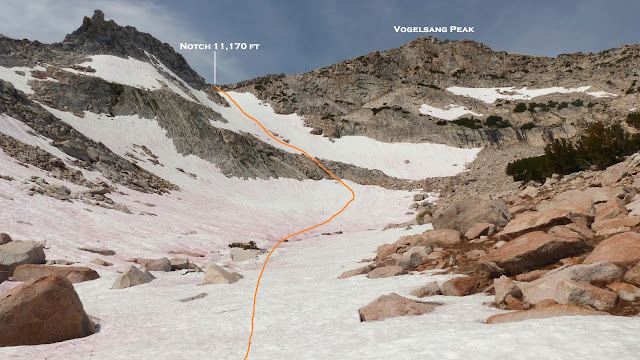 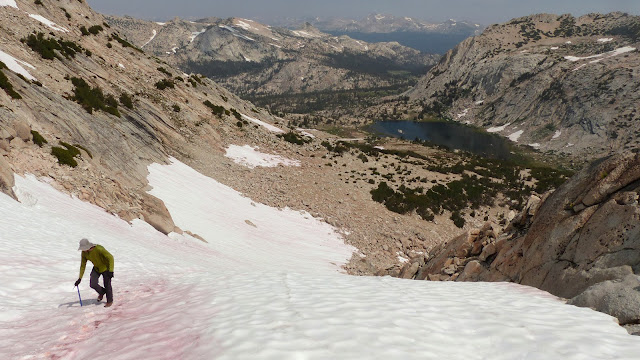 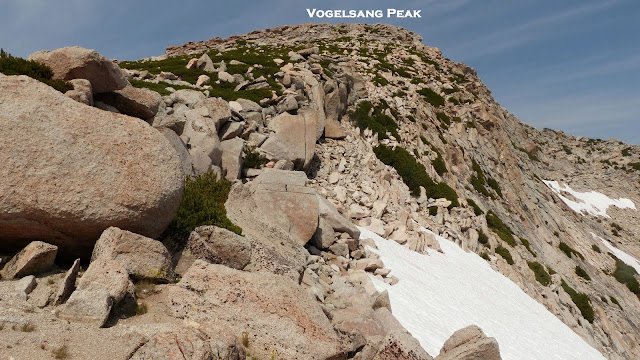 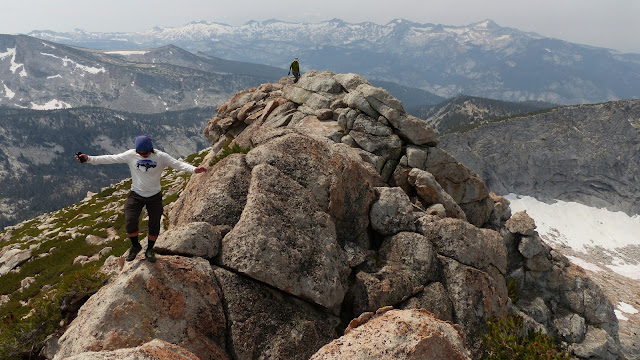 To the southwest loomed Emeric Peak several hundred feet lower but much more impressive looking than Vogelsang Peak. Its north face and northwest ridge looked especially interesting, presenting a wide variety of possible trad climbs which I noted for future outings. On this particular traverse, we were to climb it via its east ridge. Descending Vogelsang's southwest ridge was mostly uneventful with boulder hopping and brush. Emeric's east ridge contained some fun class 3 knife edge scrambling at the start, then turned into more boulder hopping closer to the summit. We relaxed on the summit for a few moments before retracing our steps back to Vogelsang Pass. 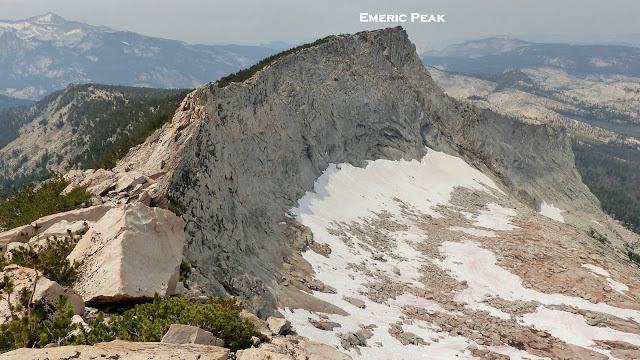 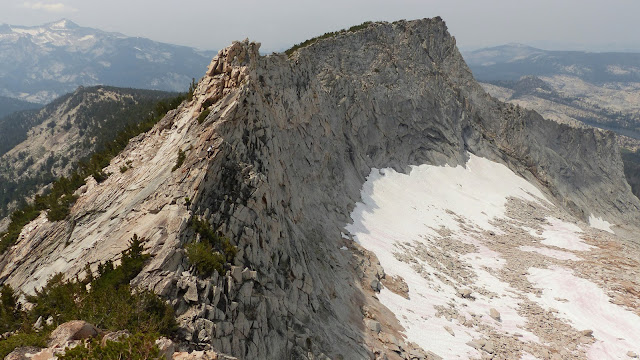 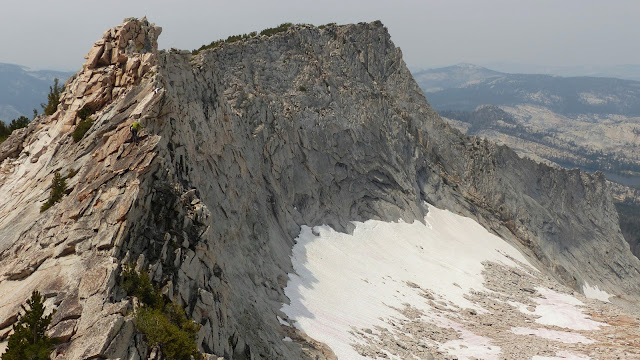 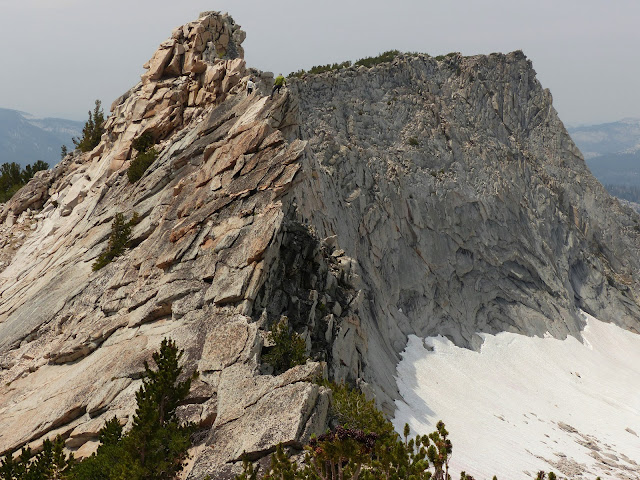 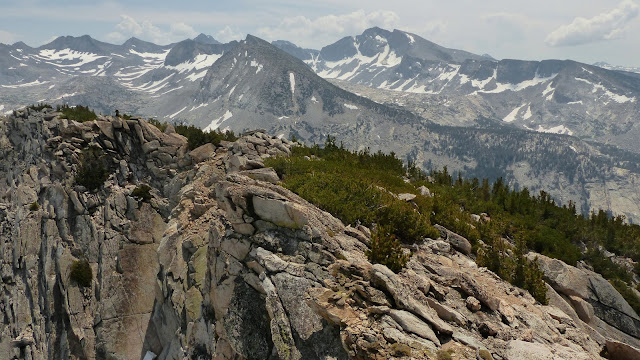 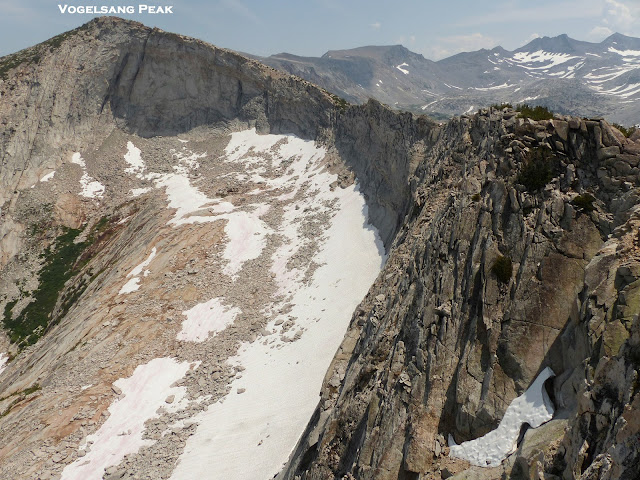 back down the initial snowy canyon 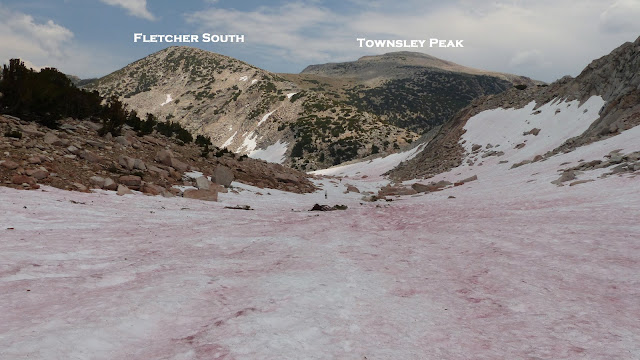 Back at Vogelsang Pass, we ate lunch and watched as storm clouds quickly moved in, quickly enveloping peaks a few miles south. It seemed like the weather was generally moving in a northwest direction. We decided to start up Fletcher South's southwest ridge anyway, seeing multiple spots to hunker down along the way in case the skies opened up. This class 1-2 ridge gained roughly 1,000 ft and was pretty uneventful, consisting of mainly dirt, decaying boulders, and stubborn whitebark pines. A few rumbles of thunder sounded from the west as we ascended. It looked like this particular cluster of storm cells had narrowly missed us and was now over the Clark Range.

After what felt like a while with heavy packs weighing us down, we reached the summit of Fletcher South. Here we dropped our packs and began an out-and-back traverse towards Fletcher Peak whose summit was slightly lower. More rocks and whitebark ensued. 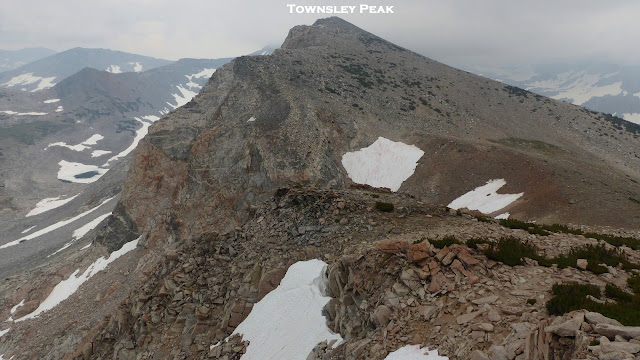 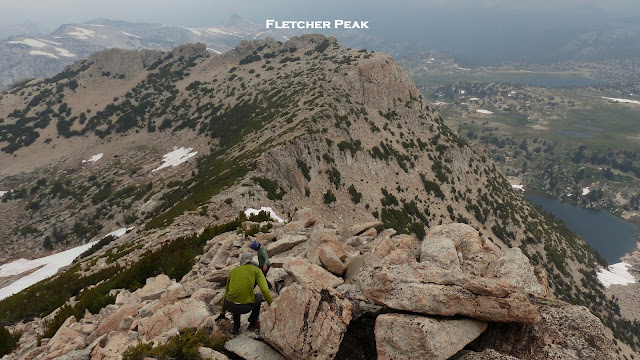 As we clambered onto the summit blocks of Fletcher Peak, some loud thunderclaps sounded to the north. Normally the view from this peak was supposed to be amazing, but we couldn't see a thing since the mountain was now enveloped in clouds. Another rumble sounded, and we noticed that Sean's hair was standing up on end from static. It was now definitely time to go, back up and over Fletcher South and hopefully to a spot where we could pitch our tents and brace for incoming weather. 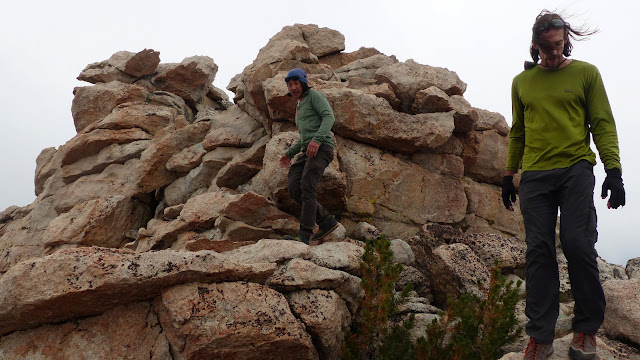 back up Fletcher South 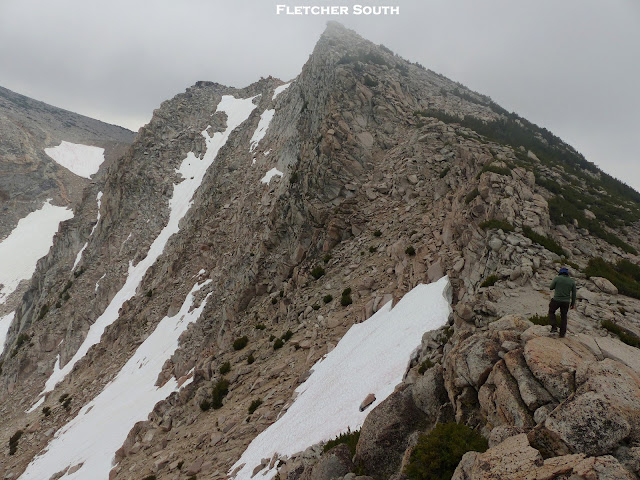 Rain was falling lightly as we reached our packs, hastily setting up our tents as it got heavier. For the next 2 hours or so a line of storms moved through the area, dropping moderately heavy rain and occasional lightning, none of which struck any closer than a mile from us. An hour before sunset, the storms fizzled out and we began packing up, hoping to continue traversing to a tarn (which I had named "Thank You Tarn") just beyond Parsons Peak. It was the next place where we would be able to obtain liquid water. 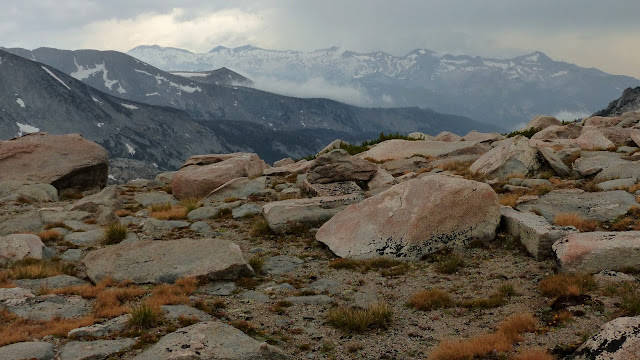 Our next peak was Townsley Peak, a very straightforward walk to the southeast. We made our way up as the last of the clouds moved away. 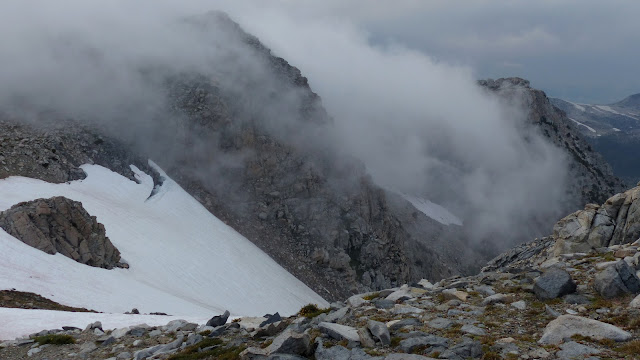 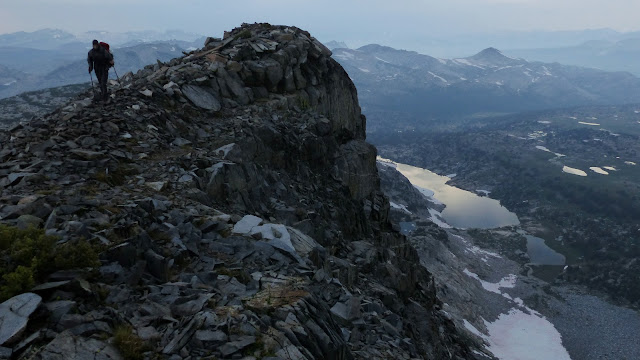 The sun set fast as we traversed up and over Townsley and across a 1 mile talus field towards Parsons Peak which was also a giant pile of talus. 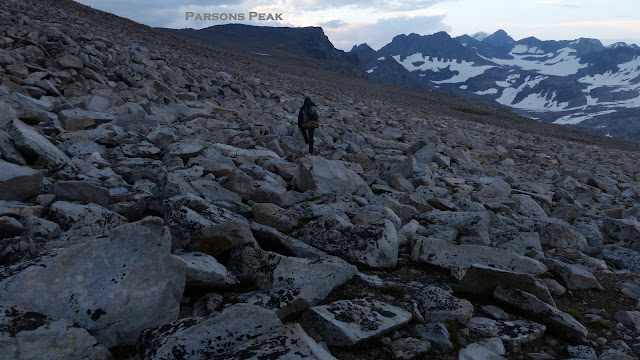 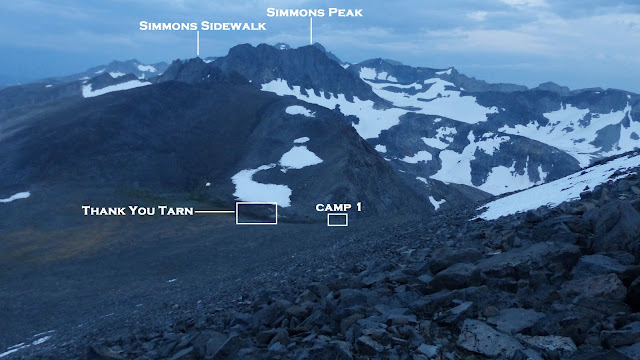 The southeast side of Parsons was a loose class 2 bouldery descent that lasted about 10 minutes before we reached the saddle which had good camping. I quickly dropped my pack and walked down to the half empty tarn to fill up on water before it got too dark to see completely. The wind picked up shortly after and we hastily boiled some water for dinner before retreating to our tents to eat and drift off to sleep. 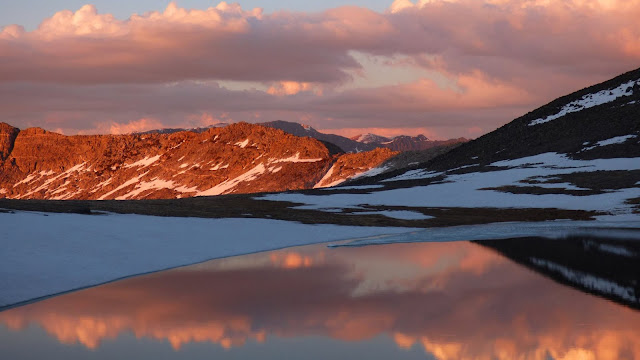