August 3-10, 2017
Surrounding the massive Merced River Drainage in southern Yosemite are three subranges of the Sierra Nevada: the Cathedral Range, Isberg Divide, and Clark Range. When combined, these three ranges form a gigantic arc around the drainage. Several years ago, some climbers got the idea to combine these ranges into a grand traverse along their main ridges. This traverse had been attempted several times, but was never completed for various reasons including terrain and accumulated fatigue. In 2015, Mason and I attempted the first ascent of this traverse, making it less than one third of the way through due to poor snow conditions and physical inability to continue traversing. In 2017 after much more preparation, Toshi, Sean, and I headed back out, completing the traverse, which I then named Convoluted Bliss, over 8 days. Requiring over 40 miles of alpine ridges and 51 peaks, Convoluted Bliss is (at the time of writing) the longest completed alpine ridge traverse in the Sierra Nevada as well as the entire United States. At the time of writing, Convoluted Bliss remains the most physically demanding route I have completed in my lifetime. 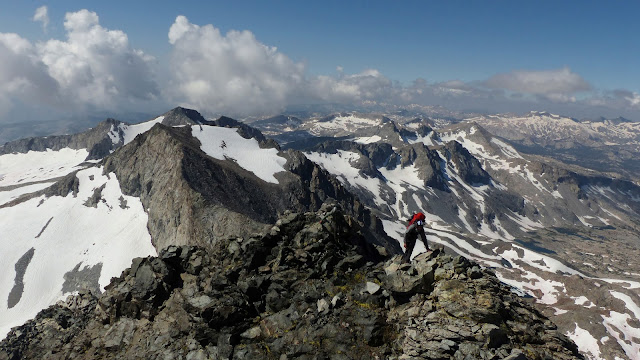 The route design was simple. The approach began in Tuolumne Meadows and followed well maintained trails for 9 miles over Tuolumne Pass and up to Vogelsang Pass. From there, we would begin traversing, gaining the crest of the Cathedral Range, following it to the Isberg Divide beginning at Rodgers Peak, and then the Clark Range beginning at Triple Divide Peak. At the end of the Clark Range, we would finish the traverse portion with a 3,500 ft descent into Little Yosemite Valley. From there began the deproach, a 19 mile 3,790 ft gain march back up and over Tuolumne Pass and into Tuolumne Meadows on maintained trails. 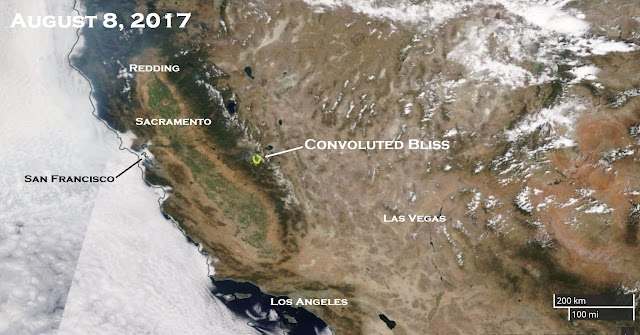 The table below includes every peak (traversing clockwise from north) on Convoluted Bliss. For unnamed peaks, I have dubbed names for them which are derived from names of nearby lakes and other geographical features. These dubbed names are in quotes. Peaks without quotes are either officially named by the USGS or were found named by previous parties who had written them in summit registers. 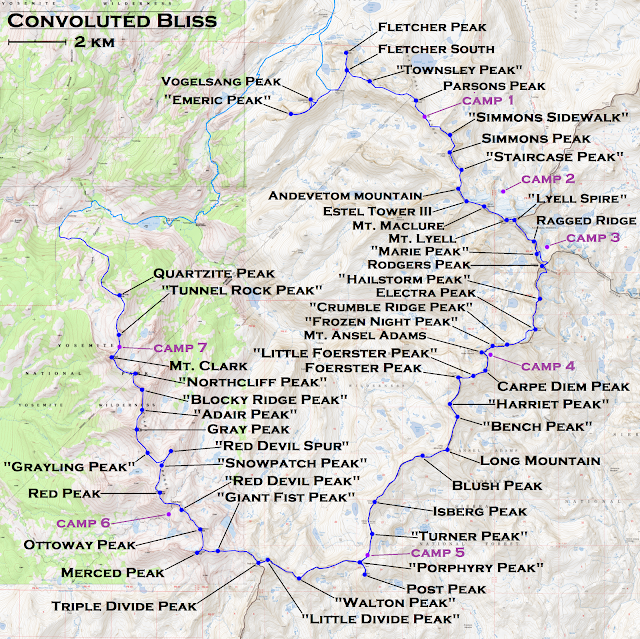 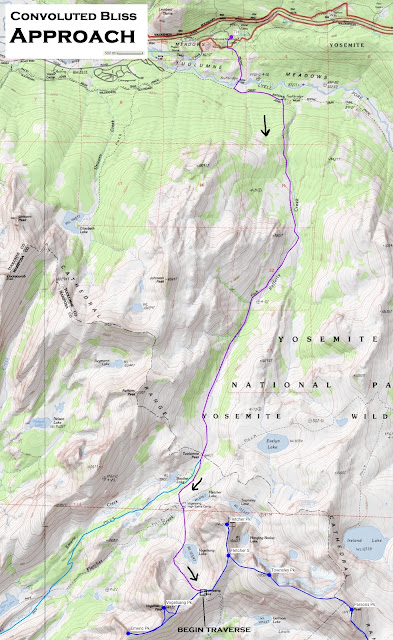 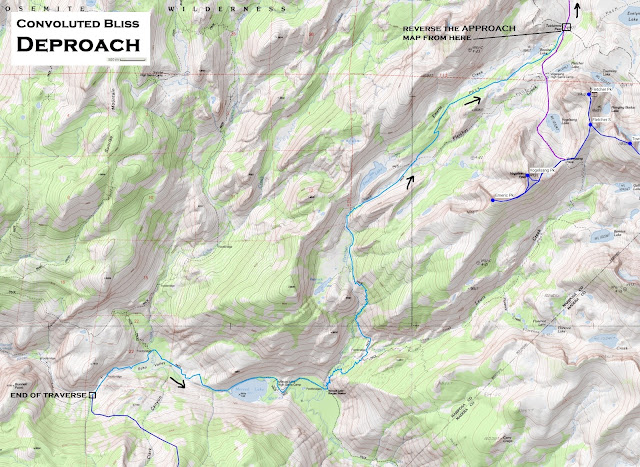 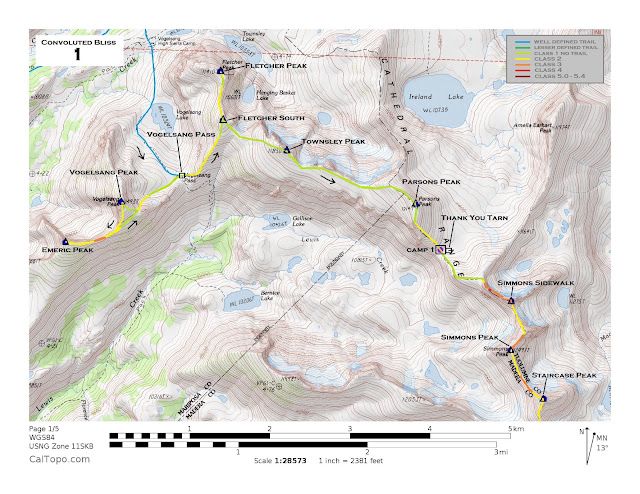 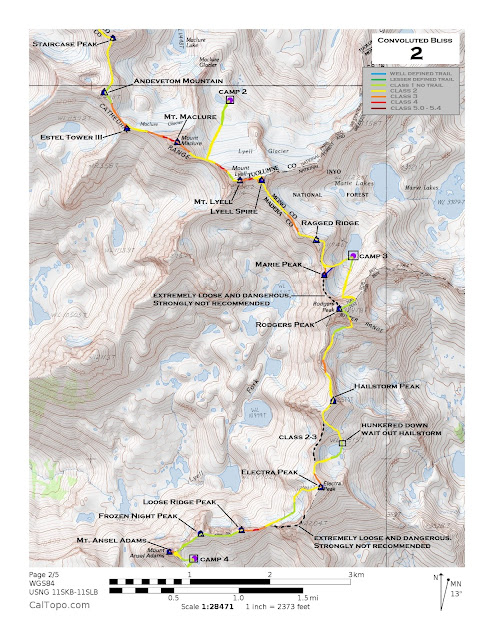 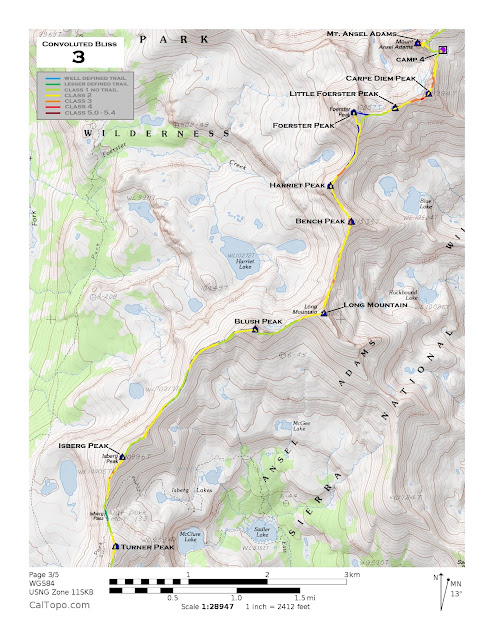 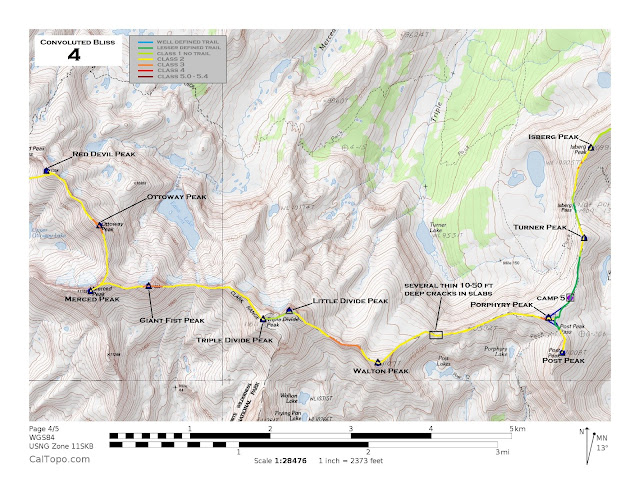 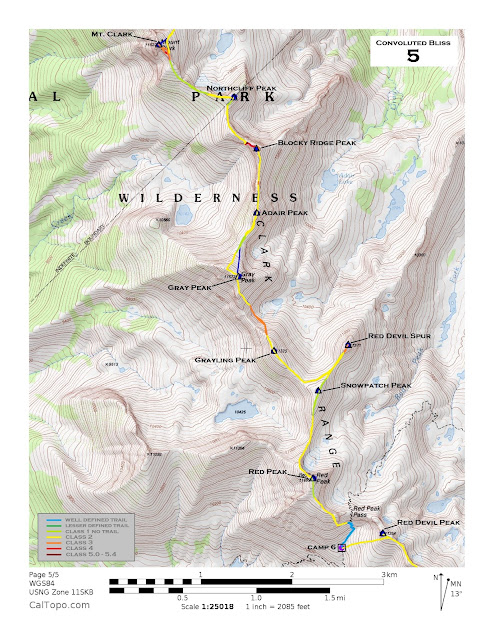 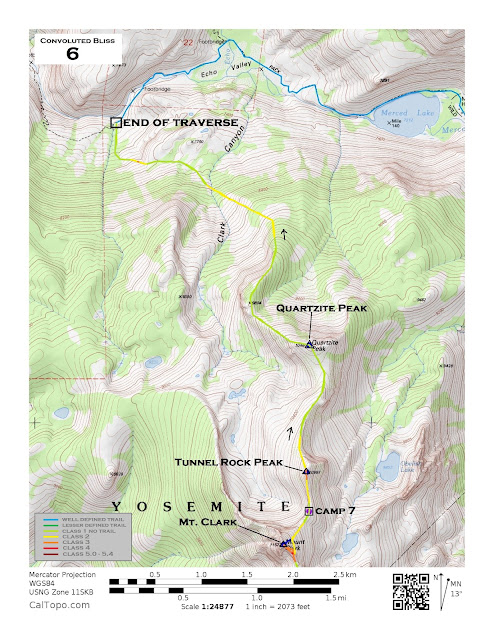