back to home page
Tom to Basin Traverse

June 25, 2016
Even at 6:40am as we began trudging across the desert, the temperature was already in the 80s and rising rapidly. With forecasted desert temperatures in the low 100s, we were eager to get as high as we could in the next few hours. Only a few linear miles to the southwest, Basin Mountain loomed over the Owens Valley. Although it appeared very close to us, we knew that it rose roughly 8,500 ft above us and would take the whole day to climb, especially with full packs. 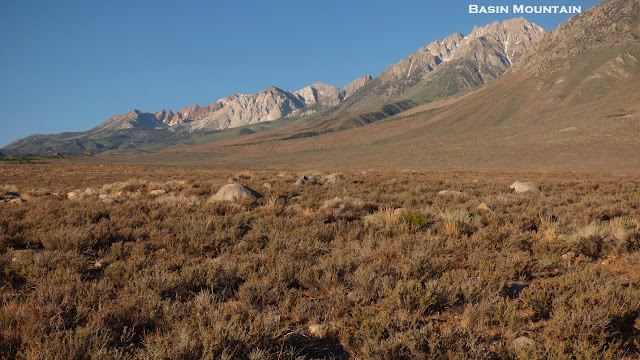 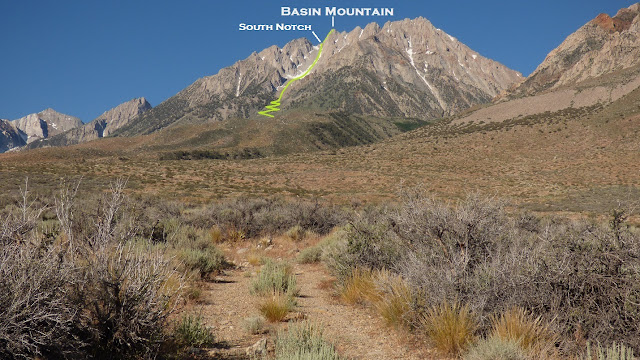 From the campground (4,980 ft), we took a series of old dirt roads roughly 4 miles southwest. Upon reaching Horton Creek, the road petered out (6,760 ft) and we prepared to cross Horton Creek, only to find it unusually swollen and extremely dangerous to cross. For the next few hours, we paralleled the creek upstream, trudging up sandy slopes littered with desert shrubbery, breathing in hot desert dust. At some point, the temperature rose up into the 90s, then began gradually dropping as we ascended more rapidly. 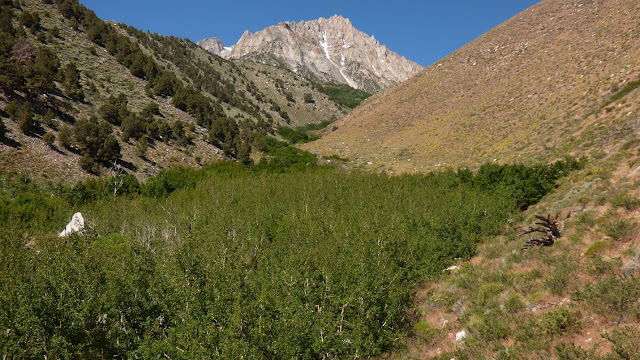 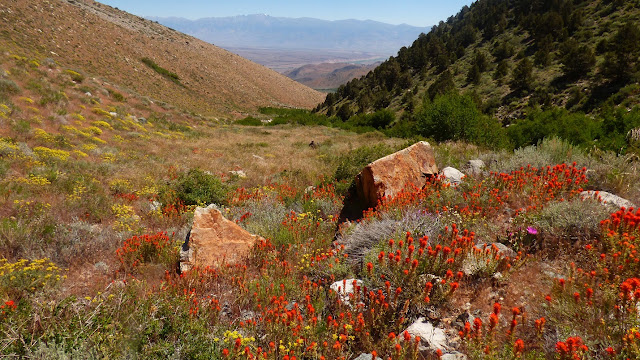 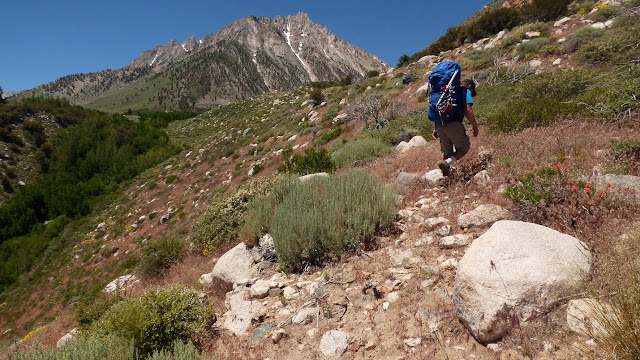 At 8,820 ft, we intersected the Horton Lakes Trail and thankfully were able to cross that awful creek via footbridge. From here, we glanced our first view of Gable Lakes Peak. 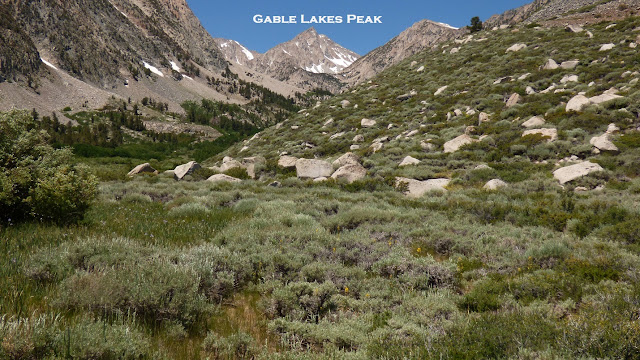 We followed the Horton Lakes Trail south for about half a mile, then left it and headed WSW, heading up Basin Mountain's east slopes. A faint old mining road appeared, switchbacking up to 10,560 ft before petering out at an old defunct mine. We were now high enough that the temperatures were comfortably in the 60s, and sat down for a long food break while studying the enormous East Couloir above. 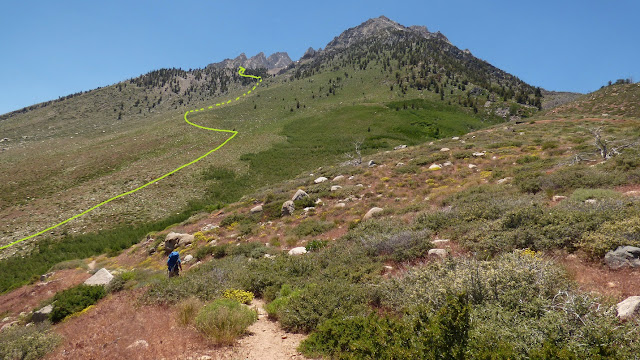 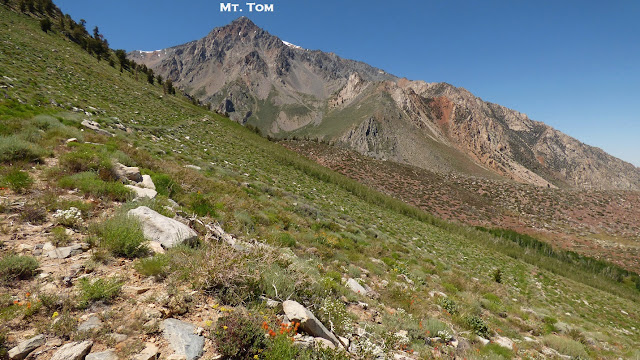 looking up the East Couloir 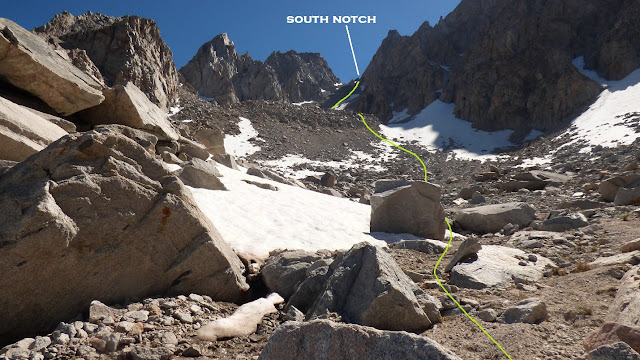 By 5pm, we were up and moving again, noting that a lot of the tediousness still lay ahead. Most of the couloir was devoid of snow, making for several hours of delicate scrambling on loose piles of crud. I was happy to encounter at least one several hundred foot section of snow, which did not posthole too bad while feeling much more pleasant than that awful scree. 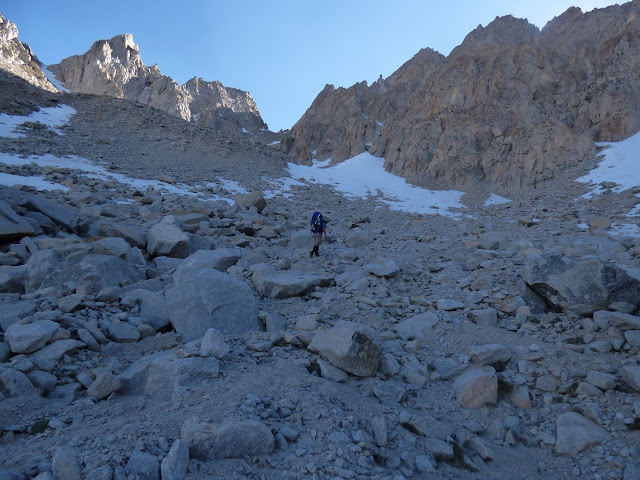 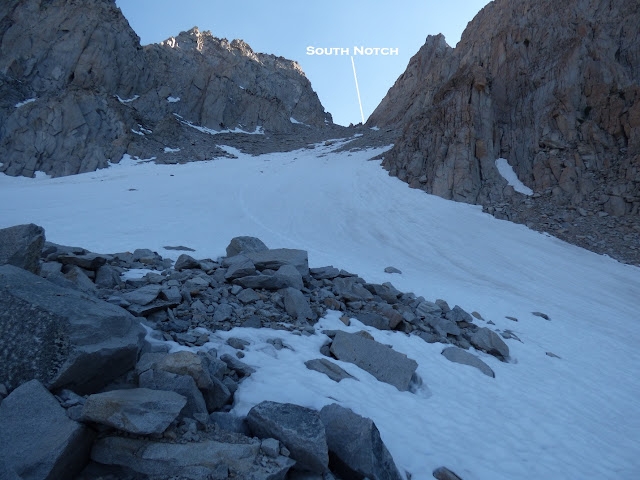 As the east couloir ended, we aimed for a high notch (South Notch) to the right (12,840 ft). This notch marked the transition from class 2 couloir to class 4 rock. We both climbed class 3 rock up and over the notch, and descended a few feet down the other side. I decided to head more left, climbing a series of class 5.4 cracks before cliffing out. After several attempts to climb any further up, all of which were stymied by difficult 5th class, I reversed the 5.4 cracks and traversed back right to join up with Mason's route, which headed directly up above South Notch. 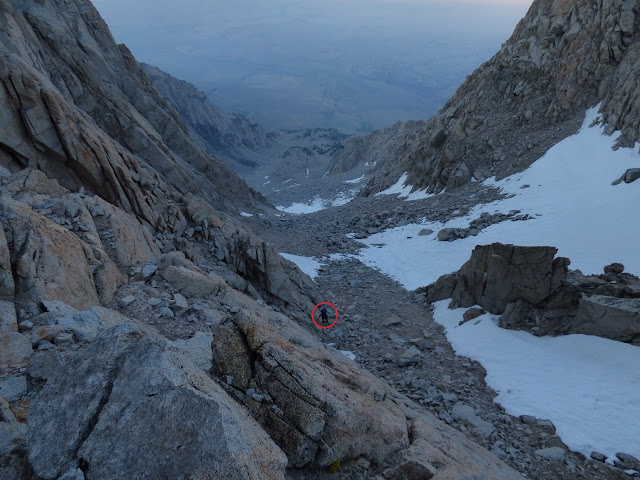 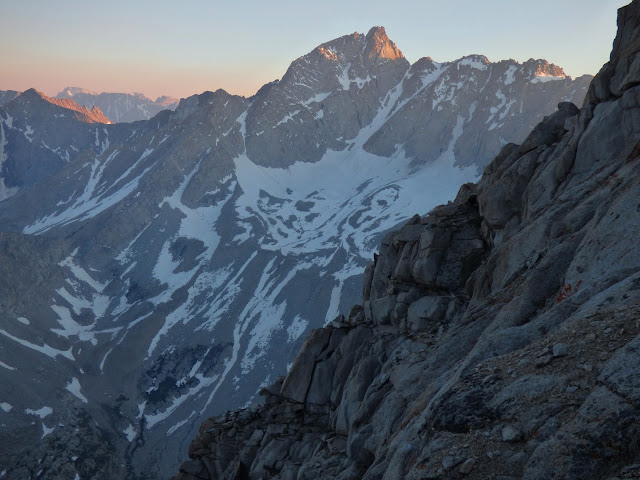 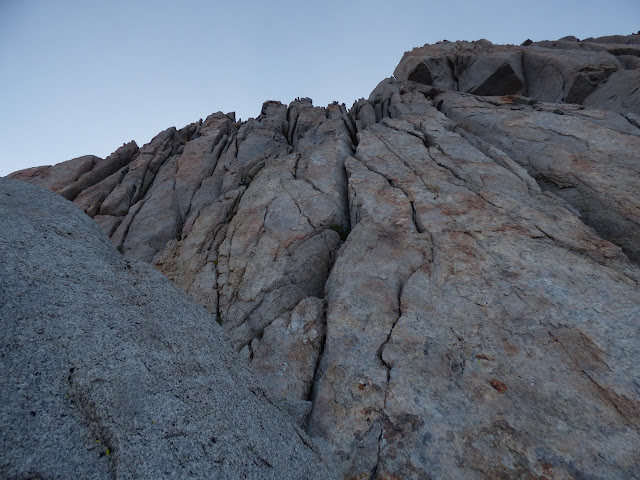 As the sun set, we found ourselves climbing a series of fun class 4 cracks and chimneys for several hundred feet. We were both pretty beat, and were hoping that the climbing would end with each chimney. It was getting dark fast, and class 4 with headlamps did not sound very fun. 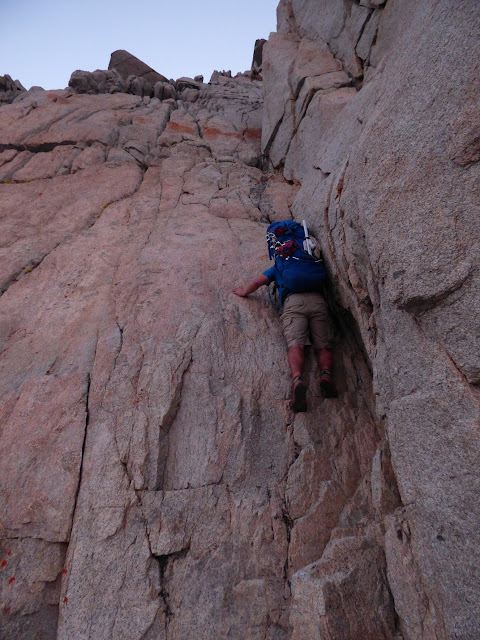 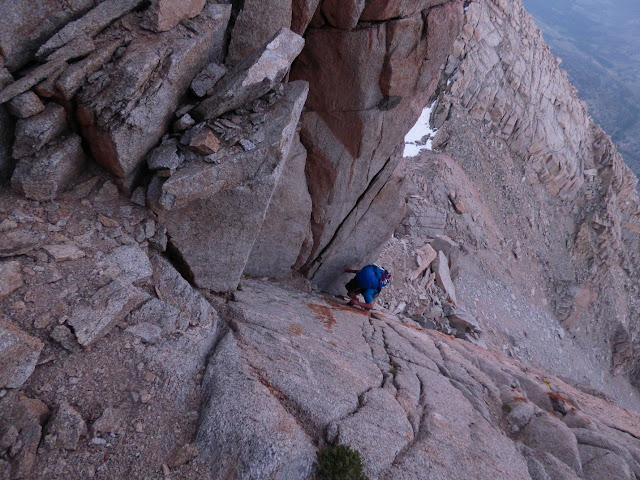 Eventually we noticed that we were only 100 ft below the summit, and saw a giant slabby class 3 ledge system wrapping around to the west, leading towards a small and relatively comfortable looking notch (13,100 ft) just west of the peak. We took the ledge to this notch, finding level ground and packed dirt. 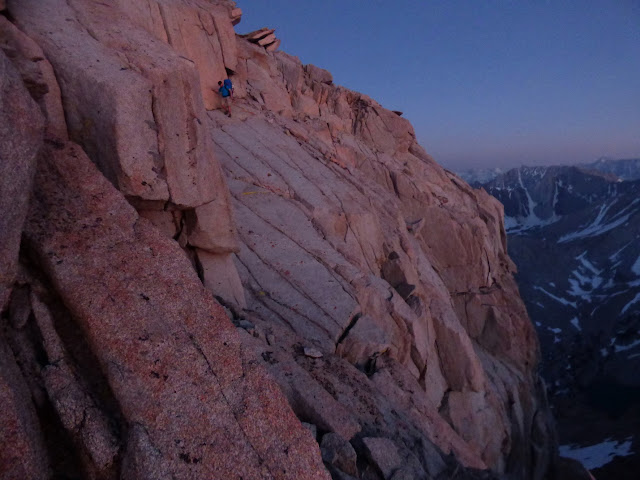 It was already 9pm, and we quickly began setting up camp by headlamp. Mason felt extremely beat, and fell asleep right away after setting up his tent. I grabbed the stove and spent 30 minutes getting water out of a nearby snowfield, feeling like I could fall asleep at any moment. I heated up some food, reluctantly forced it down, and headed off to sleep by 10:30pm.