June 16-18, 2015
The Glacier Divide is a 11.5-mile ridge extending west of the Sierra Crest just south of Humphreys Basin in the central High Sierra. Rising above 13,000 ft and containing several small glaciers on its northern side, the Glacier Divide is a classic High Sierra ridge. It is a well known ridge among pass enthusiasts who will cross the Glacier Divide in order to get between Evolution Valley and Paiute Canyon. As far as traversing went, large sections of the Glacier Divide had been traversed, but a continuous traverse of the entire range in one push had not been done. The blocky granite nature of the ridge makes it tedious and tiring to traverse, but the spectacular views and amazing sections of climbing make up for that.

In 2013, I found out about the Glacier Divide and plotted a tentative map of a continuous traverse across its crest, starting from Wonder Point to the east and ending at Pavilion Dome to the west. The two easternmost peaks (Wonder Point and Wishbone Point) were not actually part of the Glacier Divide, but they looked fun and their ridges connected to the Glacier Divide, so I threw those in there anyway. The actual geological Glacier Divide begins where it joins the Sierra Crest at Mt. Marshall and Keyhole Plateau.

In 2013 and 2014 I was planned to attempt the Glacier Divide with two different groups, but both attempts ended up getting cancelled at the last minute, the first time due to a late season snowstorm and the second time due to my partner getting second thoughts at the last minute and freaking out at the prospect of traversing the thing. Finally in May 2015, Mason and I headed over to the Glacier Divide to attempt the first ascent. Apart from the poor snow conditions, all was good until we got to Wonder Point. Shortly after Wonder Point was a 80-90 ft drop of what looked like class 5.7 downclimbing. With a foot of fresh snow, clunky boots, and no rope, we decided to bail off the ridge. In June 2015 we were once again in the area after failing a large traverse in Yosemite, so as consolation we headed over to re-attempt the Glacier Divide Traverse.

The route plan was pretty much the same route I had plotted out in 2013. We would start at North Lake Trailhead, take the Lamarck Lakes trail 2.5 miles to Upper Lamarck Lake, then head northwest to access the beginning of the traverse. From there, the traverse was pretty obvious, following the ridge westward until we hit its western terminus at Pavilion Dome. Our total climbing distance on the ridge would turn out to be around 19 miles. In order to exit the ridge, we would head back east a little ways to Lobe Pass, then descend to the north, hit the trail in Paiute Canyon, then follow it east for 9.6 miles over Paiute Pass and back to North Lake. 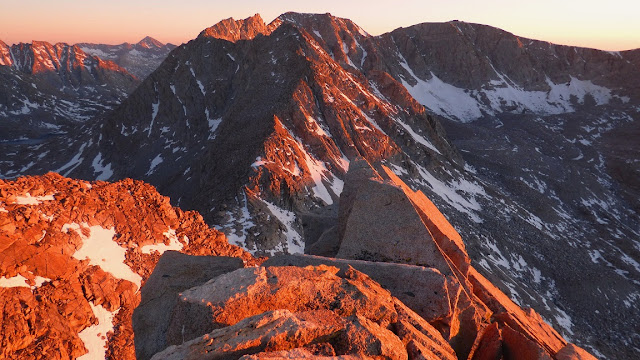 The table below includes every peak (from east to west) on the Glacier Divide Traverse. For unnamed peaks, I have dubbed names for them which are mostly derived from the names of nearby passes and landmarks. These dubbed names are in quotes. Peaks without quotes are either officially named by the USGS or were found named by previous parties who had written them in summit registers.