back to day 2
home page

February 16, 2015
Dawn found me once again rummaging around, folding up the tent, and stuffing everything into my pack before gazing out at the remainder of the traverse. With only two peaks remaining, I was nearing its end. 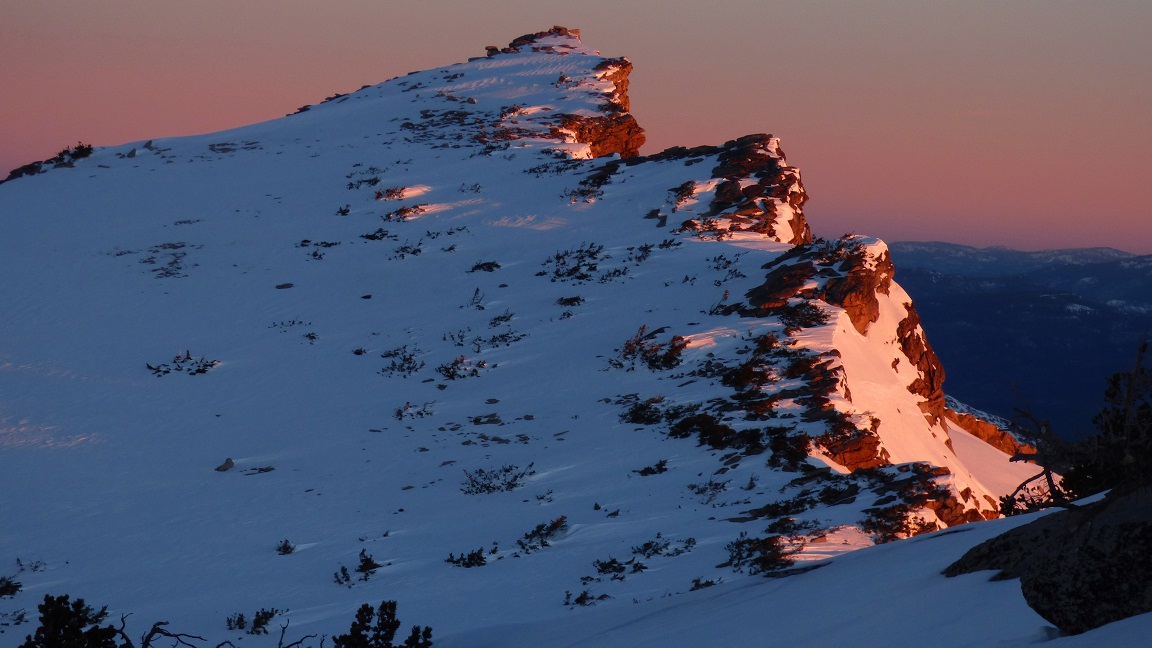 I descended Mt. Agassiz by going through one of several notches south of the summit block, then followed the obvious class 1-2 ridge towards Aarons Peak.

the remainder of the traverse 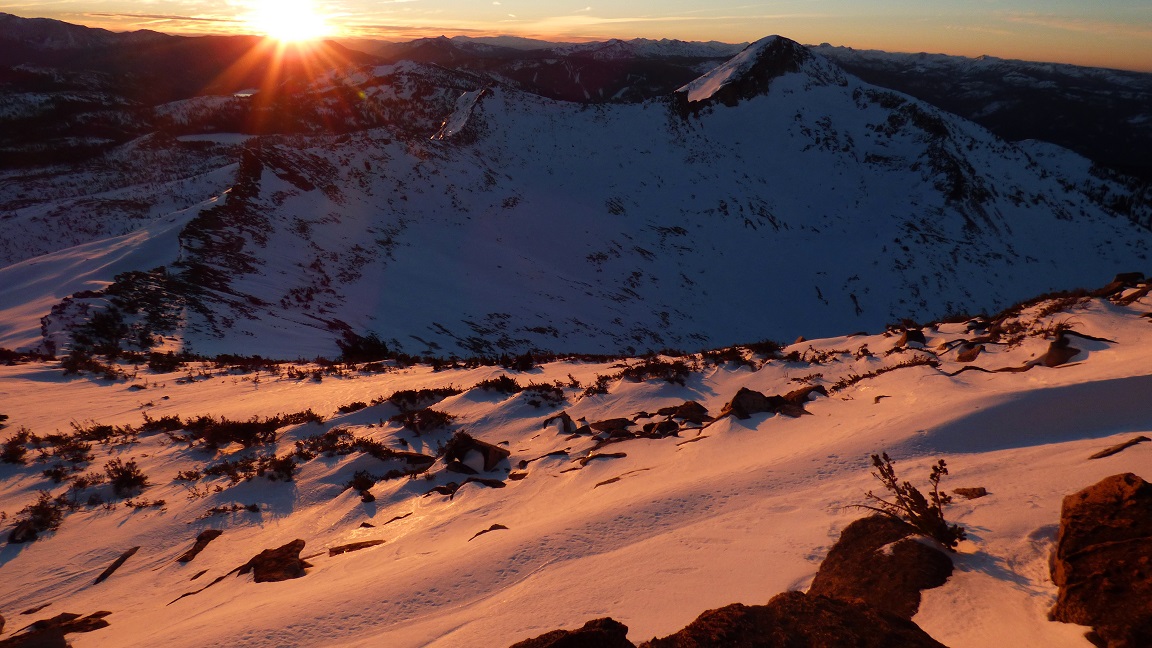 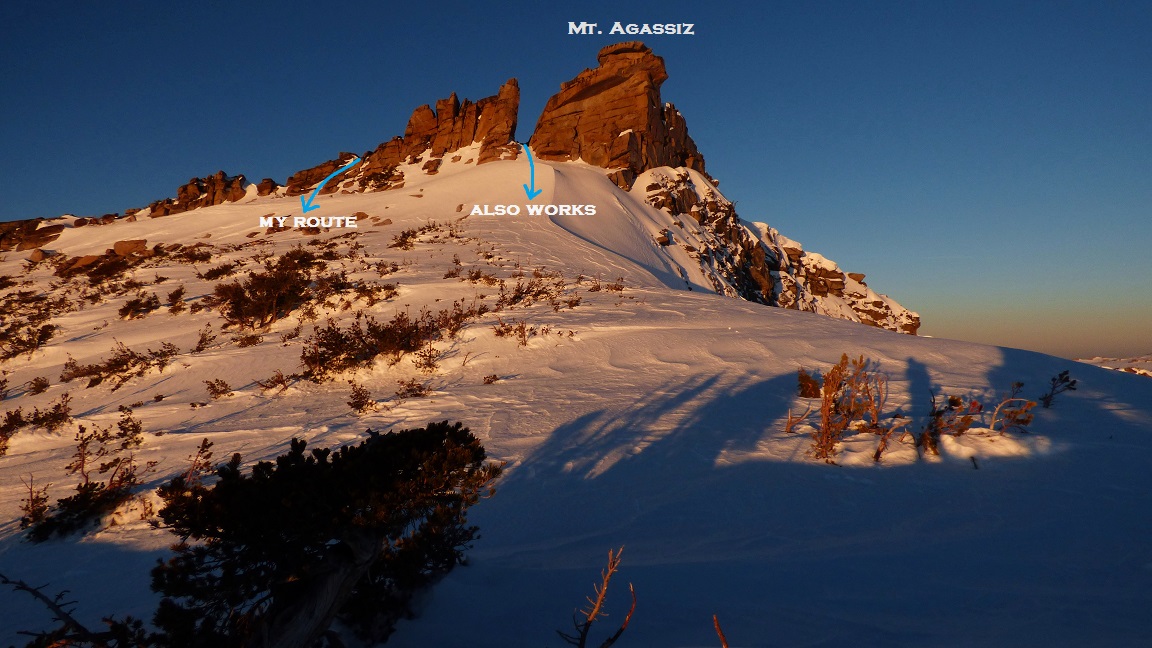 views between Agassiz and Aarons 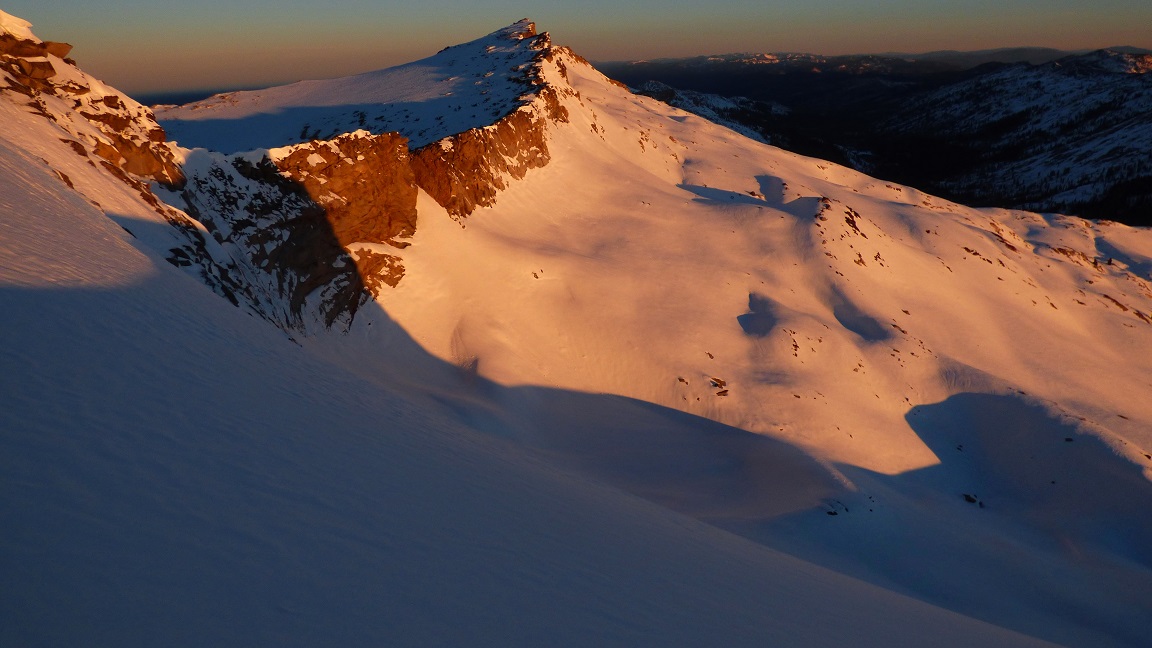 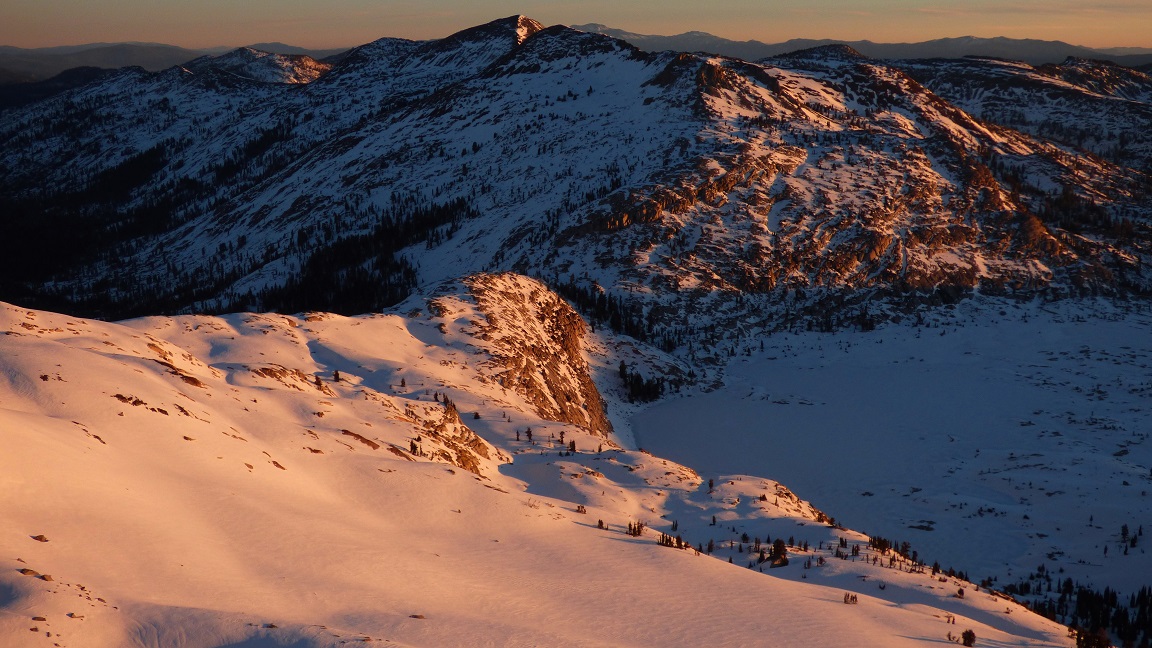 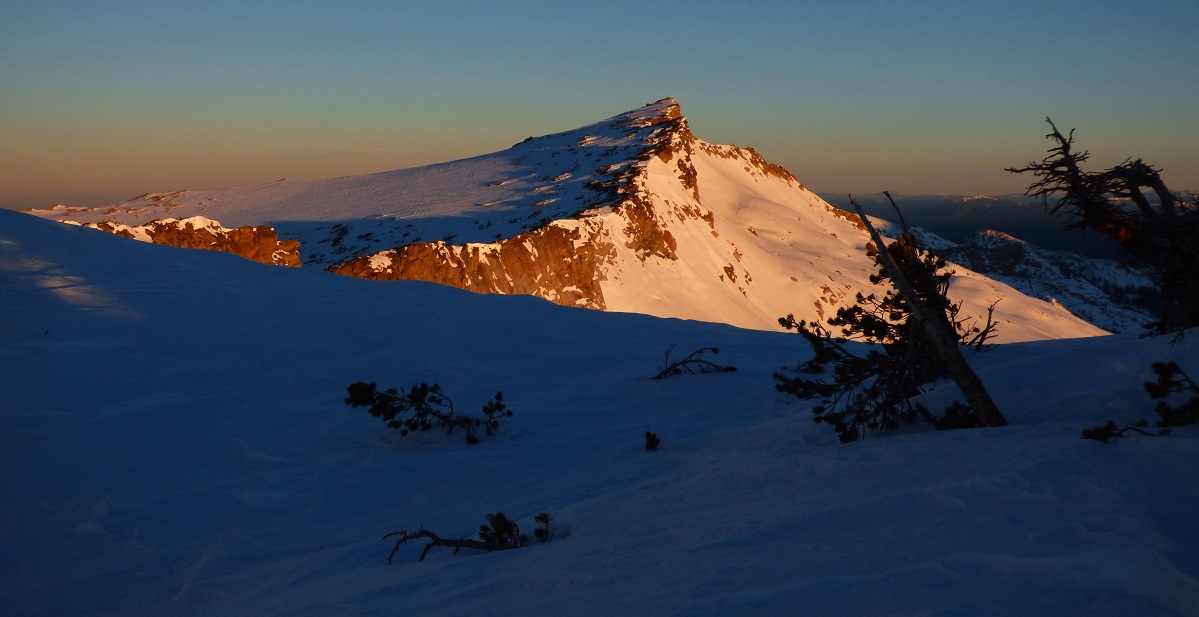 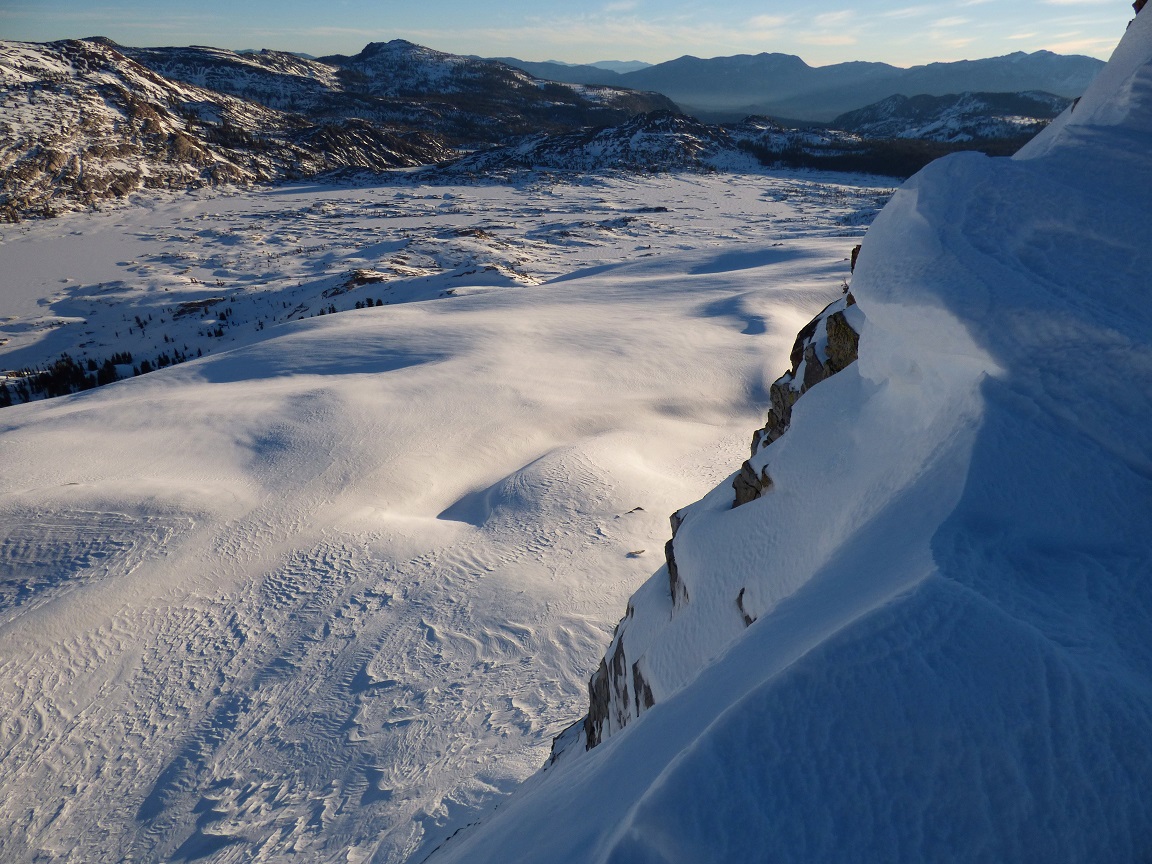 The northwest ridge of Aarons looked technical at first, but looked easier as I climbed closer to it. The ridge crest itself was made of a series of large icy boulders. Just west (right) of them were a series of steep snowfields which I used as a bypass. Before I knew it, I was already standing on the summit, gazing over at the massive profile of Pyramid Peak. 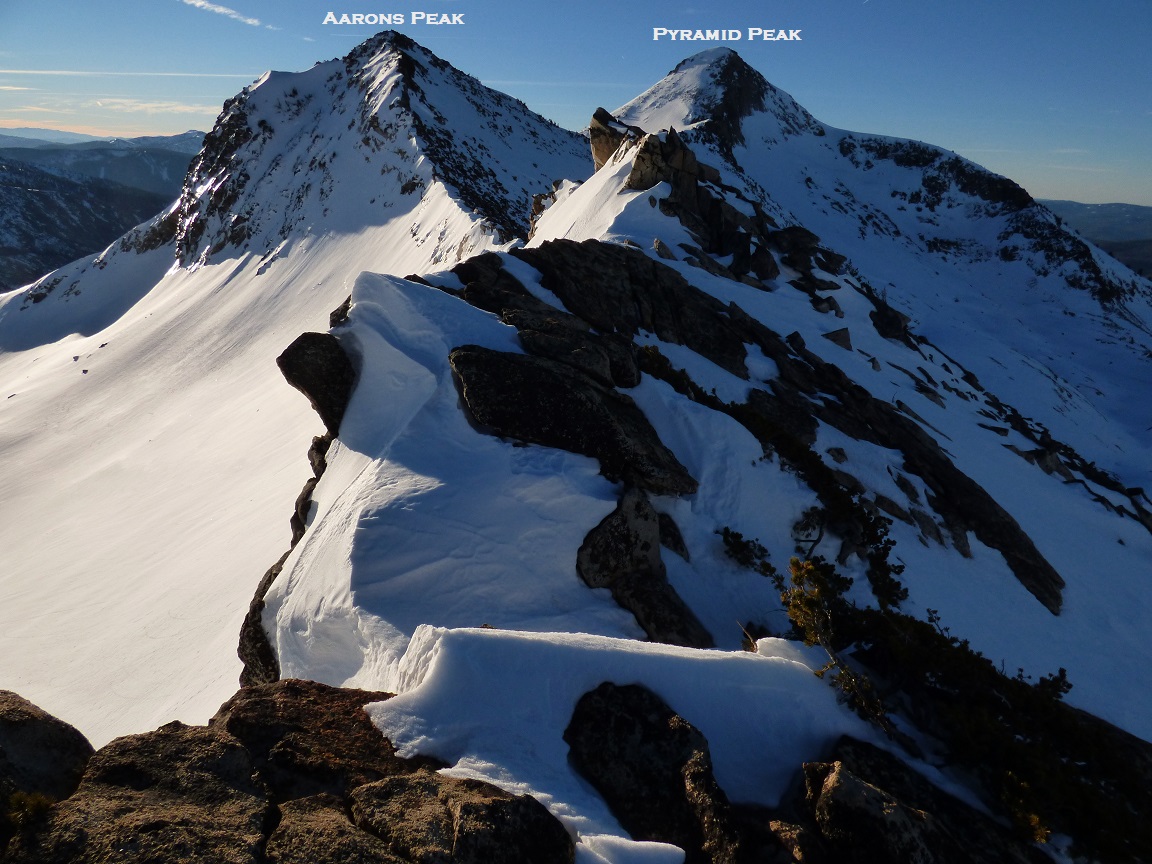 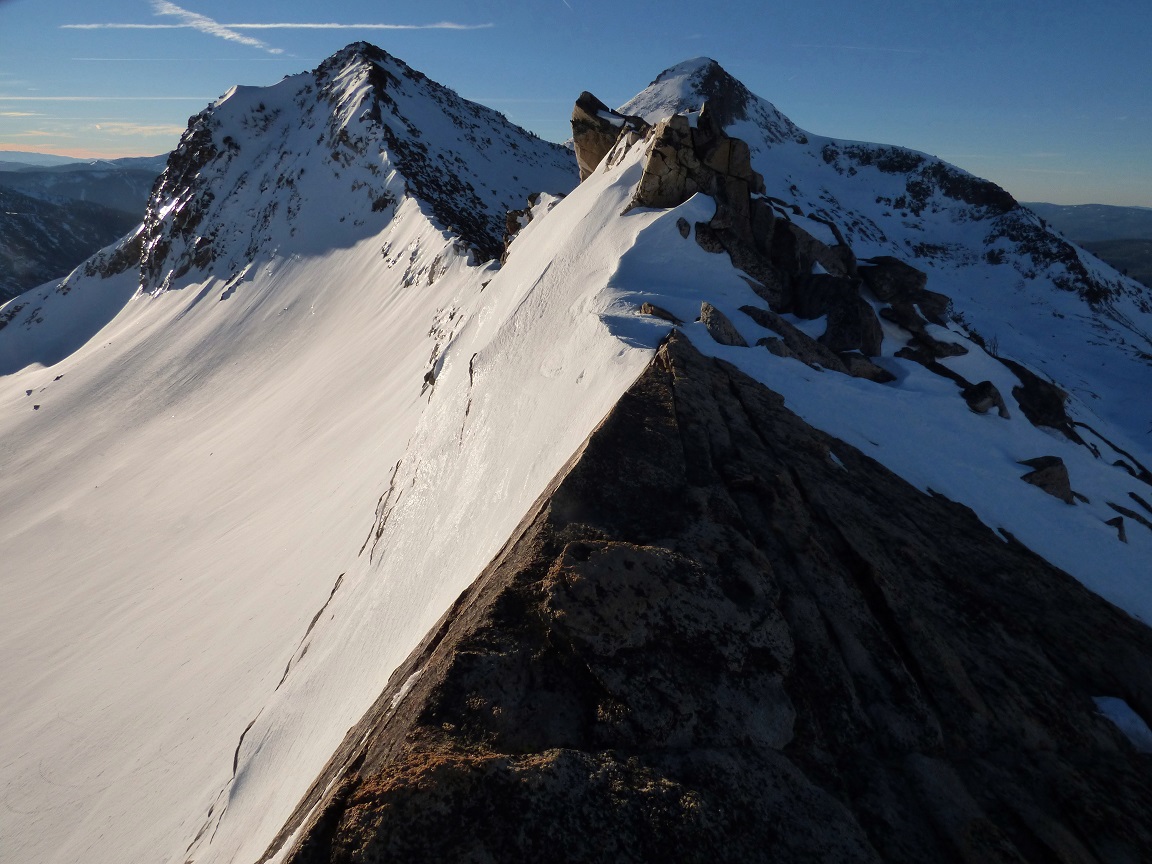 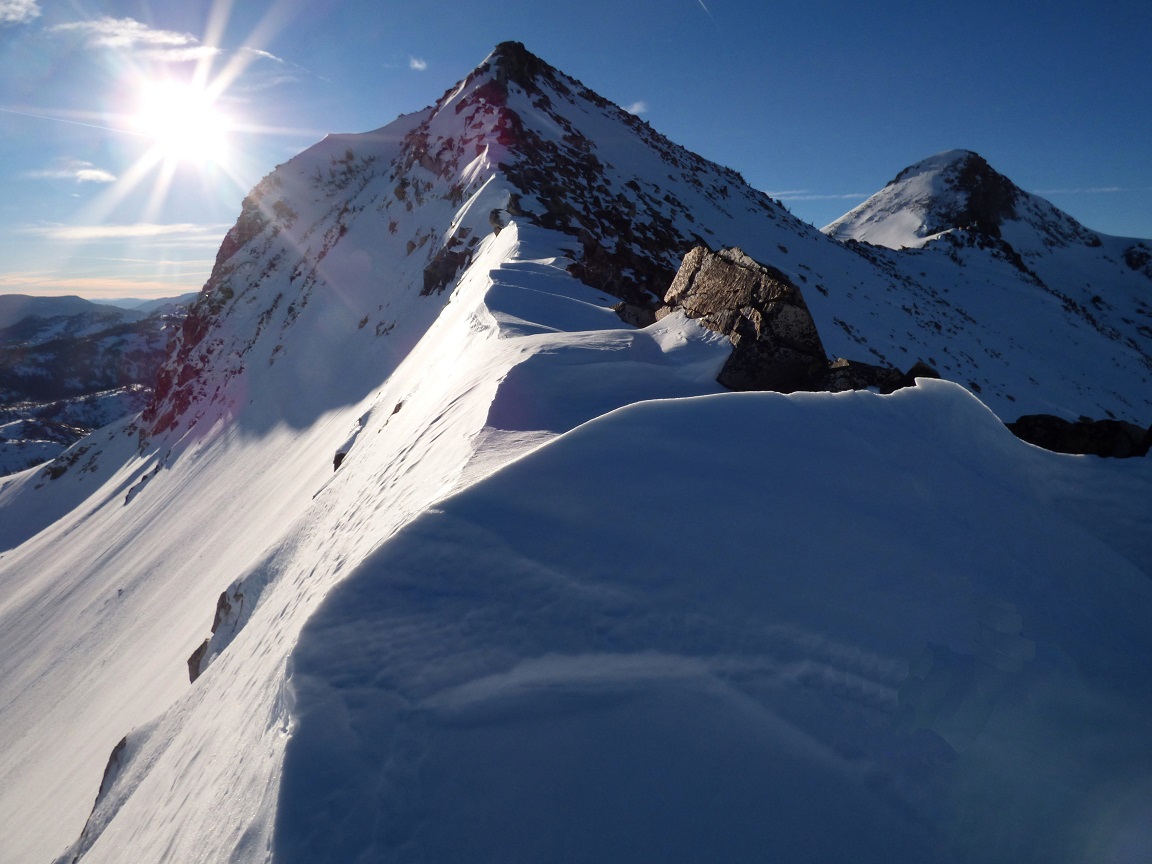 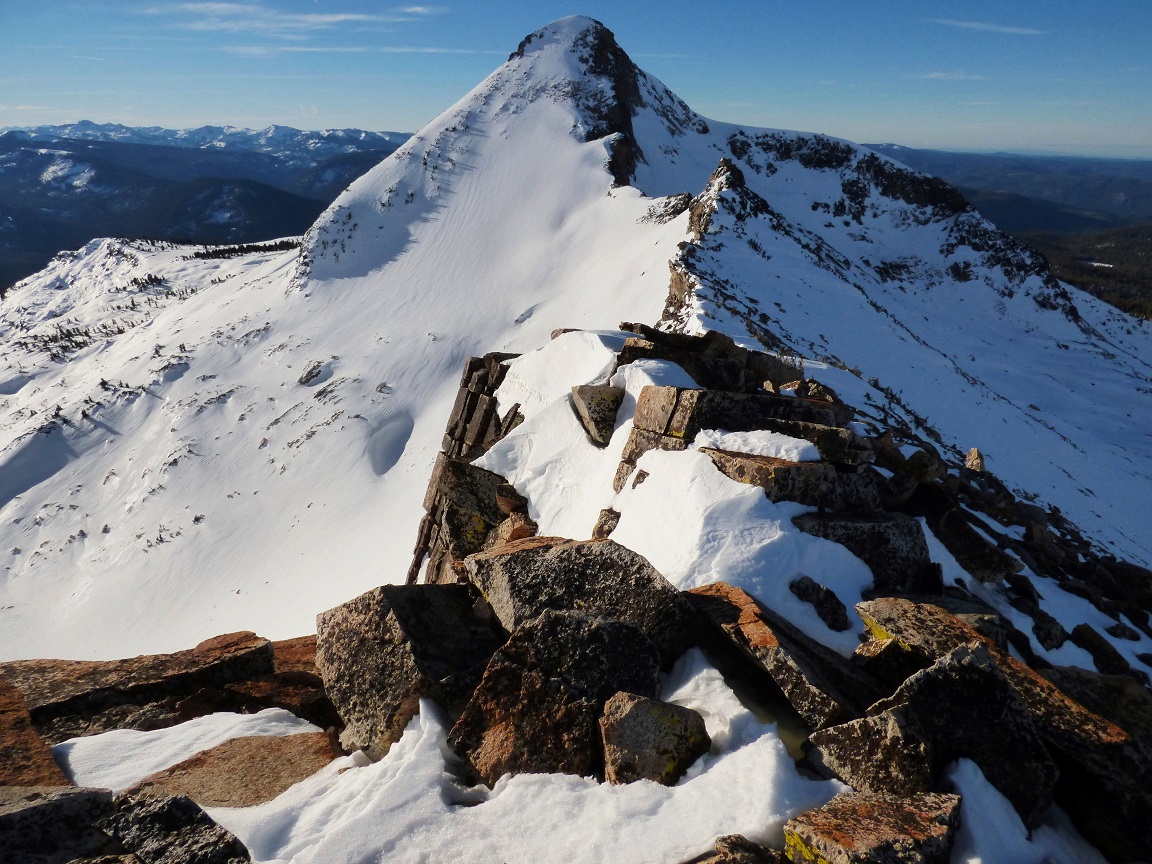 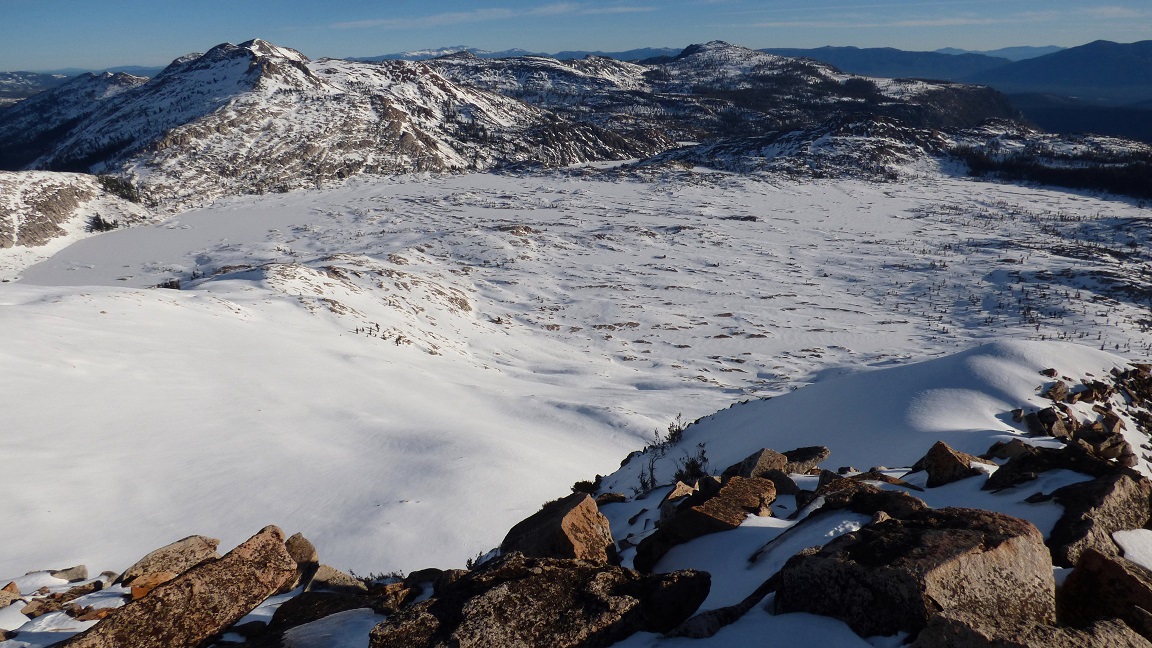 I remained on the summit for a few minutes before continuing towards Pyramid. The next part of the ridge, although narrow in places, surprisingly did not contain much cornice activity. Shortly after Aarons Peak, the ridge cliffed out, but I was able to find a class 3 bypass on its eastern (left) side, which dropped me down to the lowpoint between Aarons and Pyramid. From there, it was simply one step in front of the other up to the summit of Pyramid via its north ridge, which felt more like a face. 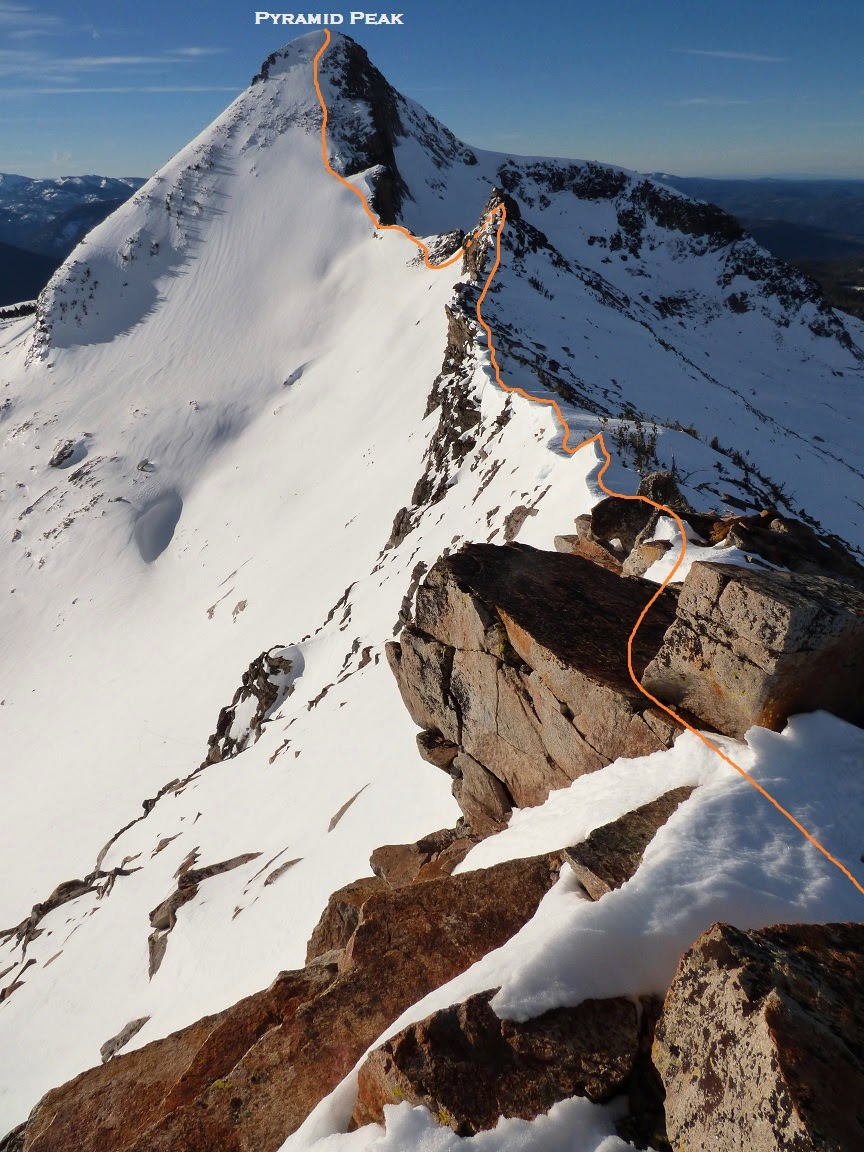 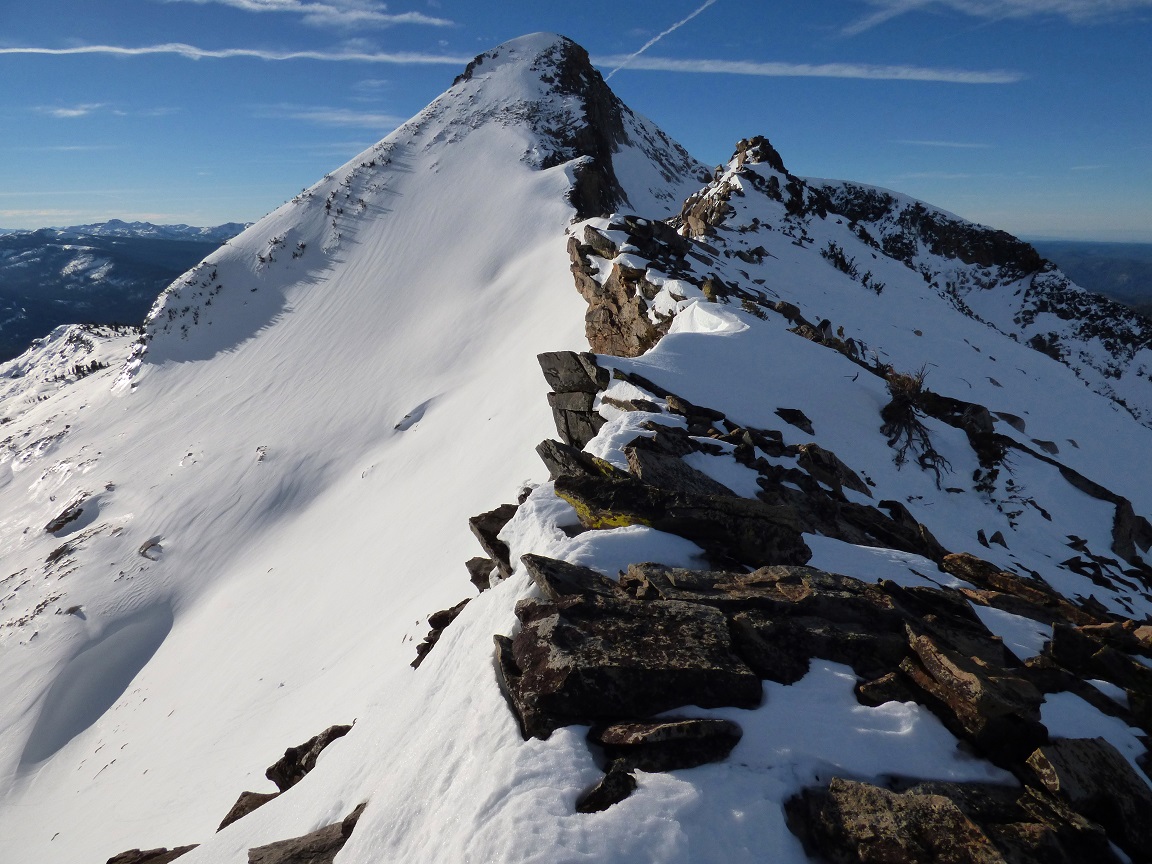 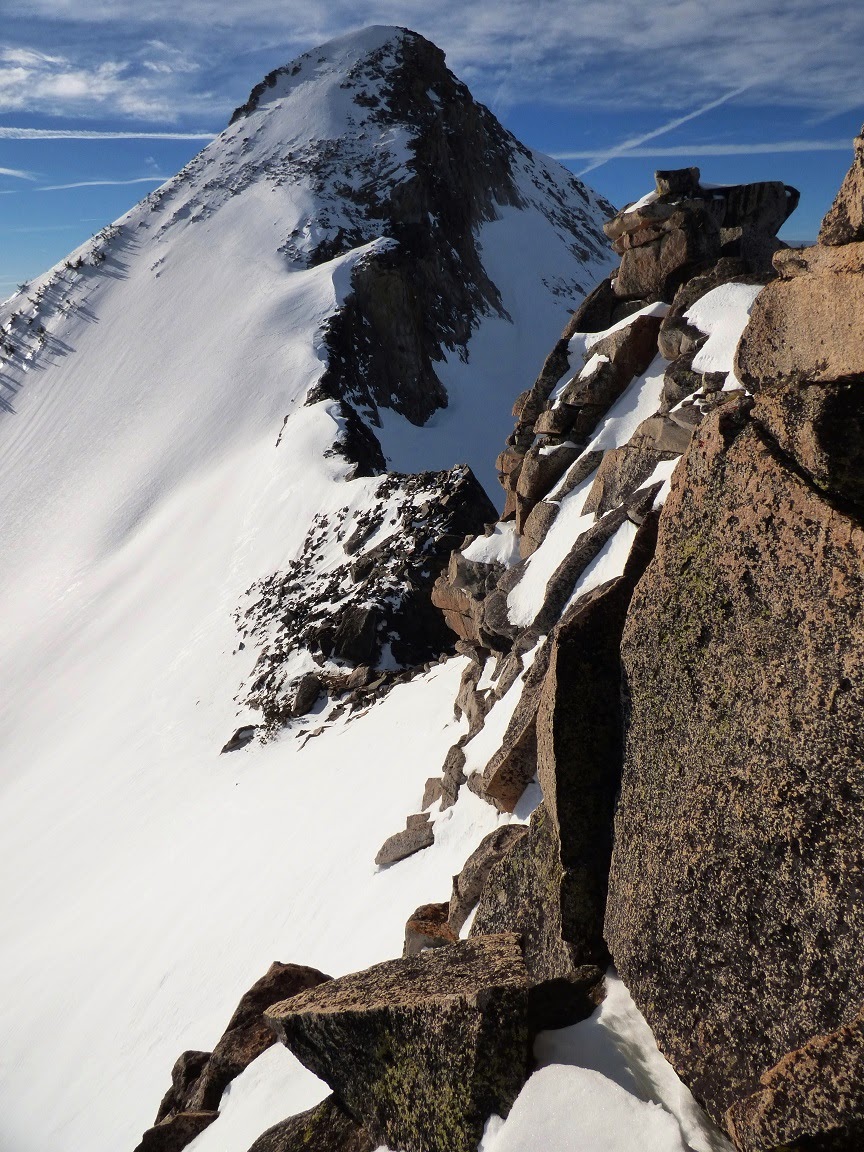 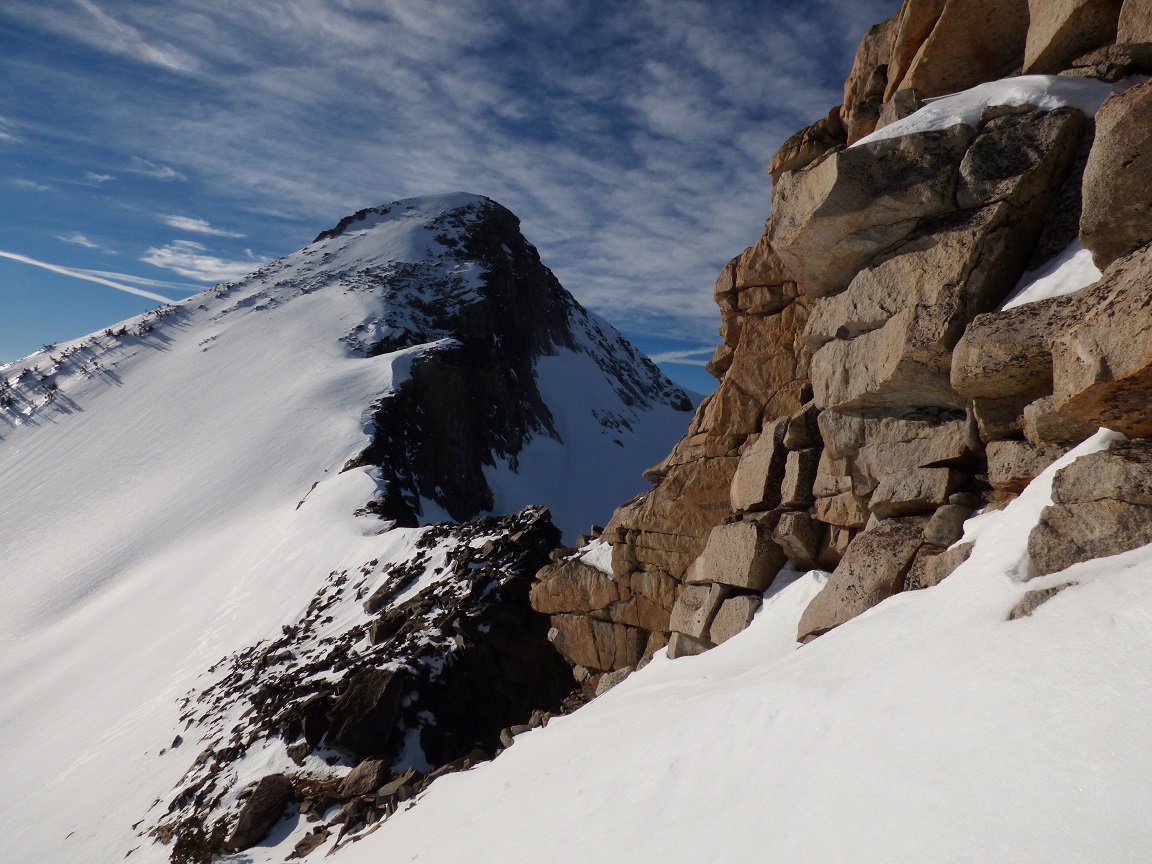 looking back up at the bypass 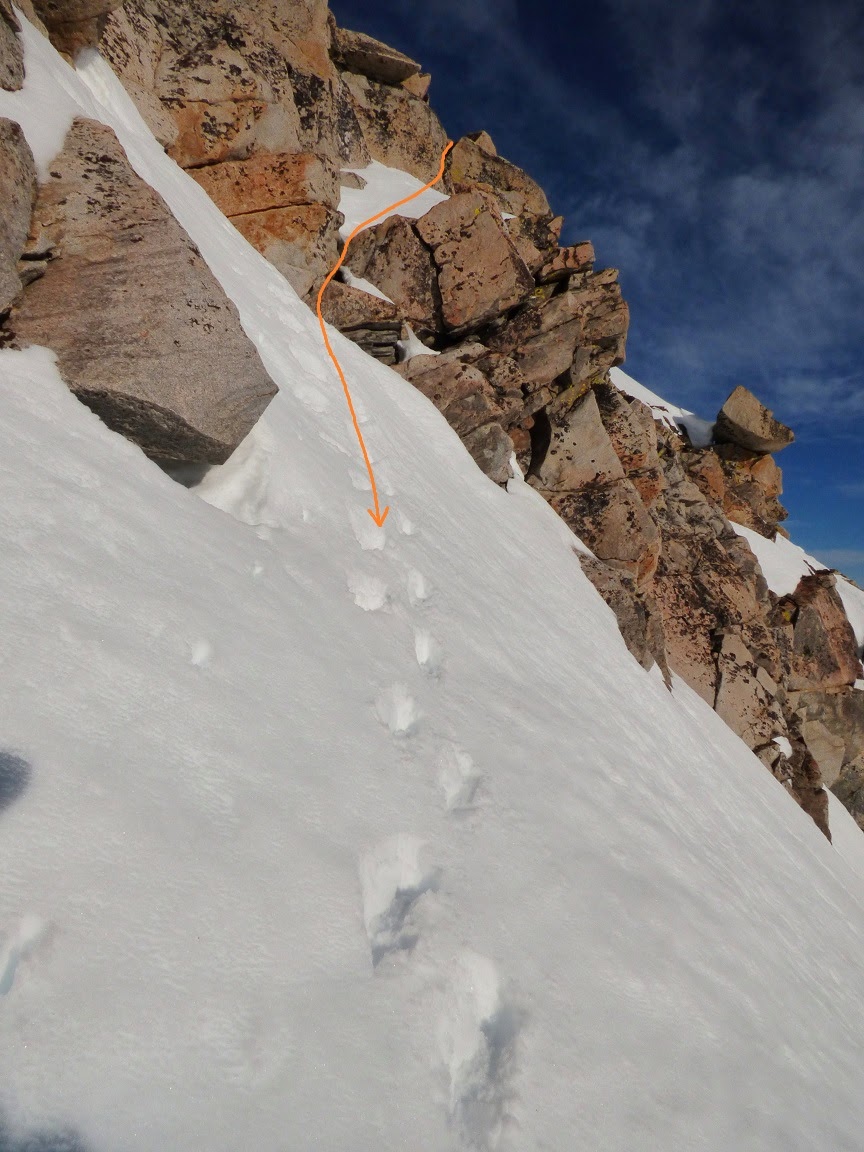 The snow on Pyramid's north ridge would transition from solid to icy to postholing every few steps. At times, it felt like I was climbing some kind of giant ice cap. A steady wind blew across the slope, swirling bits of powder all around me. The large white dome-shaped summit grew closer and closer. The angle of the slope gradually eased. I topped out at the summit at around 9:15am, and let out the loudest scream of joy that I possibly could. The Crystal Range had been traversed at last! 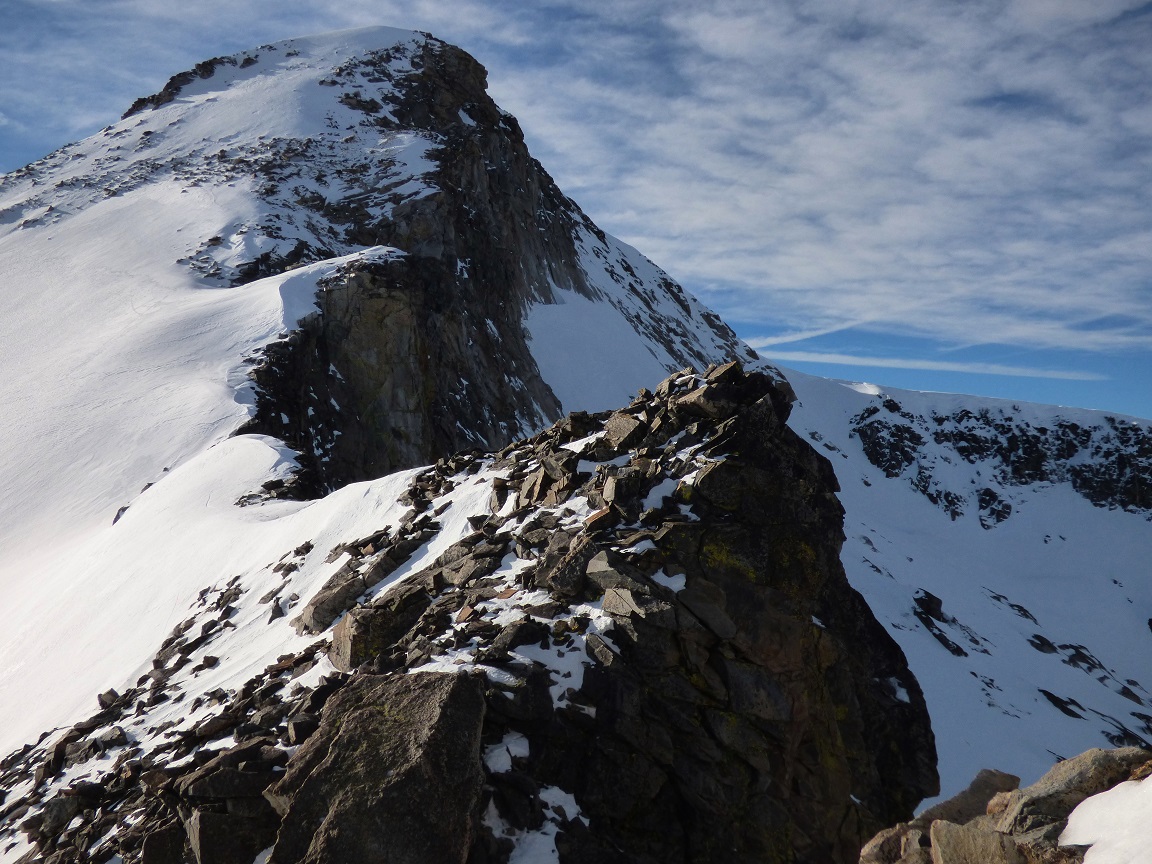 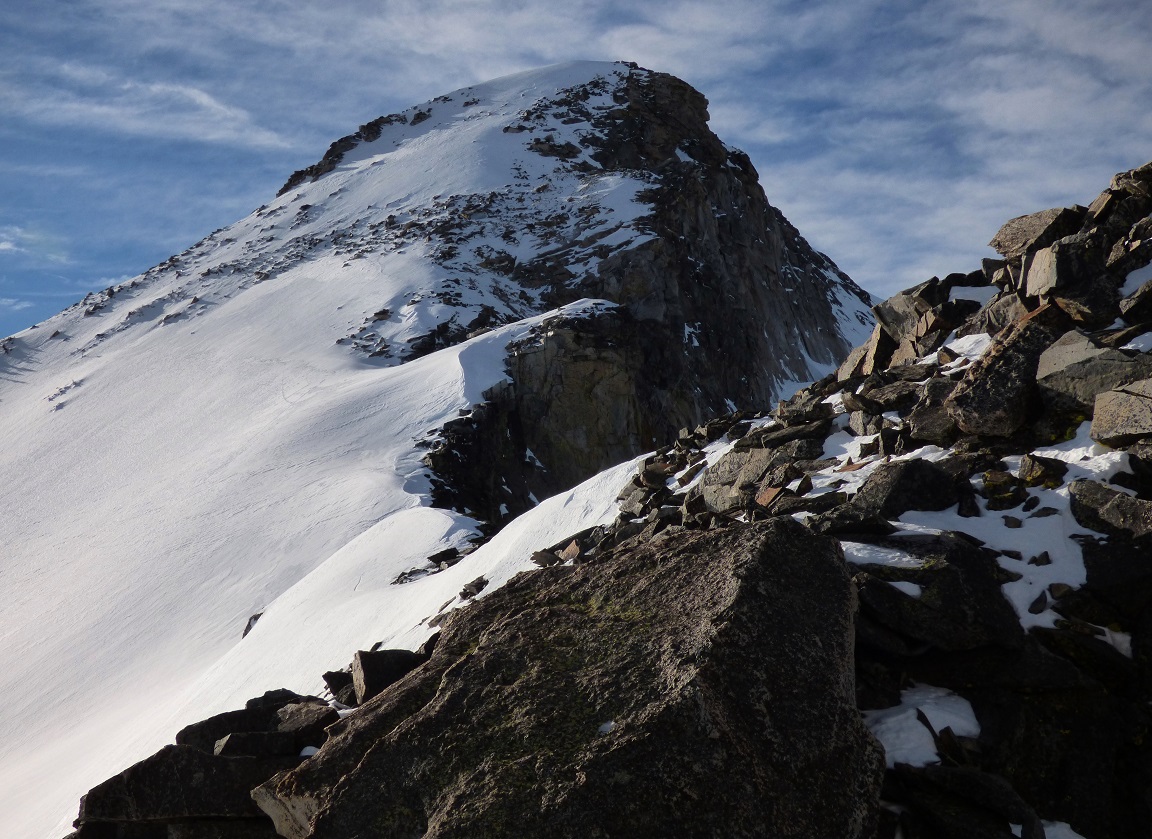 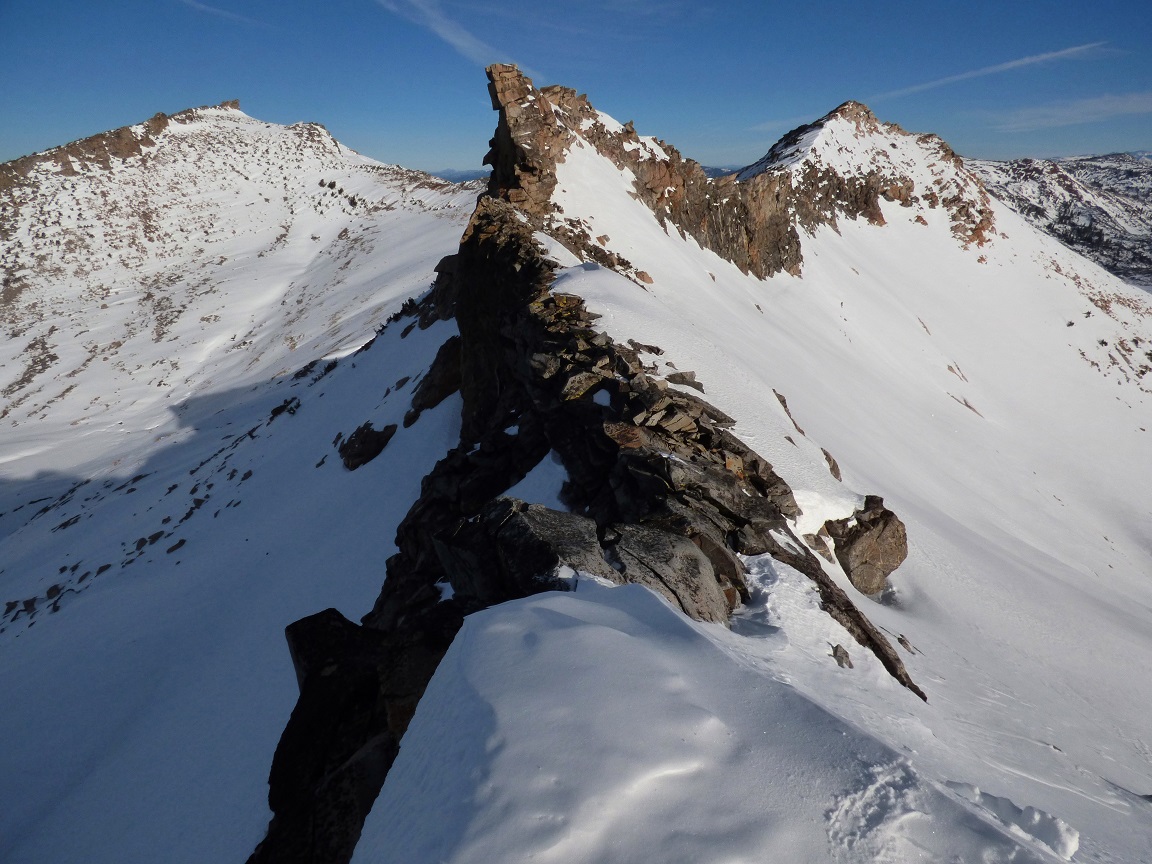 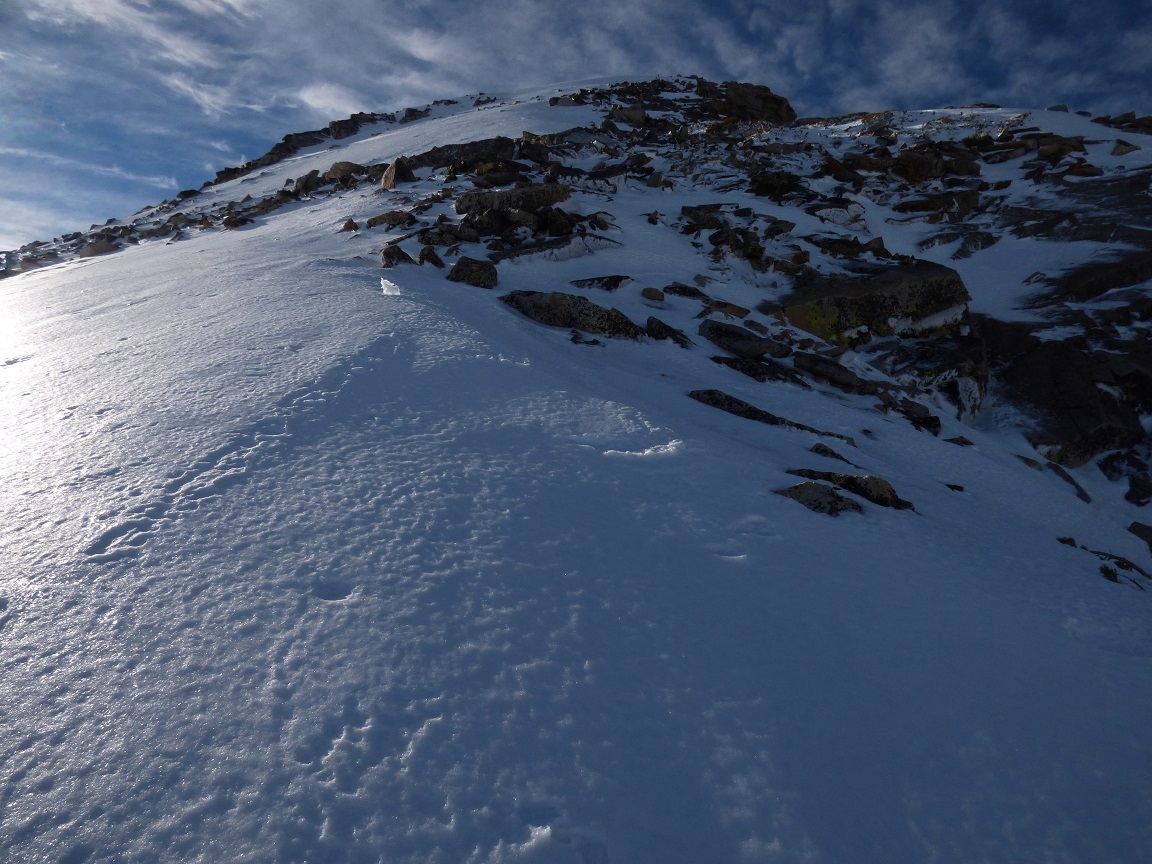 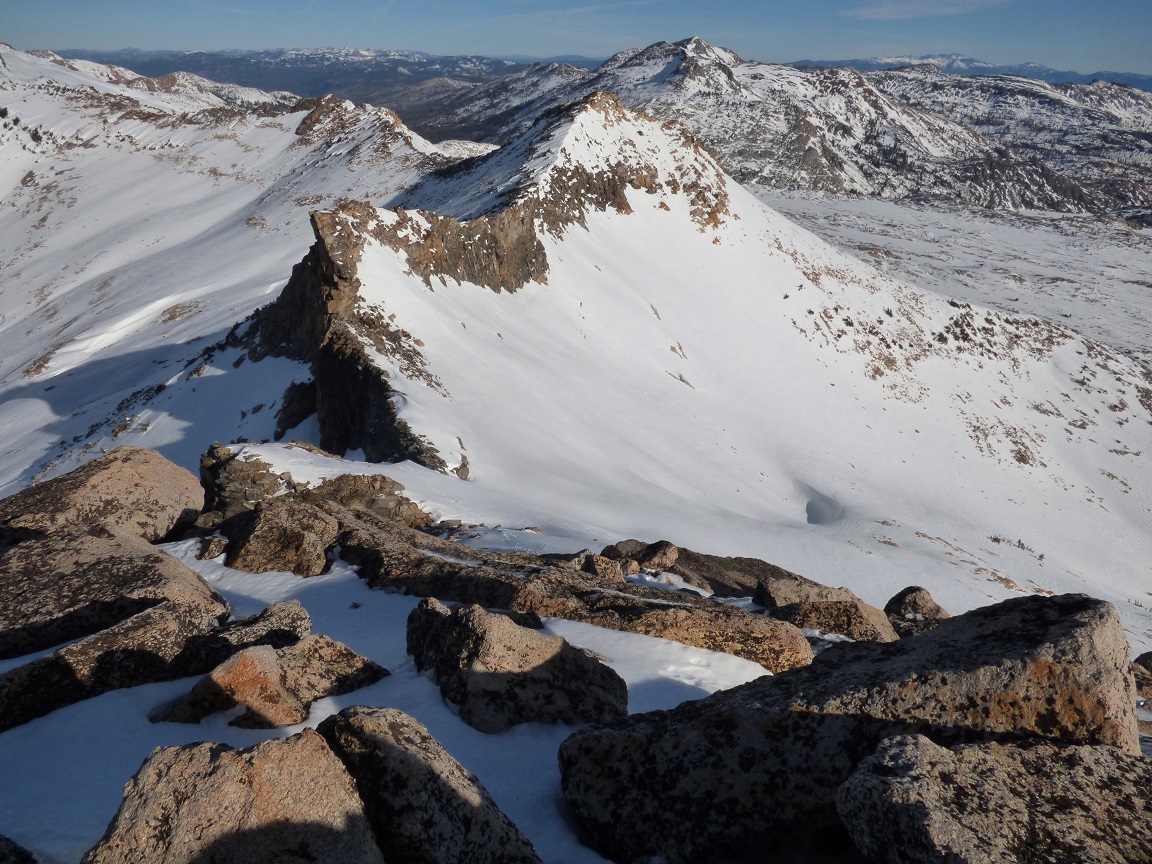 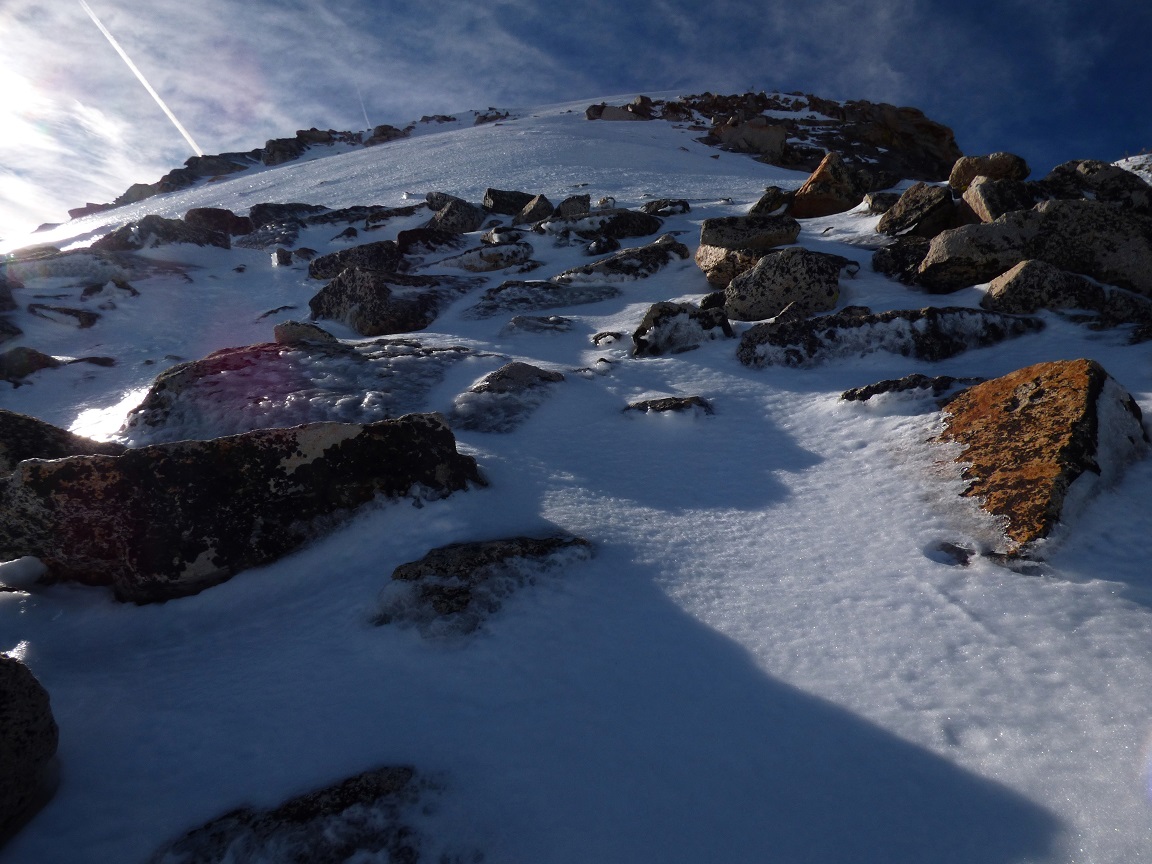 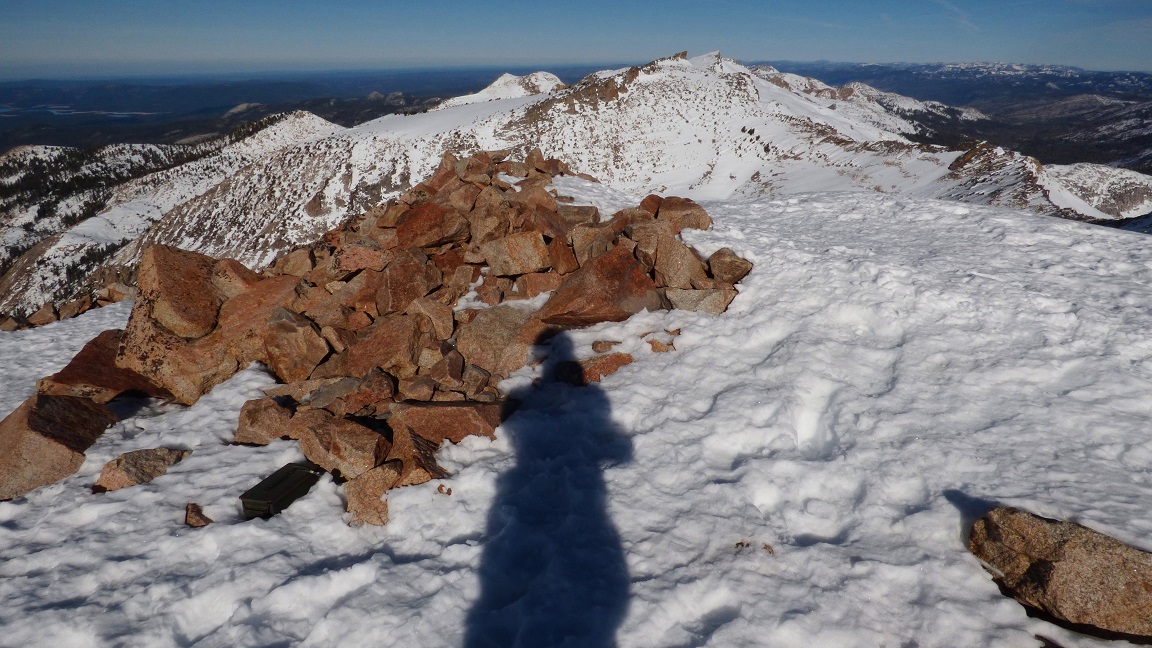 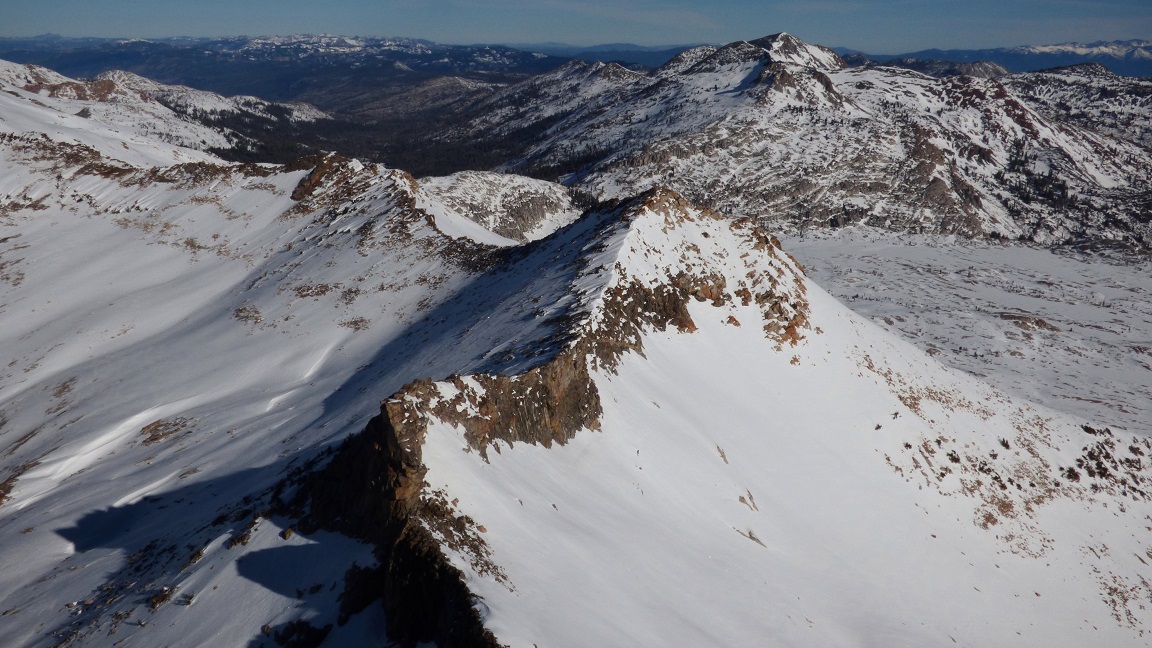 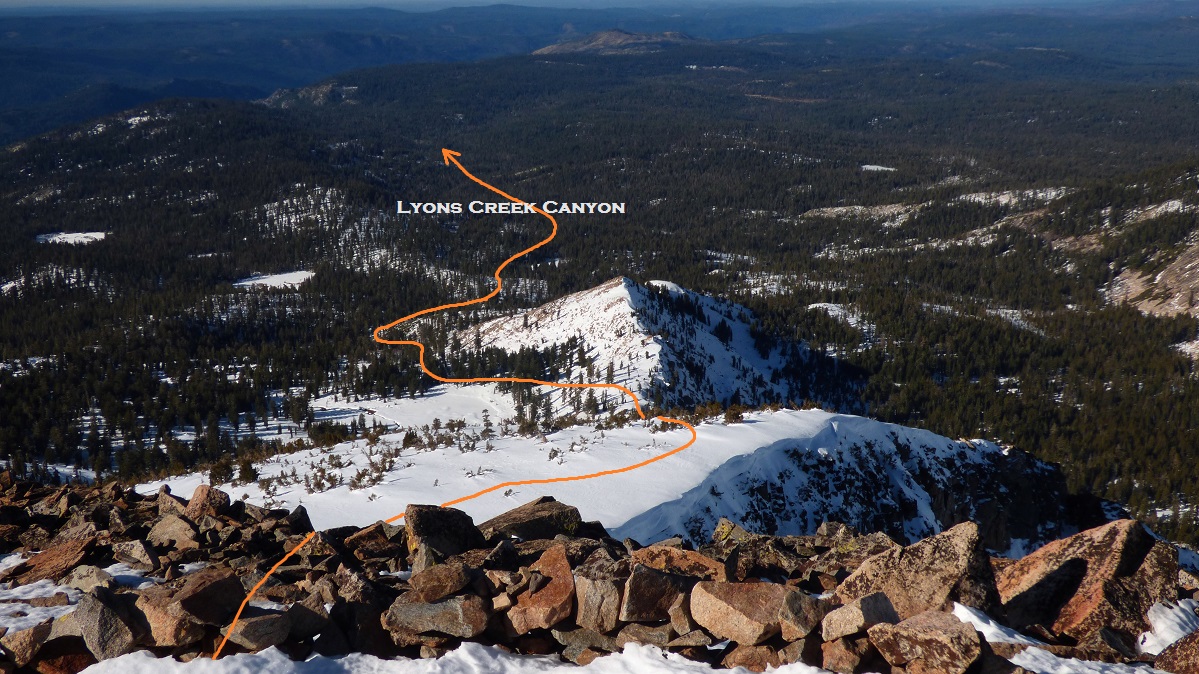 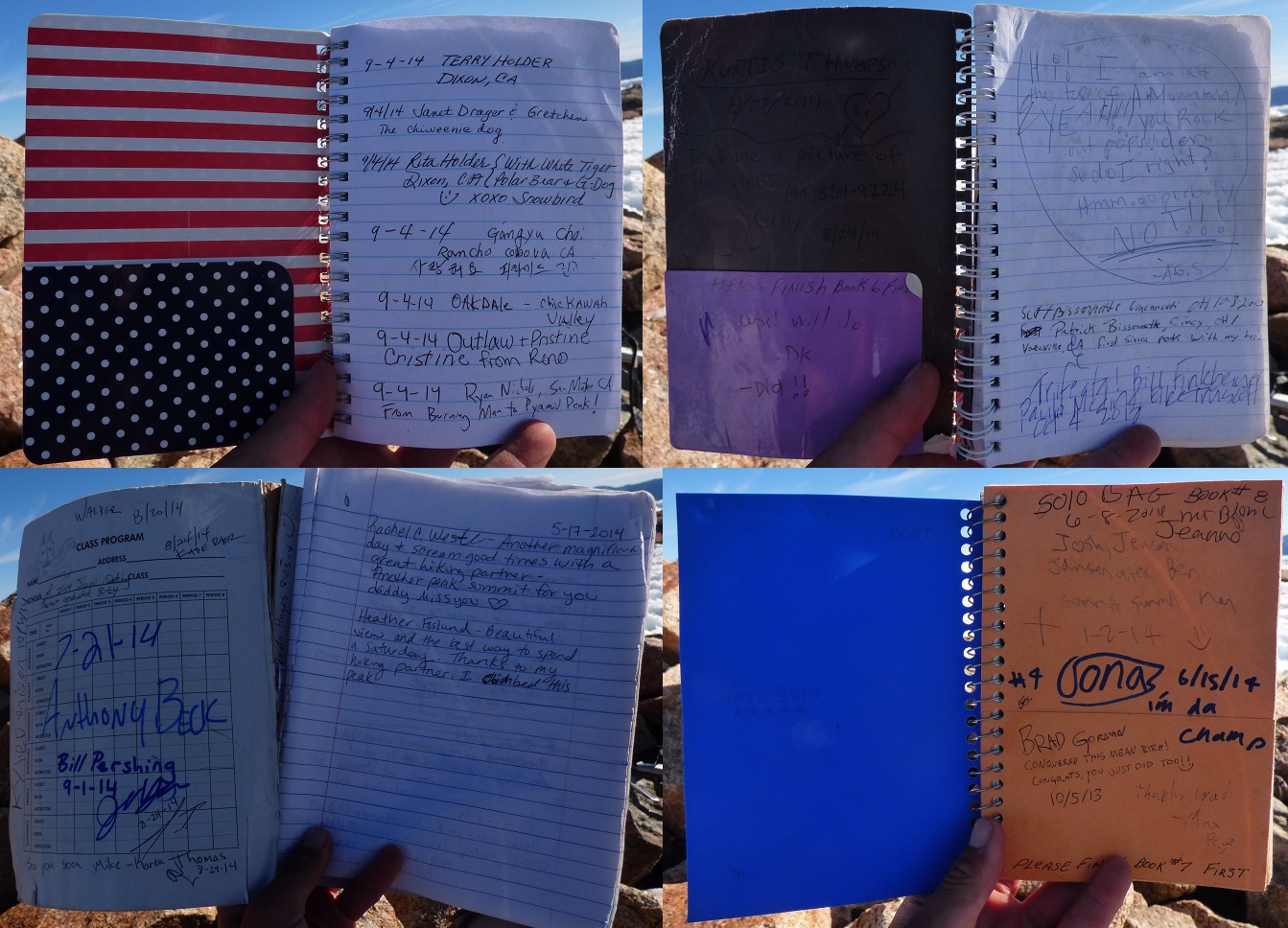 I spent roughly 30 minutes at the summit, pursuing through the registers and studying the descent. It was simple enough. I descended Pyramid's west ridge to a broad saddle east of Point 8682 (see map), skirted around the south side of Point 8682, then dropped west into Lyons Creek Canyon and picked up the Lyons Creek Trail. Starting just above the saddle before Point 8682, I picked up some seemingly recent snowshoe tracks which eased the postholing, even in snowshoes. Once I had intersected the Lyons Creek Trail, it was about 3.4 miles to the trailhead. The trail was a soggy wet mess covered in slushy snow, but it was a highway compared to the ridge. I reached Lyons Creek Trailhead at around 1pm and gladly threw off the pack. 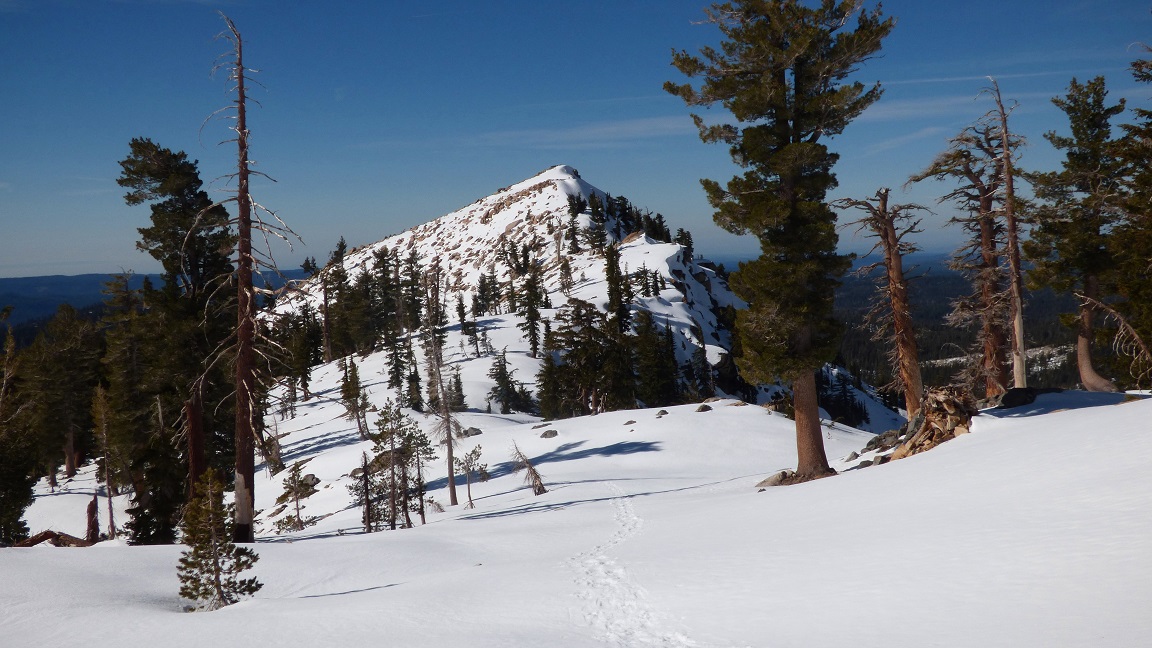 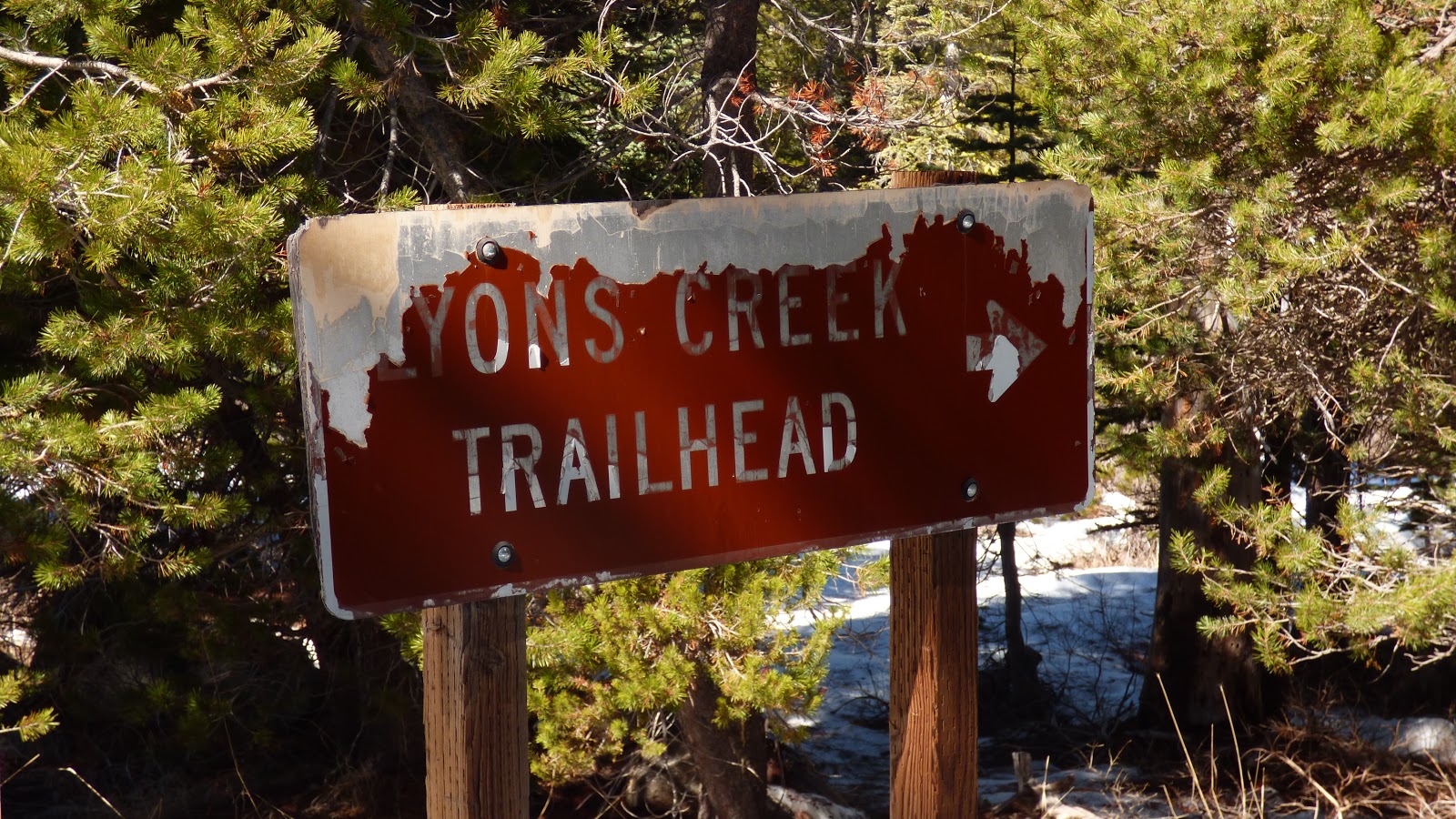 back to Crystal Range Traverse