Back to day 4
home page

July 17, 2014
Throughout the previous night, I had tossed and turned back and forth, not really getting much sleep. In the end, I had probably gotten around 2.5 hours of actual sleep. By 5:45 am, I stepped out of the hut all packed up and feeling groggy but noticeably more rested, and continued north on the JMT towards Evolution Lake which was roughly 5.5 miles away. 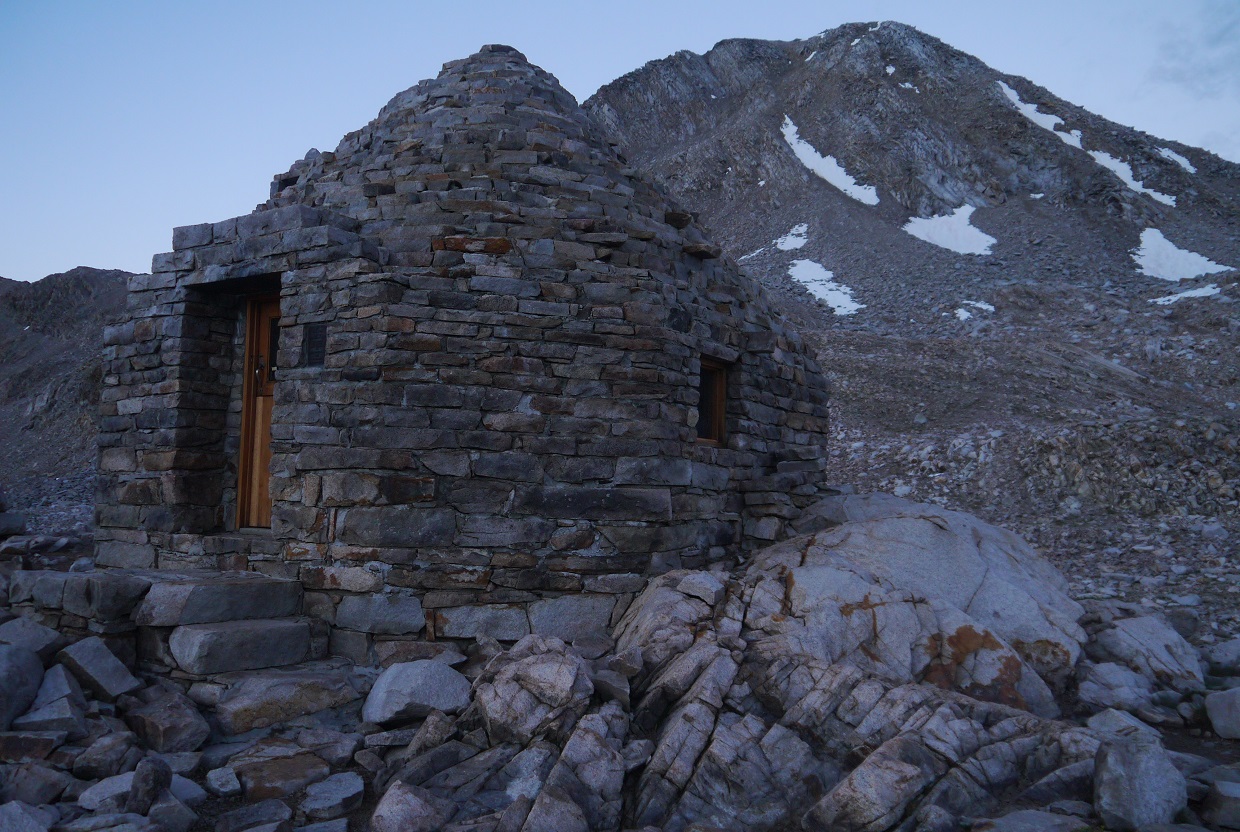 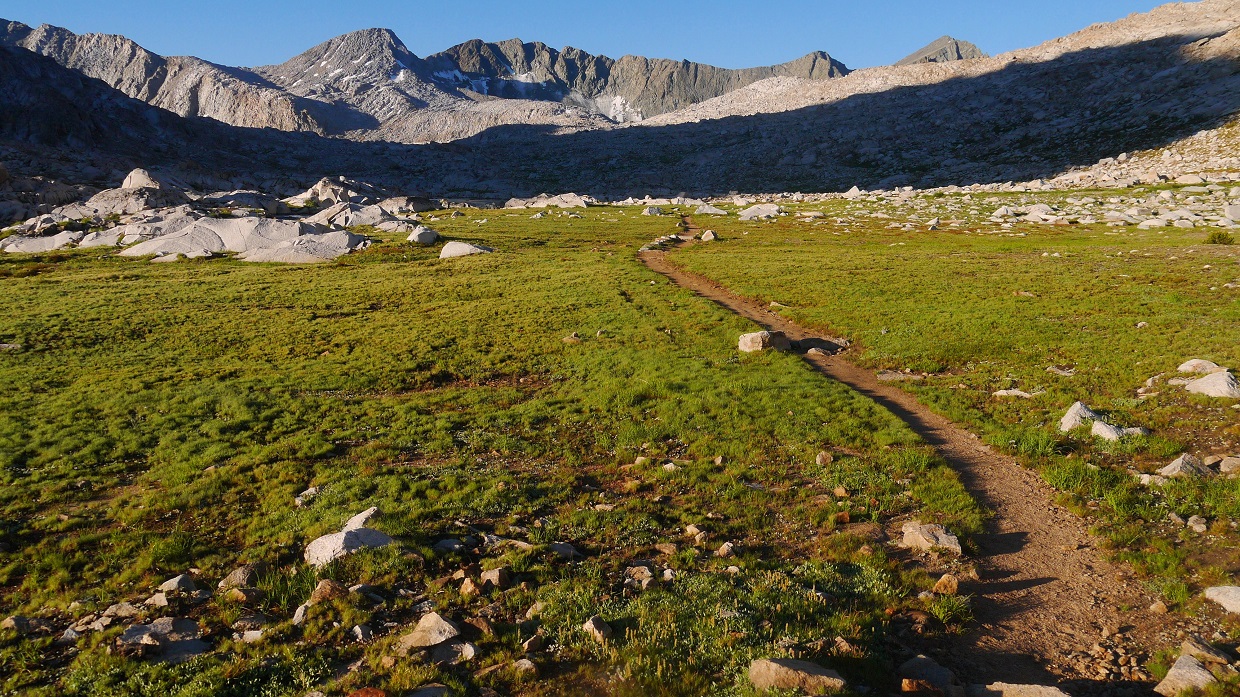 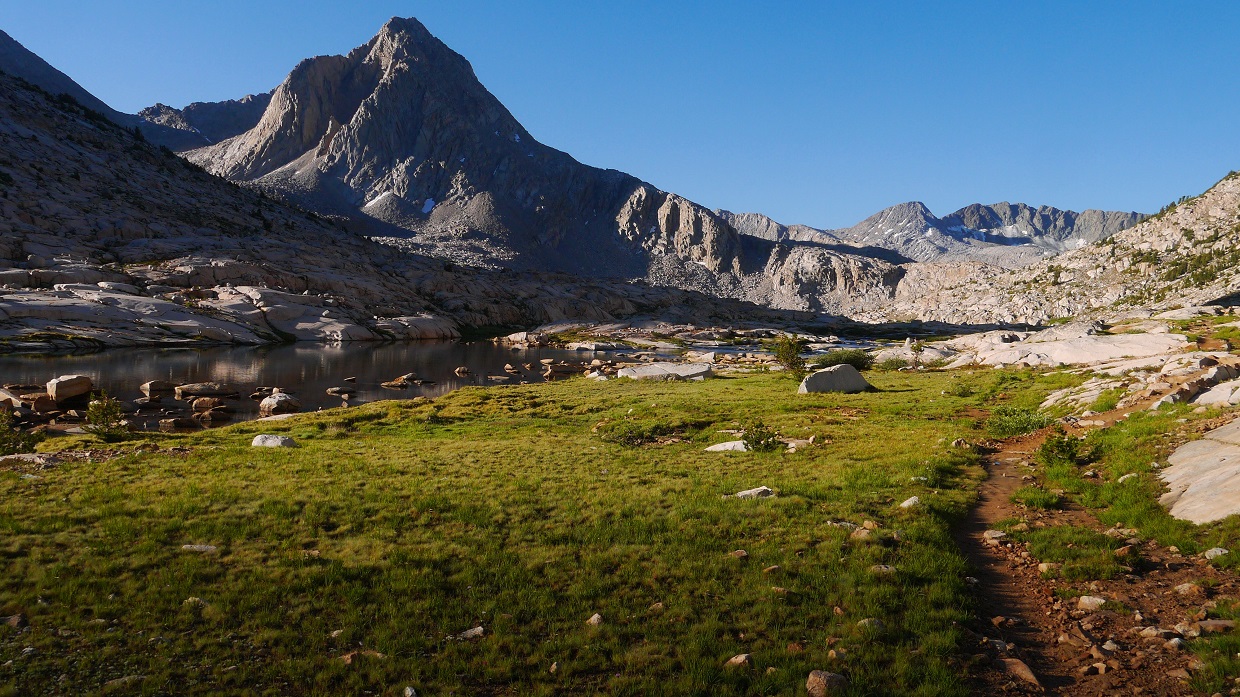 I reached the outlet of Evolution Lake at around 8am and promptly began looking for Michael. After 20 minutes, it was pretty clear that he had already left.

Now all I had to do was leave the JMT shortly after Evolution Lake, head up onto Darwin Bench, and rock hop my way up Darwin Canyon to Lamarck Col. From there, I would descend to Upper Lamarck Lake, pick up the Lamarck Lakes Trail, and follow it a few miles back to the trailhead.

I left the JMT right at the spot where it began switchbacking down into Darwin Canyon (~10,660 ft and approximately 0.6 miles after leaving the western end of Evolution Lake). Shortly afterwards I picked up a well trodden use trail which headed up north towards Darwin Bench. This use trail petered out at ~11,200 ft at a shallow lake on the bench itself. To the east of this lake was Darwin Canyon. I headed around the west side of the lake, which turned out to be a bad idea due to boulder hopping. 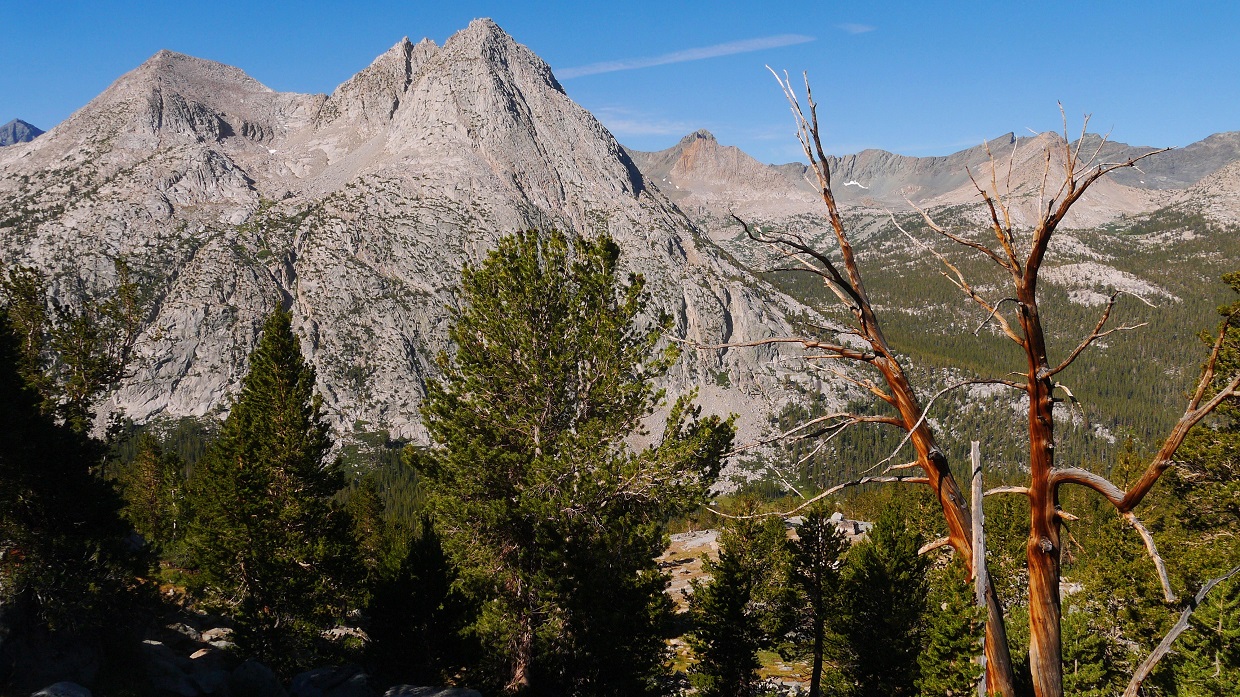 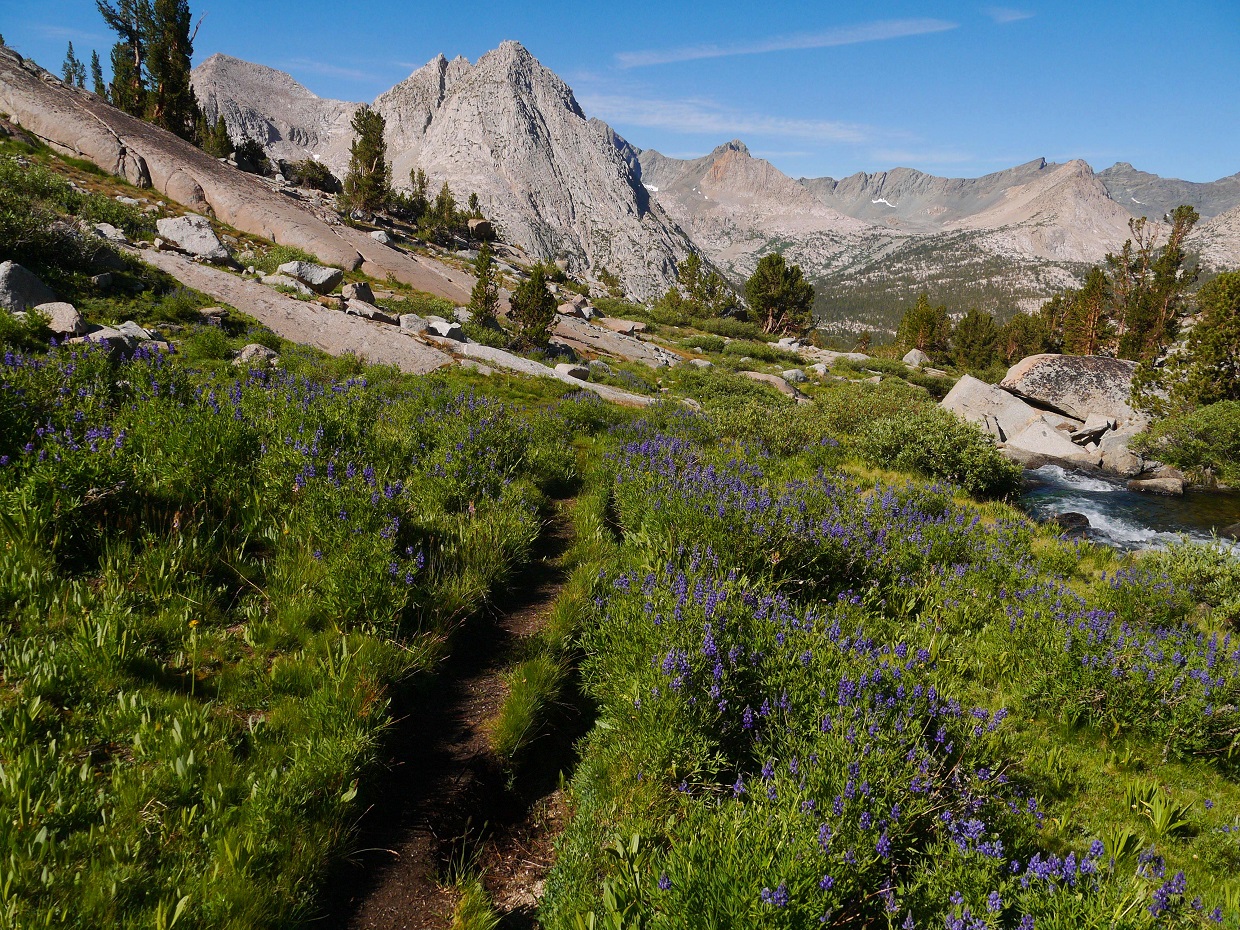 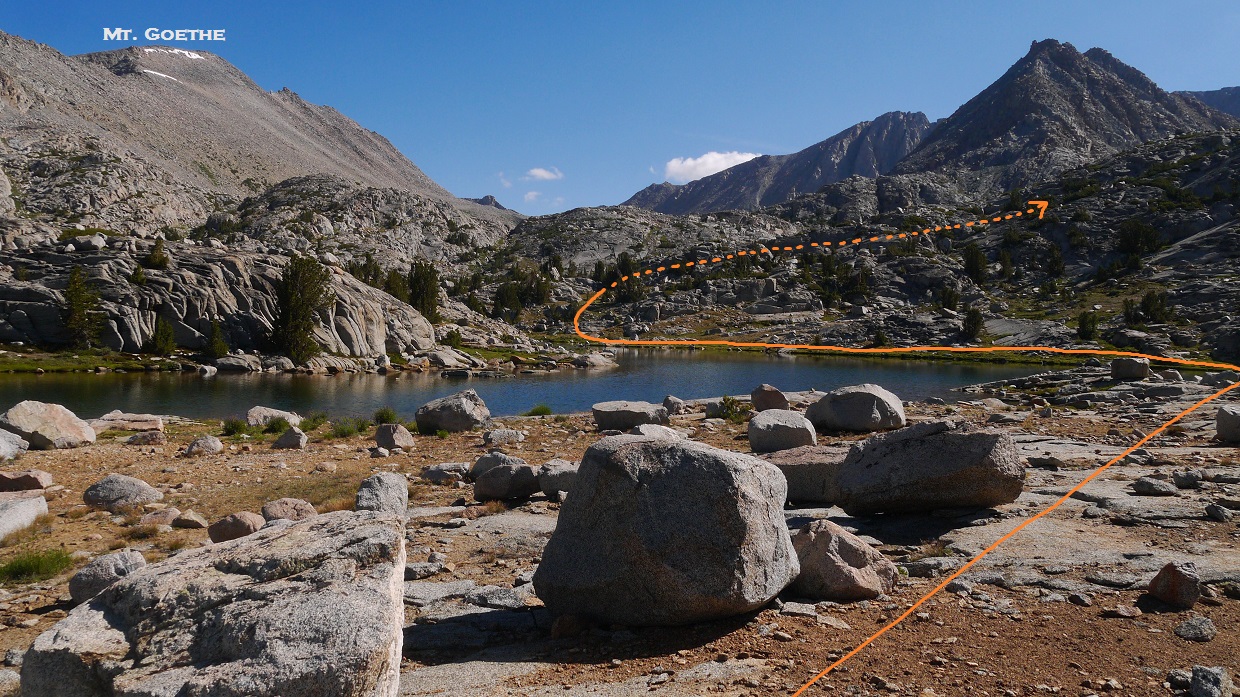 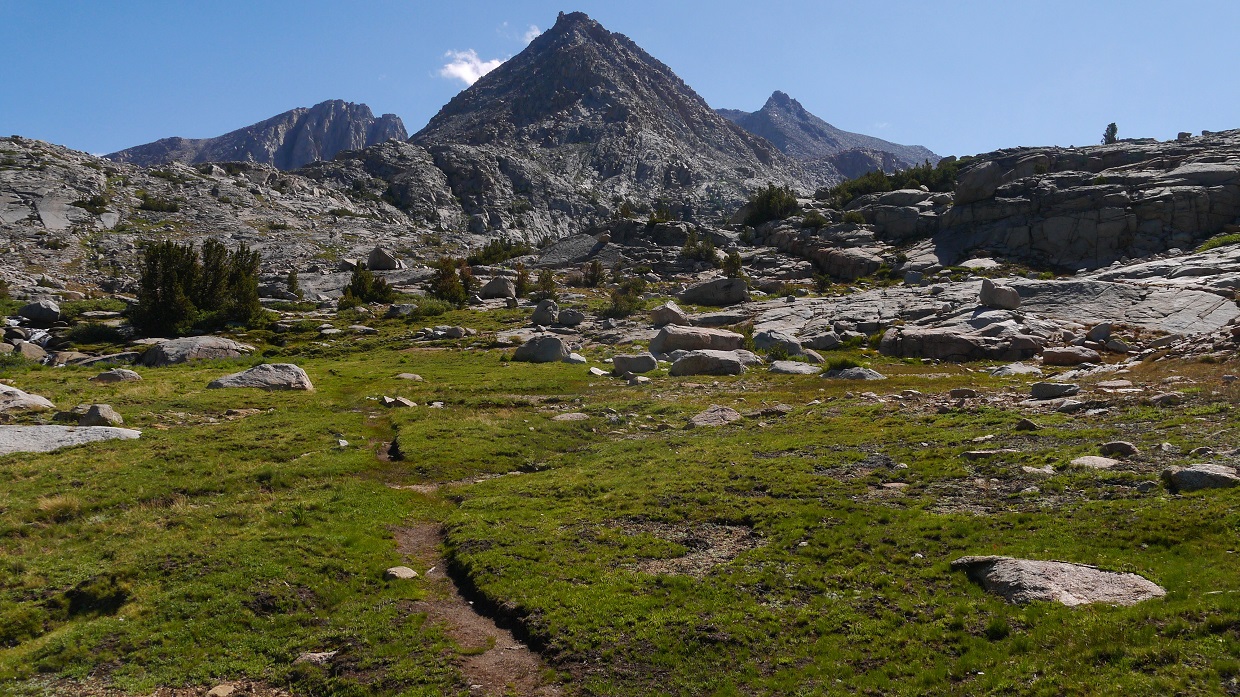 The hike through Darwin Canyon was just like what everyone had said it to be: slow going, scenic, and a lot of rock hopping. I headed up the canyon by staying above and to the north of the Darwin Lakes. Once at the highest of the lakes (11,750 ft), I began trudging up northeast towards Lamarck Col (12,920 ft), finding a nice use trail which surprisingly lasted most of the way. 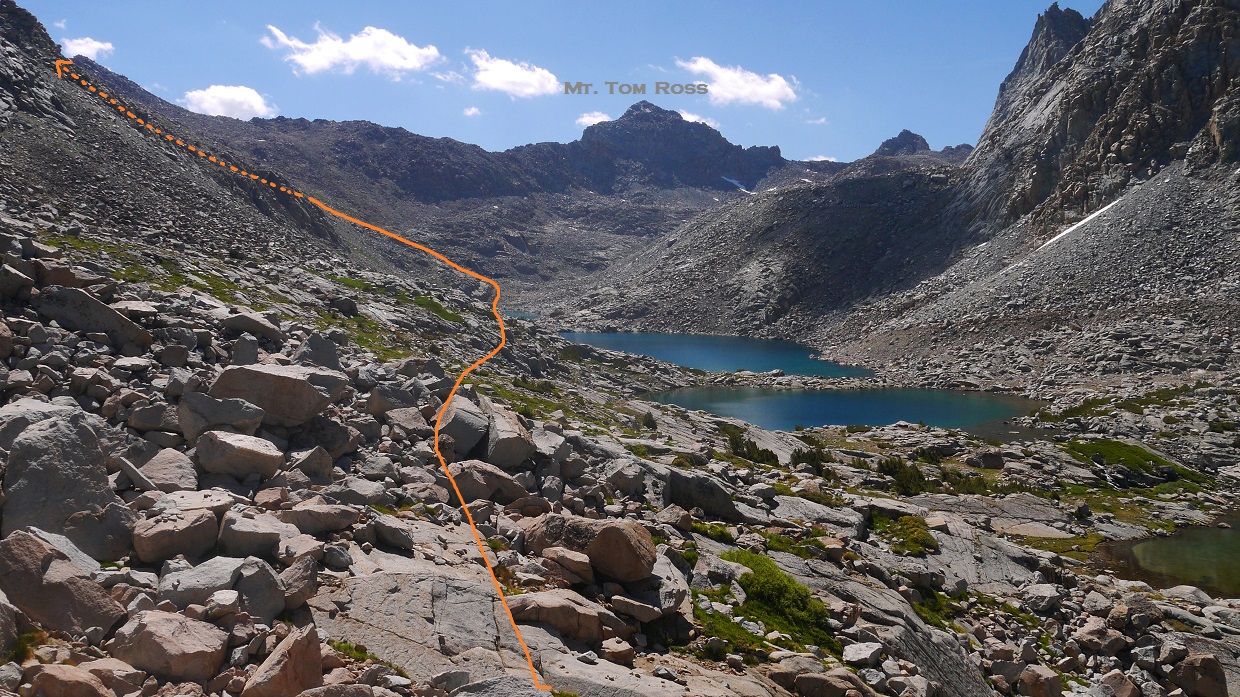 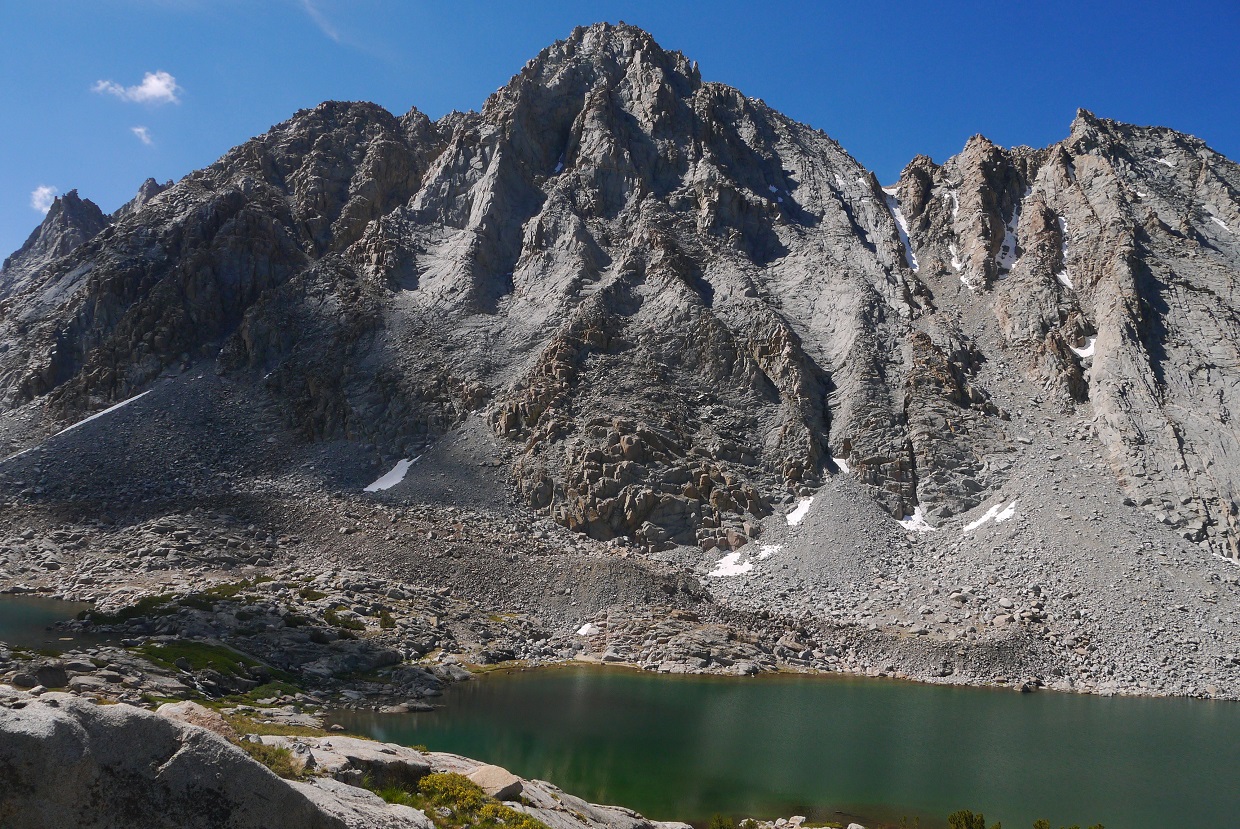 getting ever so closer 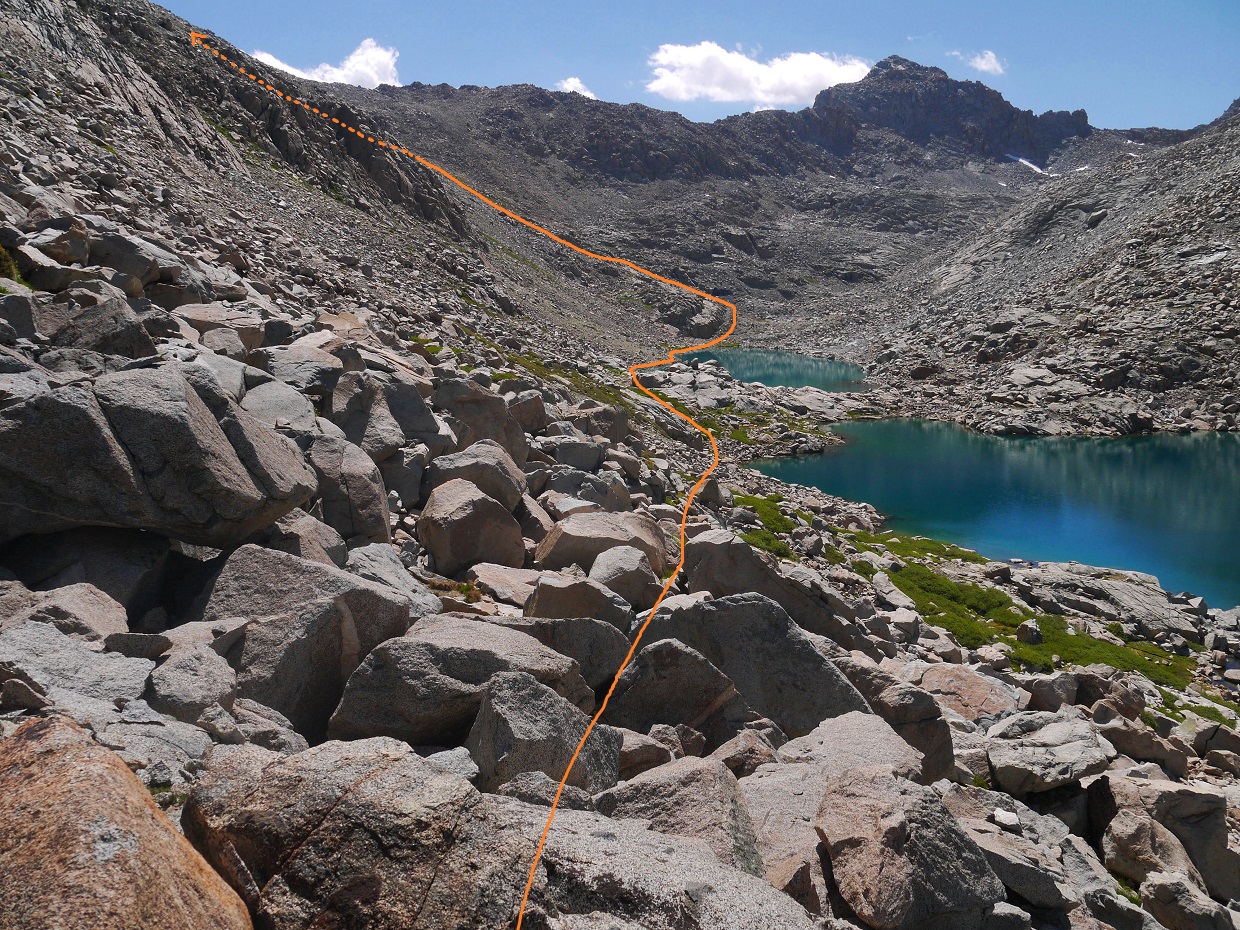 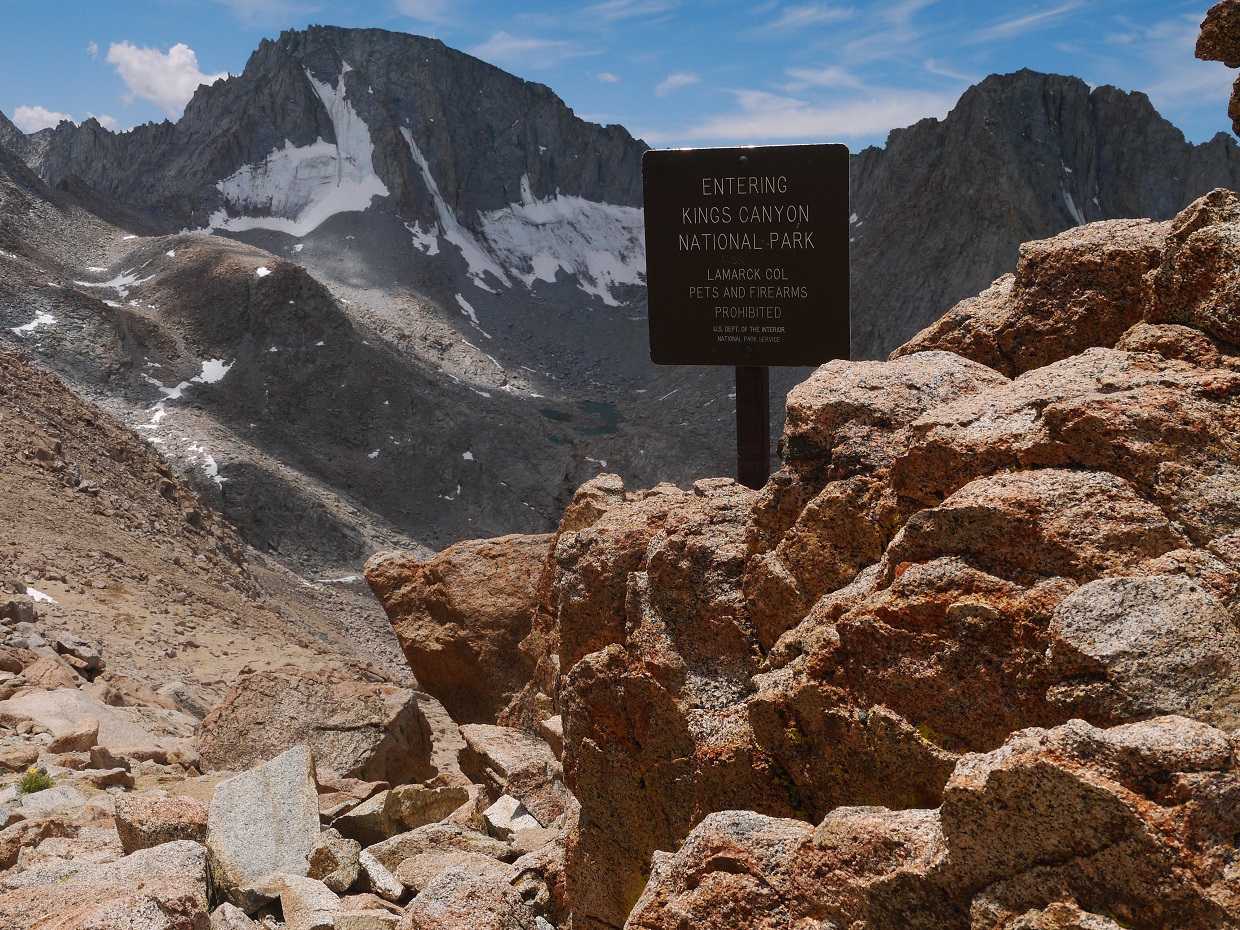 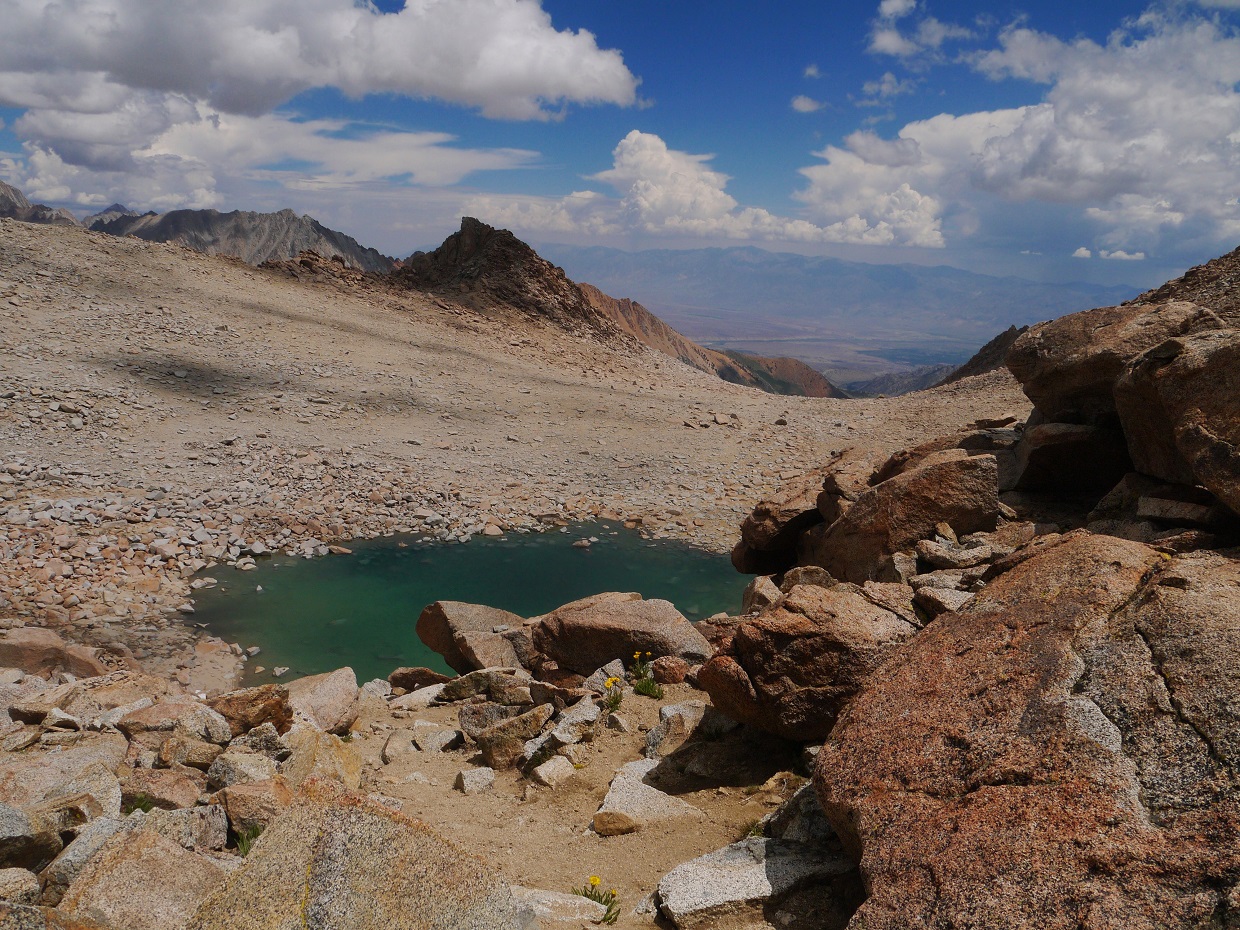 From here, the descent to the Lamarck Lakes Trail was supposed to be a smooth, sandy, and relatively pleasant downhill slog. It felt nice to heel plunge in soft sand and know that there were no more major uphills between me and the trailhead. 10 minutes after leaving Lamarck Col, I spotted a red figure heading up towards me. It was Michael. It turned out that he had grown slightly ill after leaving the traverse and had hiked out then drove down to Bishop. Feeling much better today, he headed back up to bag Mt. Lamarck. He asked me to join him on Lamarck, and I tried, but the first few steps had me gasping for breath. I decided to stay there and take a nap while he headed up to bag it.

Roughly an hour later, Michael returned from his successful ascent, and we headed back down together. From a spot ~0.8 miles northeast of Lamarck col at ~12,190 ft of elevation the standard route hooks over to the right to a faint sandy saddle, then follows a drainage ENE for a short distance before hooking up with a trail which switchbacks down to Upper Lamarck Lake. Michael was adamant about descending the way he ascended, which was to continue northeast directly down that drainage we were in. This turned out to be a bad idea. The route was loose at the top, full of large boulders at the bottom, then up and down along the southern side of Upper Lamarck Lake. By 2:45 pm, we had reached the Lamarck Lakes Trail, and finally were able to let our routefinding senses zone out. A little over an hour later, we were back at North Lake Trailhead. It had been a tough but rewarding five days.

looking down the direct drainage 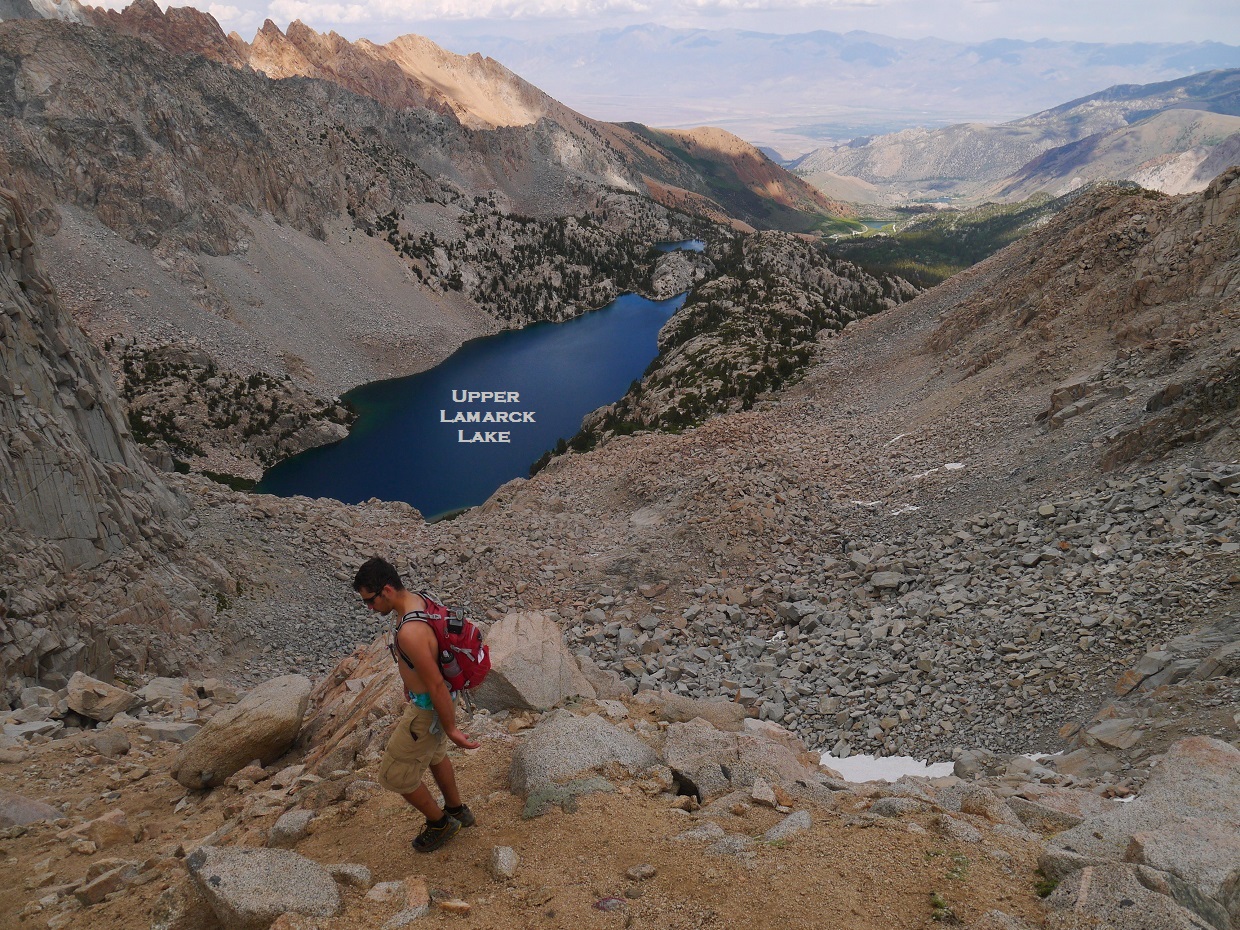 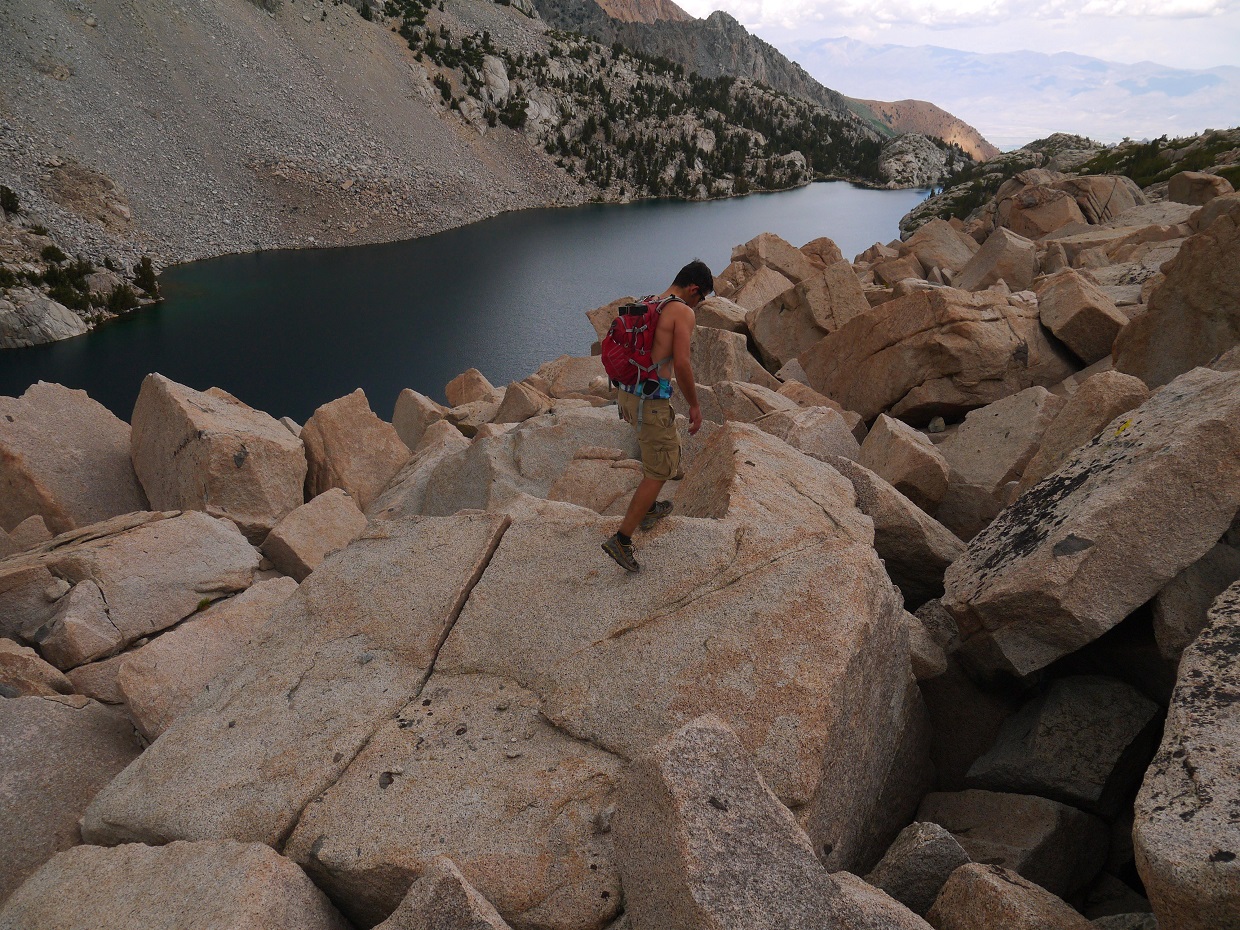 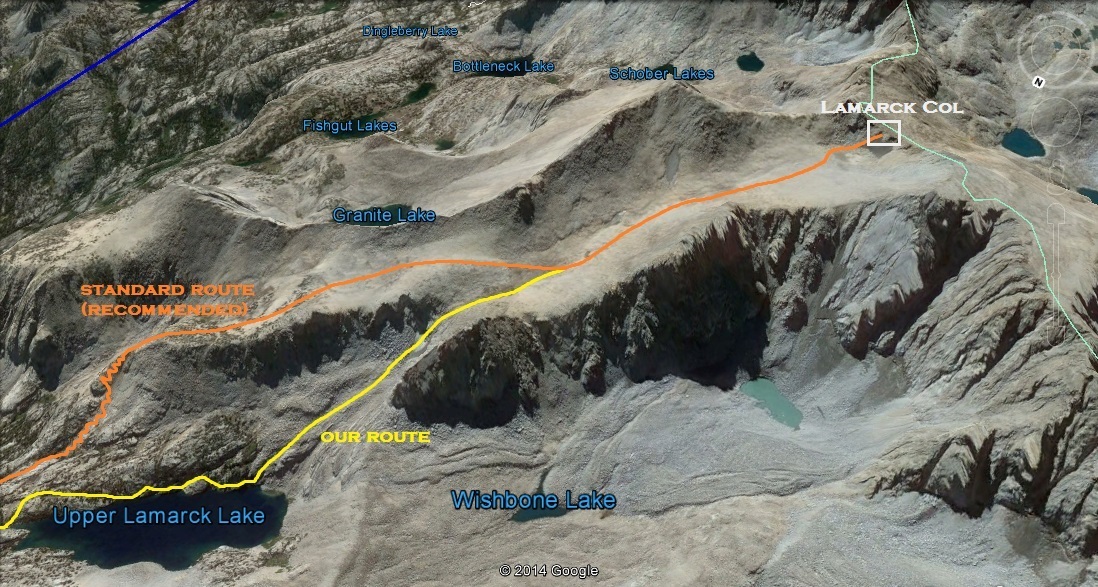 back to Blackcap Traverse