July 19, 2014
The East Buttress (III, 5.7) of Mt. Whitney is a greatly solid and aesthetically pleasing climb with great rock quality. Tourists down in Lone Pine often gawk at the large spire which contains the route, wondering how anyone could possibly be climbing it. Even though the nearby East Face is more of a classic climb, many regard the East Buttress as having better quality rock and more sustained technical terrain.

The nice thing about climbing routes on Whitney is that the approaches are relatively easy compared to that of other classic climbs. Adam and I planned to dayhike the route, starting at Whitney Portal Trailhead at around 4am and hopefully reaching the base of the route within 3 hours. The approach for the East Buttress would be the North Fork of Lone Pine Creek. This is the same approach used for the popular Mountaineer's Route.


Getting to the trailhead: From Lone Pine off of Hwy 395, head west on Whitney Portal Rd for 13 miles to a parking area.

Tourist: "Thats the highest peak I see. So it MUST be Mt. Whitney!!! Right?" 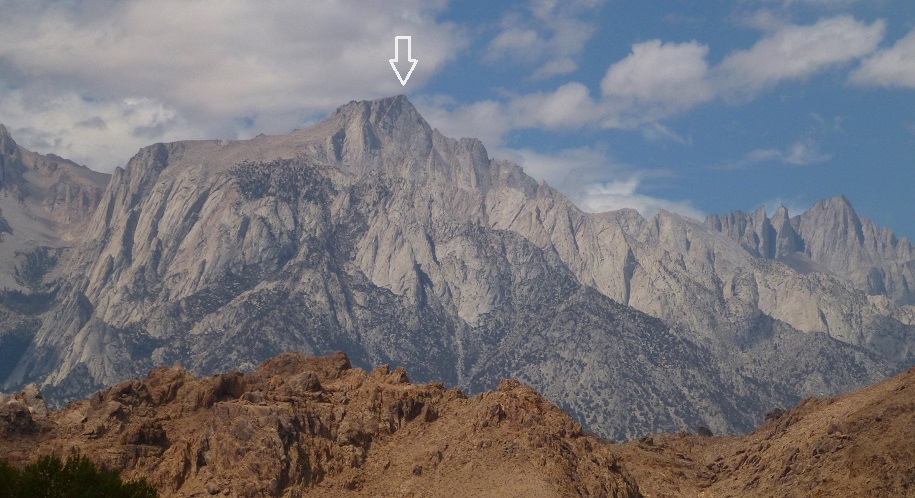 It was around 4:15 am as we began making our way up the Whitney Trail. Both of us were surprised at how busy Disneyland.....err...Whitney Portal Trailhead (8,300 ft) was this early in the morning. There were several people and cars moving about. 0.8 miles after leaving the trailhead, the North Fork Trail branched off to the right (8,700 ft), marked by a sign. This trail was steeper and unmaintained, but was well trodden and easily visible. Less than a mile and 2 creek crossings later, we reached the Ebersbacher Ledges. 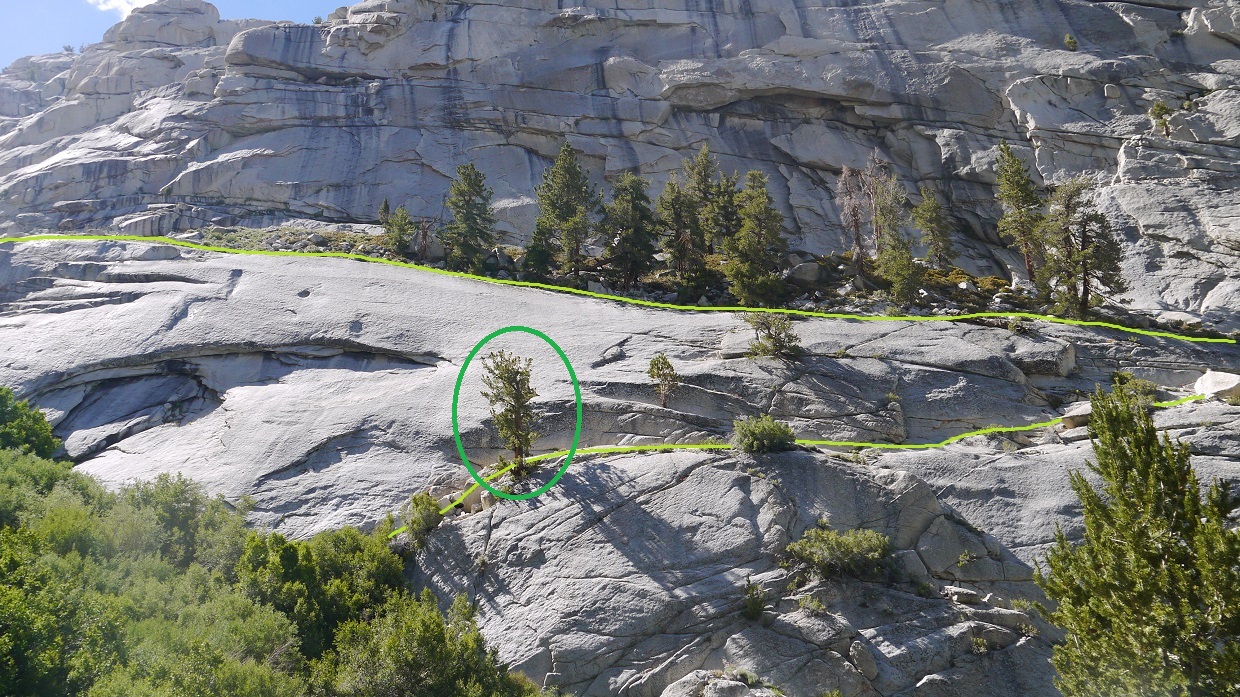 After the ledges, we continued up a use-trail which continued up the drainage to Lower Boy Scout Lake (10,300 ft). The trail then wrapped around the south side of the lake, fizzled out at some boulders, then came back again here and there. The sun began to rise by the time we were not far below Upper Boy Scout Lake. 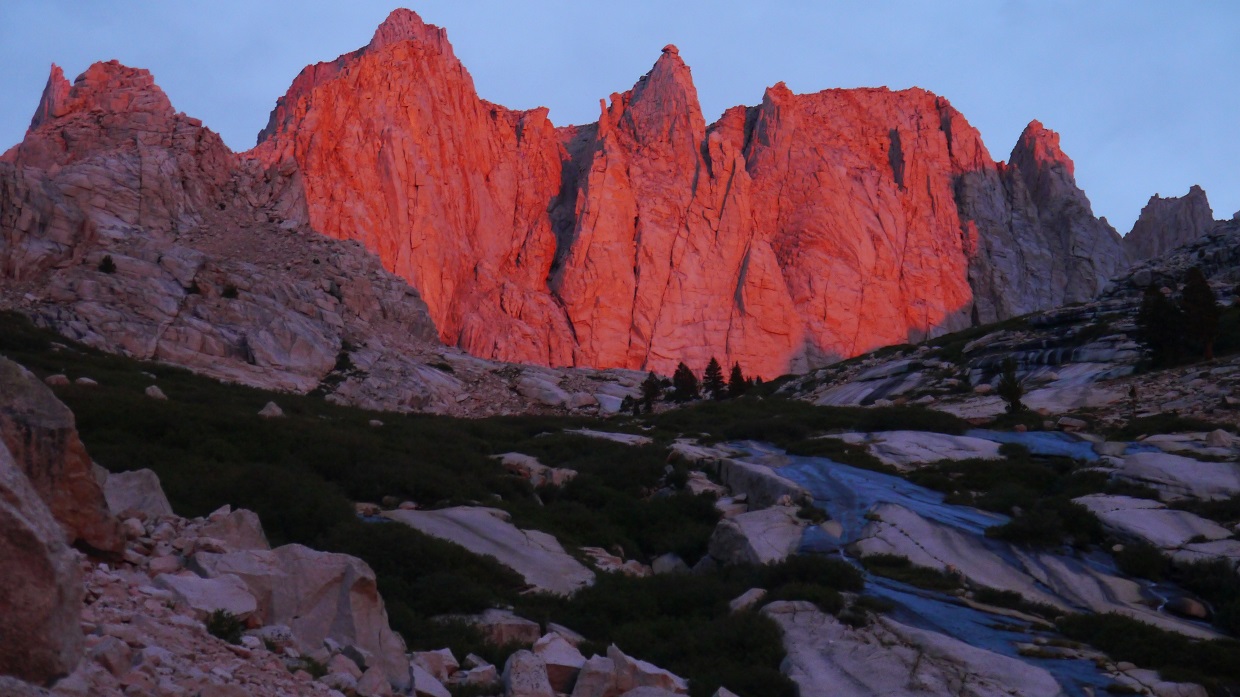 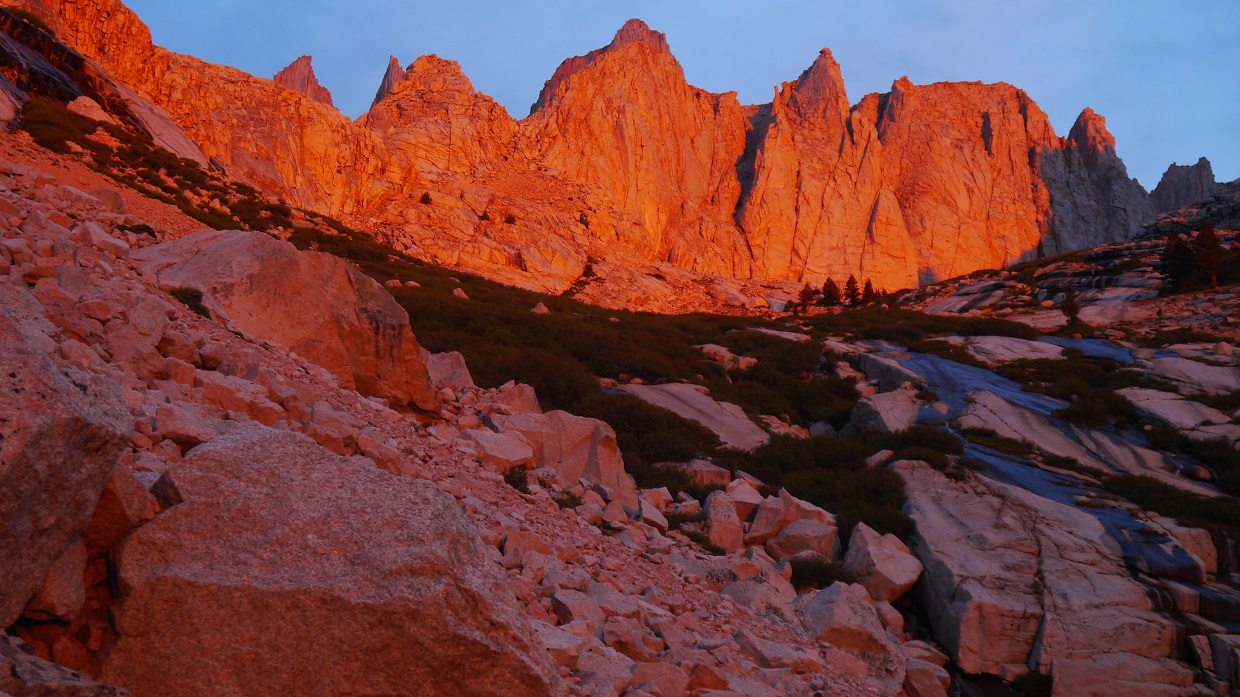 From Upper Boy Scout Lake, we headed up a slabby hill south of the lake's outlet, then wrapped around to the south side of a ridge that bordered the lake's southern side. Here, a pretty well trodden use-trail appeared. The trail continued on for about half a mile, then ascended north up a short headwall to Iceberg Lake.

the use-trail below Iceberg Lake 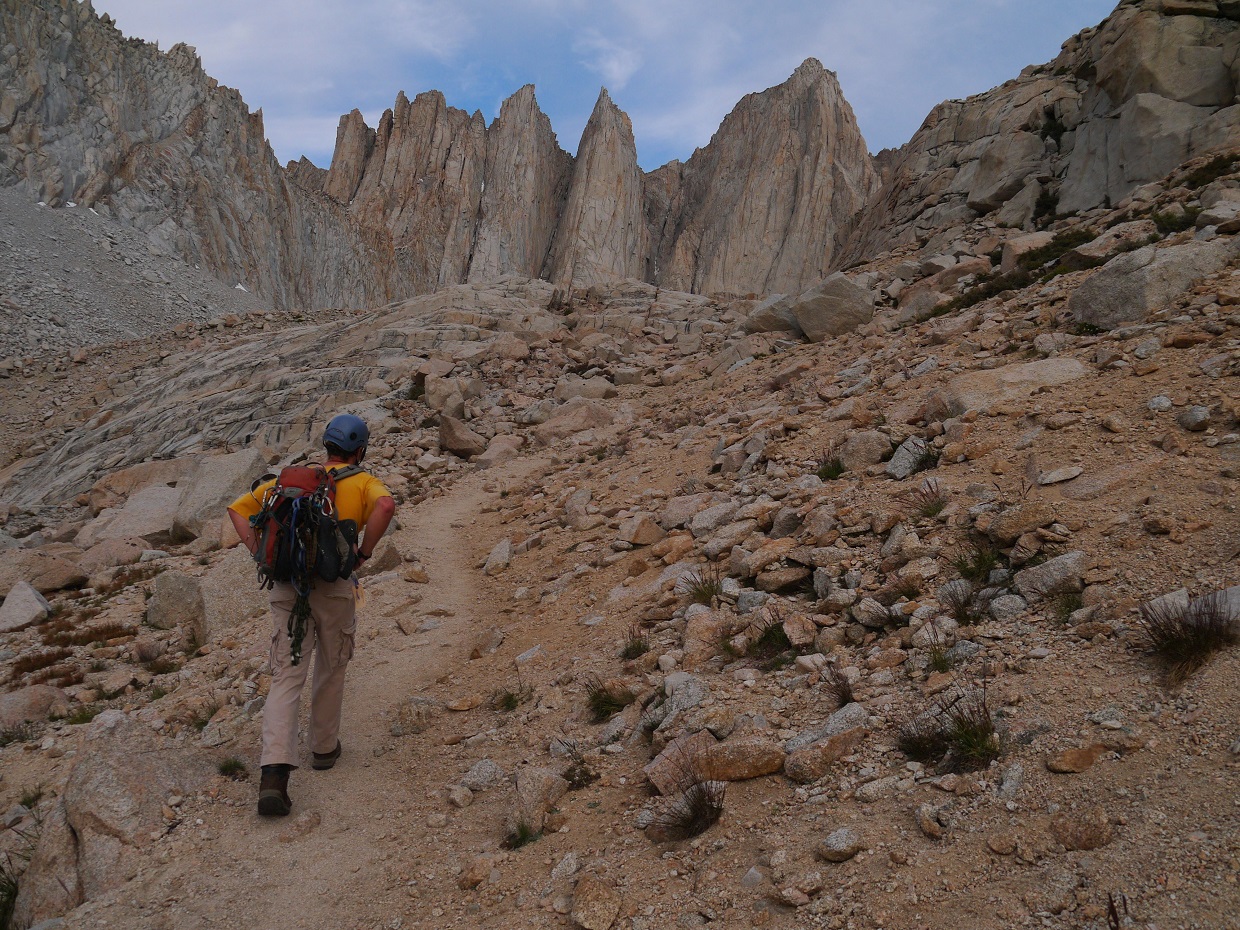 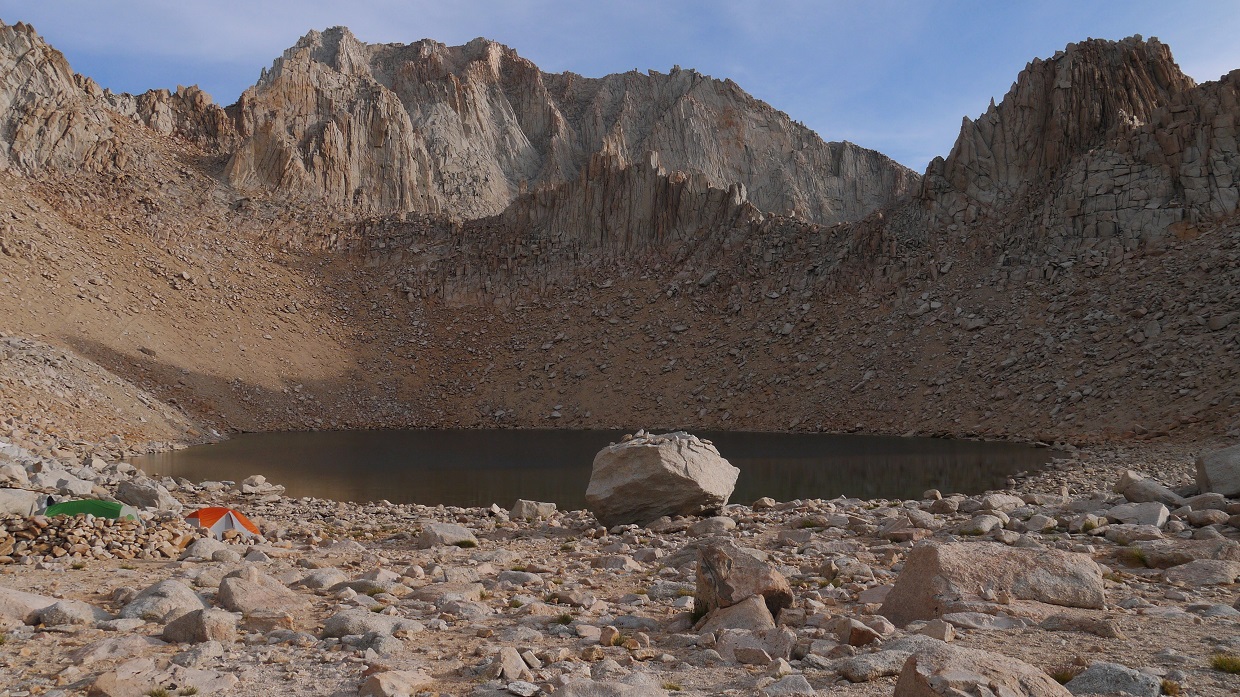 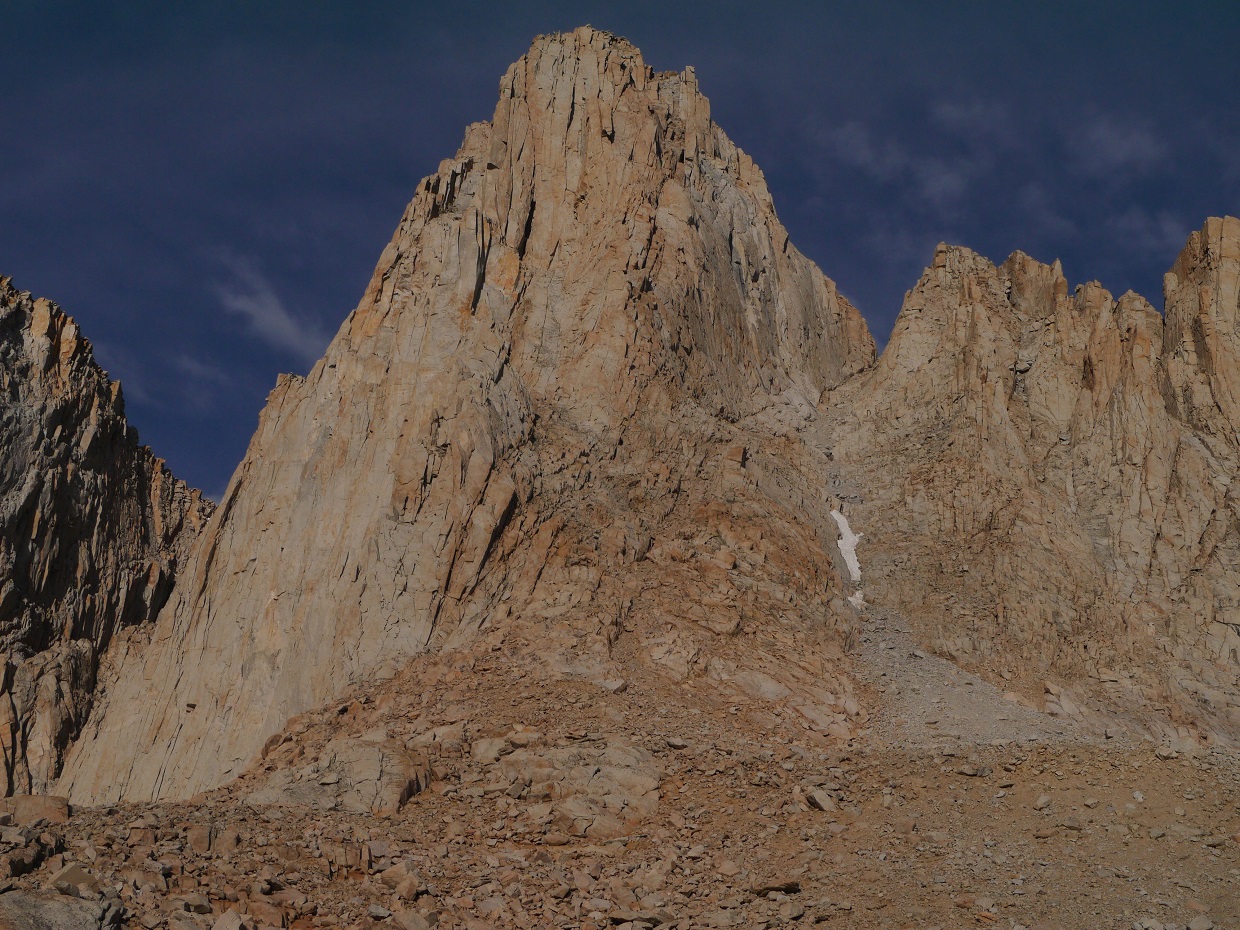 After filling up on water at Iceberg Lake, we began heading up towards the East Buttress, aiming for a series of cracks just below a prominent 13,360 ft notch right of the first tower. 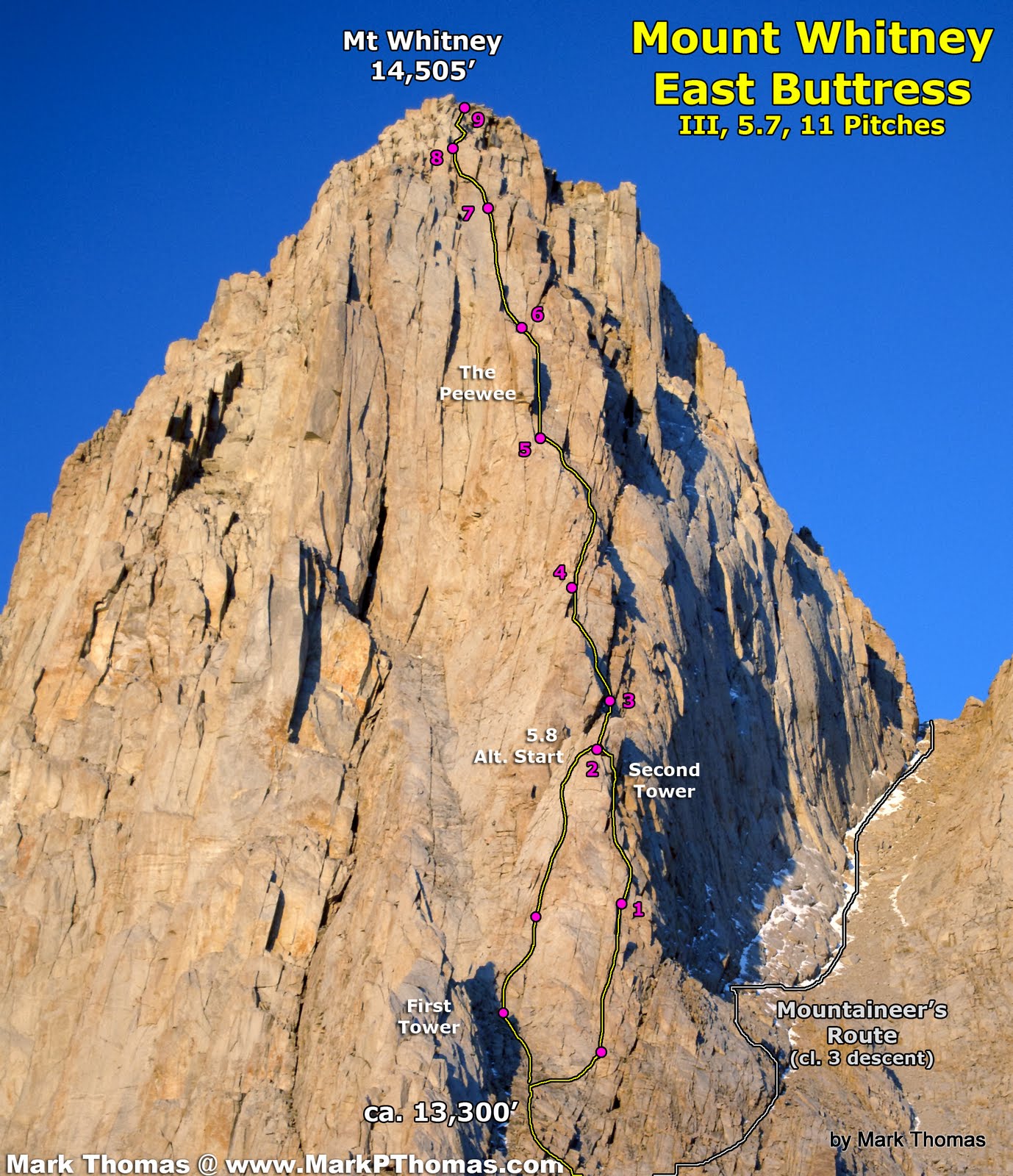 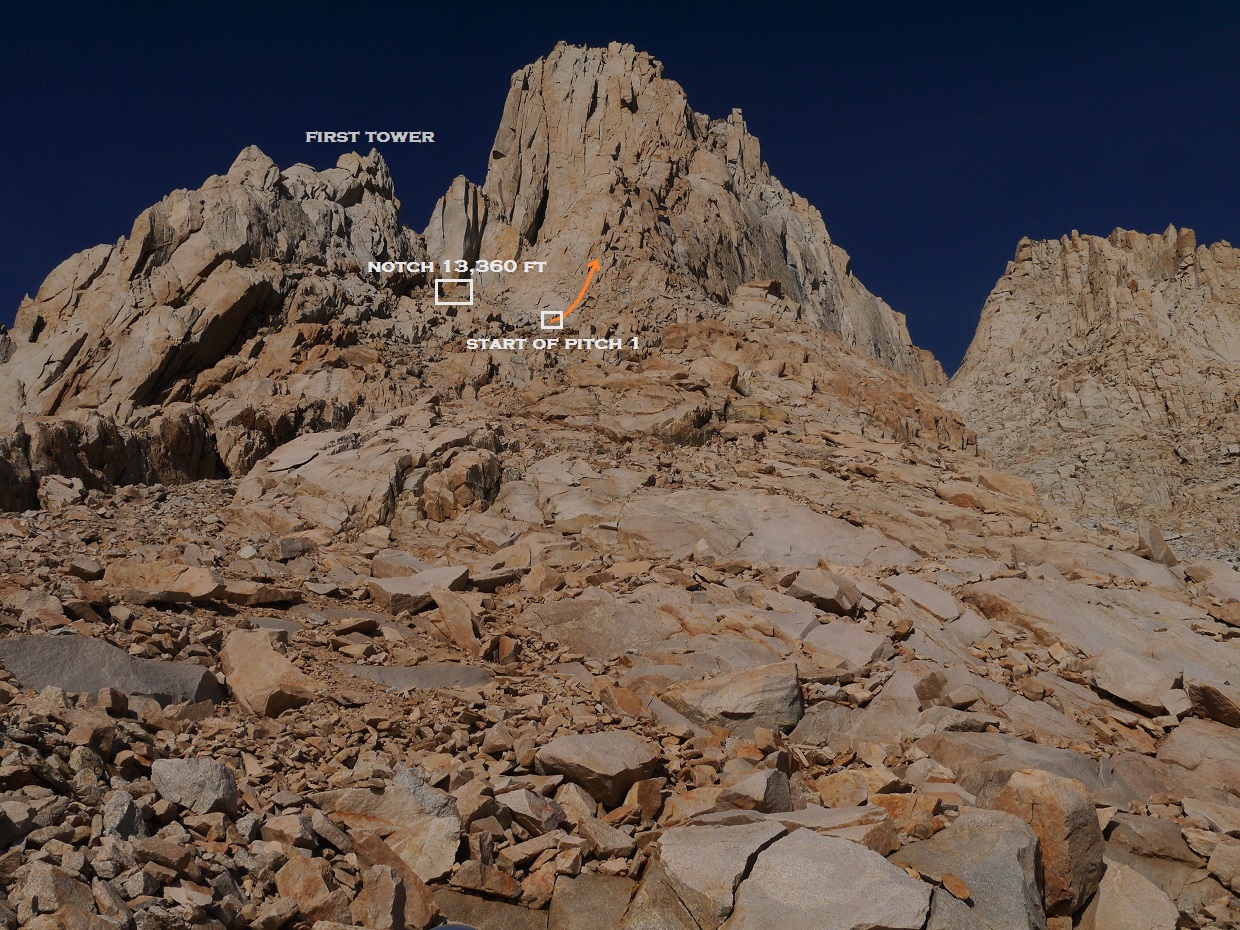 For P1 (5.6), we followed the cracks, going slightly up to the right, until we used up the length of our 60m rope. 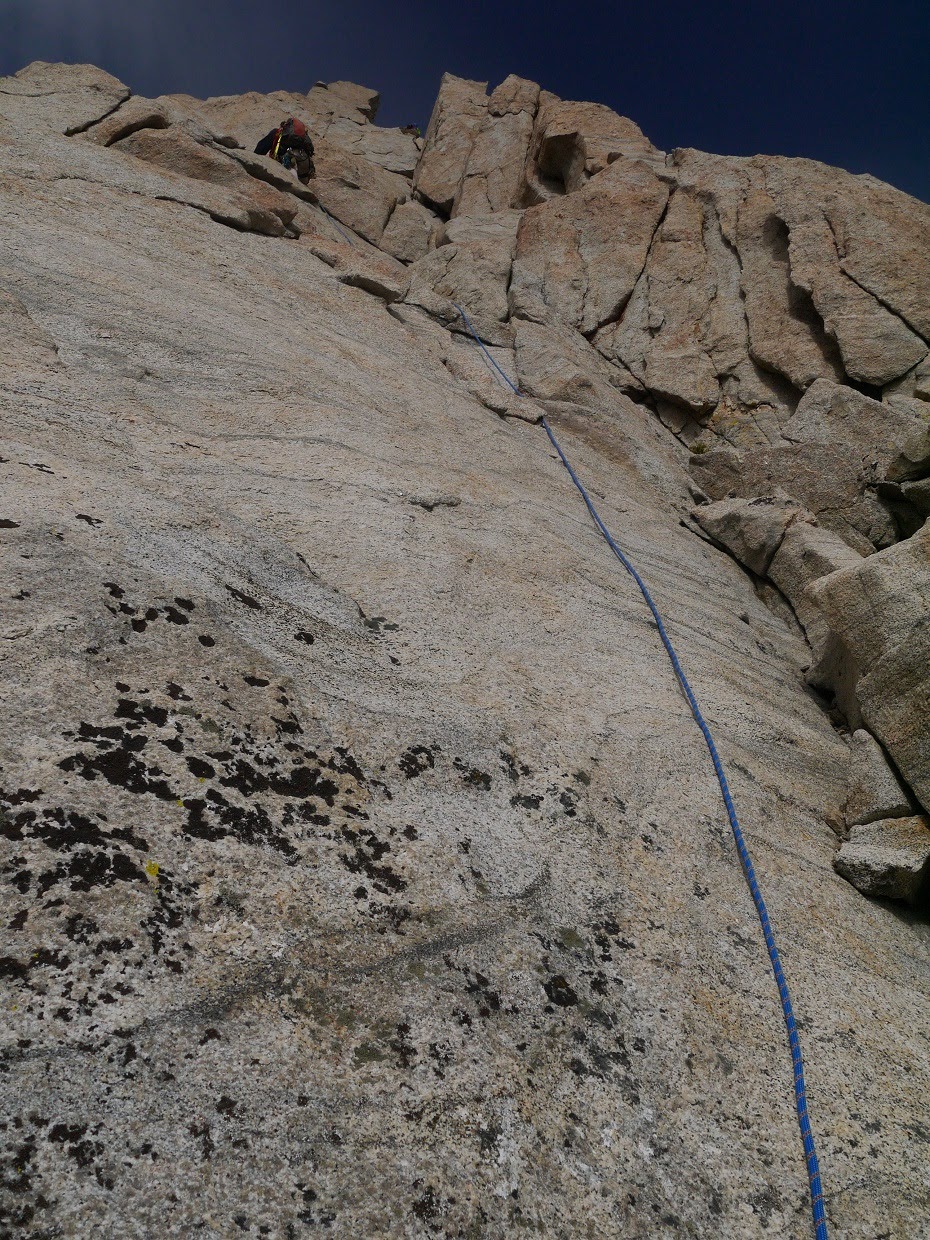 As we climbed onto the belay ledge for P2, we saw a man sitting there belaying his girlfriend who was leading. They were also climbing the East Buttress and seemed to be having some communication issues. The man had a angry expression on his face and was letting out several obscenities directed towards his girlfriend, who was roughly 150 ft above us. As he finally began climbing, he uttered in a perturbed voice, "NEVER take your girlfriend climbing!" As we began setting up for the next pitch, we could make out his angry voice echoing above: "Its two F***** simple words! ON BELAY!!!"

We ended up combining pitches 2 and 3 into one long pitch, using up the entire rope length. P2 remained on a ledge to the right side of the arete for a little bit before veering left onto the second tower. P3 ascended up a solid 5.7 mini-arete with poor protection before ending at a prominent notch on the other side of the arete which served as a really good belay station. 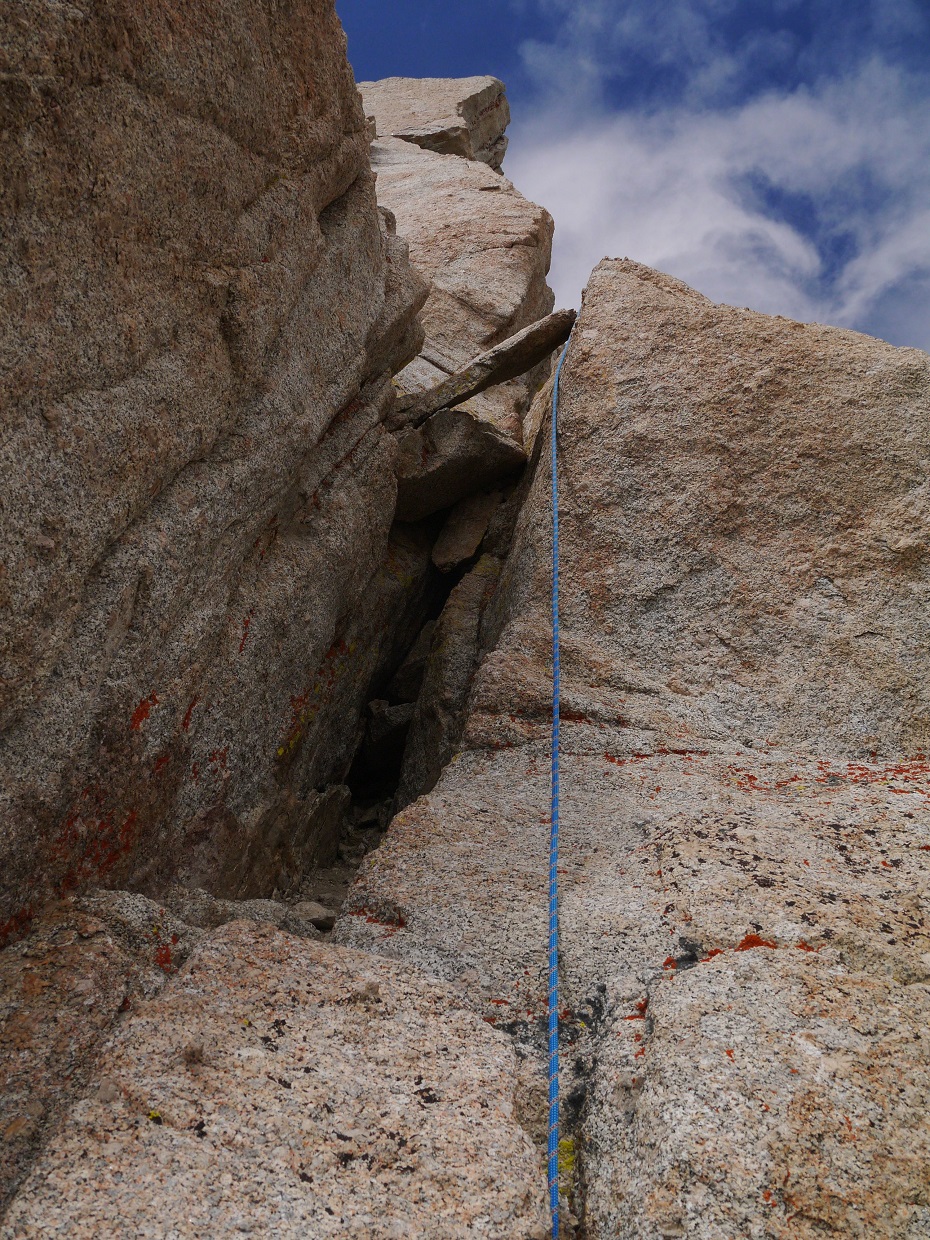 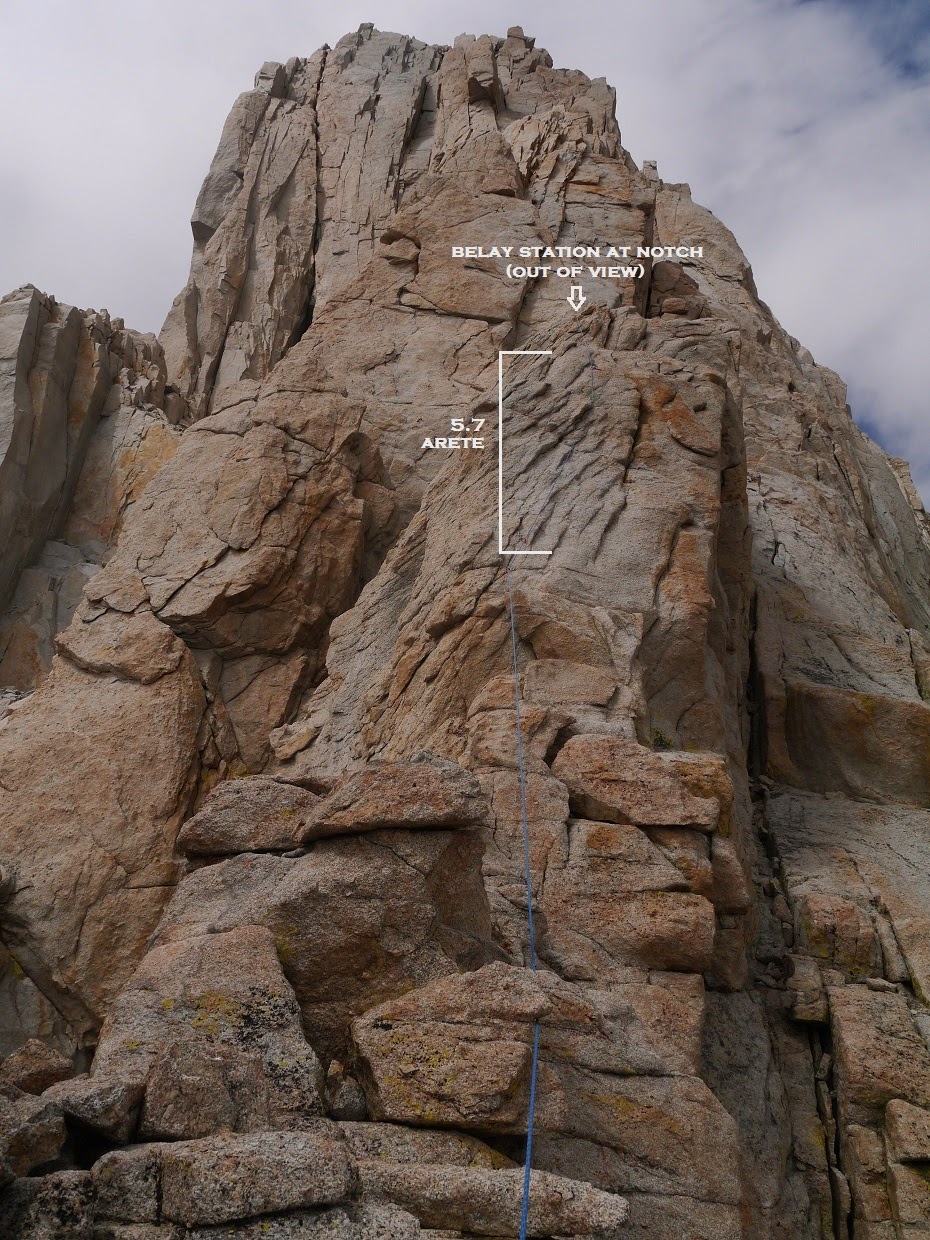 From the notch, there were two options. Option 1 (5.7) was to head left onto the arete. Option 2 (5.6) was to remain on a ledge to the right of the arete until it ended on the arete.

looking up at the start of P4 (option 1 is shown) 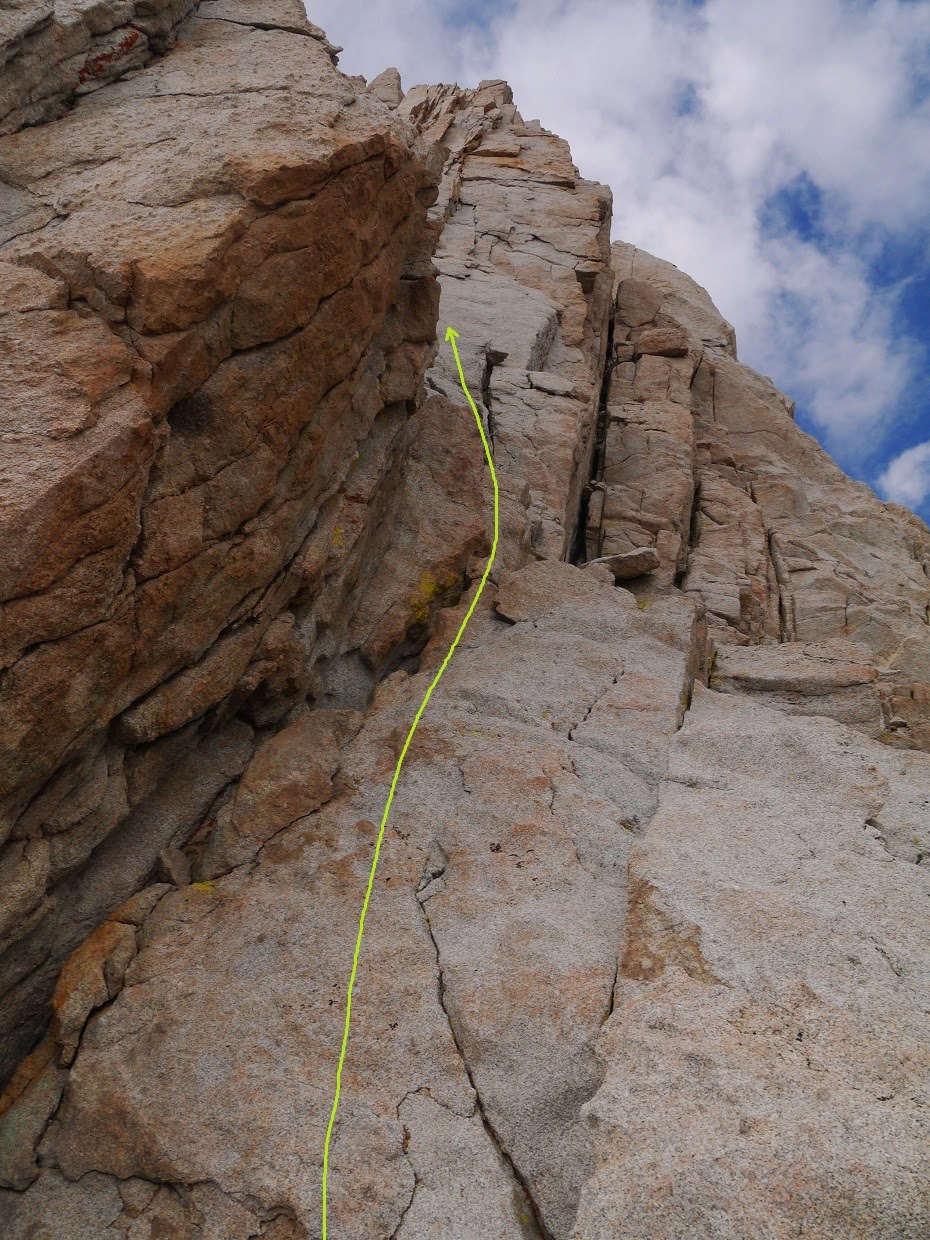 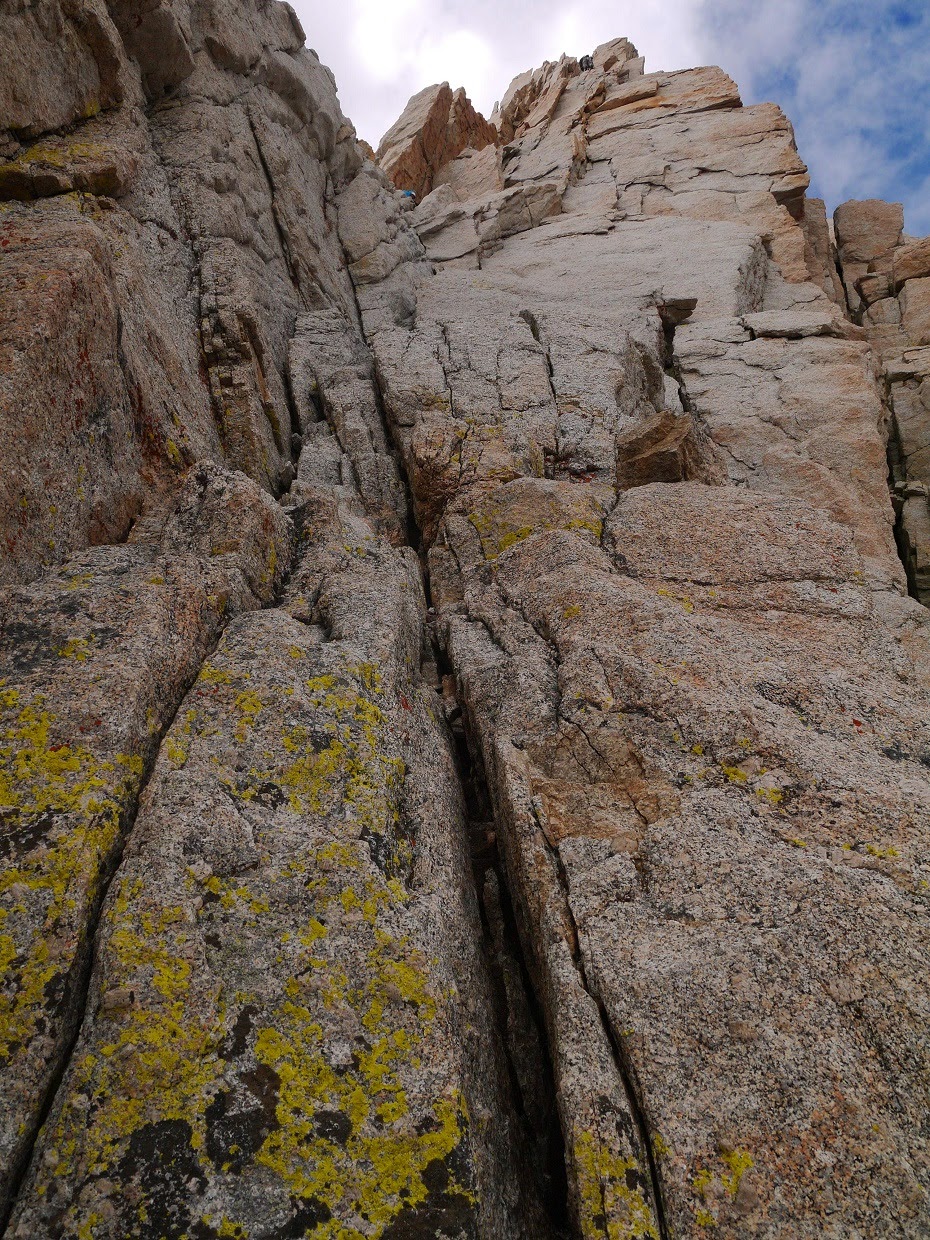 P5: We continued up one of several small ledges which made up the arete for several feet, then climbed to a spot just below and to the right of The Peewee, a large and distinct overhanging rock formation. 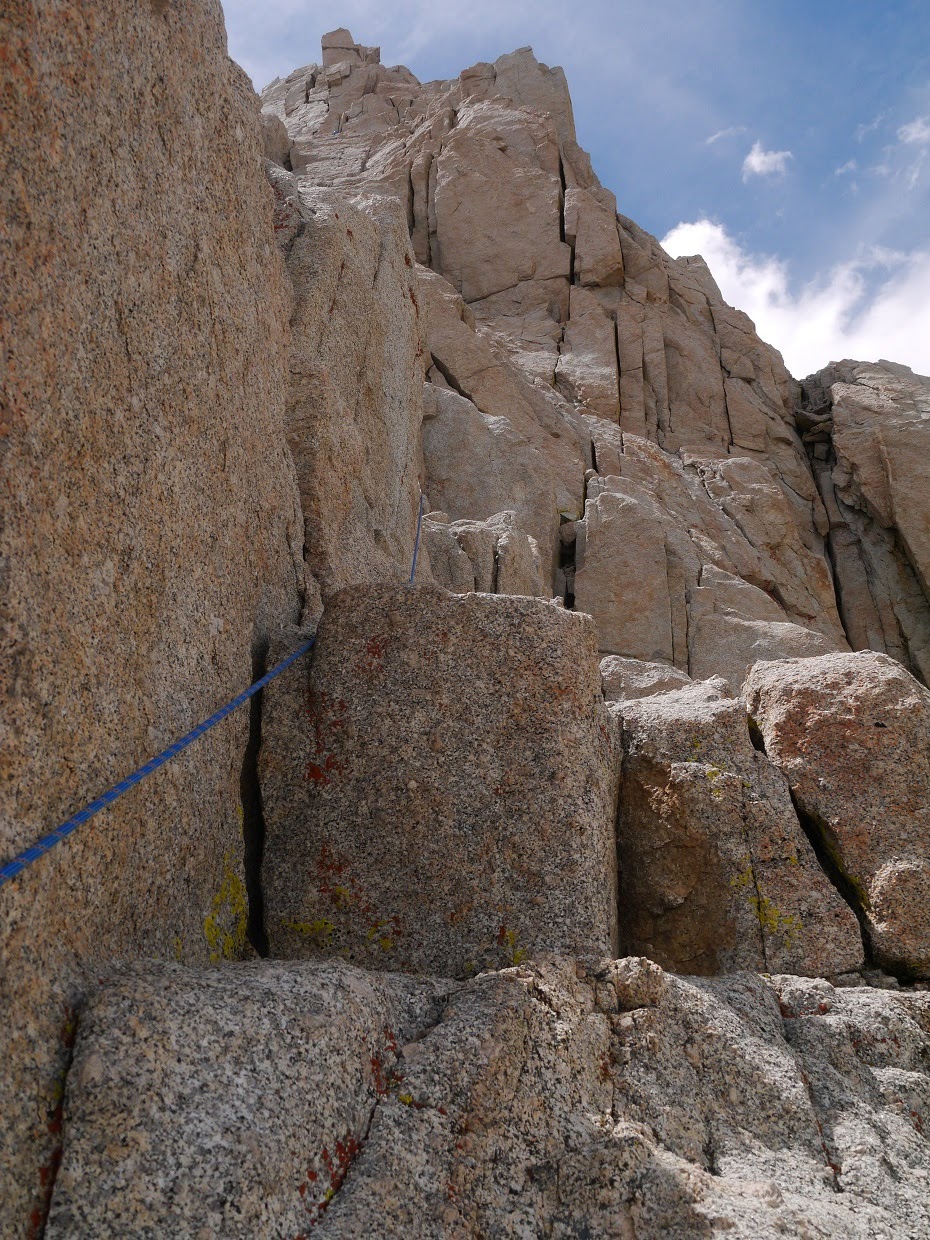 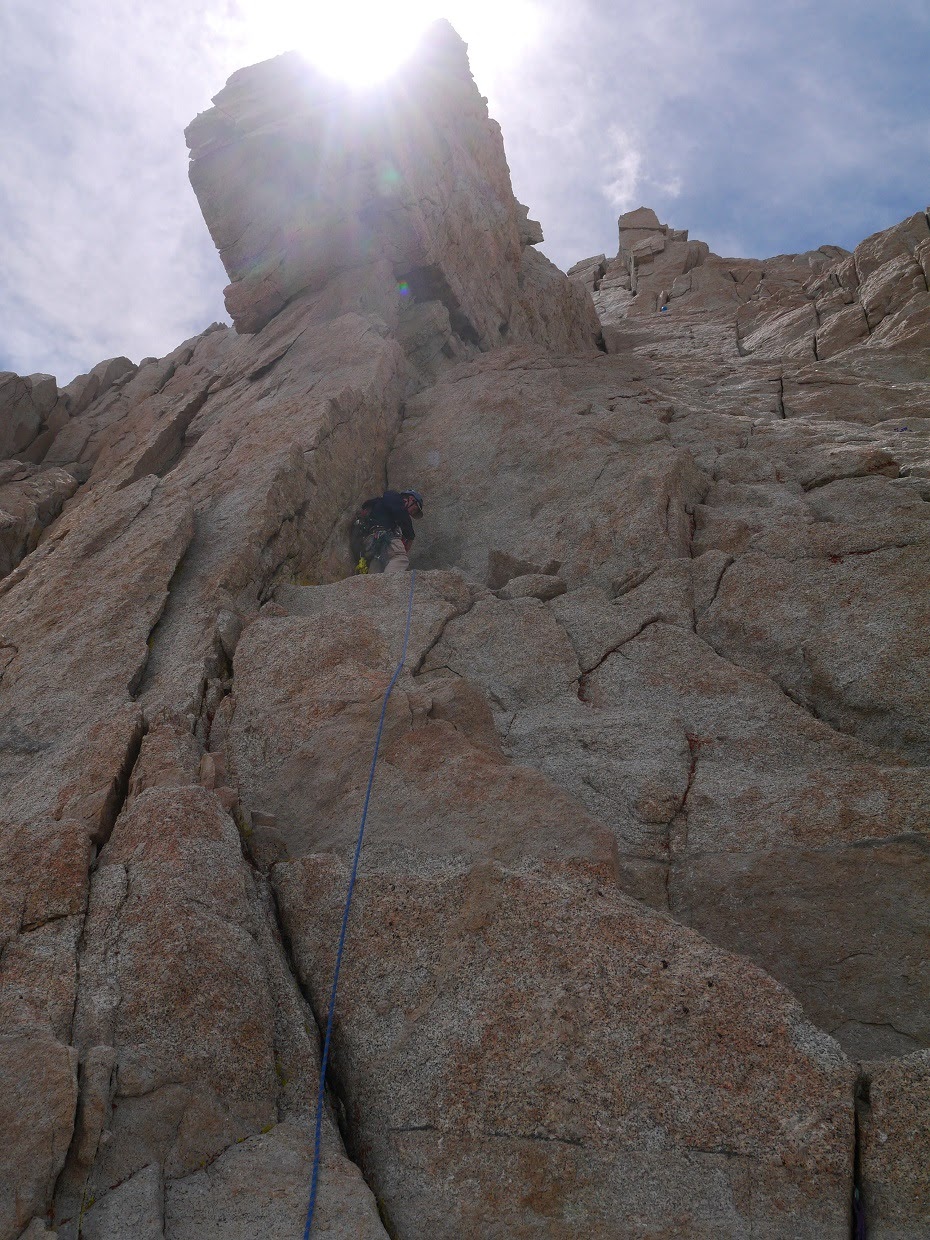 P6 (5.5-5.6) paralleled The Peewee on its right side. The climbing here was fairly easy. 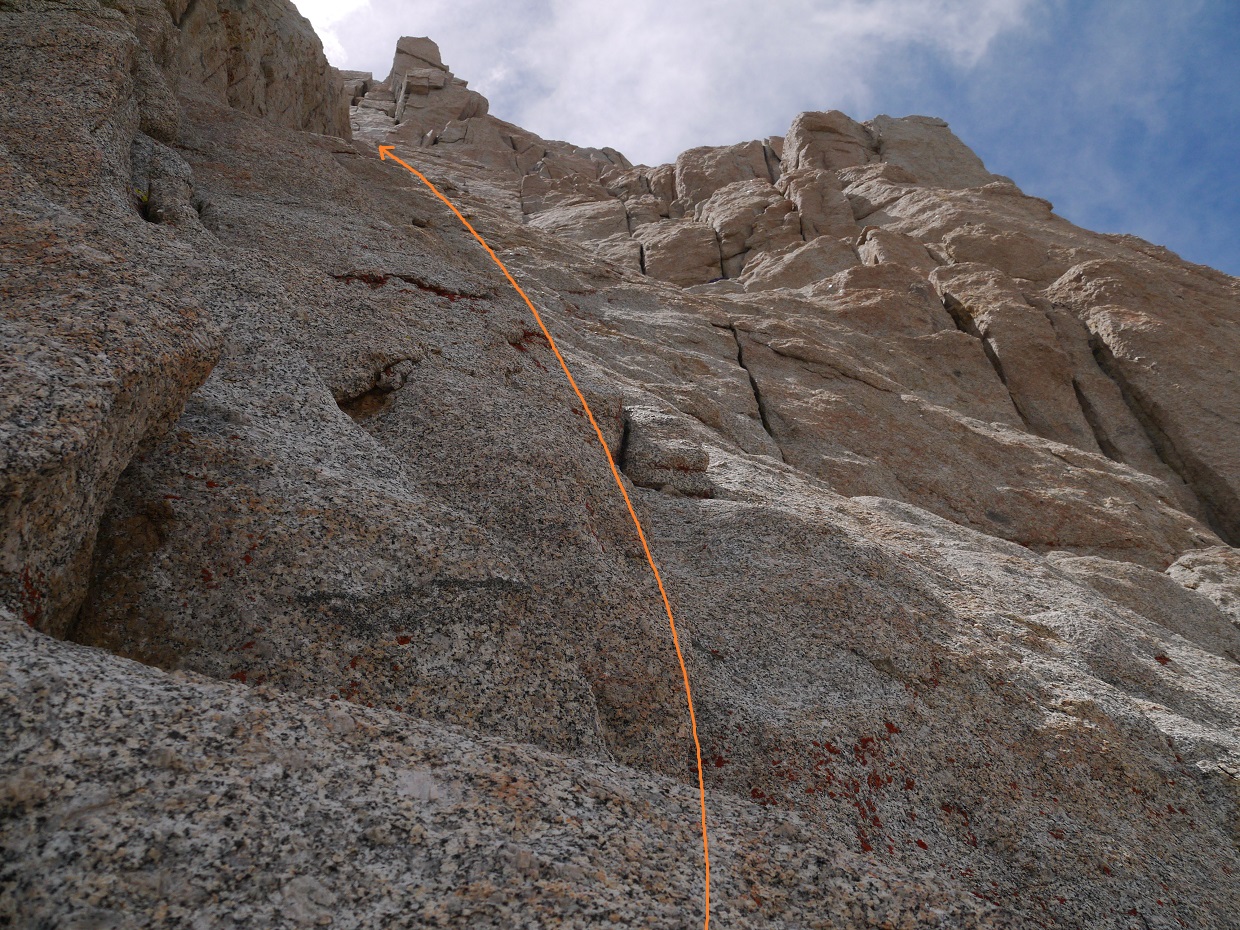 looking down P6 from the next belay station 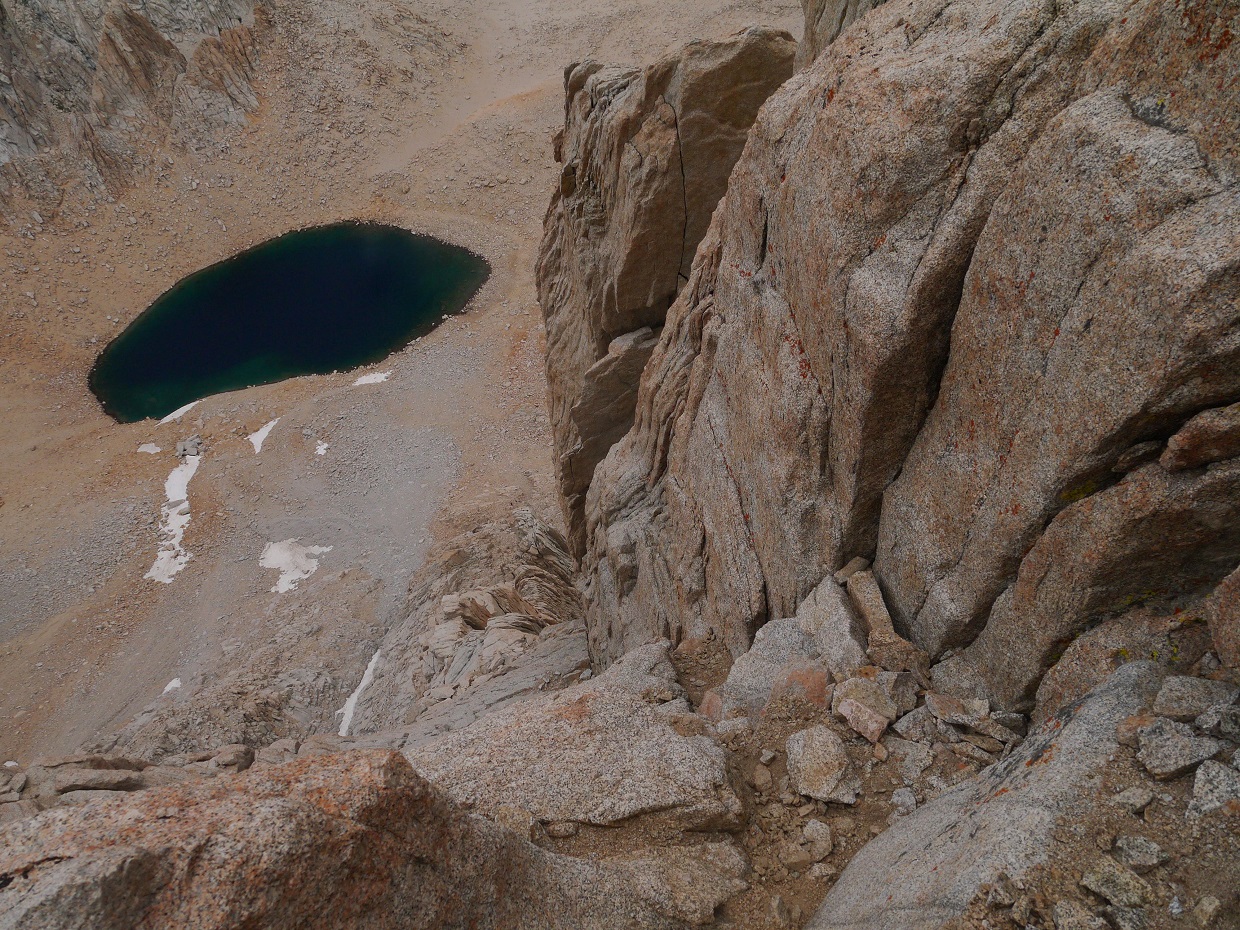 looking up P7 from the start 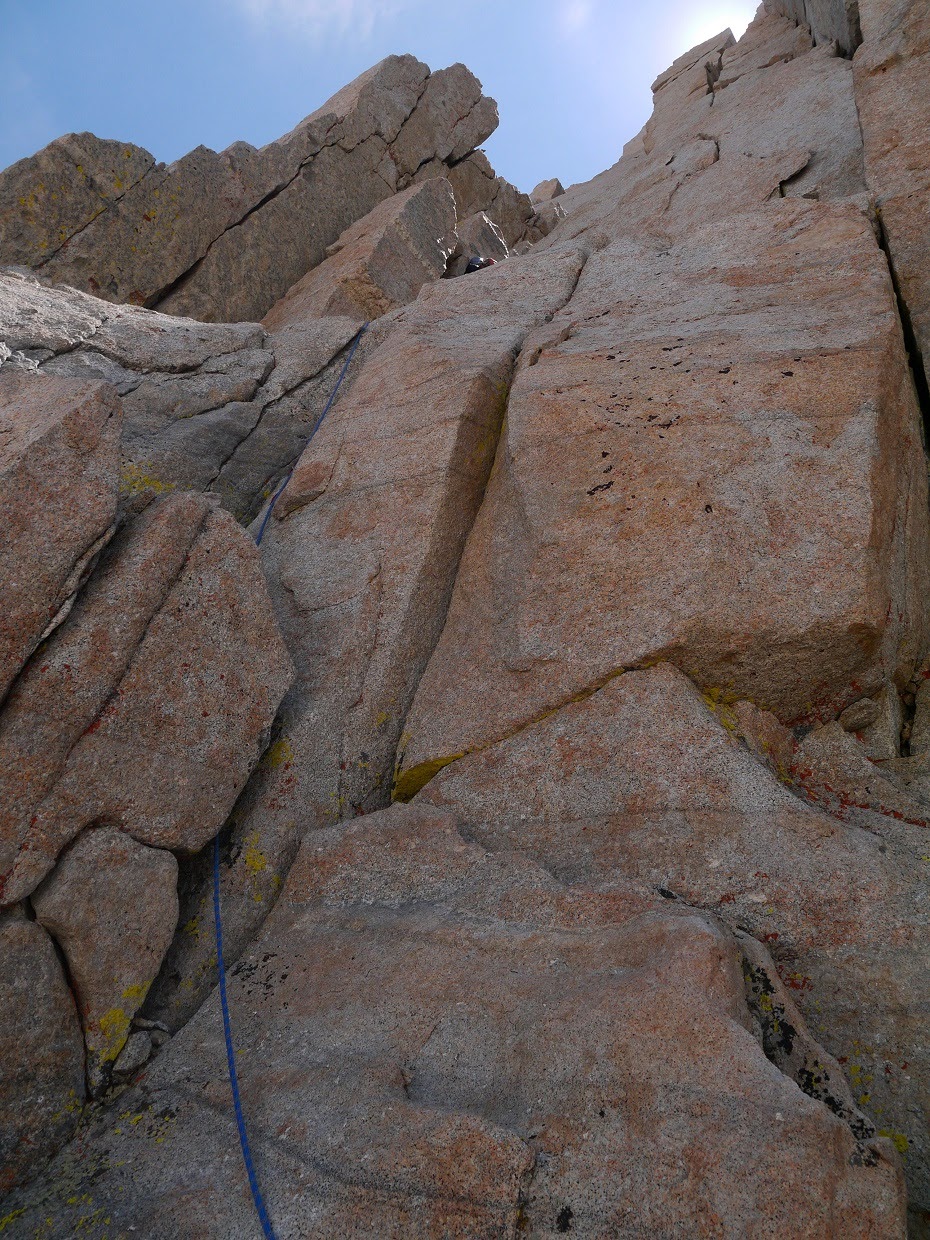 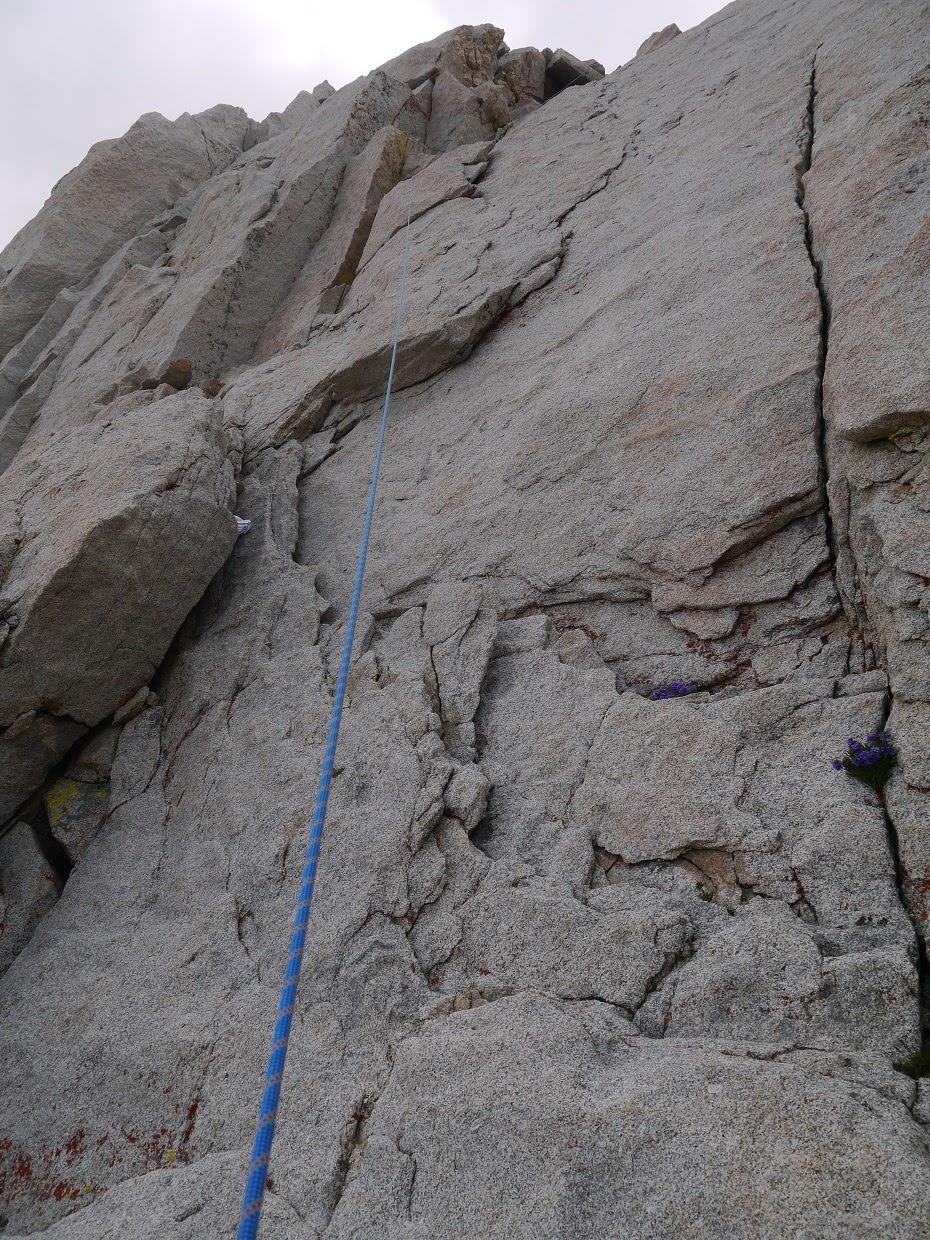 P7 marked the end of the technical climb. From here on, the terrain was mostly class 3-4 with a few possible low class 5 moves sprinkled in here and there. Although some parties still rope up for this section, most groups will just scramble it, which is what we did. The easiest terrain could be found by heading up slightly towards the left. We arrived on Whitney's summit (which was surprisingly deserted) about 15 minutes later after coiling up the rope. It had begun snowing lightly. 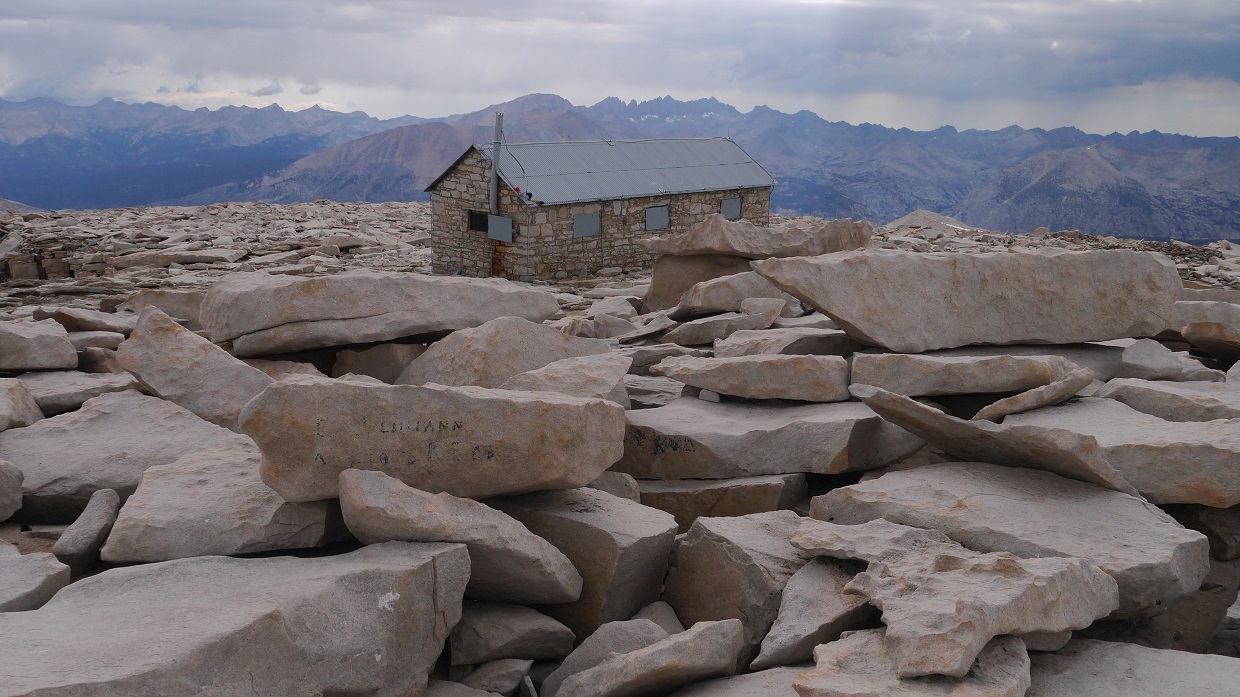 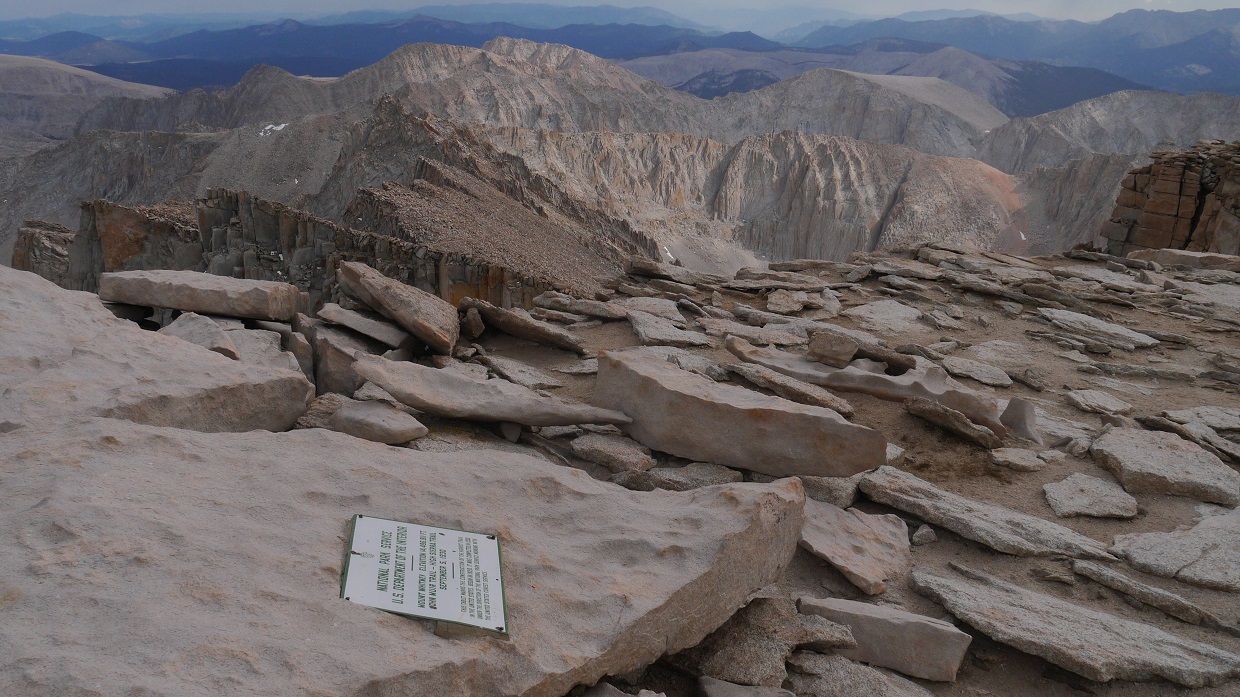 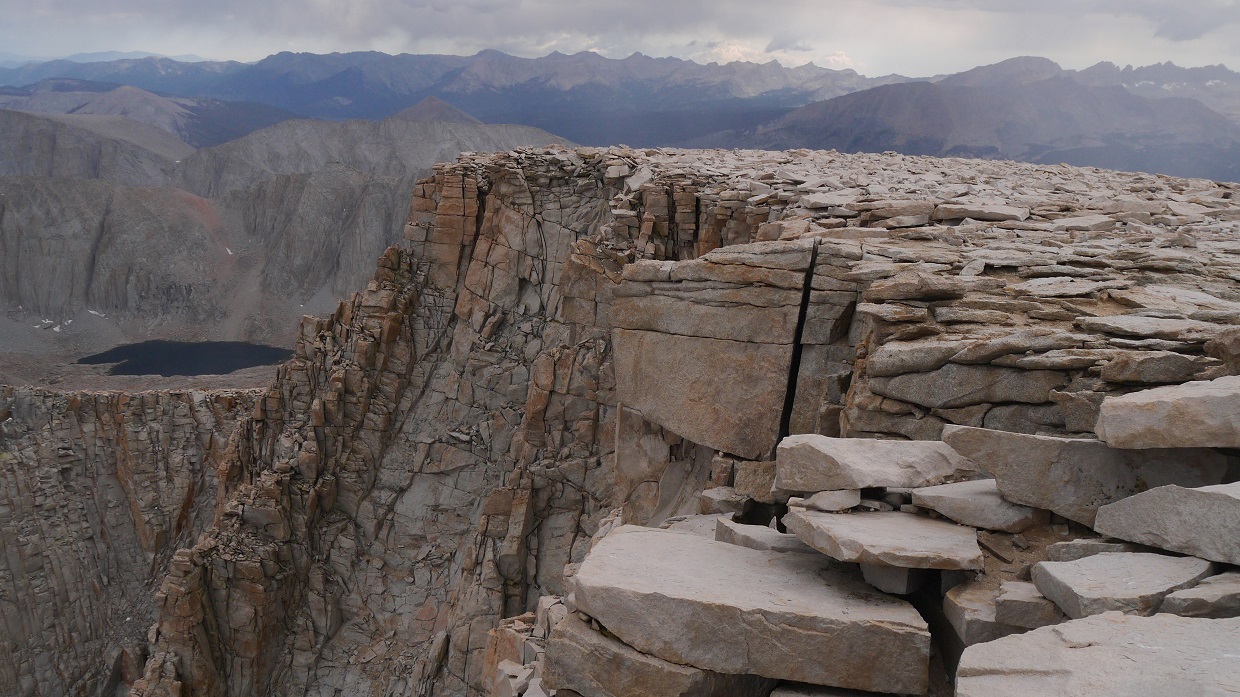 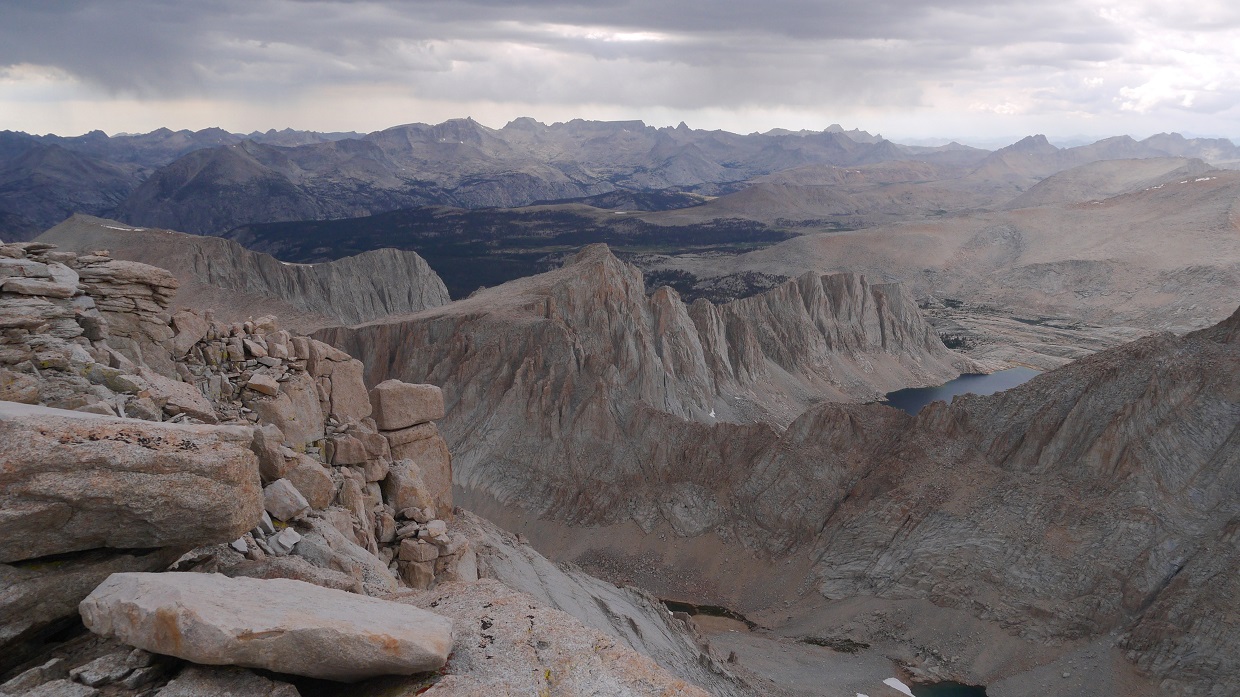 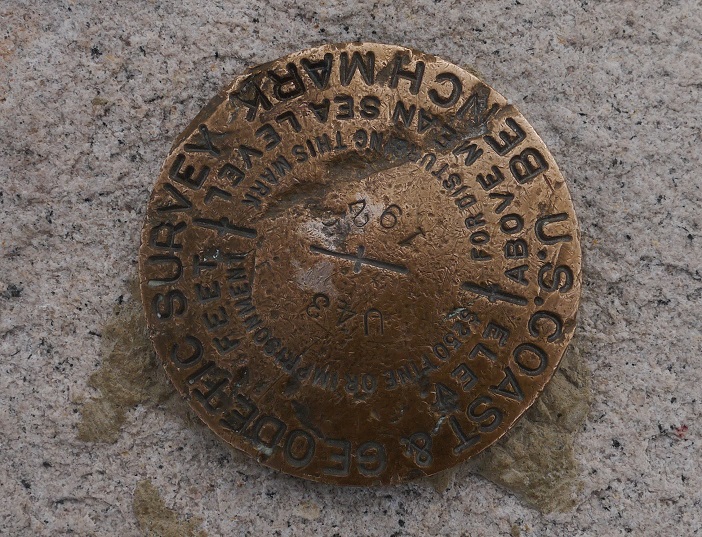 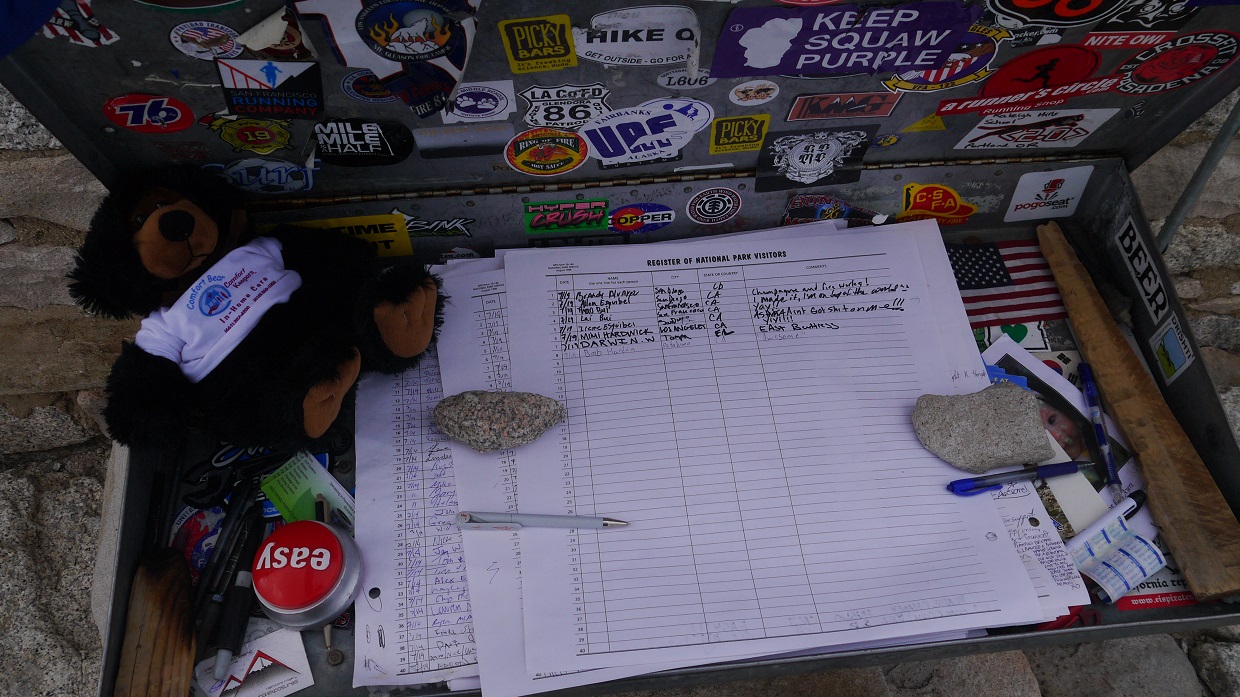 We descended Whitney via the Mountaineer's Route, heading down a class 3 gully on the north side of the mountain to a large notch.

looking down towards the notch 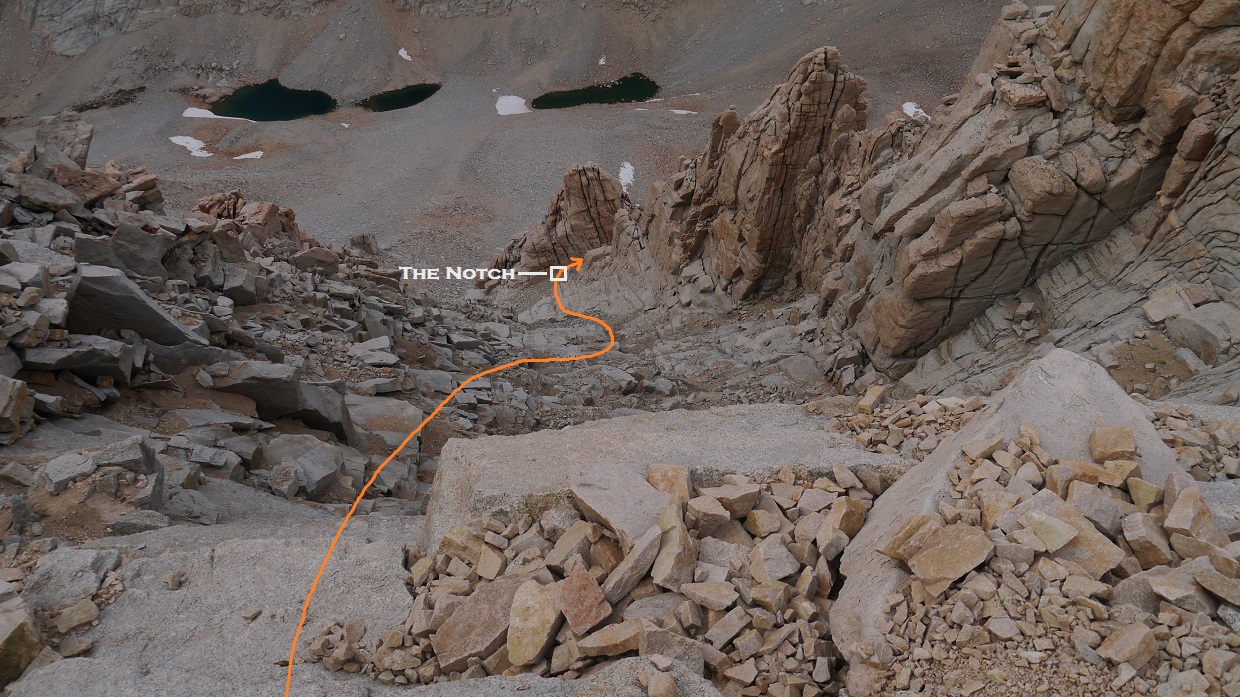 From the notch, a quick descent east down the large famous Mountaineer's Route gully put us at Iceberg Lake, where we retraced our steps to the trailhead, arriving back just after sunset. 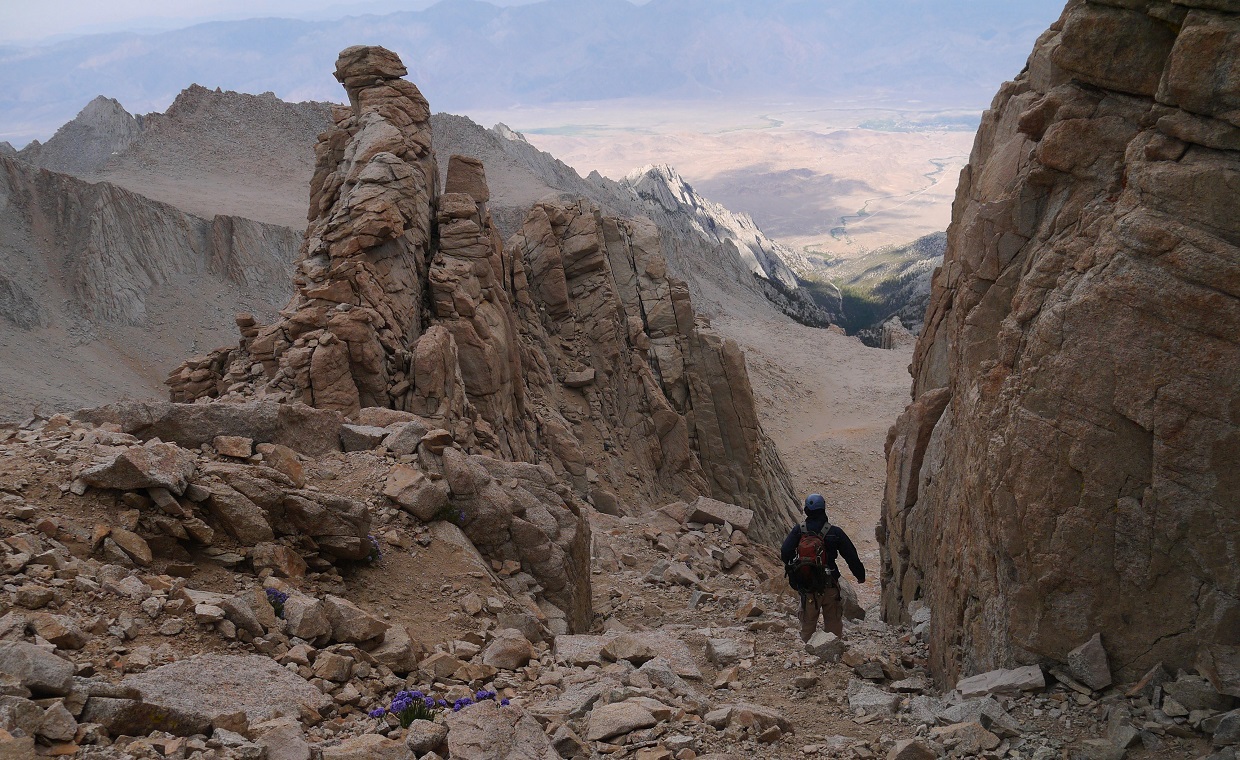 heading down the large gully 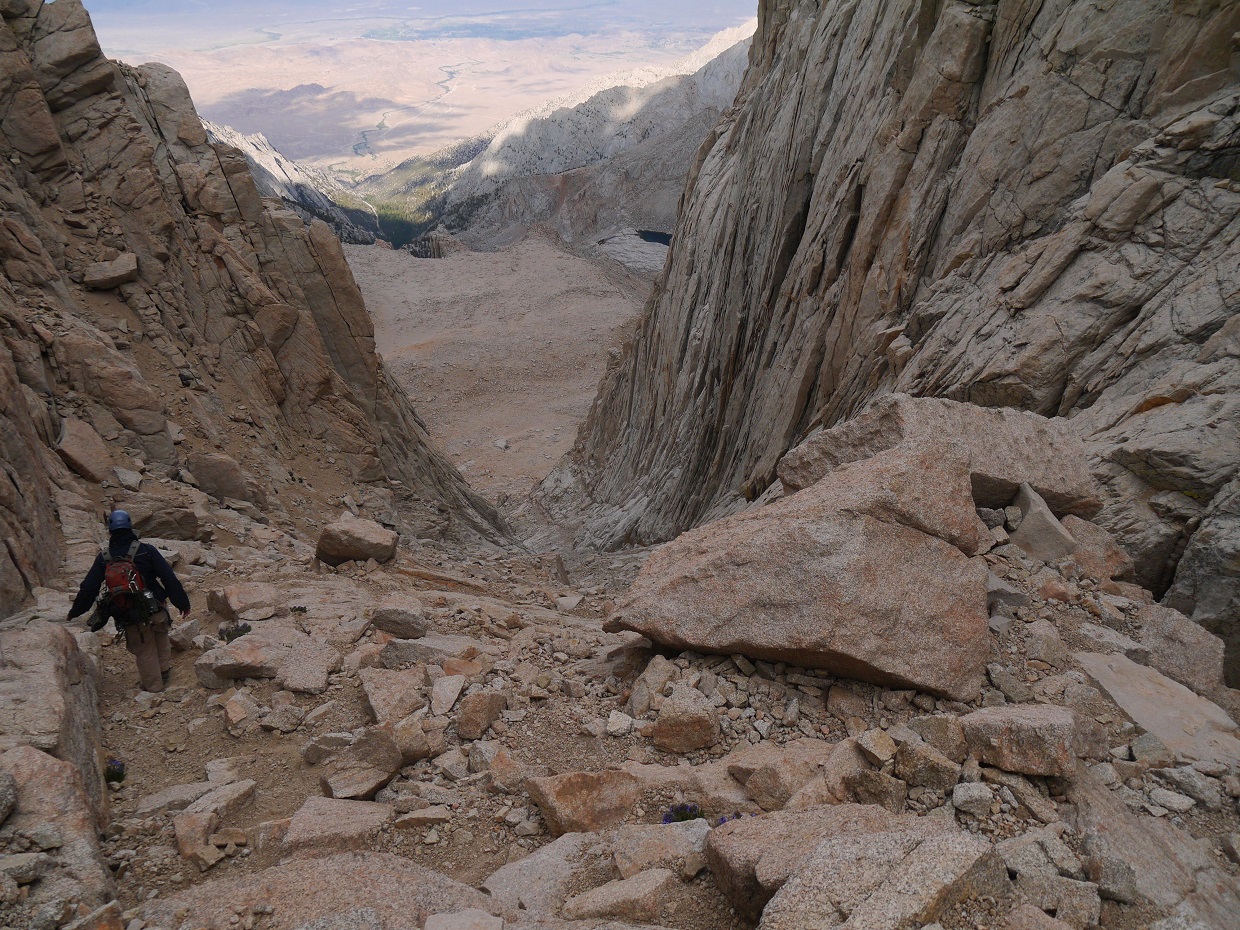