back to Blackcap Traverse
home page

July 13, 2014
It was sometime around 8am as Michael and I set out from the dusty parking lot (9,280 ft) at North Lake, walking about half a mile up the road to the Paiute/Lamarck Trailhead (9,360 ft). Even at over 9,000 ft of elevation, the temperature was already in the mid 70s and rising steadily. It was going to be a warm day. From the trailhead, the Paiute Pass Trail gradually ascended 4.7 miles along the North Fork of Bishop Creek to Paiute Pass (11,400 ft), passing by several shallow alpine lakes and grassy meadows along the way. 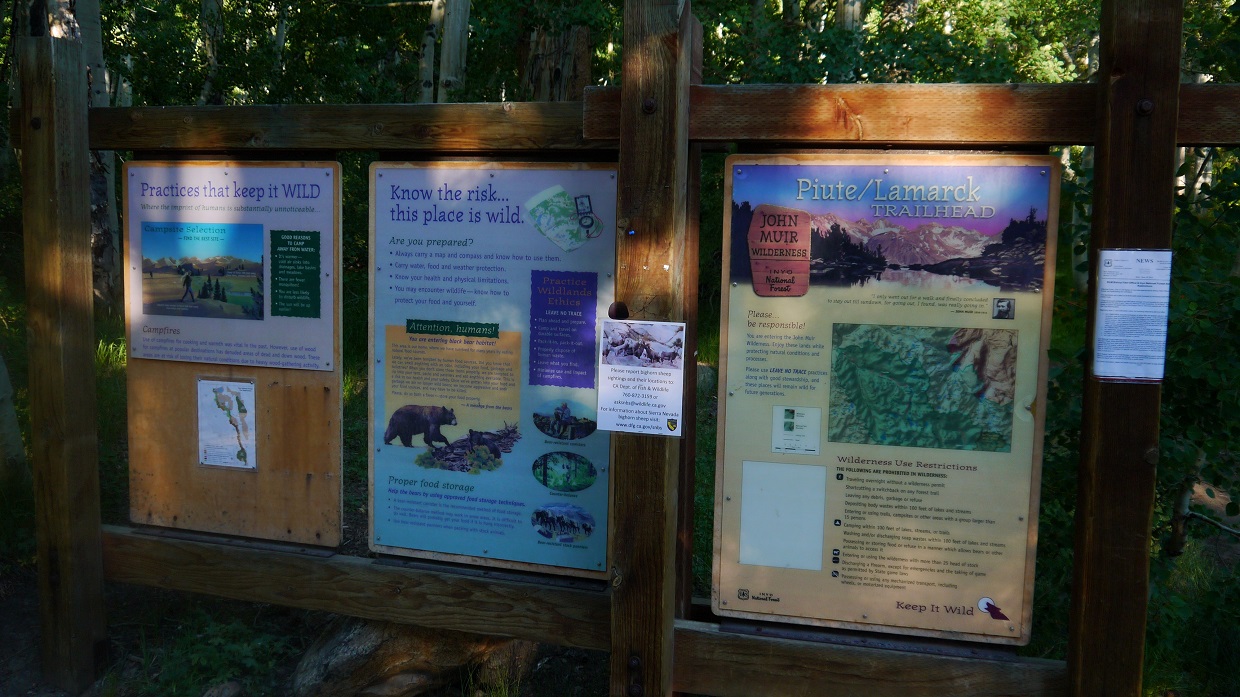 heading up to Paiute Pass 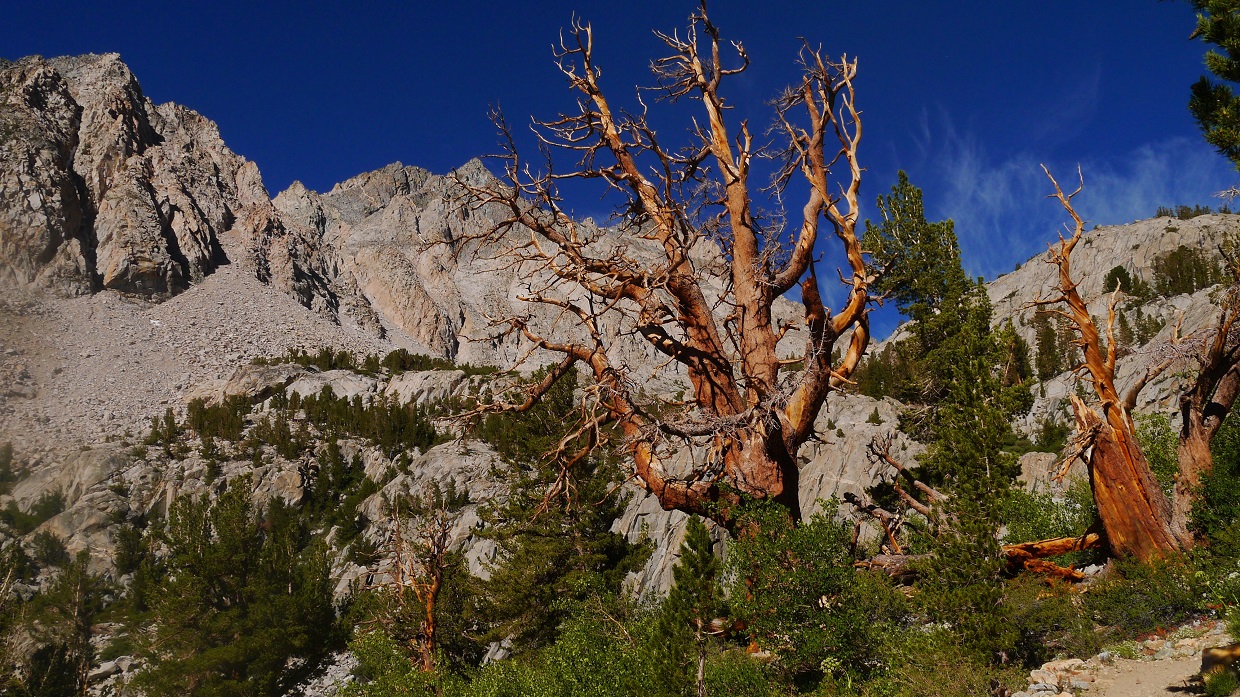 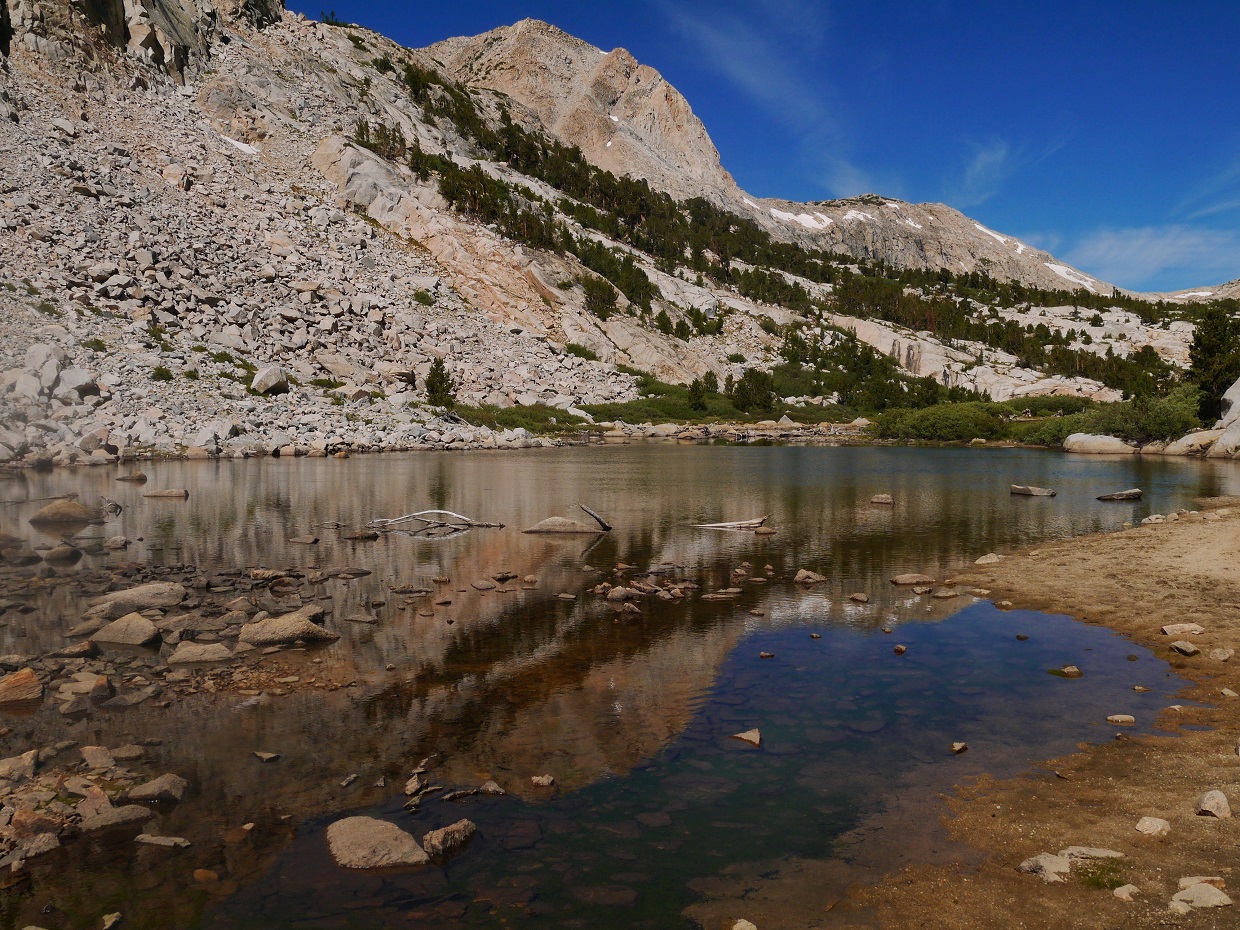 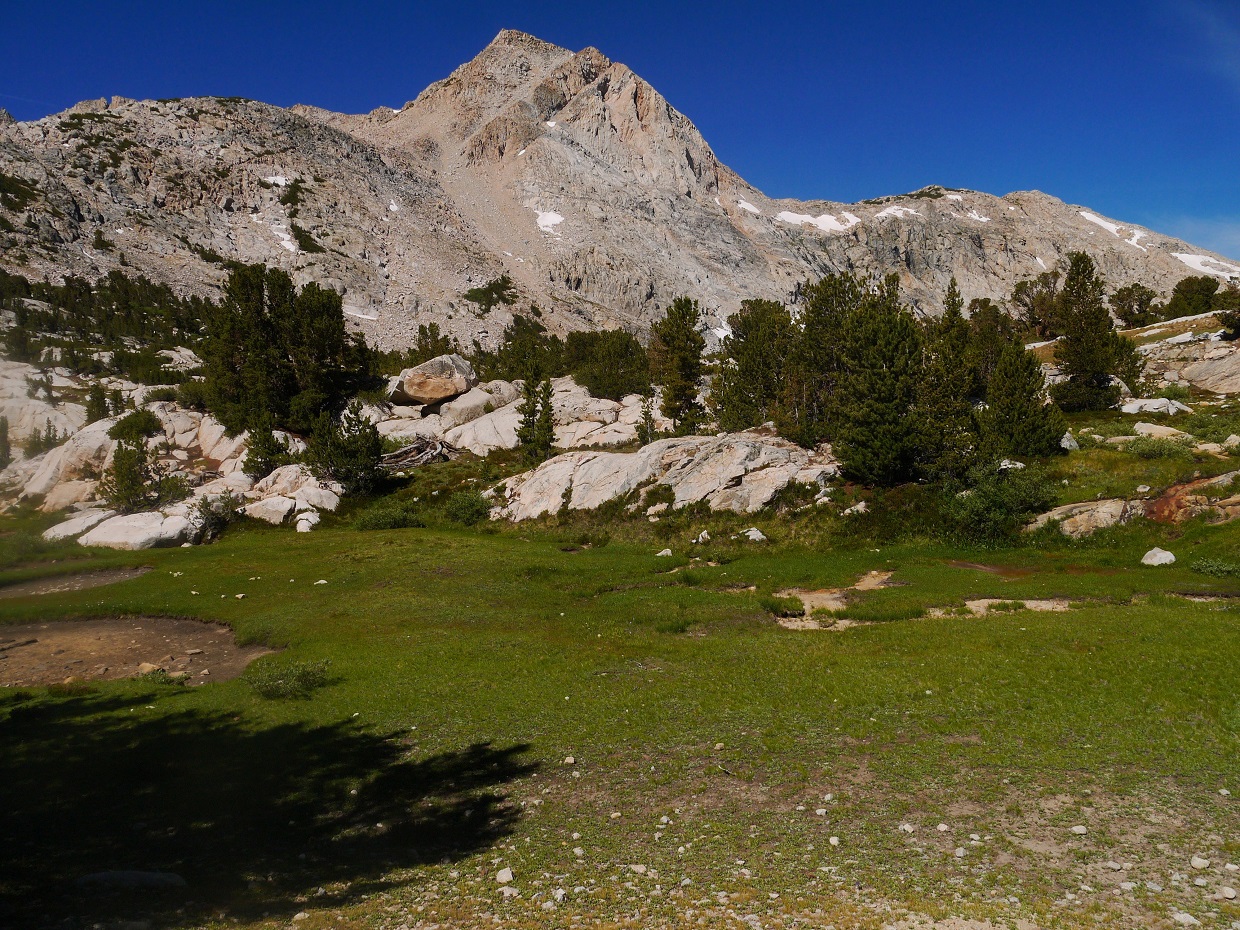 We reached Paiute Pass sometime around 10:45am and were relieved from the heat by a strong cool breeze which blew in from the west. Since Michael wanted to acclimate to the altitude, we lingered around at the pass for about an hour taking naps.

looking towards Summit Lake on the west side of Paiute Pass 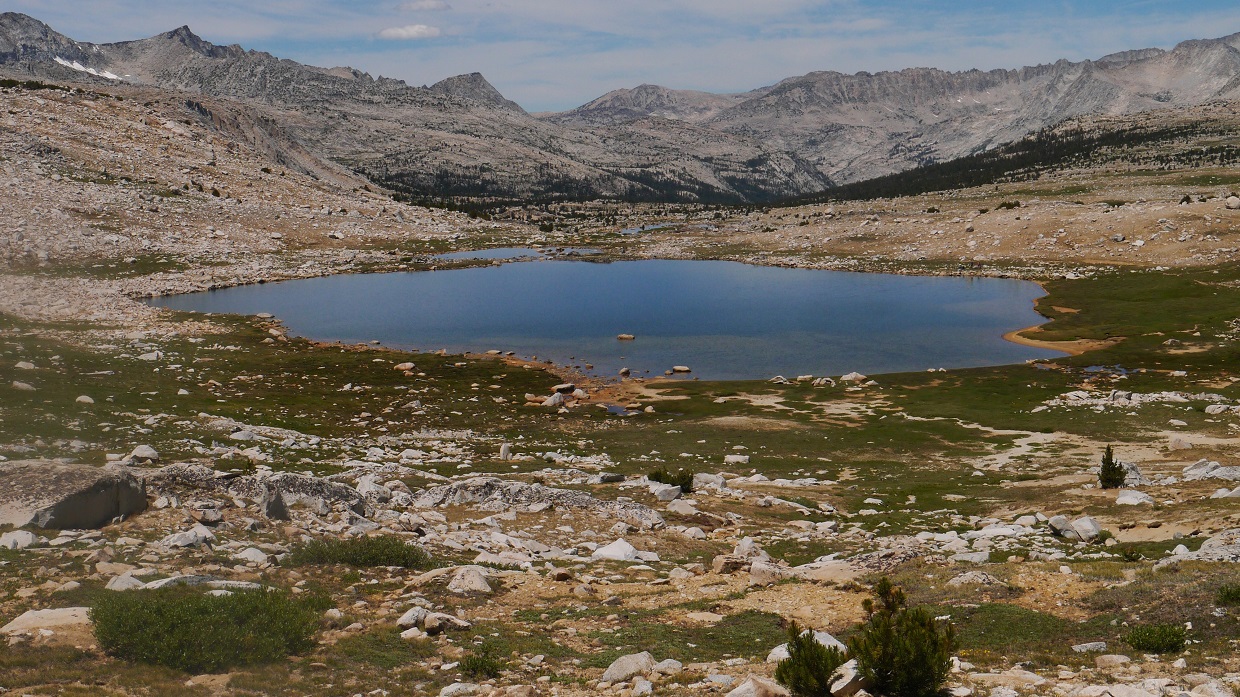 The Paiute Pass Trail continued on west of the pass, descending 11.9 miles at a very gradual grade down Paiute Canyon to the John Muir Trail (8,080 ft). The rolling hills of alpine tundra were soon replaced by coniferous forest. To the south, the powerful Paiute Creek thundered along its banks. 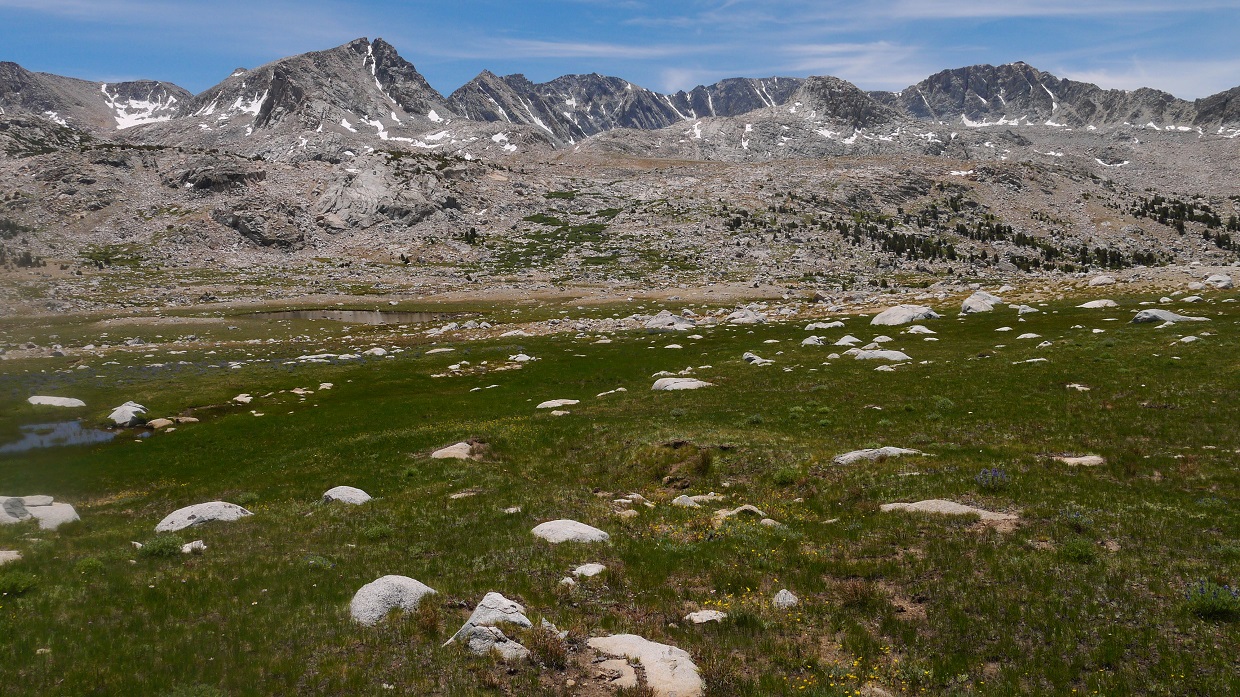 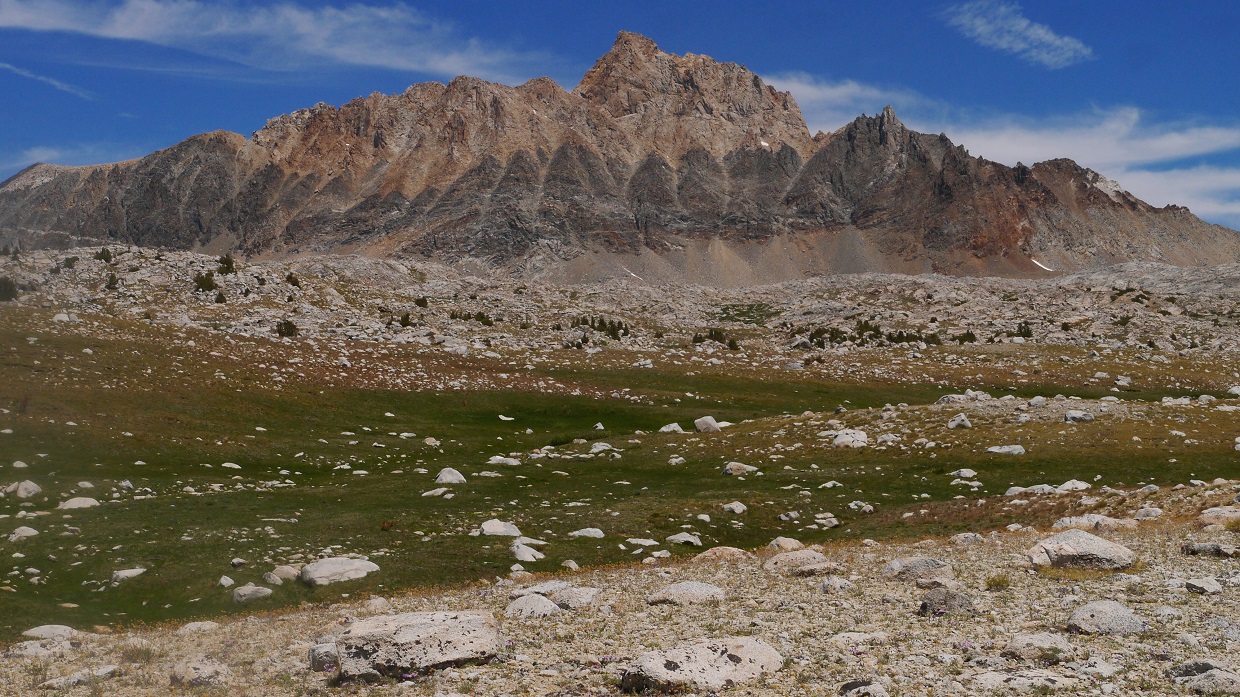 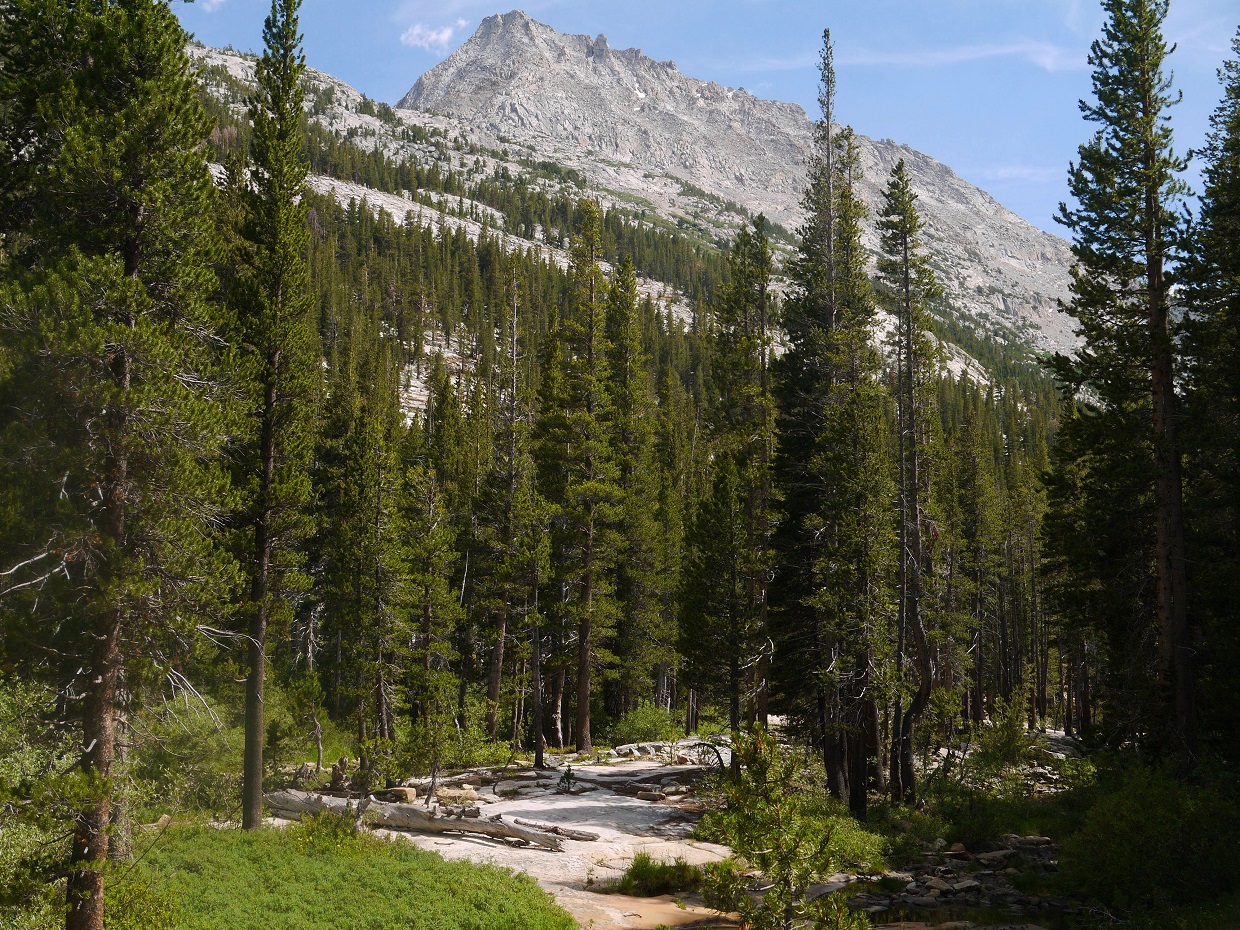 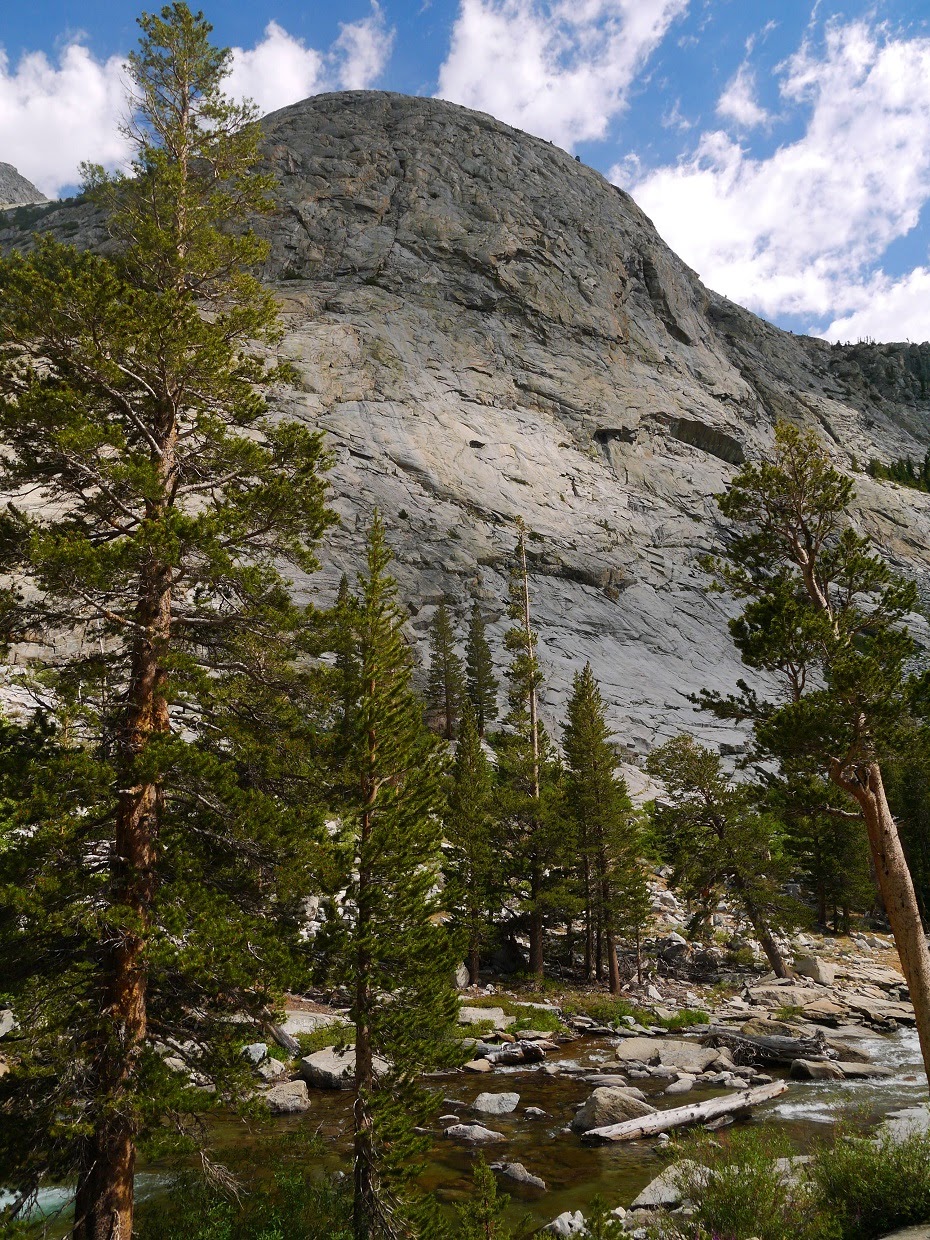 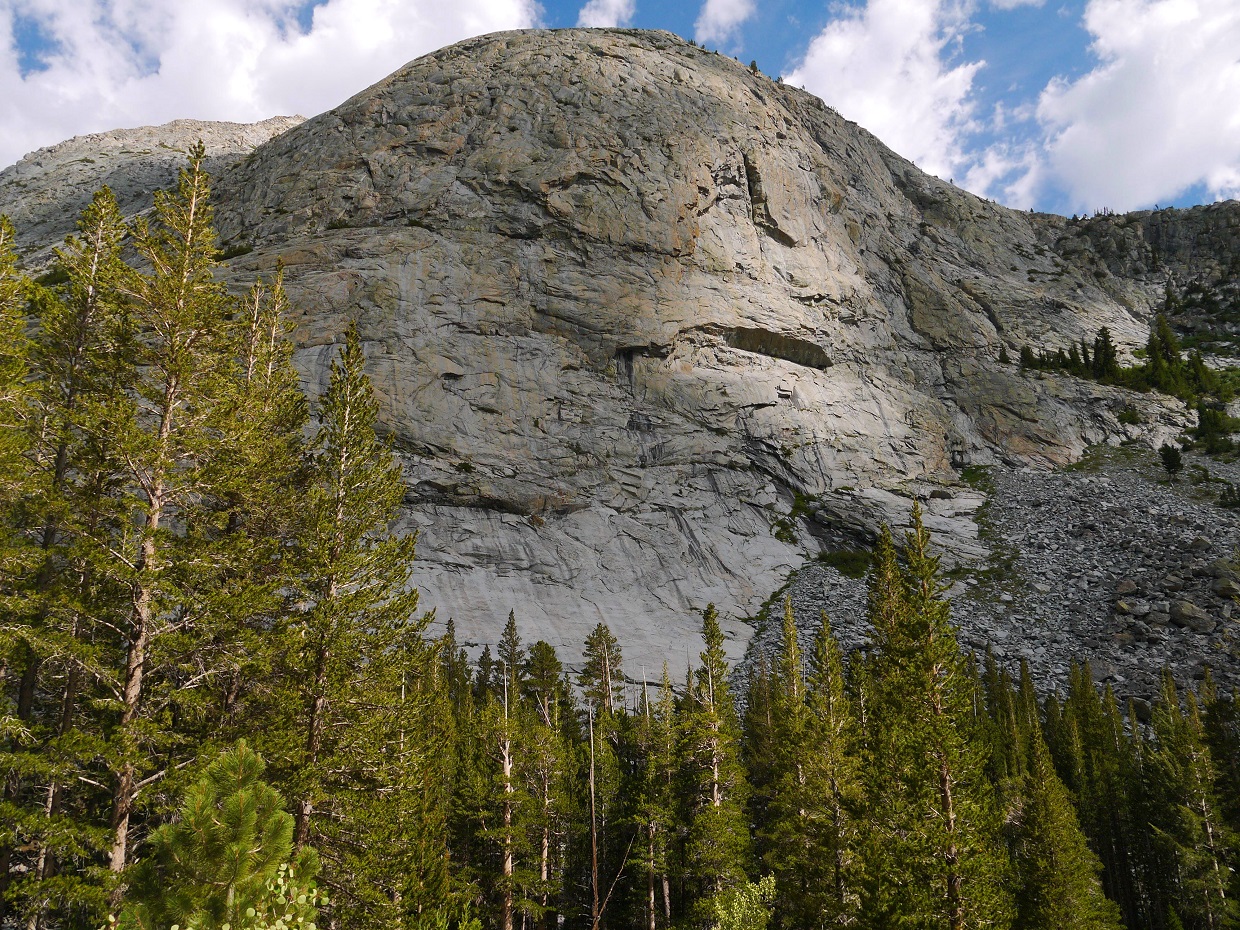 A few miles before intersecting the JMT, the massive profile of the LeConte Divide came into view to the south. 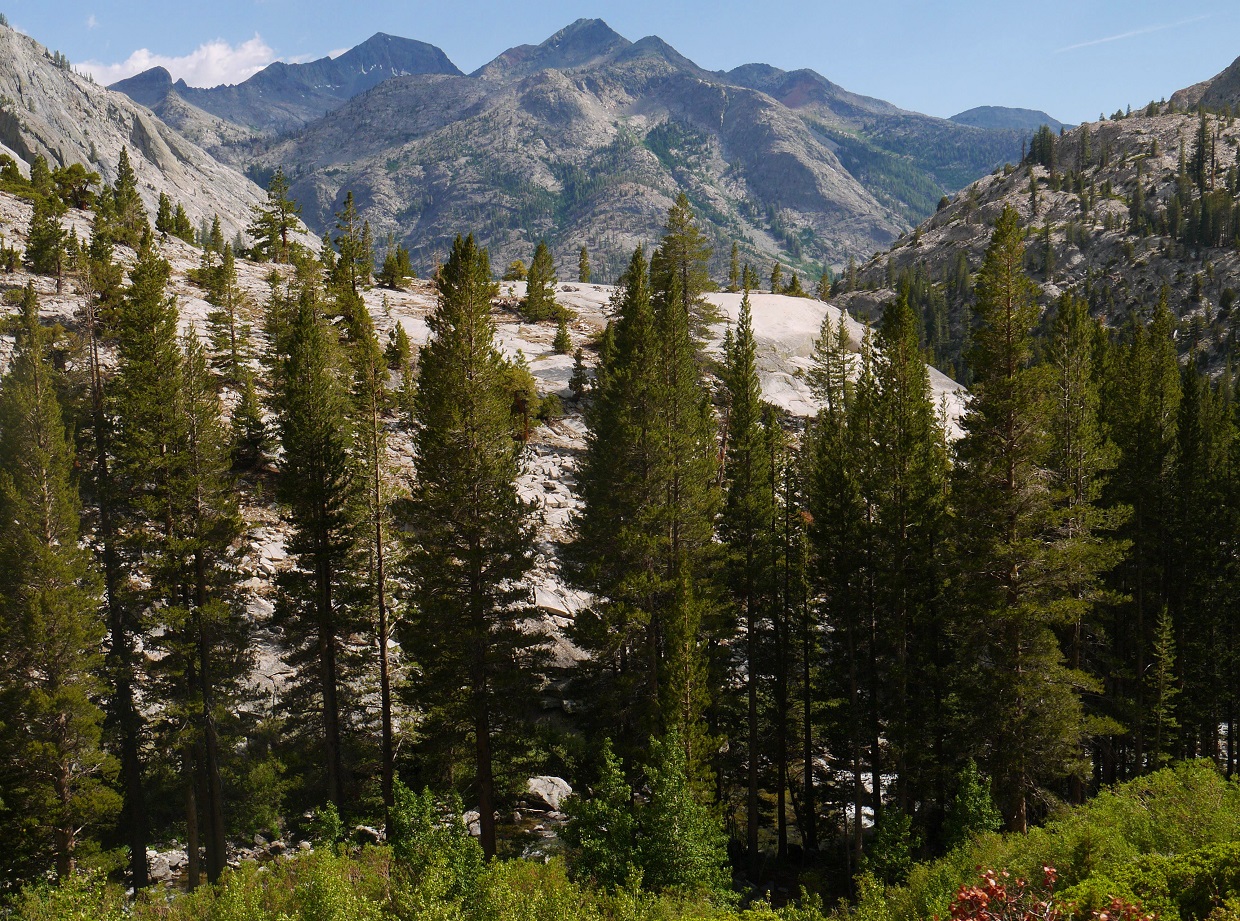 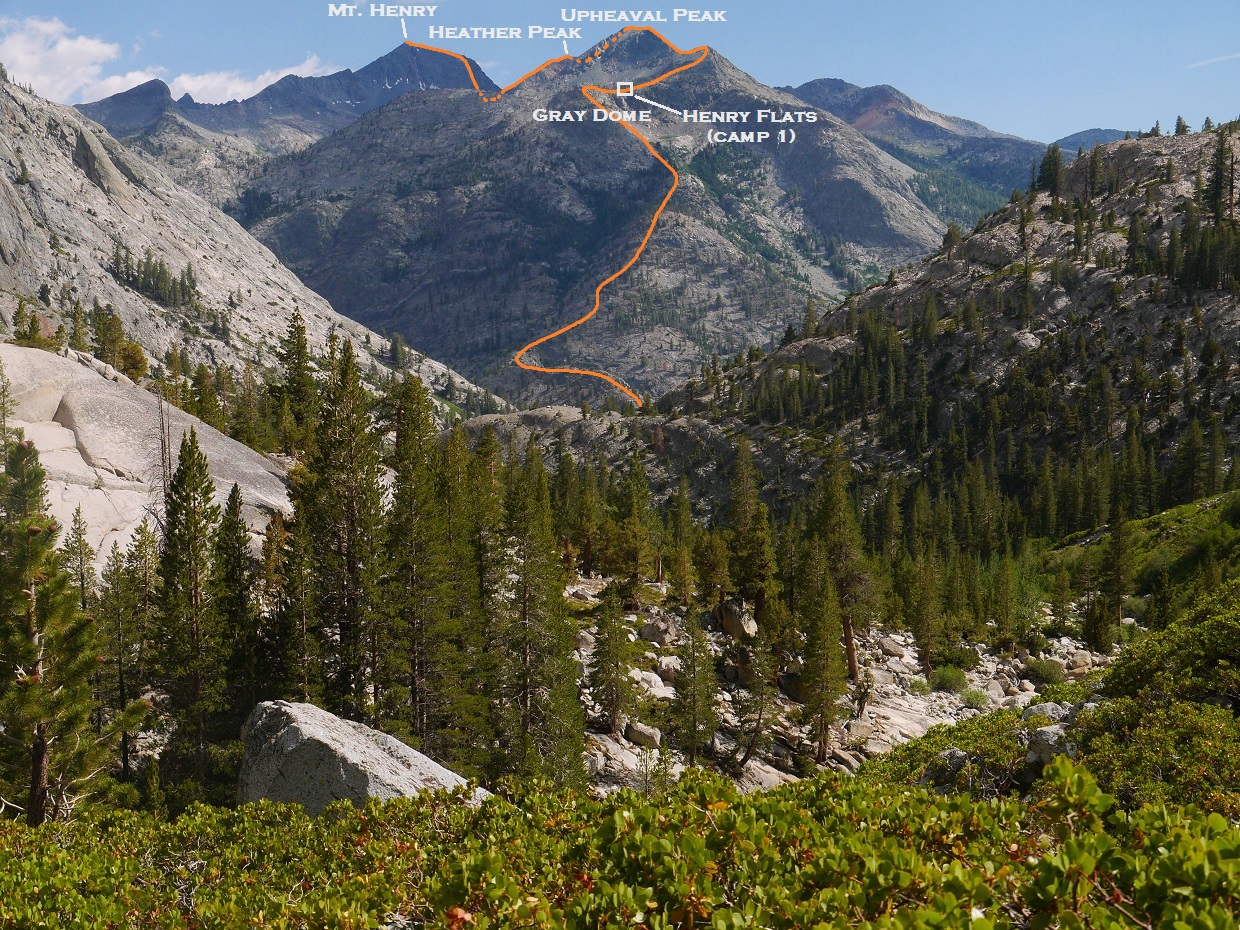 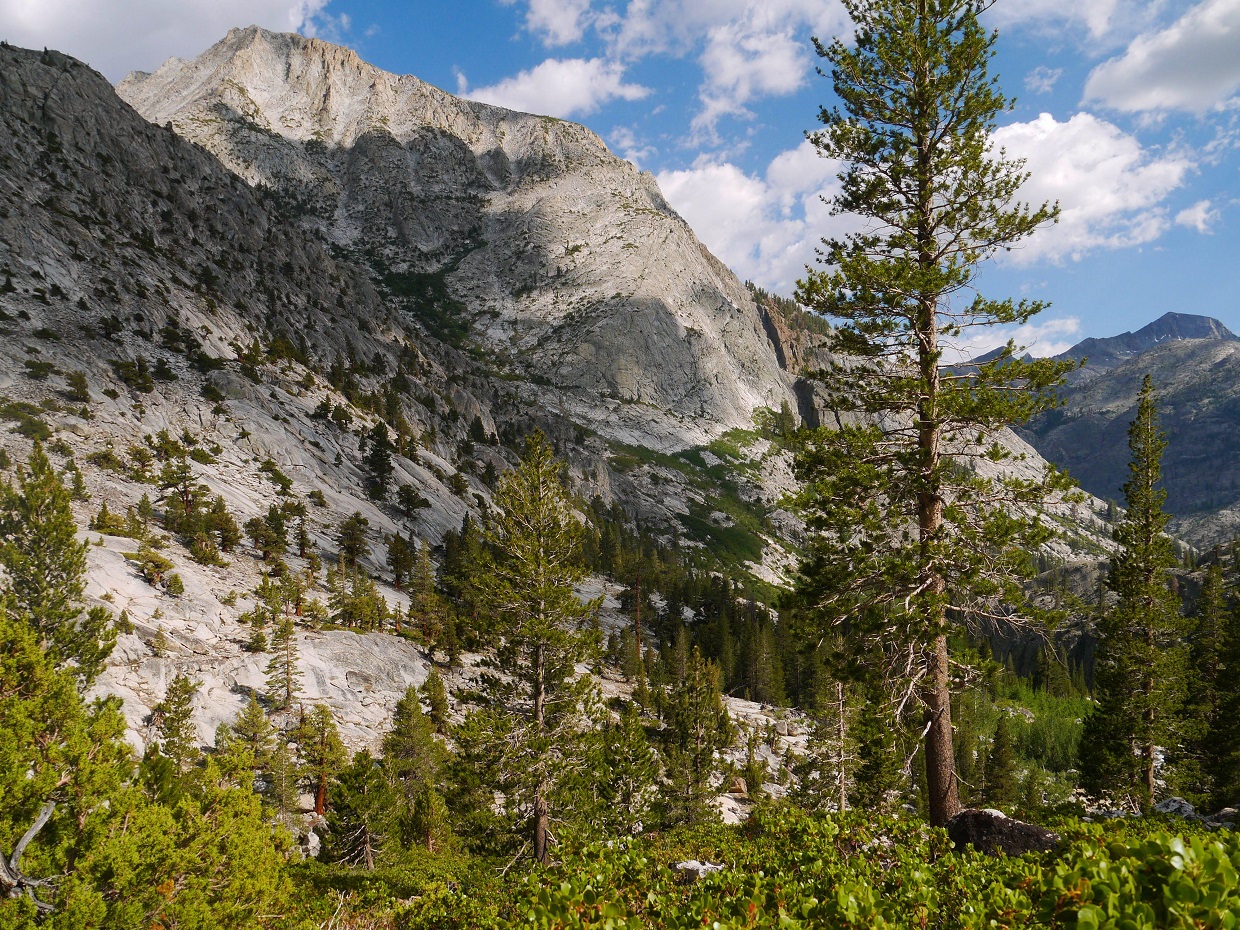 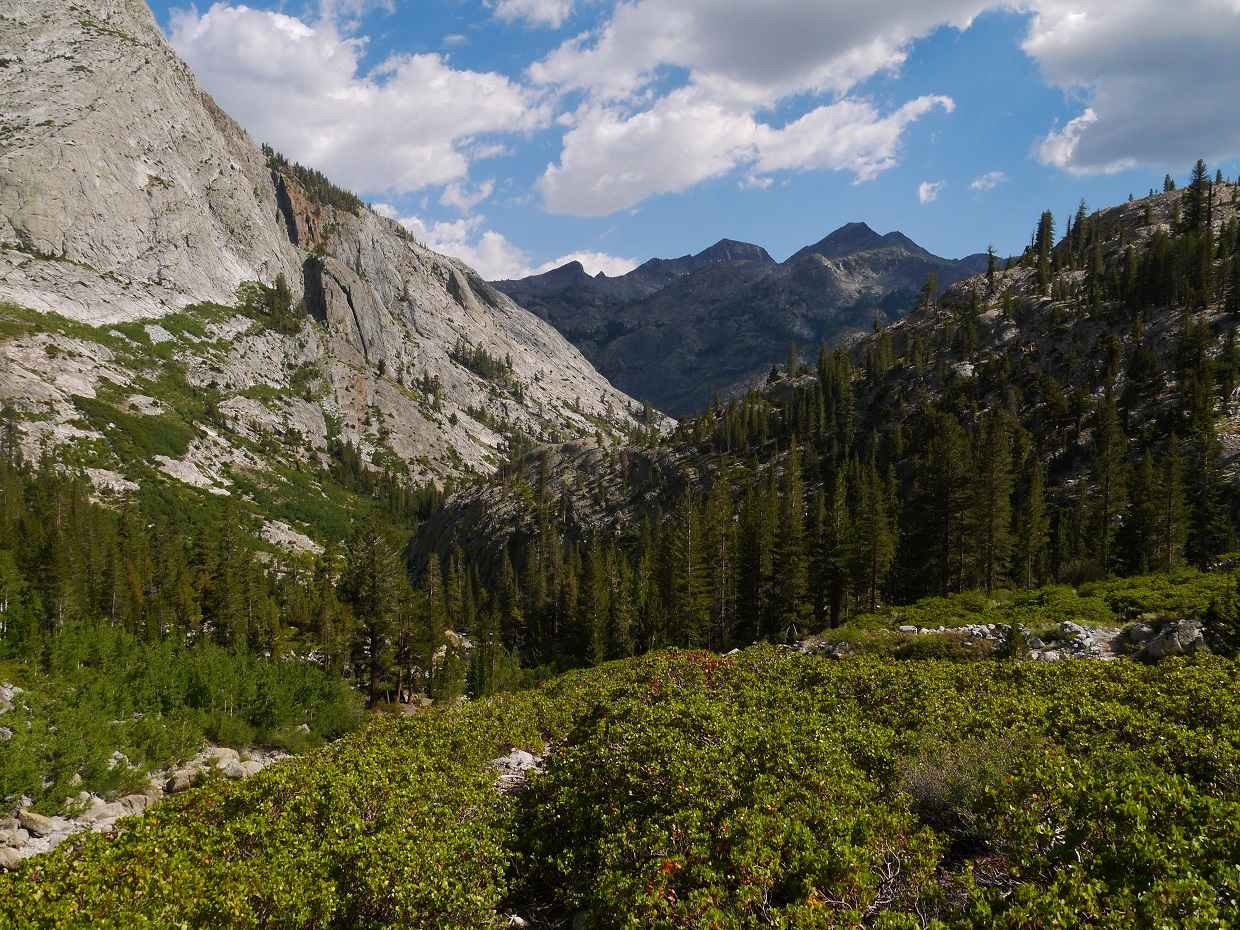 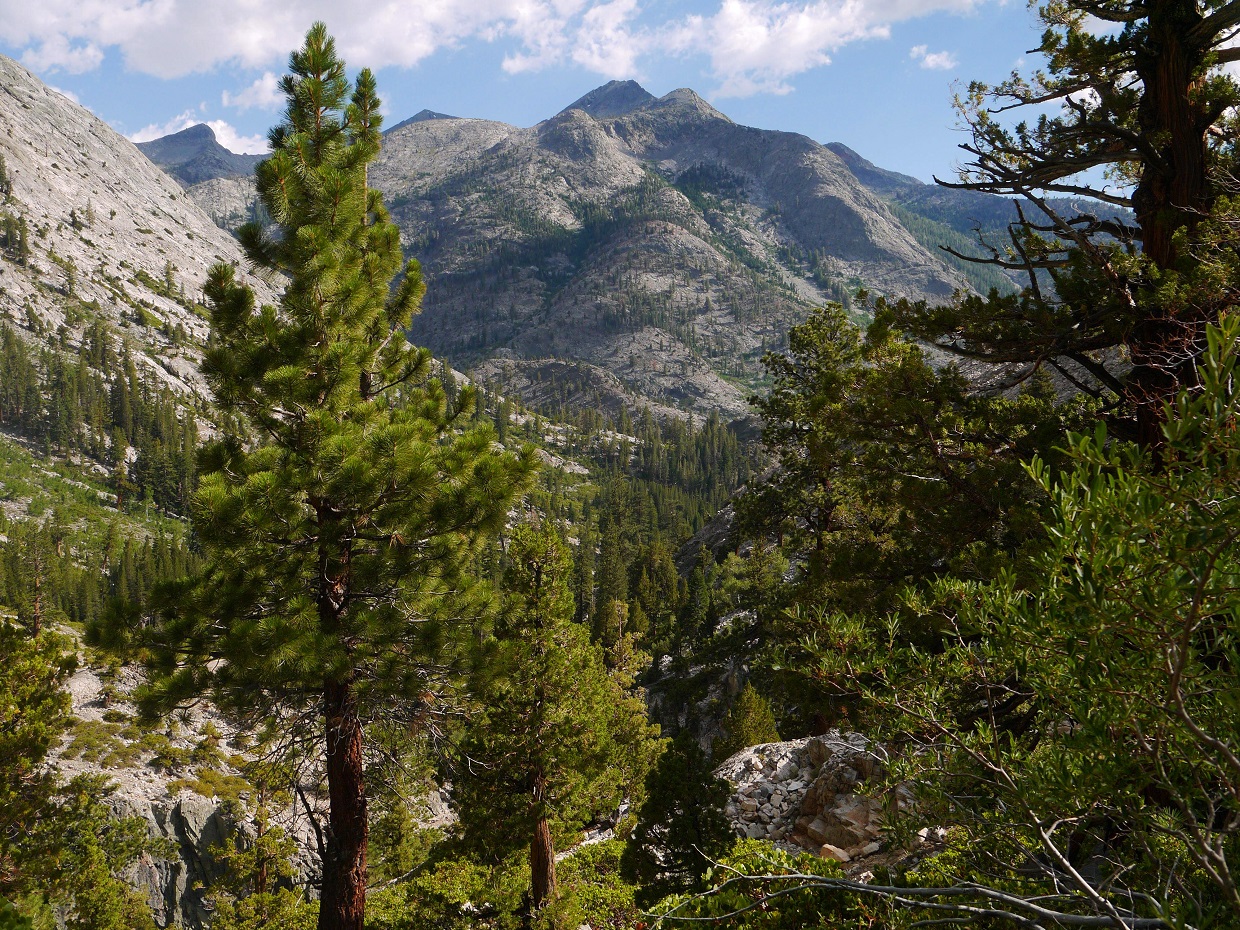 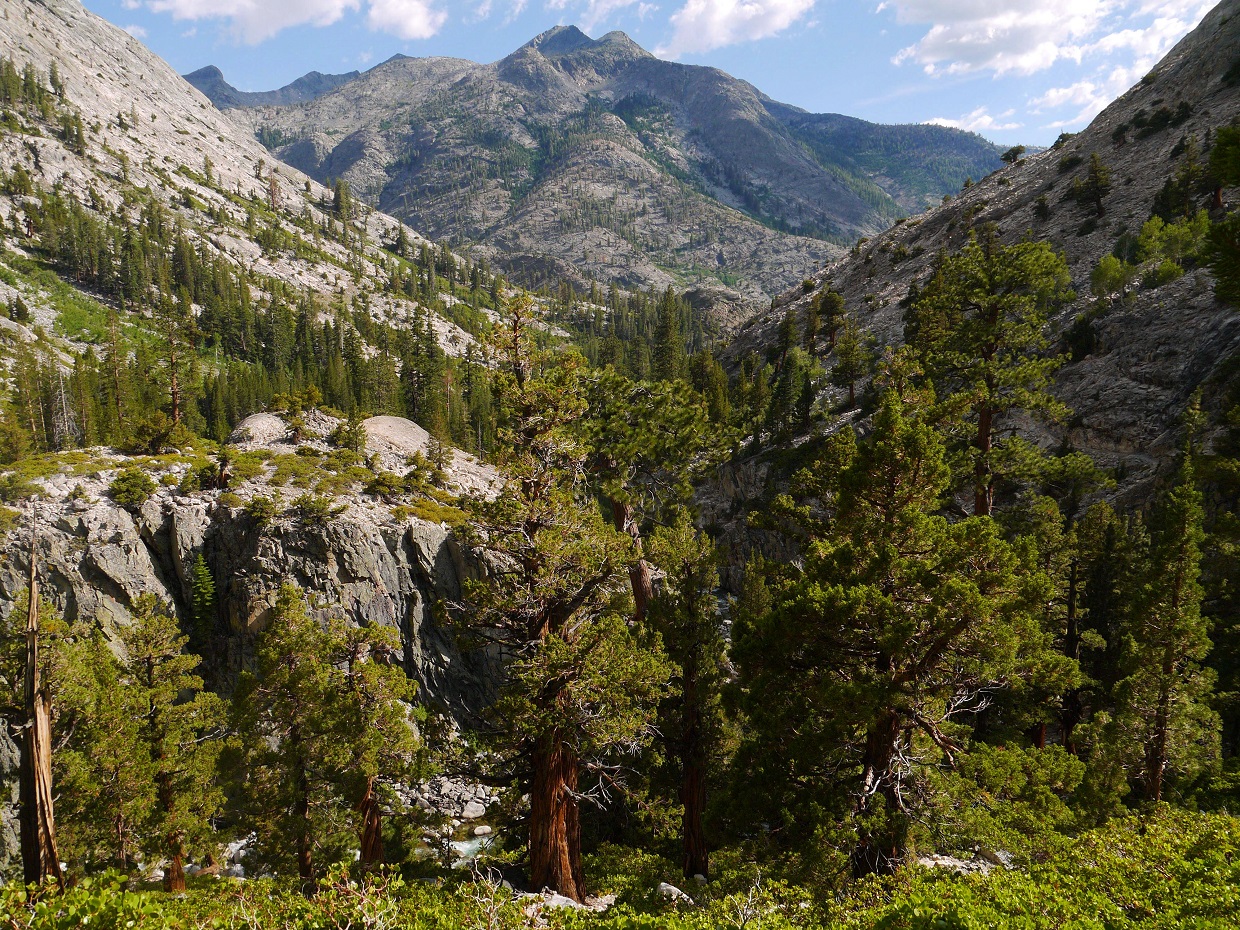 The Paiute Pass Trail intersected the JMT where a large footbridge crossed to the south side of Paiute Creek. A sign on the south side of the bridge indicated that we were entering Kings Canyon National Park. We headed south on the JMT for about a tenth of a mile, then took off cross country south to cross the San Joaquin River before accessing the toe of the LeConte Divide immediately on the other side. 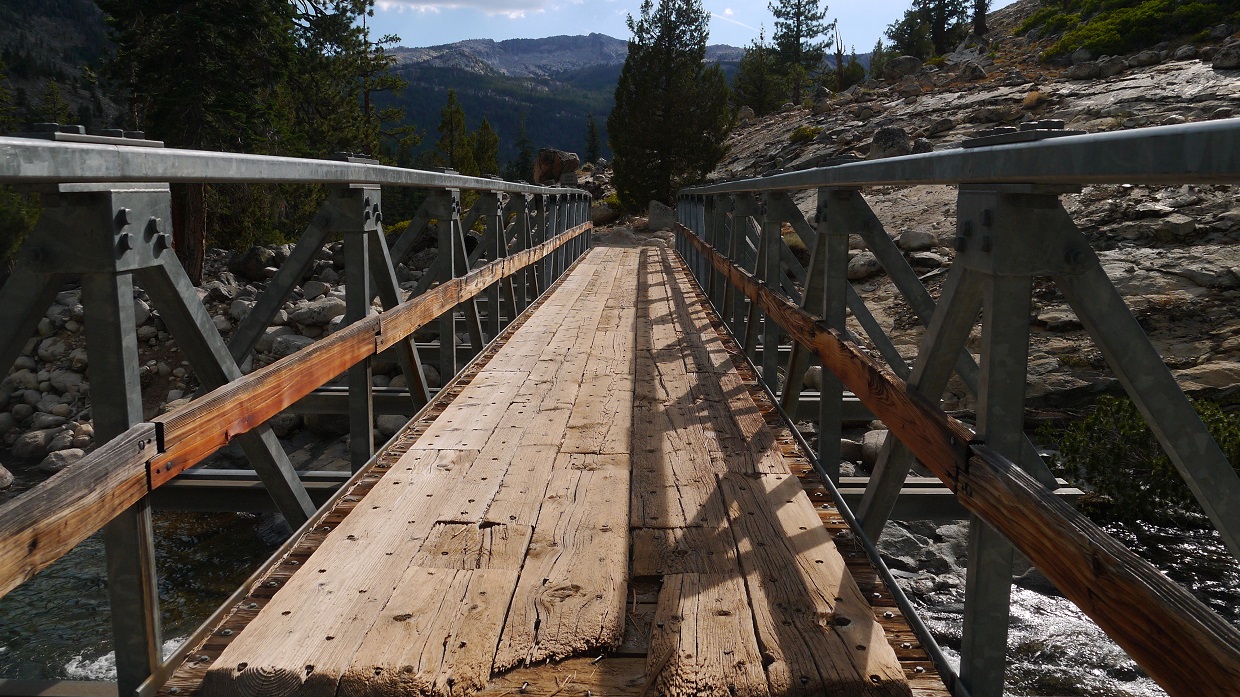 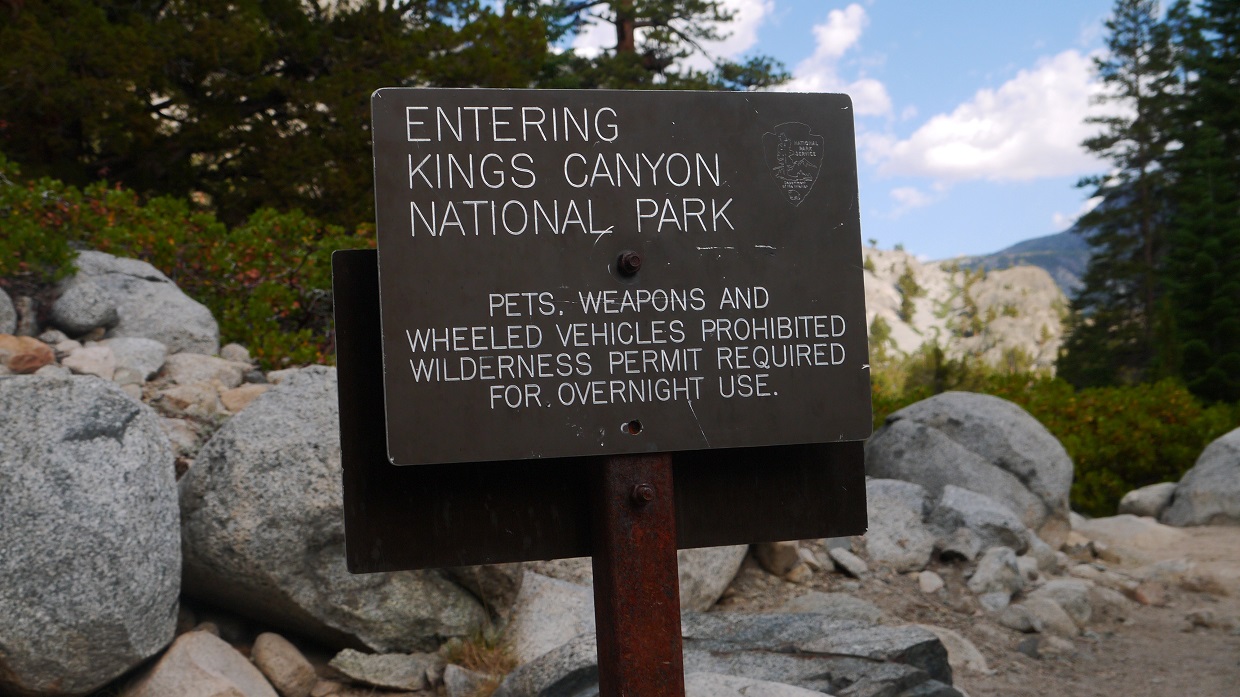 The toe of the LeConte Divide was a small spur ridge which branched north from the divide, running in a NW to SE direction. As the spur ridge merged into the the main ridge, we continued up in a general southern direction on steep terrain, heading for a very recognizable feature which I dubbed "Gray Dome." 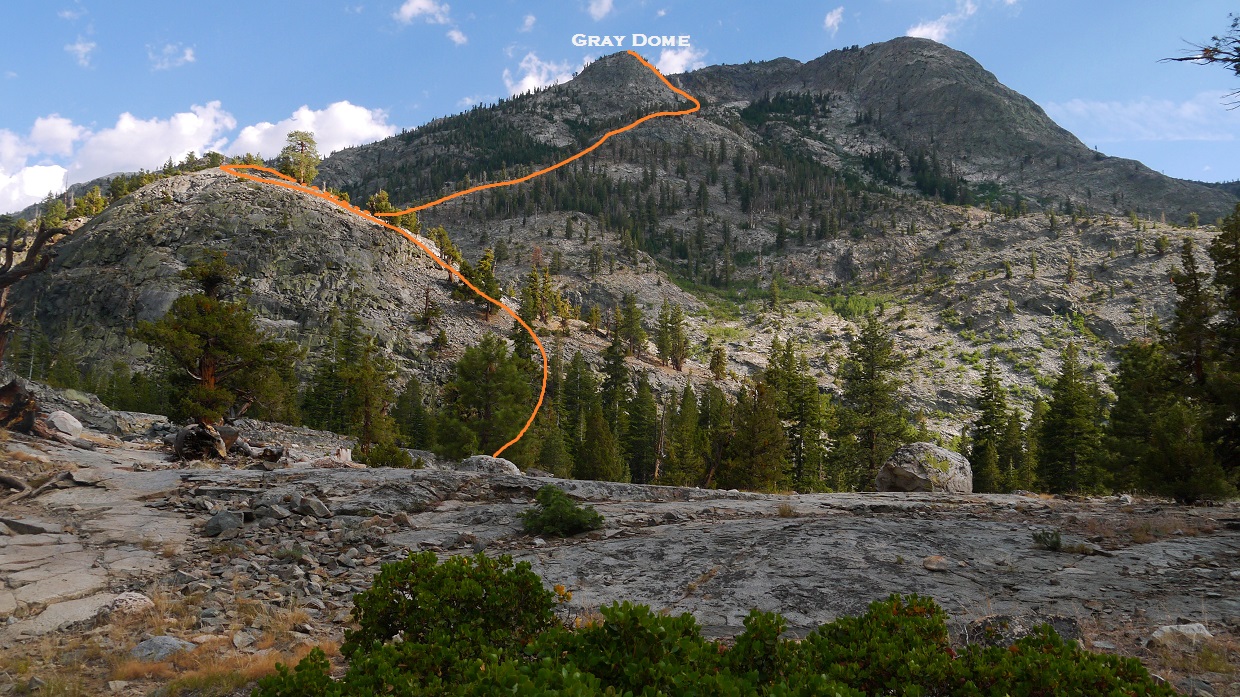 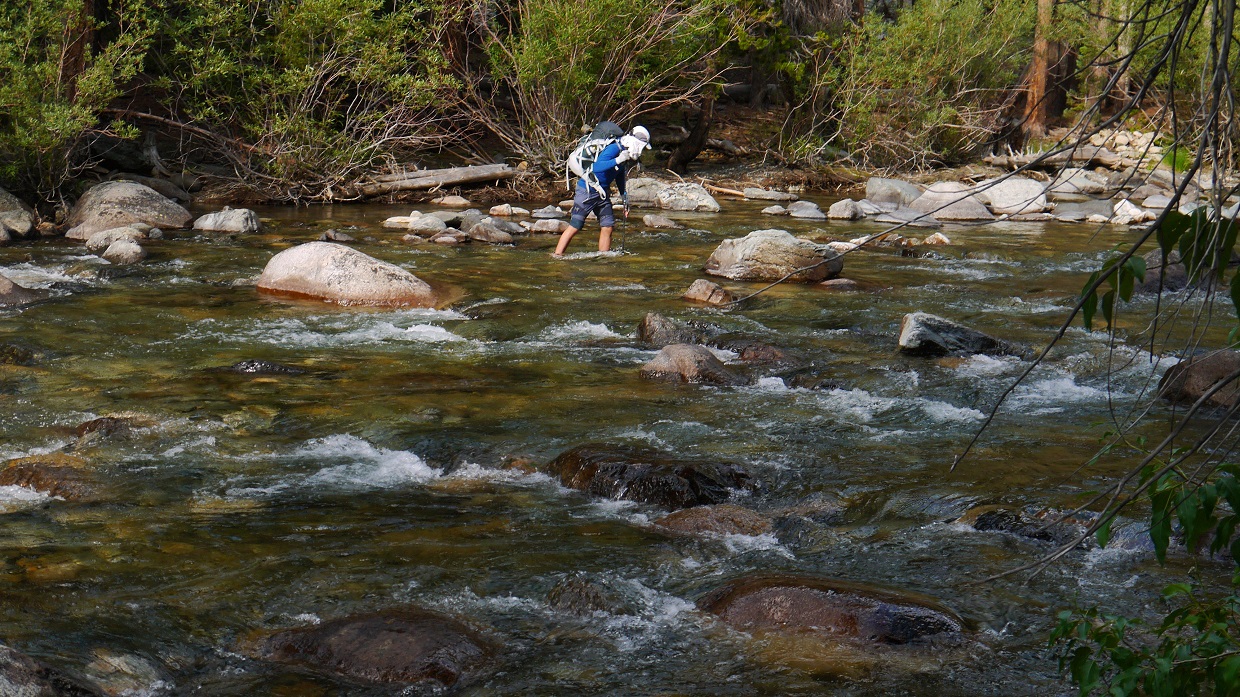 looking south from the spur ridge 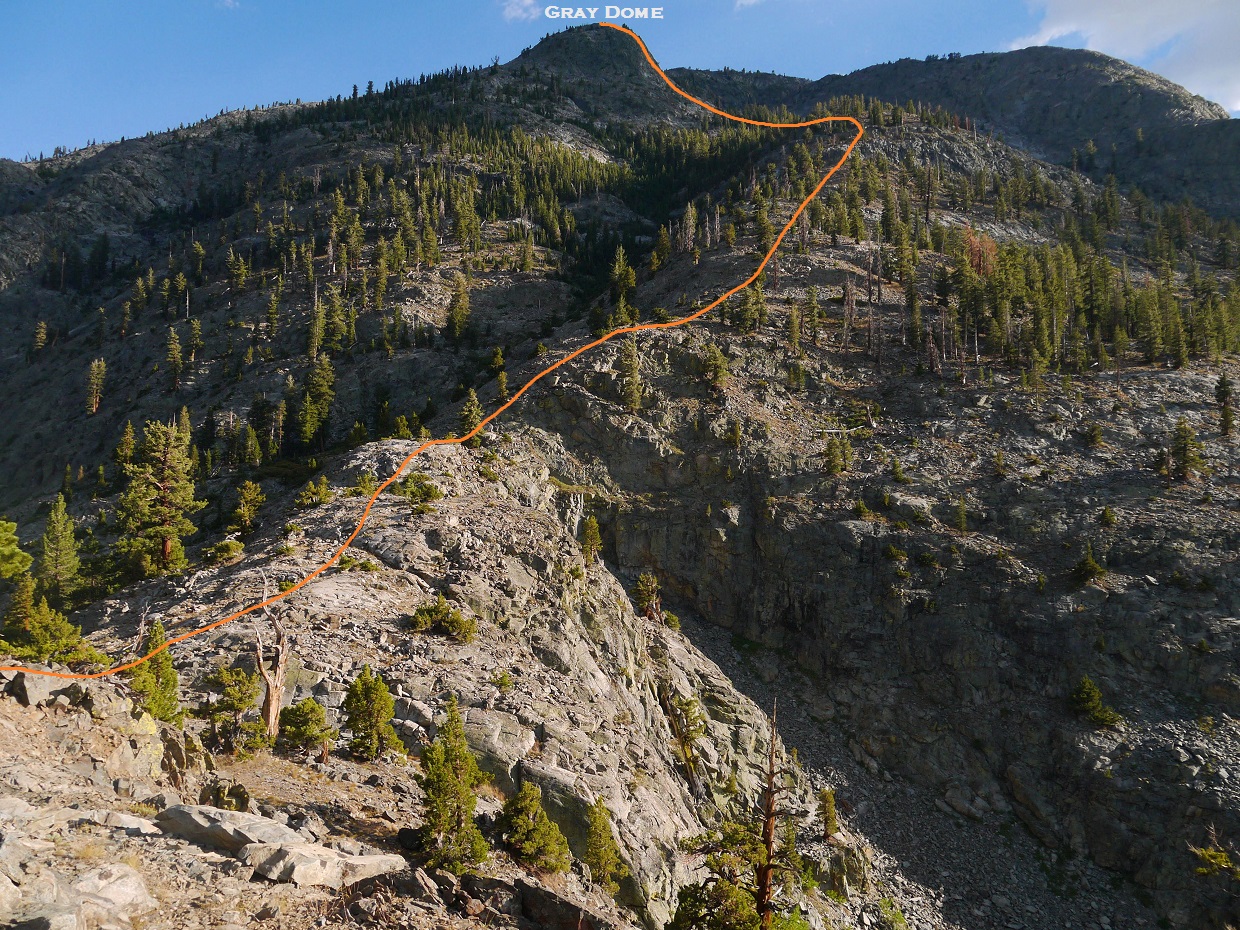 The views opened up dramatically as we ascended, especially of the deep gorge of Goddard Canyon to the east. 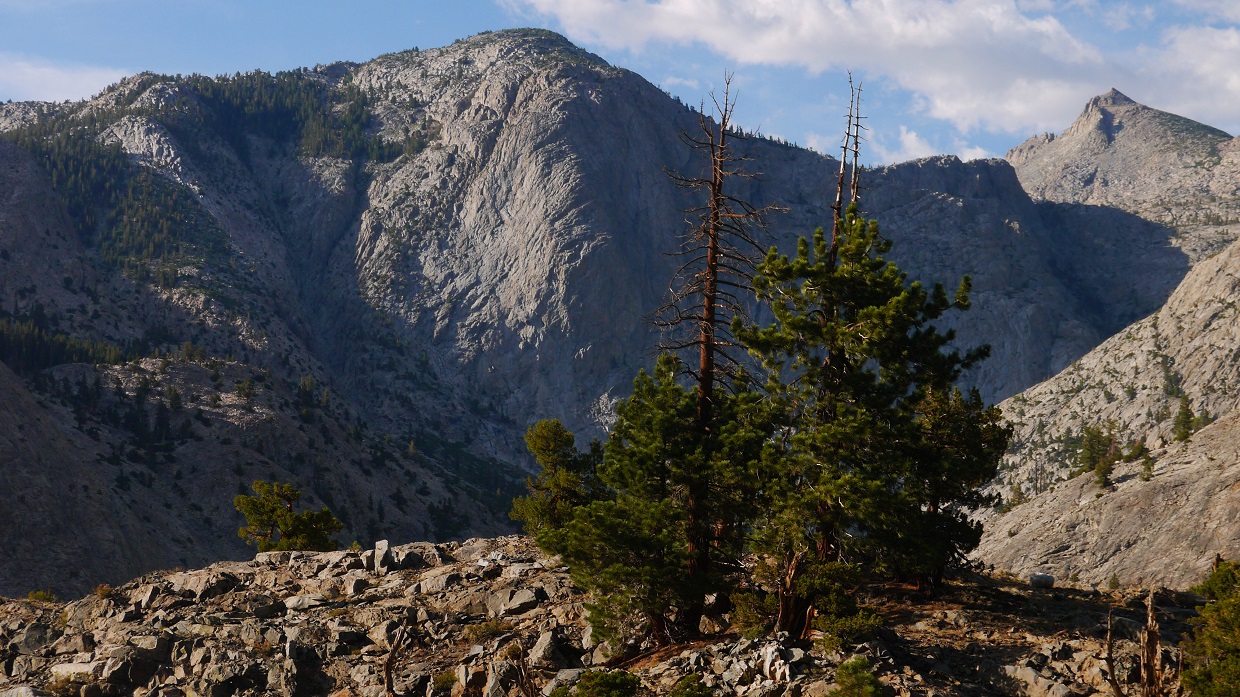 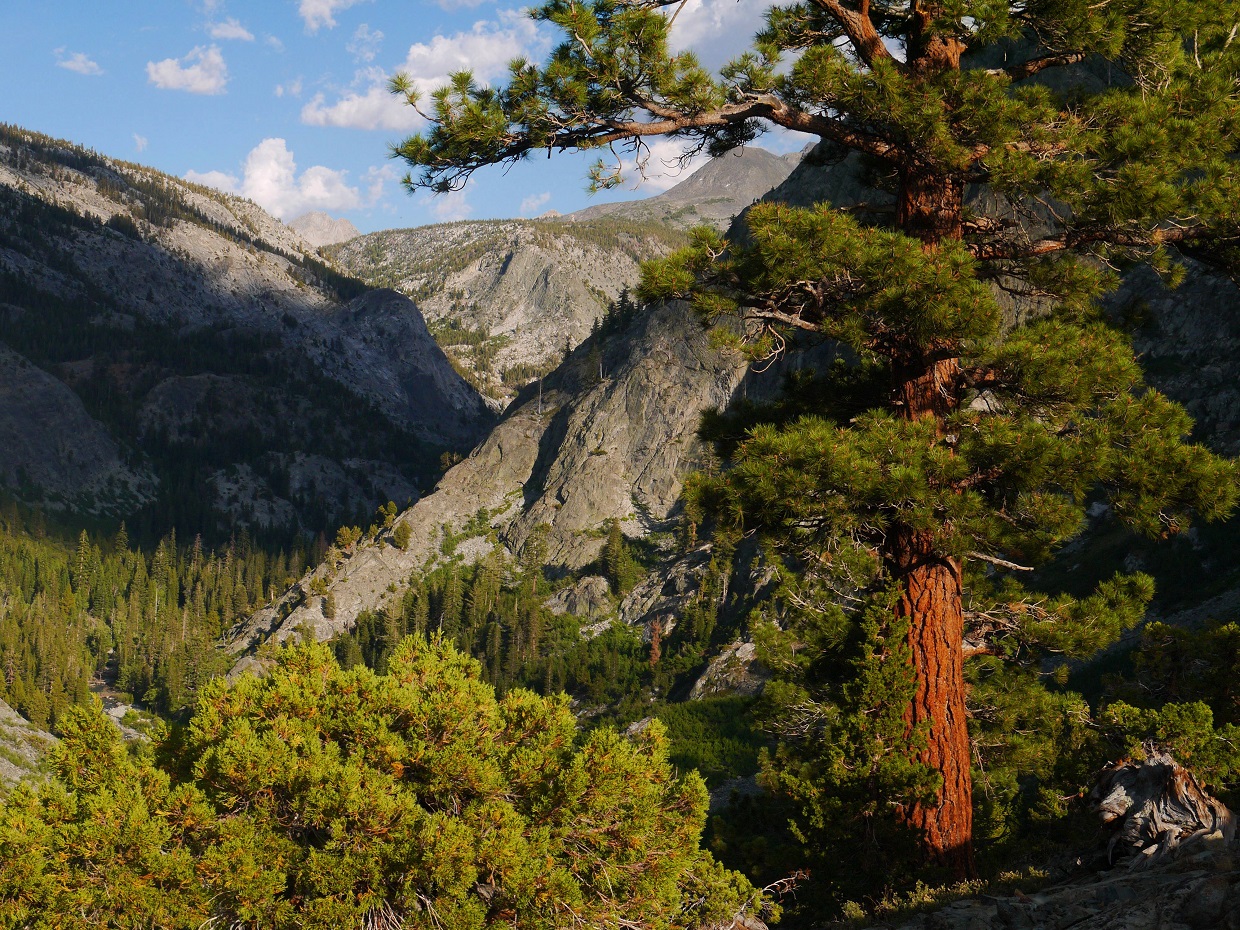 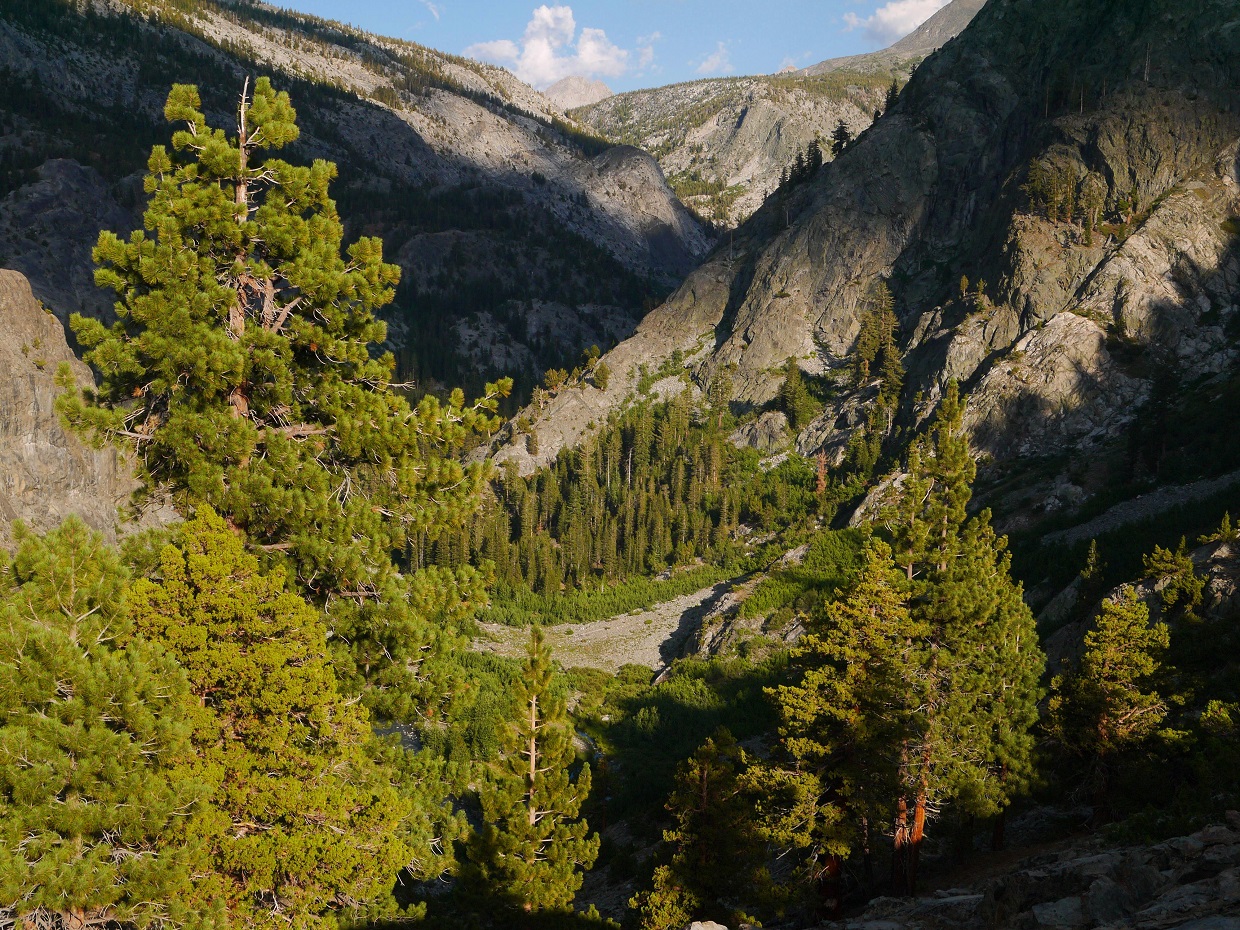 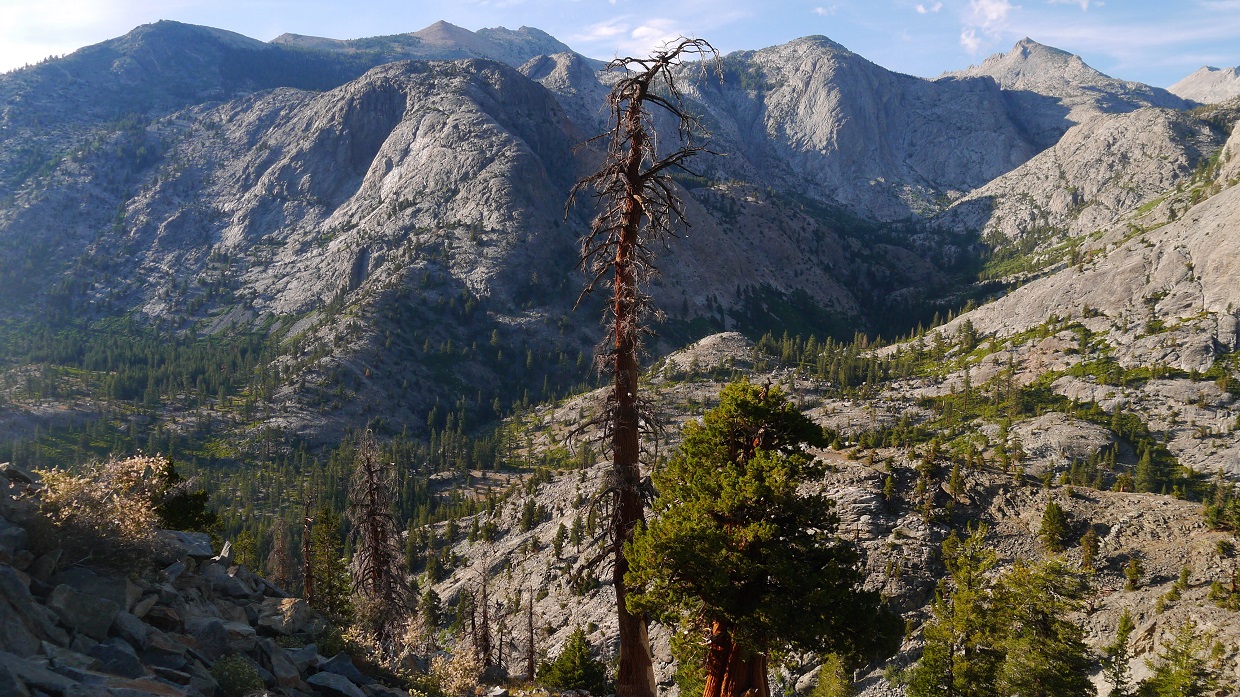 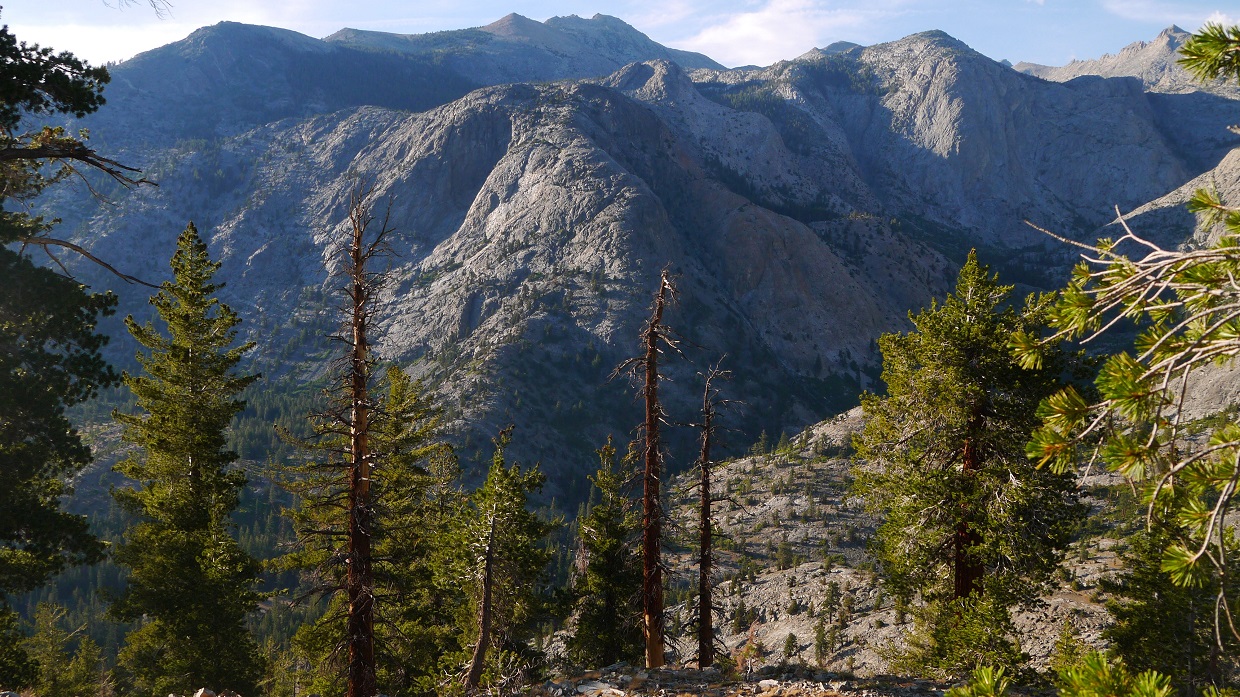 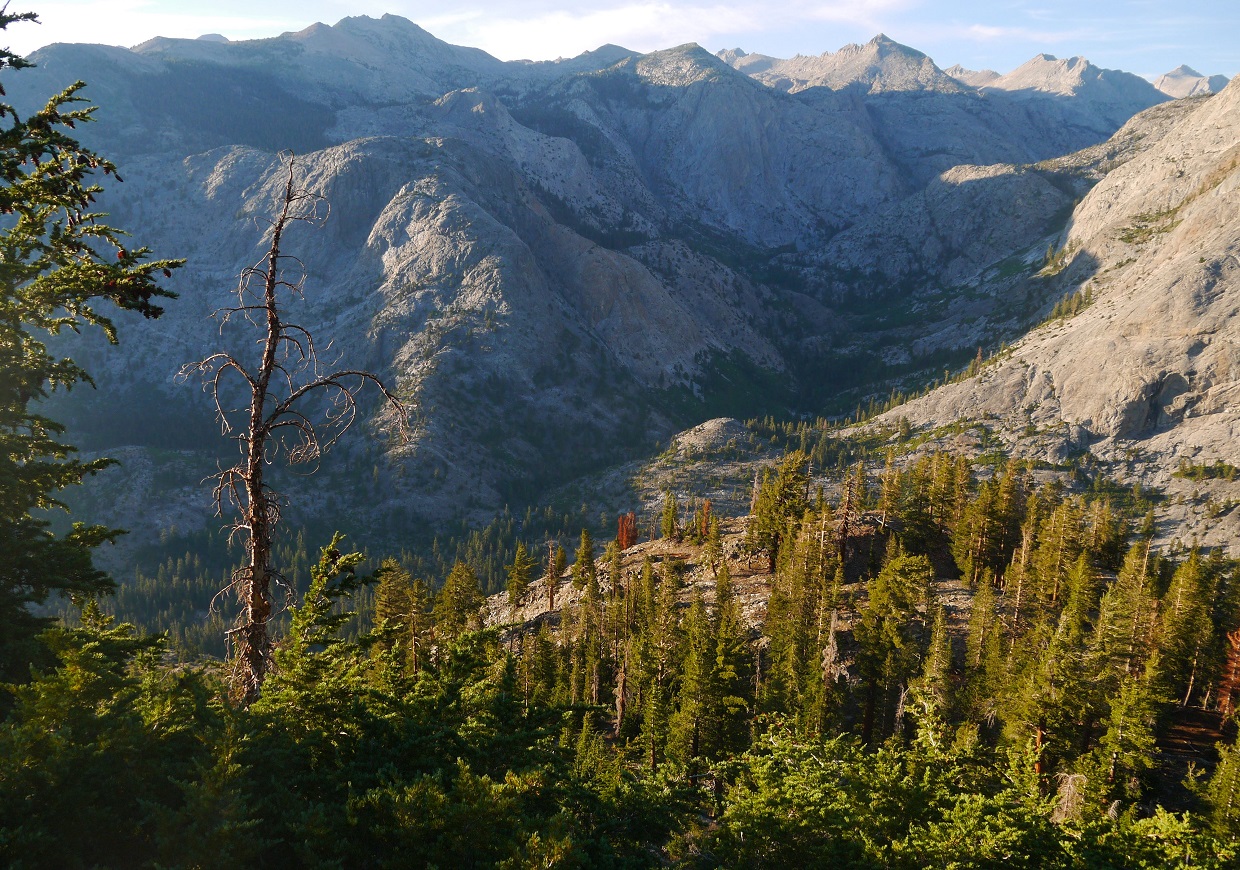 The NW face of Gray Dome contained a short section of class 3 climbing (with maybe a few moves of low class 4) on generally solid rock. 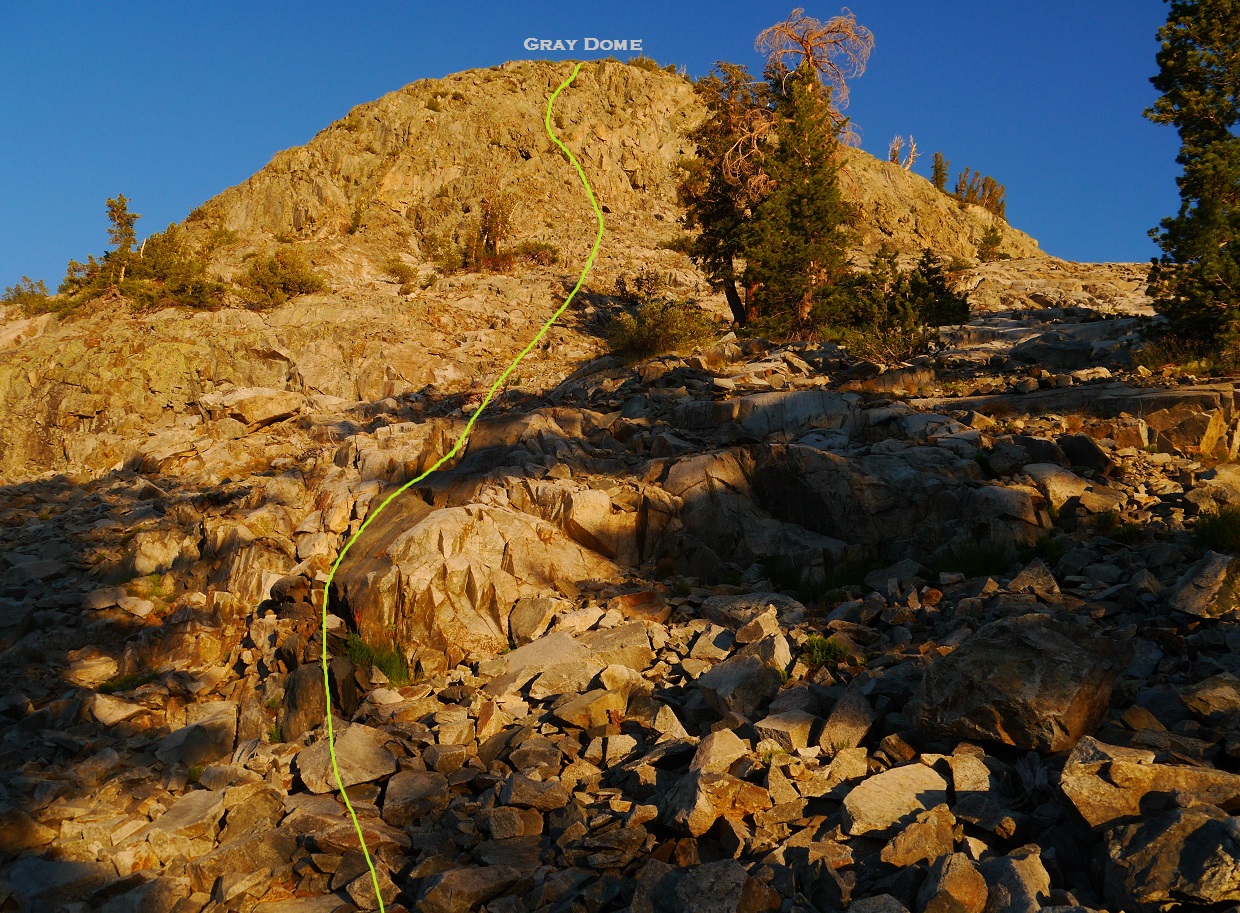 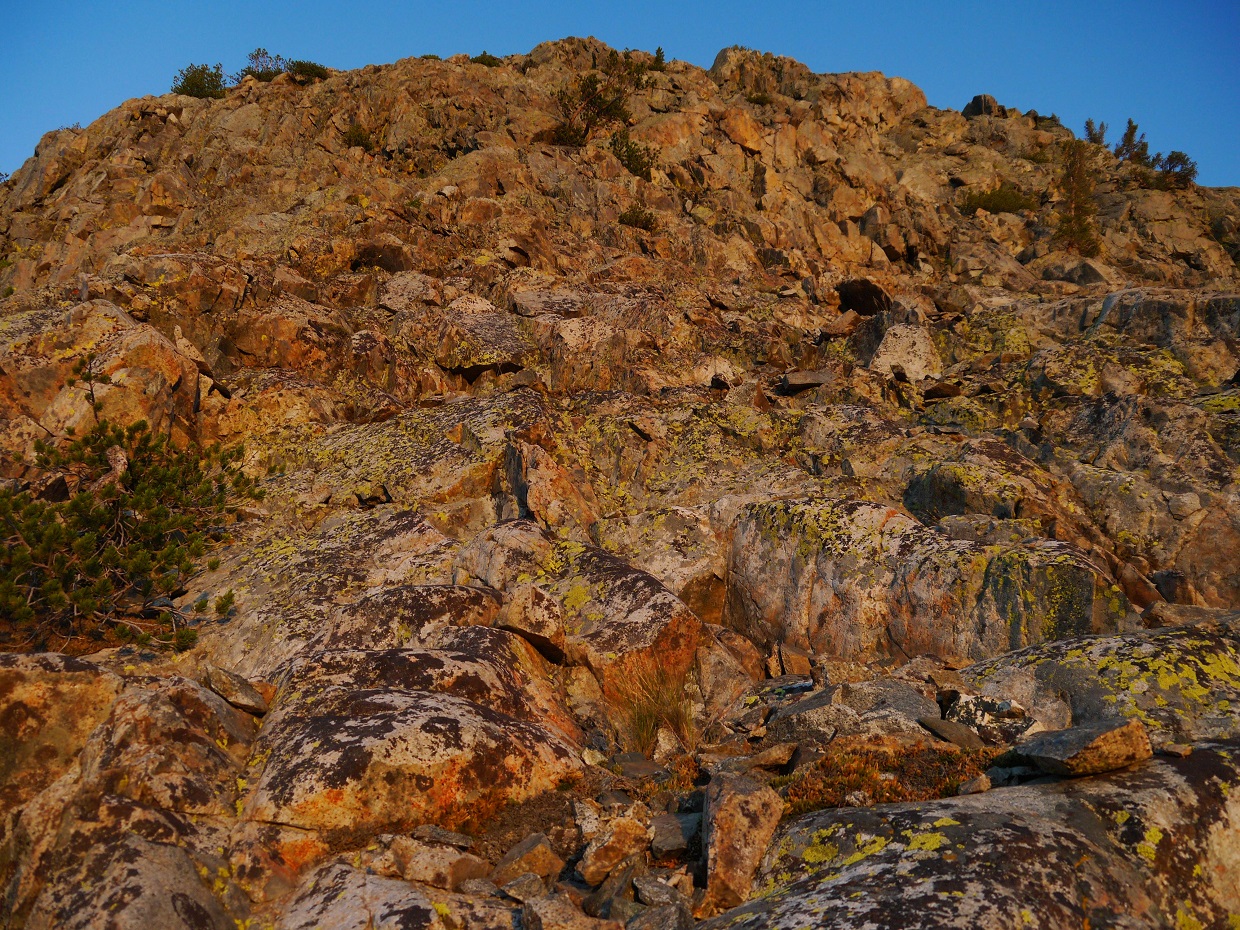 After reaching the top of Gray Dome, the ridge narrowed slightly and descended a short ways to a large flat area (10,560 ft) containing two tarns just north of a large lake (Lake 10,463 ft on topo map).

ascending the ridge above Gray Dome 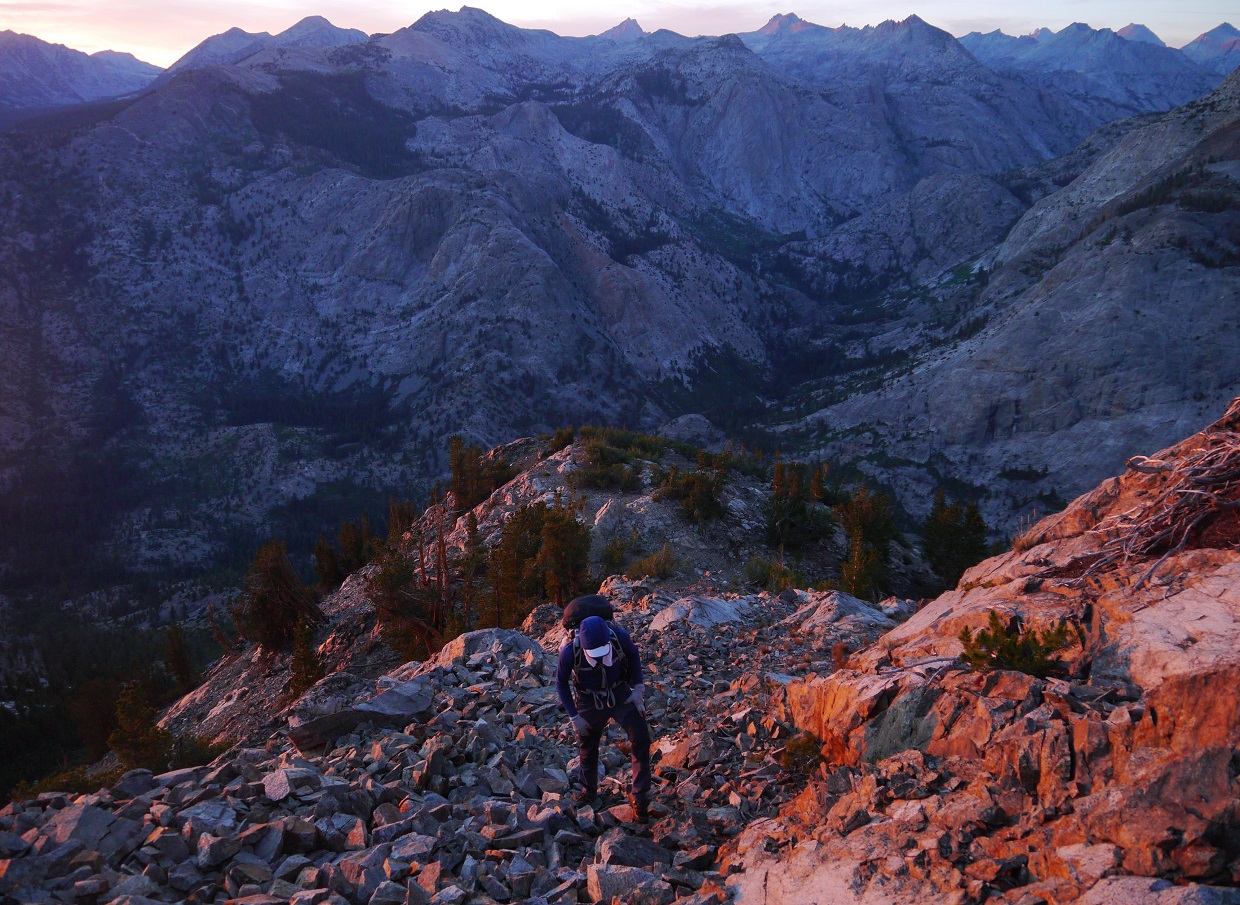 Seeing that this spot was as good as any, we decided to stop here for the night, camping on the eastern end of the southern tarn. There were plenty of spots to camp, so we set up fairly quickly, ate dinner, and went to sleep sometime around 9pm. I later dubbed this great camping area "Henry Flats."