back to home page
day 7

August 10, 2017
Since this was the last day and we only had two more peaks to climb before dropping off the traverse, we got a leisurely start 40 minutes after sunrise. Despite eating lots the night before, I felt somewhat lethargic, likely due to dehydration. 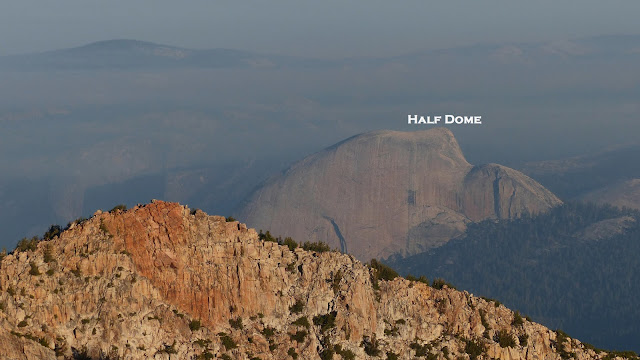 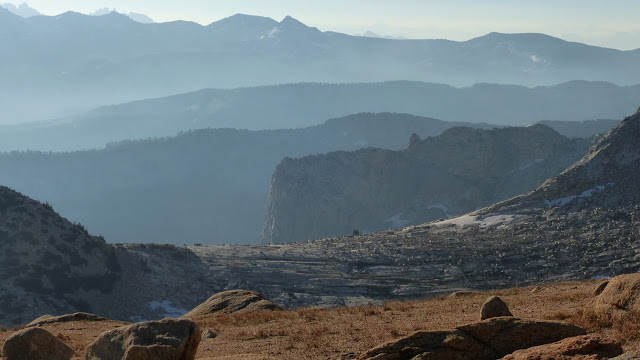 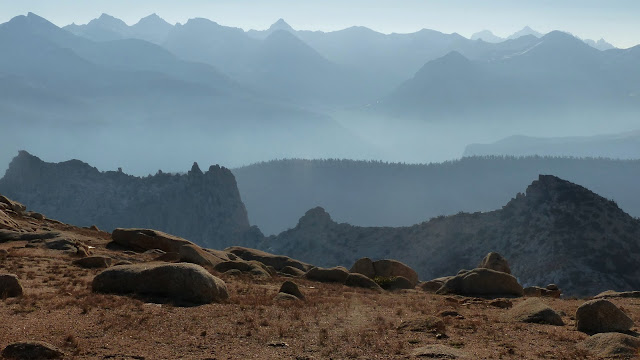 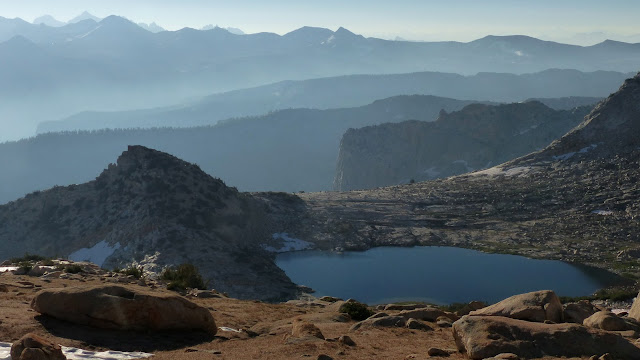 Tunnel Rock Peak involved a short and tedious boulder hop up its south ridge. We were able to surmount its summit block using a lumpy arete on its south side. Toshi was small enough to squeeze through a tight bouldery tunnel which avoided some of the tediousness above. 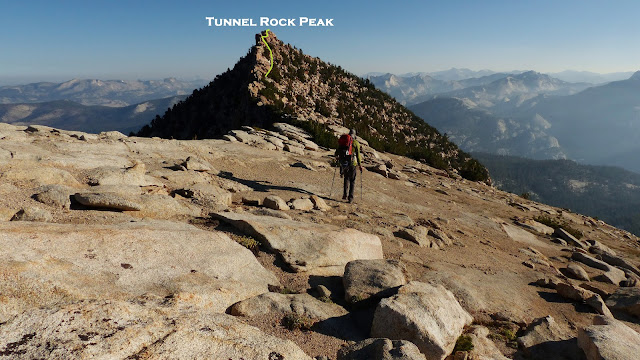 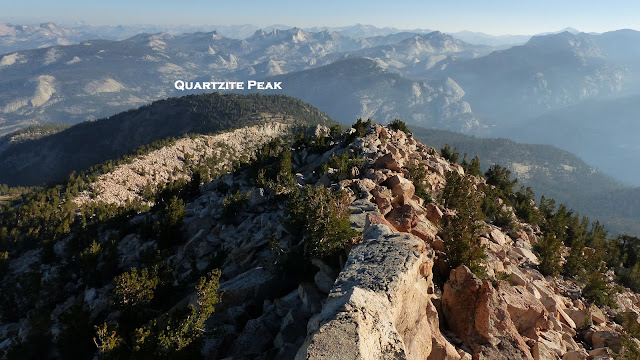 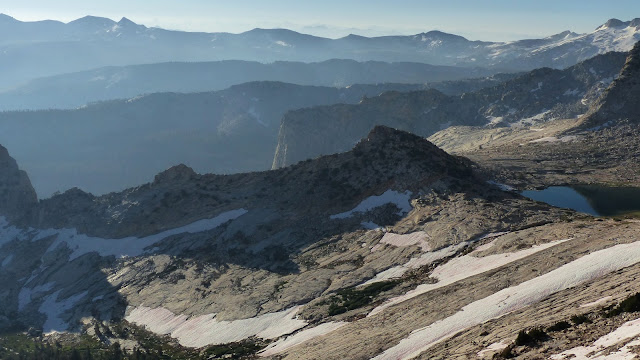 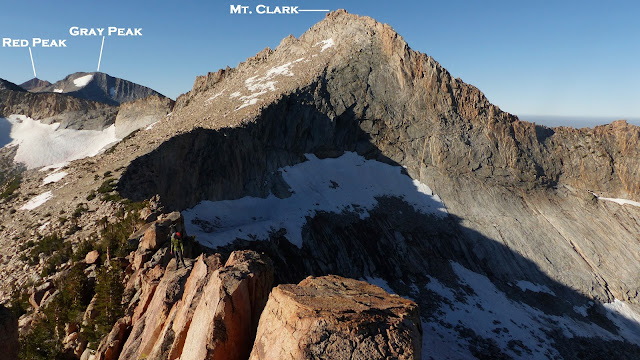 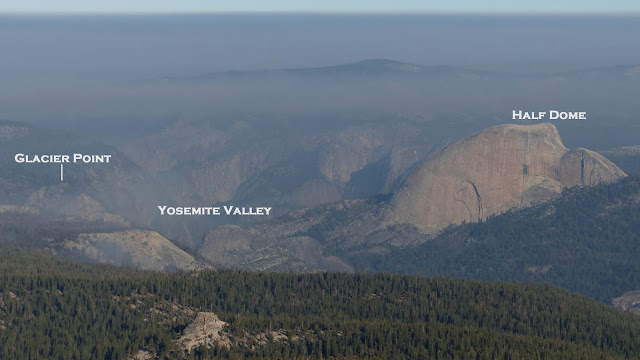 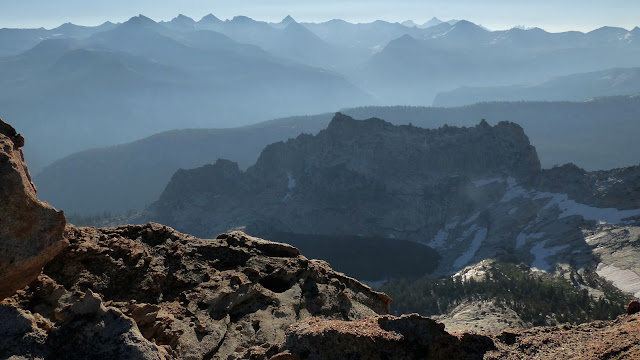 Tunnel Rock Peak's north ridge started out tediously bouldery, but soon improved as we crossed over a few feet to the west where the boulders vanished fairly quickly and were replaced with fast heal-punching sand. Within what felt like a short time, we were standing in front of the last peak: Quartzite Peak. This insignificant bump was somehow officially named by the USGS, possibly for geological purposes. 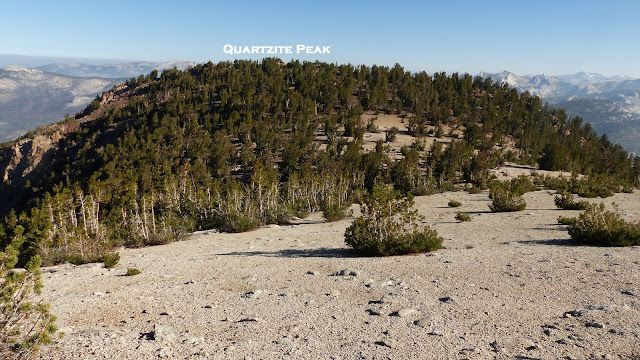 We located a register on the summit of Quartzite and set about taking a longer break as we planned our descent, a 3,500 ft drop into the Merced Lake Drainage just east of Little Yosemite Valley. At just under 7,000 ft of elevation, we expected it to be hot and smoky down there, so we wanted to enjoy the cool crisp air for a little longer while it lasted. 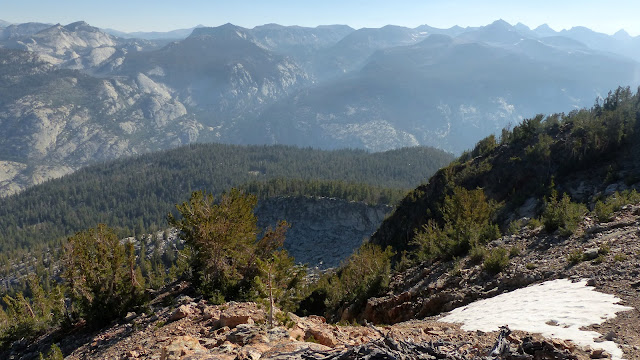 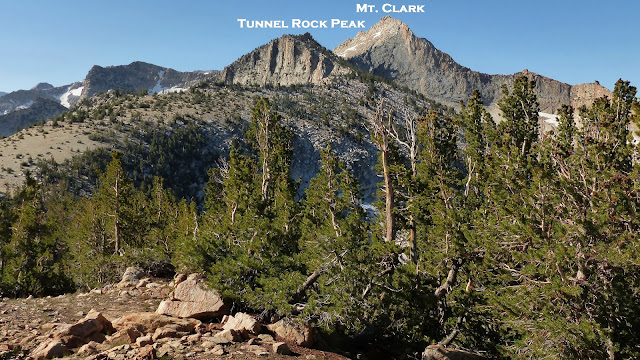 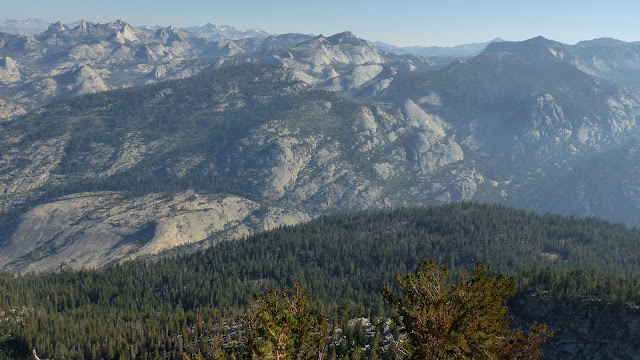 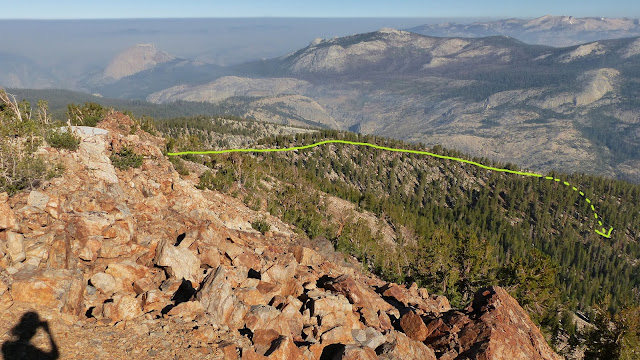 There were two descent options from Quartzite Peak: the northeast or northwest ridges. We decided on the northwest ridge because we would be guaranteed a footbridge across the Merced River. Initially I pictured much of this ridge involving nasty bushwhacking through manzanita, but it actually turned out to be pleasant, mostly just straightforward descending on open slopes of pine. Even though the ground was covered in slippery pine needles in places, it was much more preferable to bushwhacking. A little bit of bushwhacking was necessary after we crossed Clark Canyon and veered west across a mix of slabs and manzanita, but it still wasn't bad. After just over 2 hours of nonstop descent, we arrived at the trail, almost startling a few backpackers as we came in crashing through brush. 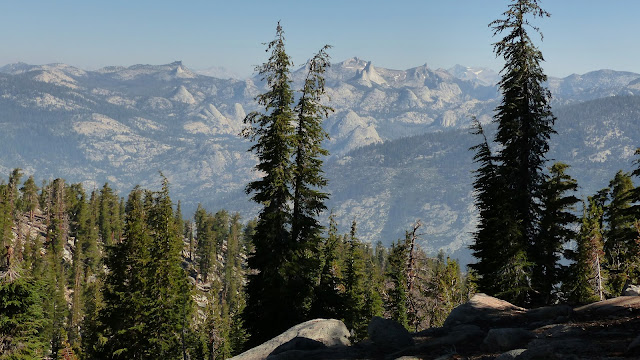 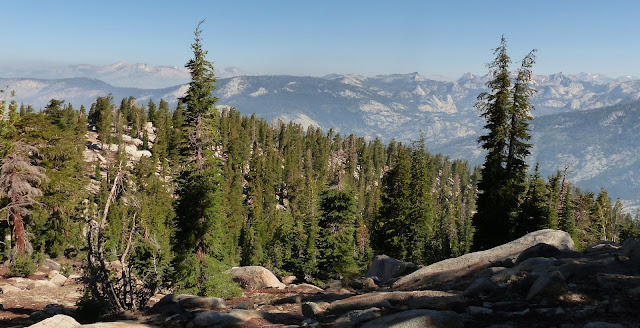 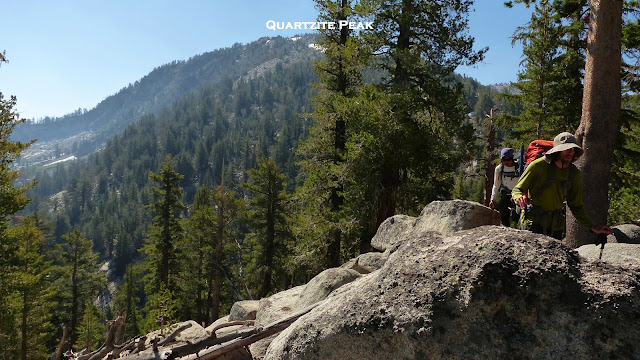 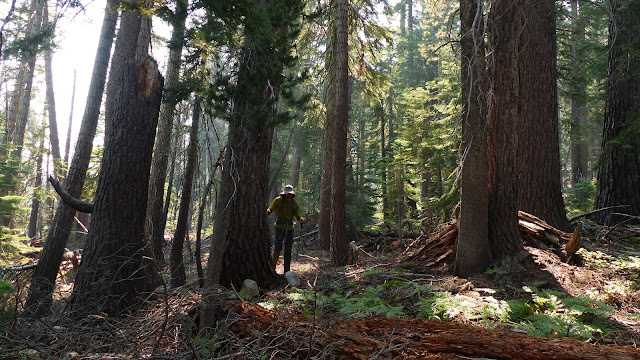 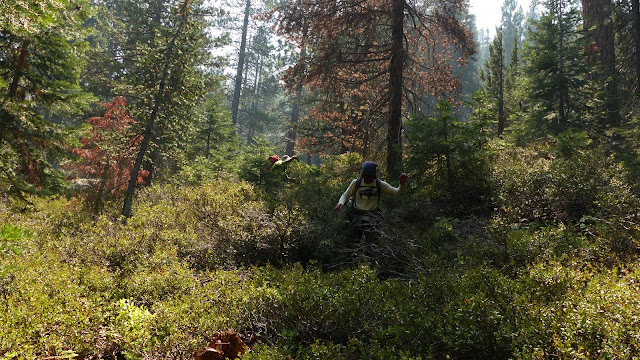 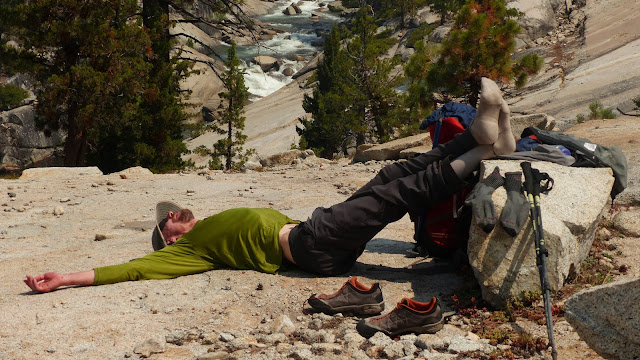 It felt great to finally finish this massive mega-traverse. All we had left now was a 19 mile 3,790 ft gain march back up and over Tuolumne Pass on luxury trails. After 8 days of traversing, we were tired enough that it felt like much more. We coasted through the first few miles of flat trails at what felt like lightning speed (compared to traverse speed), eventually slowing down after taking another trail out of the Merced Drainage which headed up north through the Fletcher Creek Drainage towards Tuolumne Pass. 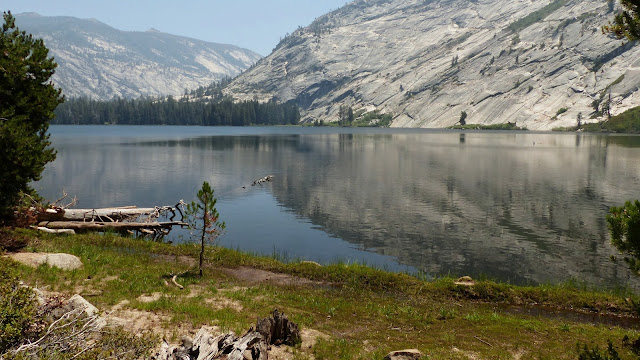 It really began hitting us how tired we were as we marched slowly up, up, and up. Even all the backpackers who we ran into looked neat and clean as opposed to our tattered clothes and beat up dirt and sweat smothered bodies. You know that you've really been out there when even multi-day backpackers can smell you from afar. On and on we trudged, taking breaks every few miles at various creeks to force down disgusting energy bars. We took a longer break at a large calm creek right by Emeric Lake, taking time to dip our feet in the water and lay down. Everything around us was so stunningly green and scenic. A little higher near Tuolumne Pass, swarms of mosquitoes could be found around marshes and ample stagnant water. 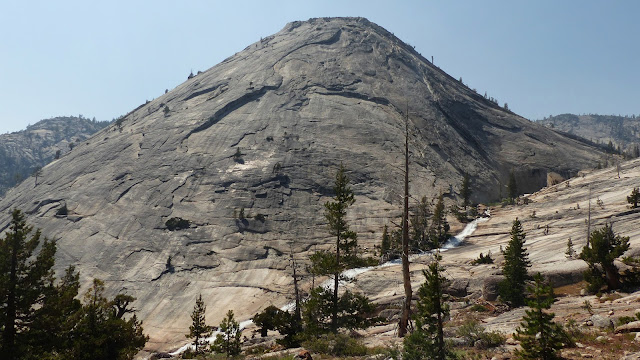 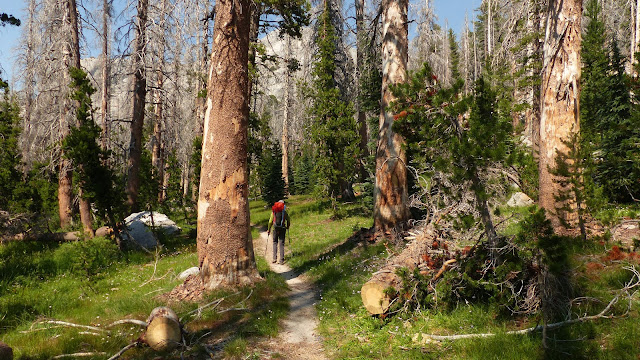 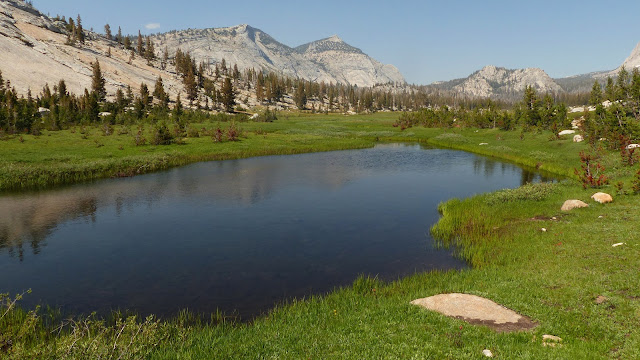 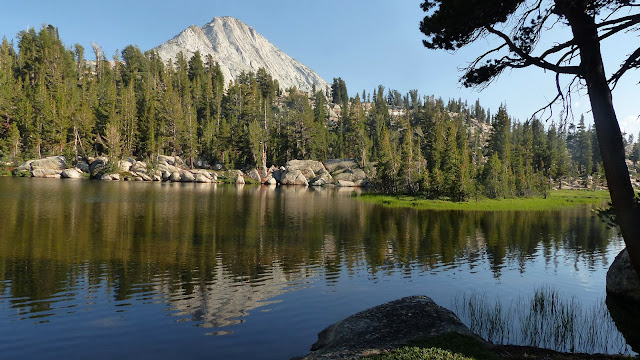 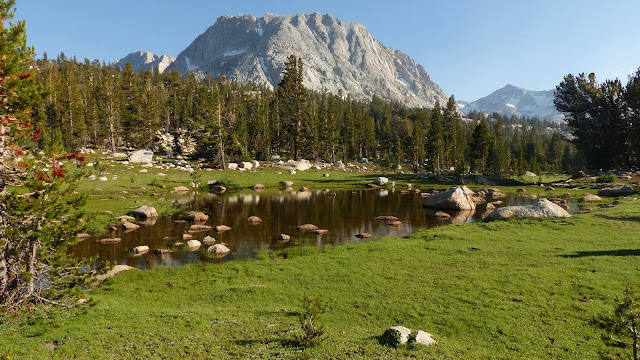 We breathed sighs of happiness upon reaching Tuolumne Pass, now back to where we were 8 days ago. From here it would be all downhill for a few miles back to the trailhead. We stopped once to force down the last bit of foul tasting energy bars we had, but otherwise kept moving. At first the scenery was enough to take my mind off my aching body, but it soon became a droning march as we re-entered the forest and everything looked the same. 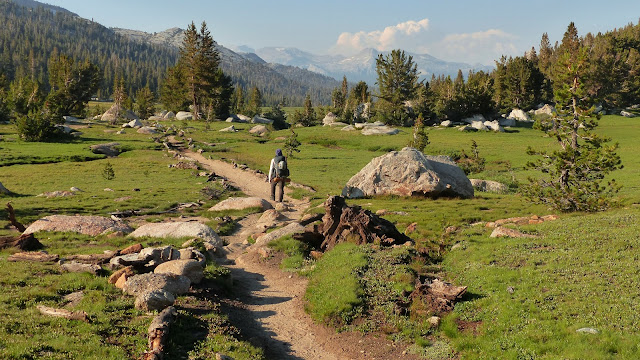 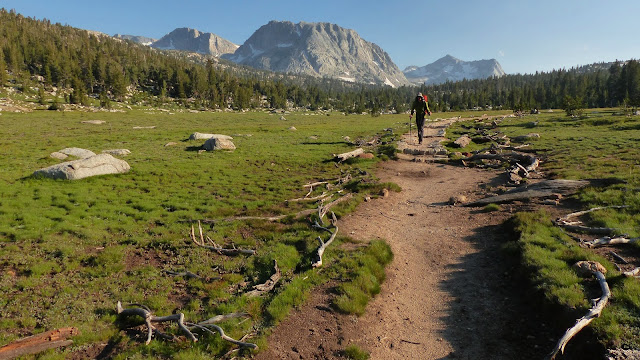 15 minutes after sunset found us stumbling back into the trailhead parking lot which was mostly full of cars but no people. After spending 15 minutes rearranging items and changing, Toshi and Sean drove off west to where Sean's family was camping at Tuolumne Meadows Campground. Toshi would drive back to Morgan Hill that night since he still had to work the next day, mostly subsisting on coffee on his way back. I headed east in an attempt to drive down to Independence where the Sierra Challenge was taking place, but was only able to keep it up for 40 minutes before feeling way too sleepy and pulling over in the surprisingly empty Convict Lake Trailhead to pass out.

back to Convoluted Bliss