March 28, 2017
The Merriam Mountains are a tiny range located just north of Escondido in San Diego County. It is a fairly beaten up ecological island nestled between endless miles of ever expanding development. The most intriguing thing about the range highpoint was its smooth 20 ft milk bottle shaped summit block which contained no holds and no opportunity for natural protection. A simple meat anchor belay was also out of the question since the block's circumference consistently grew narrower towards its top, which was barely large enough to seat the average person. Others had suggested that this true highpoint had yet to see a first ascent, but with the urban nature of it's surroundings and the myriad of dirt roads leading up to the summit block, my thought was it was very likely that someone had previously devised a technique to surmount it. Regardless of the first ascent or not, it was an interesting feature to tackle. 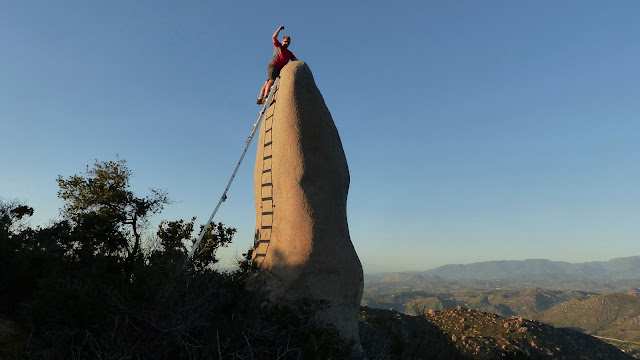 Craig and I decided to tackle this peak on a whim after it came up in a discussion about another peak which we were originally going to climb on the same day. Armed with a description of the summit block and a 20 ft extension ladder which we were to carry up the mountain, we set out for one of our more interesting local peaks. (see map)

Trailhead: Start from the junction of North Twin Oaks Valley Rd and Camino Mayor (33.2157, -117.1717). It is recommended that you park away from this junction and walk/jog up to it, since there is very little room for parking here and your car could get towed. 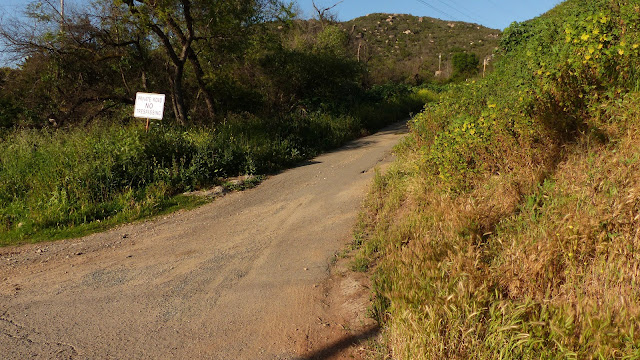 After walking up Camino Mayor (960 ft) for about 200 ft, the road quickly turned into rough dirt. It was clear that this road had not been used by vehicles in years due to its severely washed out nature. We continued up to the first saddle at 1,500 ft before veering right onto a smaller dirt road which brought us up to the summit shortly after. Even though the hike was just under a mile, it took 45 minutes due to having to carry the bulky ladder.

Once at the summit block, we extended the ladder to its max length and spent 5 minutes leaning it up against the southwest side of the block, only dealing with minor difficulties as the ladder became slightly snagged at first in surrounding chaparral. The top of the ladder reached about a foot below the highest point. I clambered up it, finding everything quite sturdy (or at least it felt that way). 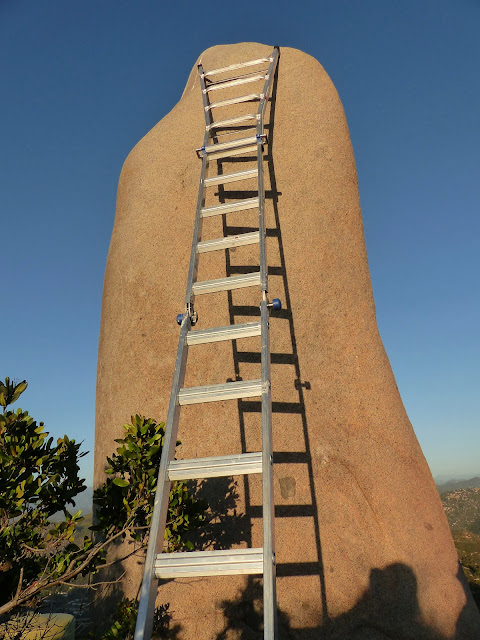 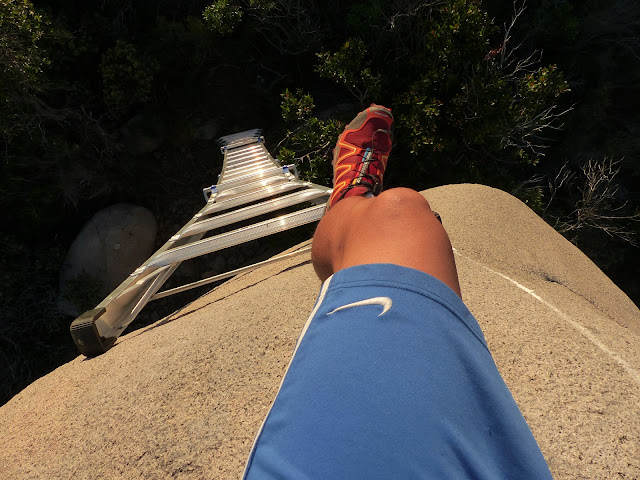 Craig then climbed up, a little hesitant at first to climb above the ladder, but then deciding that it was not too bad. 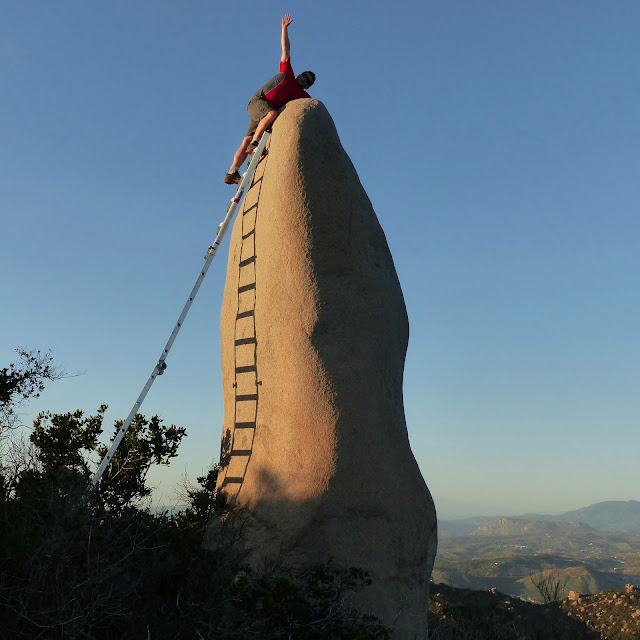 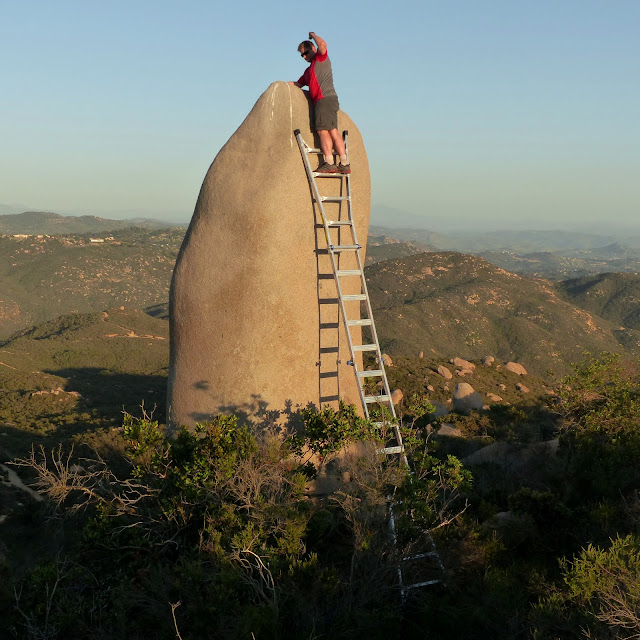 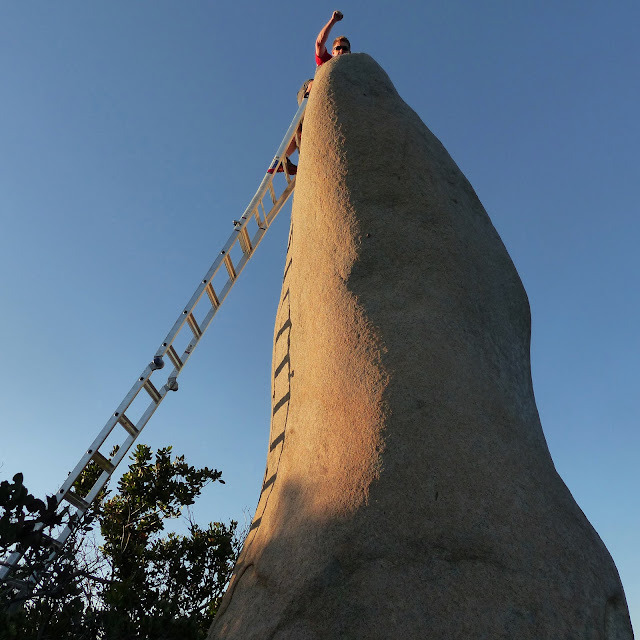 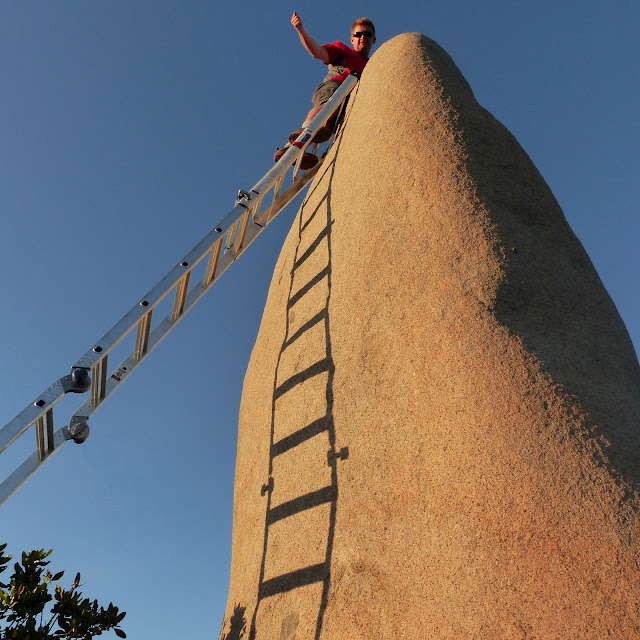 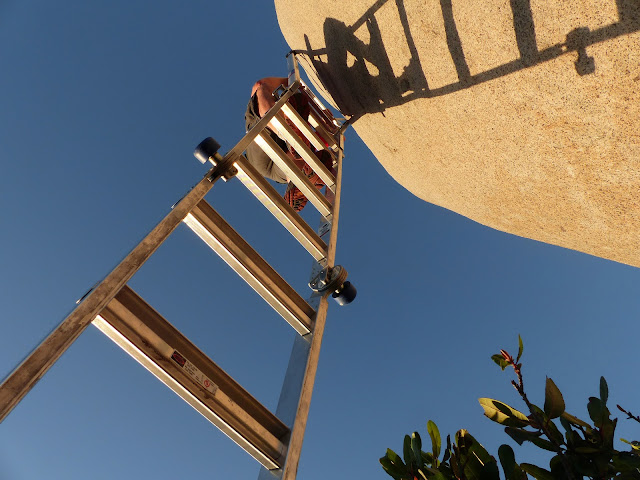 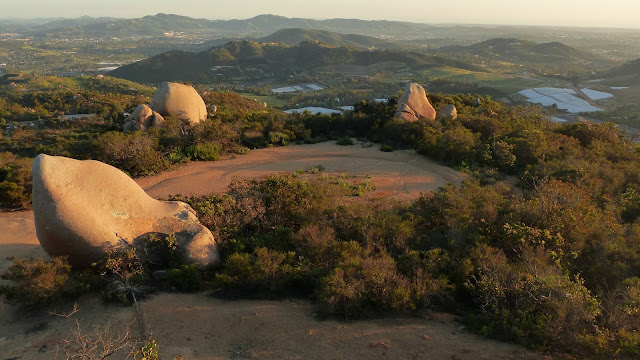 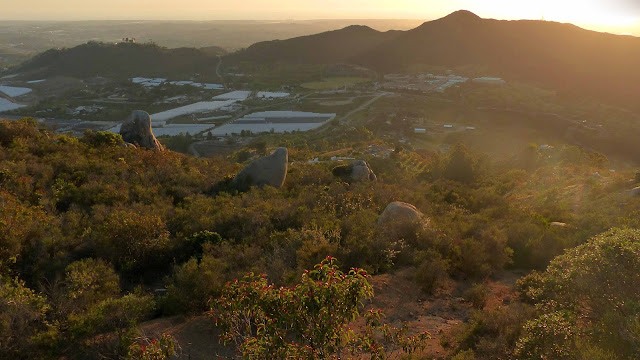 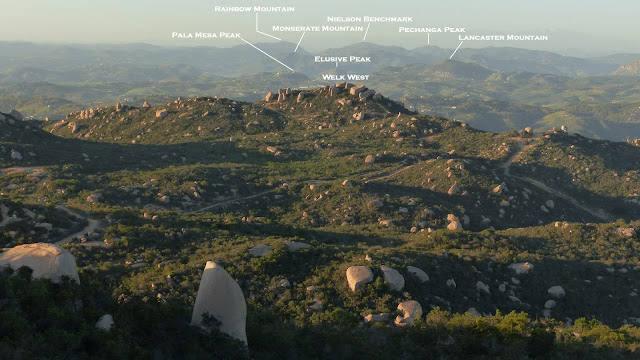 Since there was still a little time before sunset, we decided to hit Welk West, a small peaklet a short distance to the north. After folding the ladder back up and stashing it at the 1,500 ft saddle, we continued north on a network of dirt roads for 0.8 miles to the large pile of rocks which made up the summit. The highest point was a giant molar-shaped boulder with a rope attached to it by a very rusty carabiner. A very short friction move with this rope brought us to the top. 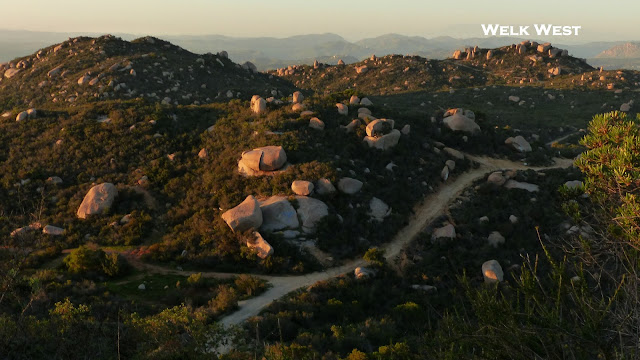 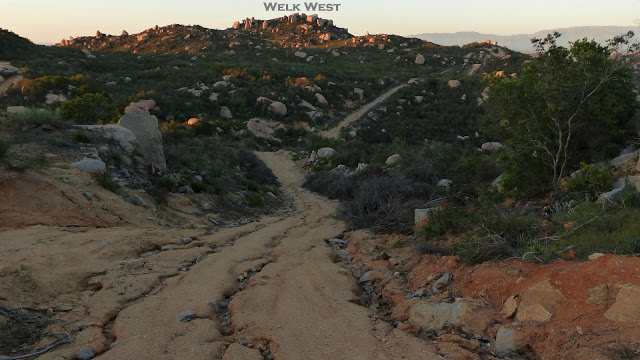 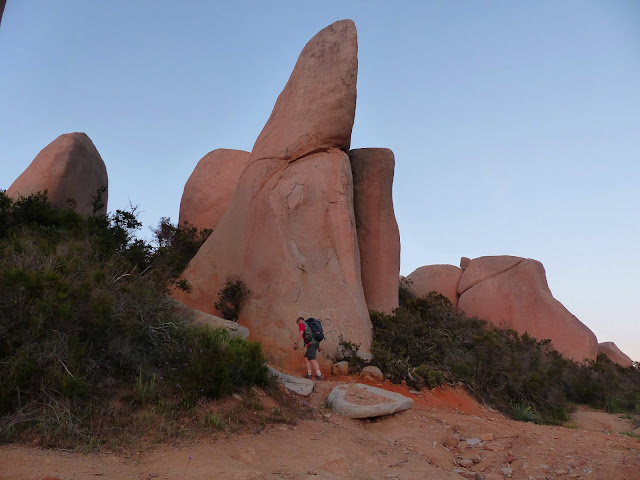 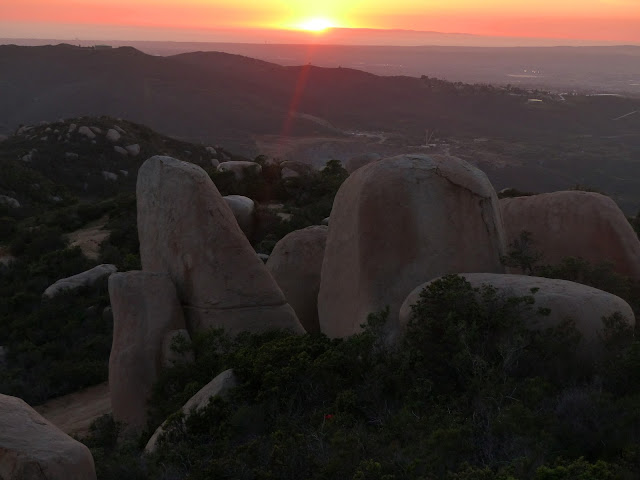 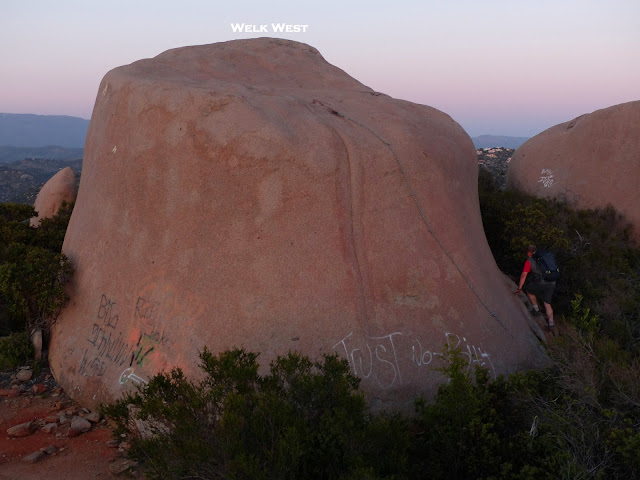 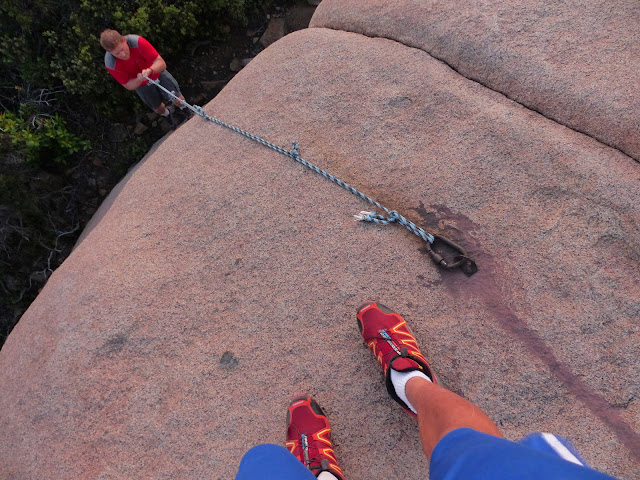 After summiting, we walked back to the saddle, picked up the ladder, and lugged it back down without a hitch. 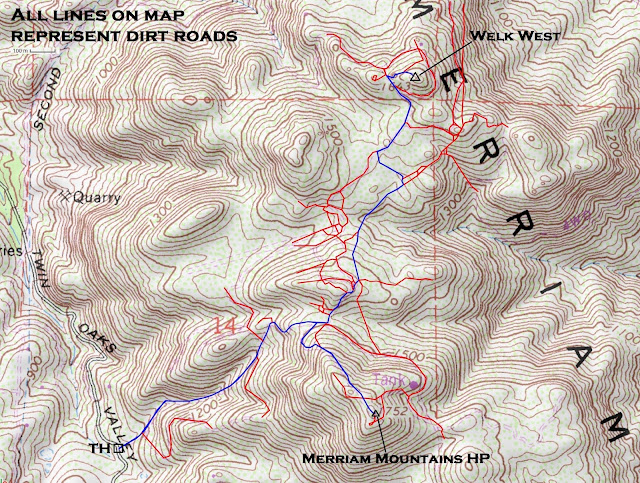 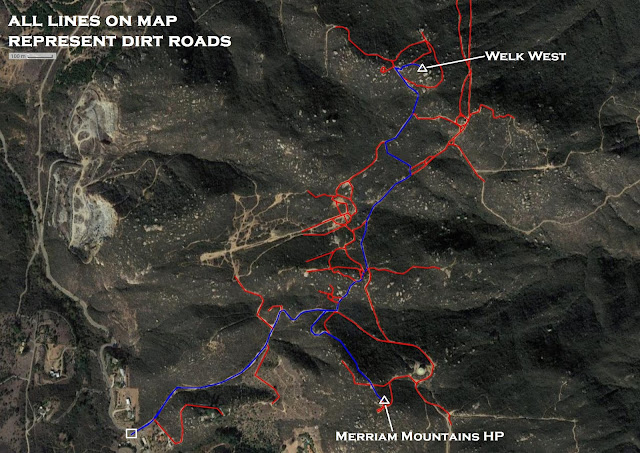