September 1, 2016
Just south of San Marcos in north San Diego County are a small cluster of urban hills under 2,000 ft of elevation, the highest of which is a P1K called Mt. Whitney. I had first noticed it while casually scanning local topos, also noting several other hills nearby. I decided to save these hills for a foggy morning in September, hoping to catch a sunrise above the fog.

Mt. Whitney and Frank's Peak are located on the east side of their hilly cluster. They seemed to be popular with local joggers who frequently used the area for workouts. I arrived at my starting point at around 5:40am as the eastern horizon was beginning to brighten up, parking at the last public access point before a gate on Washingtonia Dr, right across from the start of a long driveway to a distant luxury home. Next to the gate was a sign indicating "authorized personnel only." No one else I previously talked to had had any problems here, so I authorized myself and continued up. From there, it was a few minutes walk along a paved road to the summit of Whitney, which was crowned with a large transmission tower. I enjoyed some nice dawn scenery from the summit of Whitney, then headed off southwest for a short walk along connecting trails to the summit of Franks Peak where I watched the sunrise. I noticed Double Peak to the west just barely poking out of the fog. That was to be my next destination. 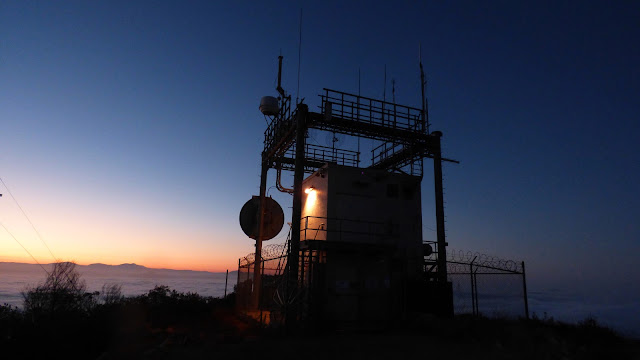 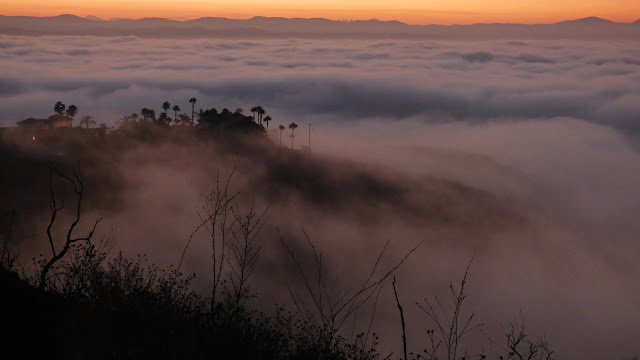 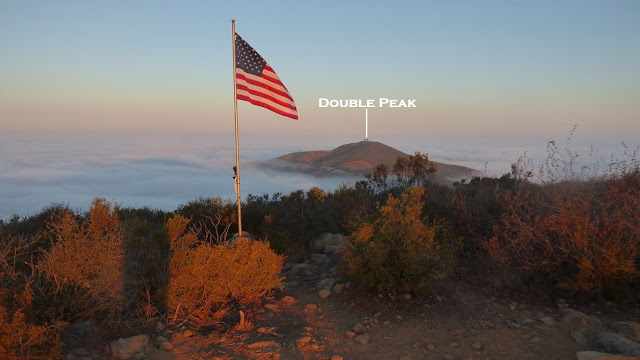 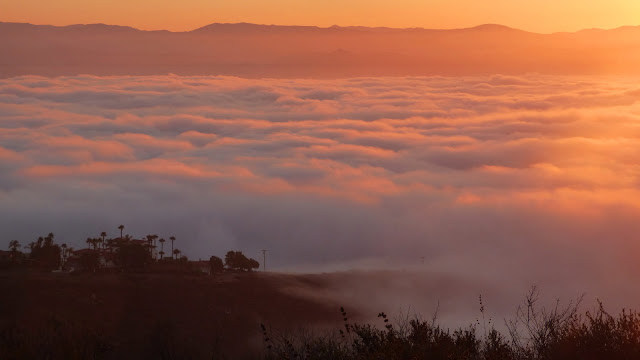 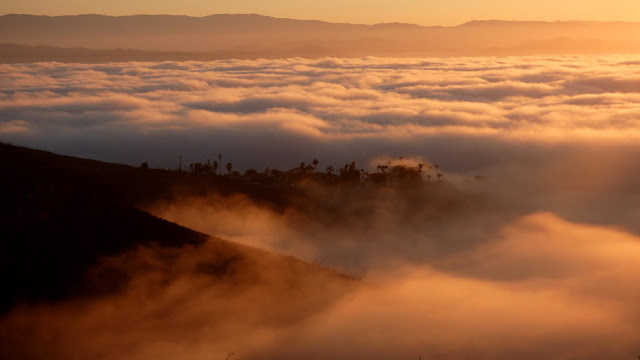 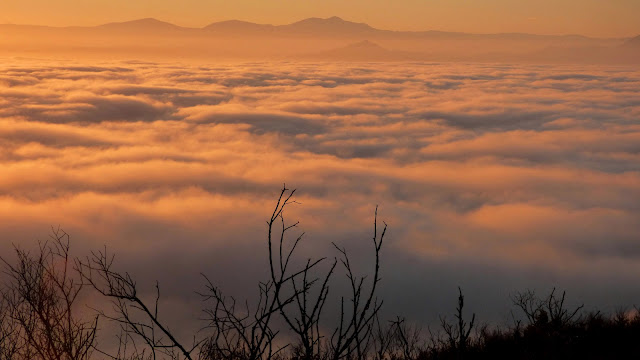 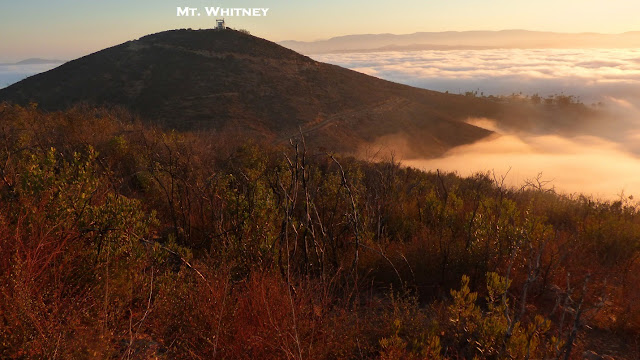 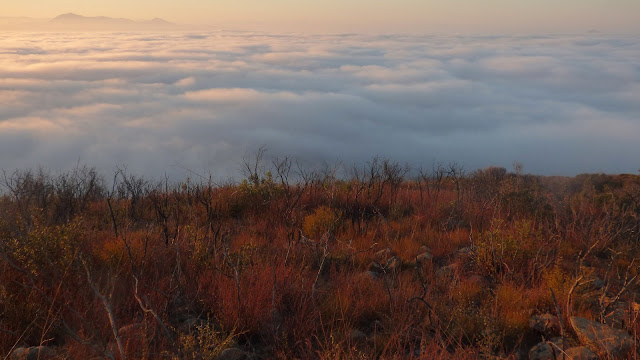 back at the start 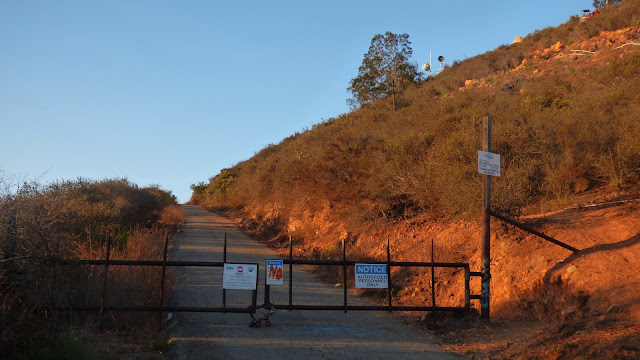 I got back to the car at 6:50am and drove over to Lakeview Park in San Marcos. Based on what some friends had told me, it was a popular local workout to hike up Double Peak from this park. 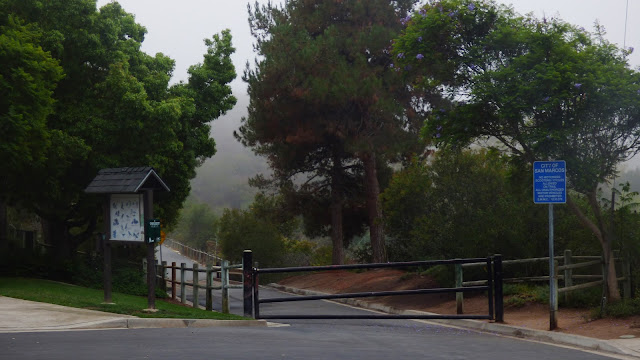 I started off by walking up a main road heading south out of the park, passing by the west side of the tiny Discovery Lake. This road (or fancy trail) continued south up a hillside, through a residential area, and up another hillside. 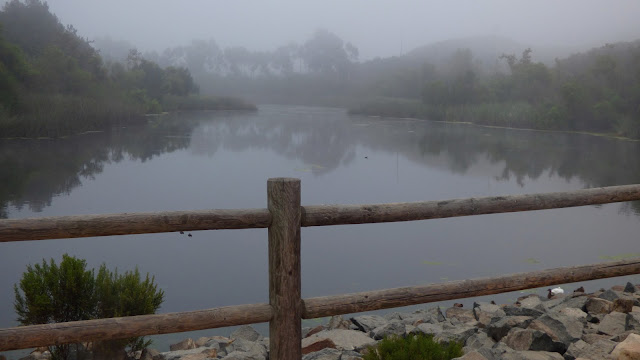 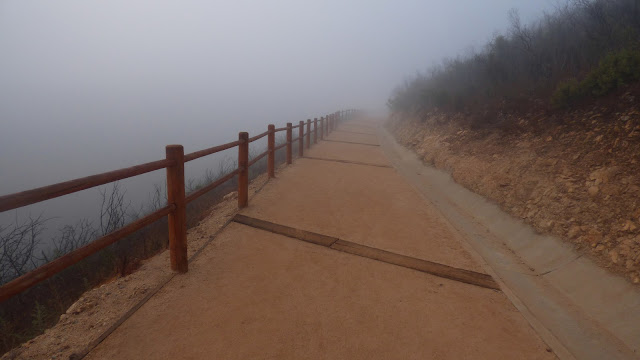 As the fancy trail reached a large junction above the residential area, I turned right, walked about a hundred feet, and located a use-trail heading south. This would lead to the summit of Double Peak, where I popped out of the fog right below its summit. Double Peak's summit was crowned with several picnic tables and a telescope. The most interesting thing (at least in my opinion) was a diagram indicating nearby landmarks, including Mt. Whitney, Franks Peak, and San Marcos Peak. 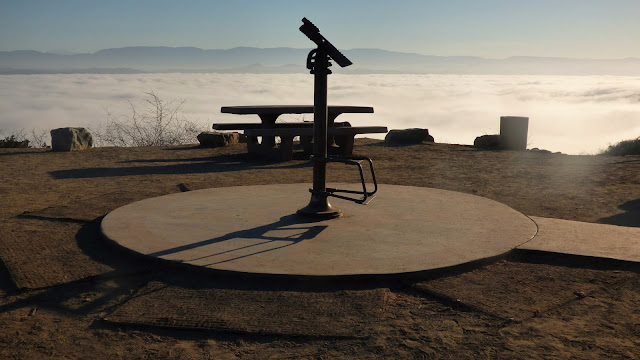 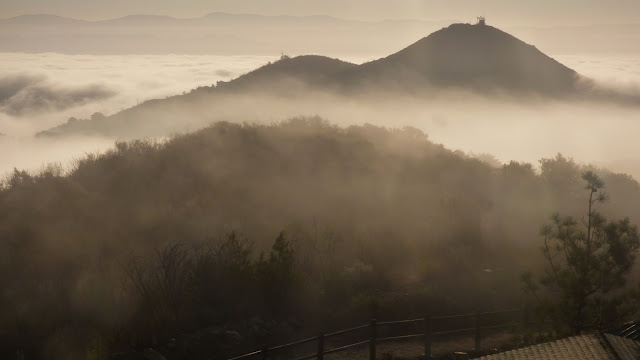 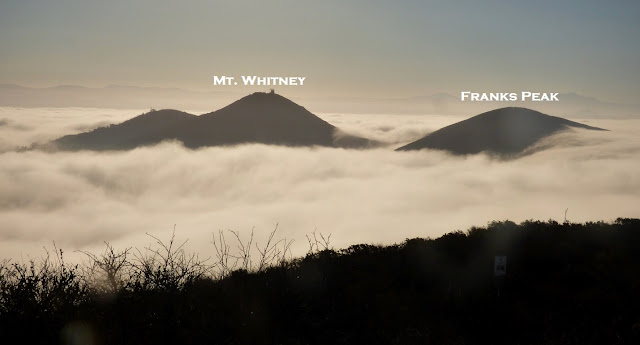 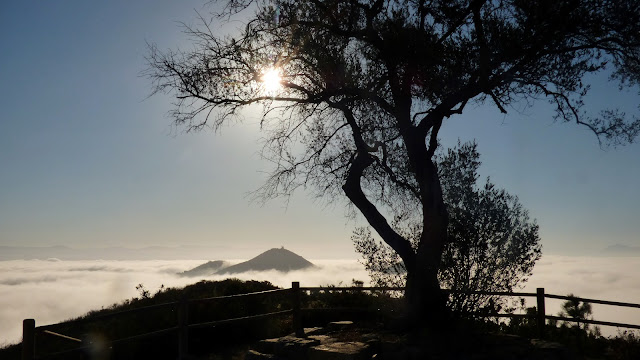 From Double Peak, I took the Ridgeline Trail west along the broad ridge connecting Double Peak to San Marcos Peak. The total distance between these two peaks was about 1.5 miles and consisted of the same type of well graded fancy trail that was found north of Double Peak. 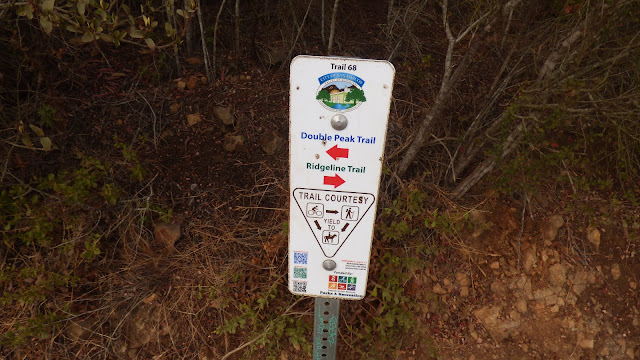 San Marcos Peak's highpoint was crowned with a series of radio towers. 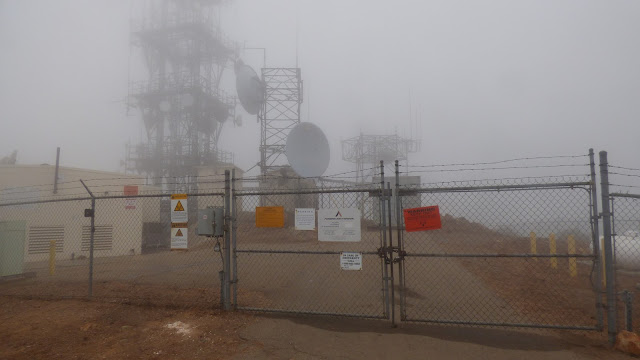 I hit the highpoint of Cerro de las Posas on the way back from San Marcos Peak, taking a side trail that branched off the Ridgeline Trail just west of Pearl Dr. I walked a few hundred feet on this side trail, turning west (right) upon noticing a fence ahead, walking about 100 ft to the highpoint which was pretty uninspiring.

I headed back along the Ridgeline Trail, eventually intersecting the trail I had used to ascend Double Peak, taking it down to Lakeview Park. Everywhere along the trail were locals out for their morning workouts- quite a nice way to spend a Thursday morning.