August 17, 2014
Day 3 of the 2014 Sierra Challenge involved Patricia Peak out of Rock Creek as the main Challenge peak. This day was meant to be a dedication to Pat Hadley, who had taken a fall and passed away on Diamond North on the 2013 Sierra Challenge. The peak was very easy, and the 6am start time was generous in order to maximize participation. Bob had planned a sort of memorial for Pat on the summit at 8:30 in order to give everyone a chance to reach the summit in time.

Normally, this hike would start from the Hilton Lakes Trailhead (9,870 ft), but due to construction along the road, everyone had to park on the north side of Rock Creek Lake a little less than a half mile back (9,730 ft). Some people did not know this, and spent some time driving around before figuring out where they should park. Because of this, only about half of the day's participants were at Hilton Lakes Trailhead at 6am when Bob took the group shot and everyone took off. Personally I think we should've waited a little longer for everyone else since today was not timed.

Since we had a lot of time on our hands, Bob and I decided to climb Pointless Peak to the south of Patricia first before traversing to Patricia along a class 3 connecting ridge. Roughly 0.3 miles after leaving Hilton Lakes Trailhead, the northeast ridge of Pointless came into view, and we left the trail and made our ways towards it, doing some light bushwhacking through a few scraggly aspens in the process. The ridge started out slightly sandy and contained a pretty well worn in use-trail. After a few hundred feet, the use-trail disappeared and the ridge turned into class 2 rock hopping and light bushwhacking for the remaining distance to the summit. 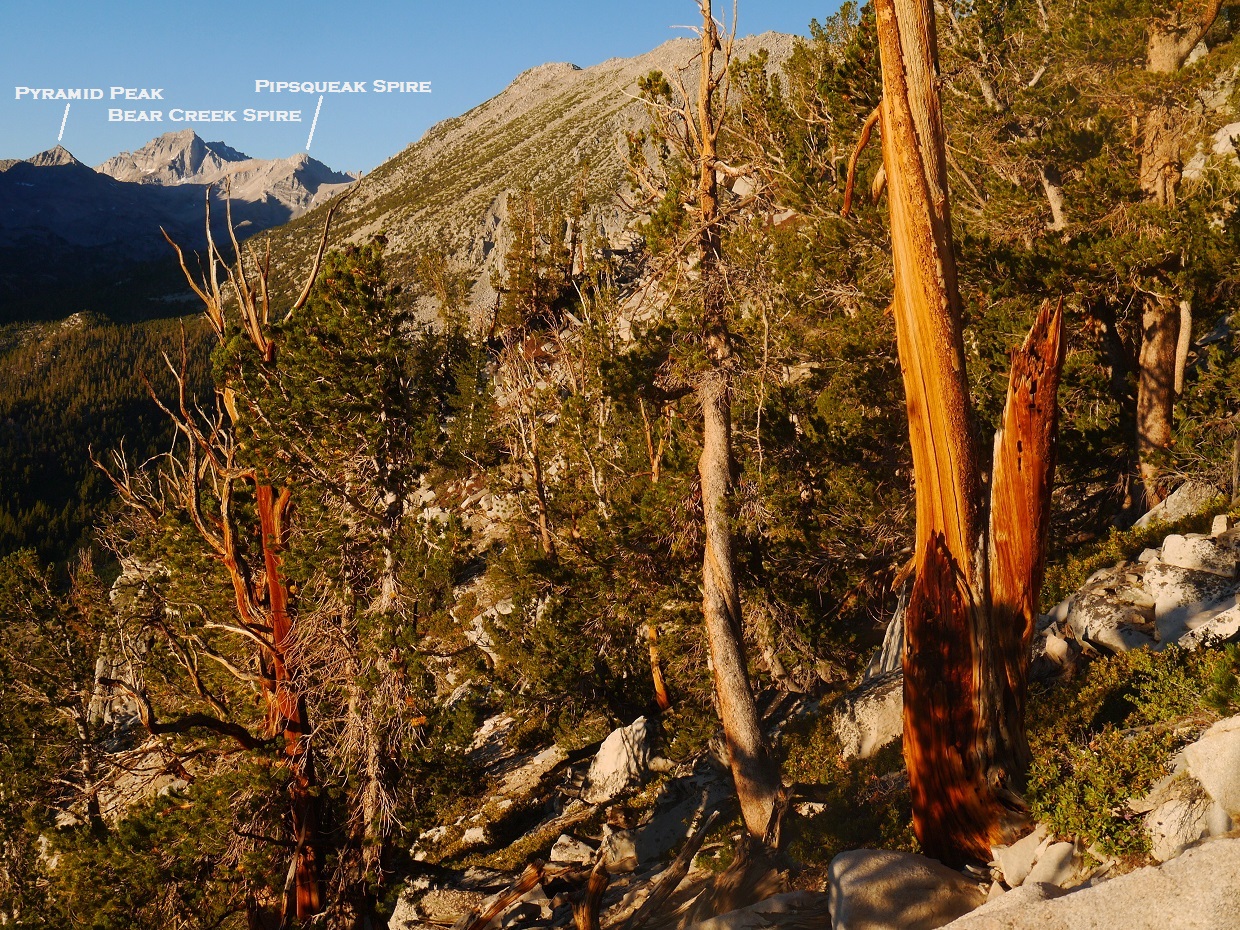 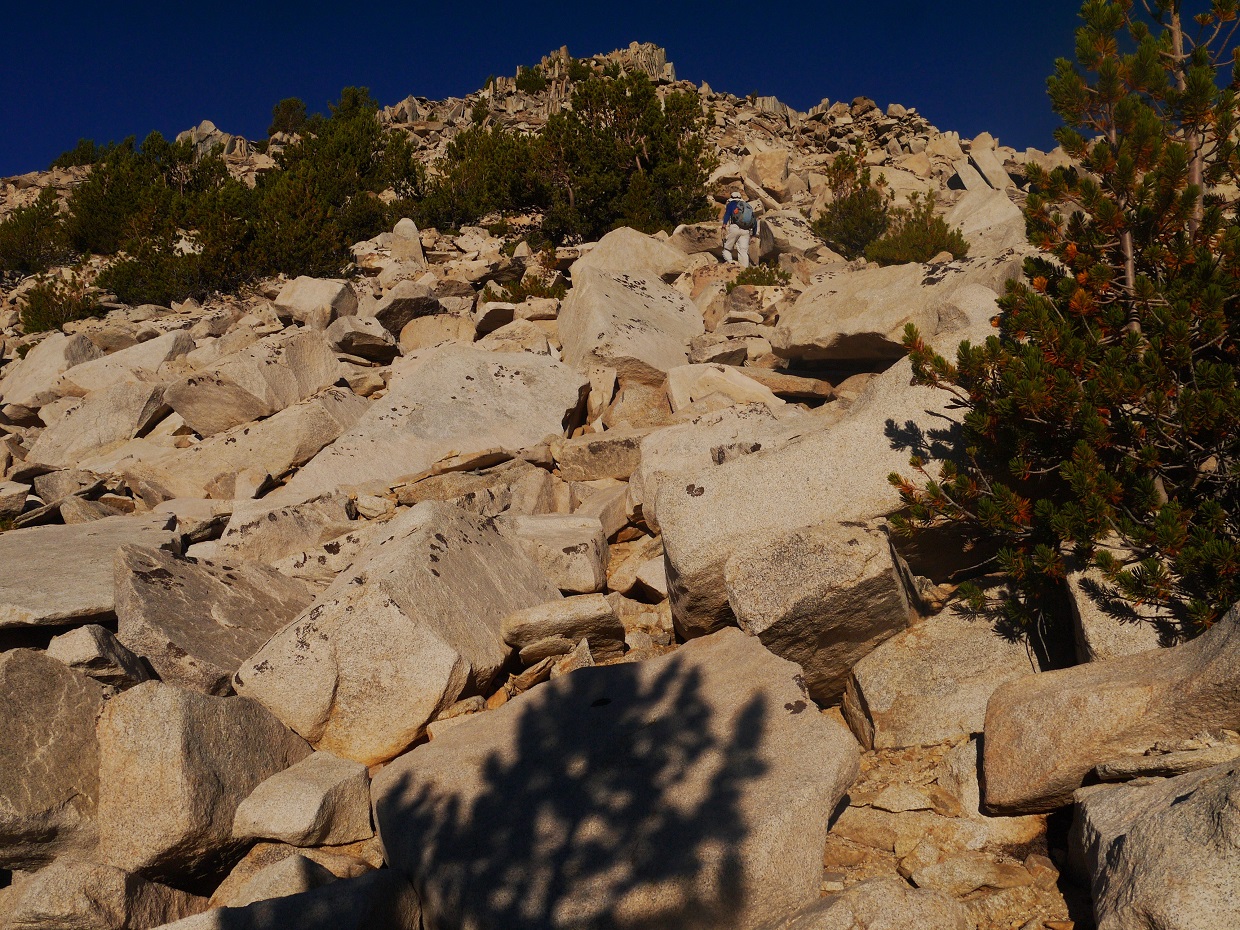 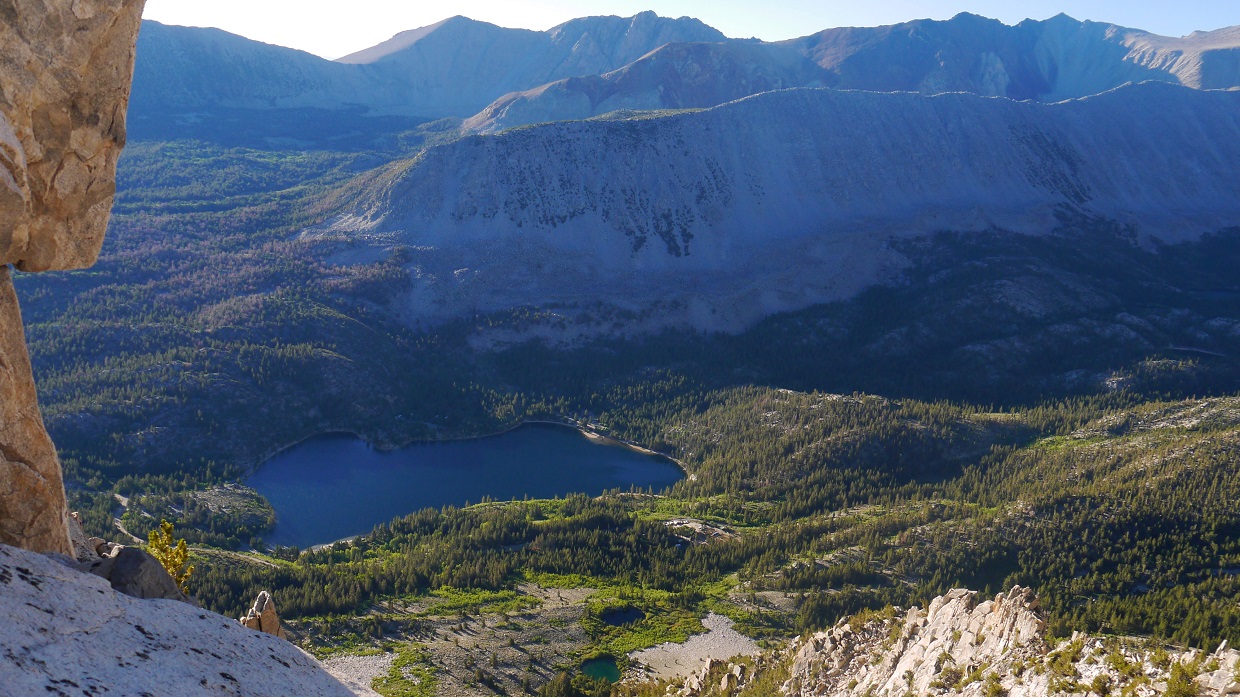 We remained on the crest of the ridge until ~11,800 ft, where the ridge cliffed out and we downclimbed a short class 4 crack on the south side. This class 4 can be avoided by staying a short distance on the south side of the ridge beforehand. By 7:30am, the two of us were standing on the plateau summit of Pointless Peak. Bob quickly signed the register and made his way towards Patricia. I wolfed down a slice of cold pizza, then hurried after him. 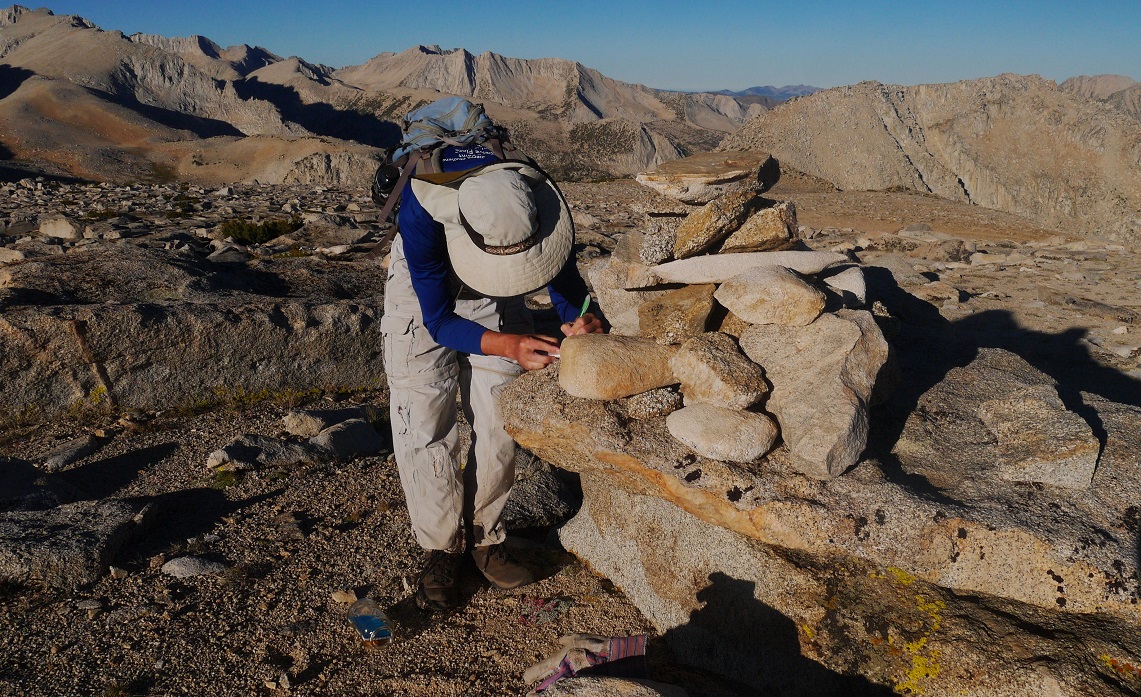 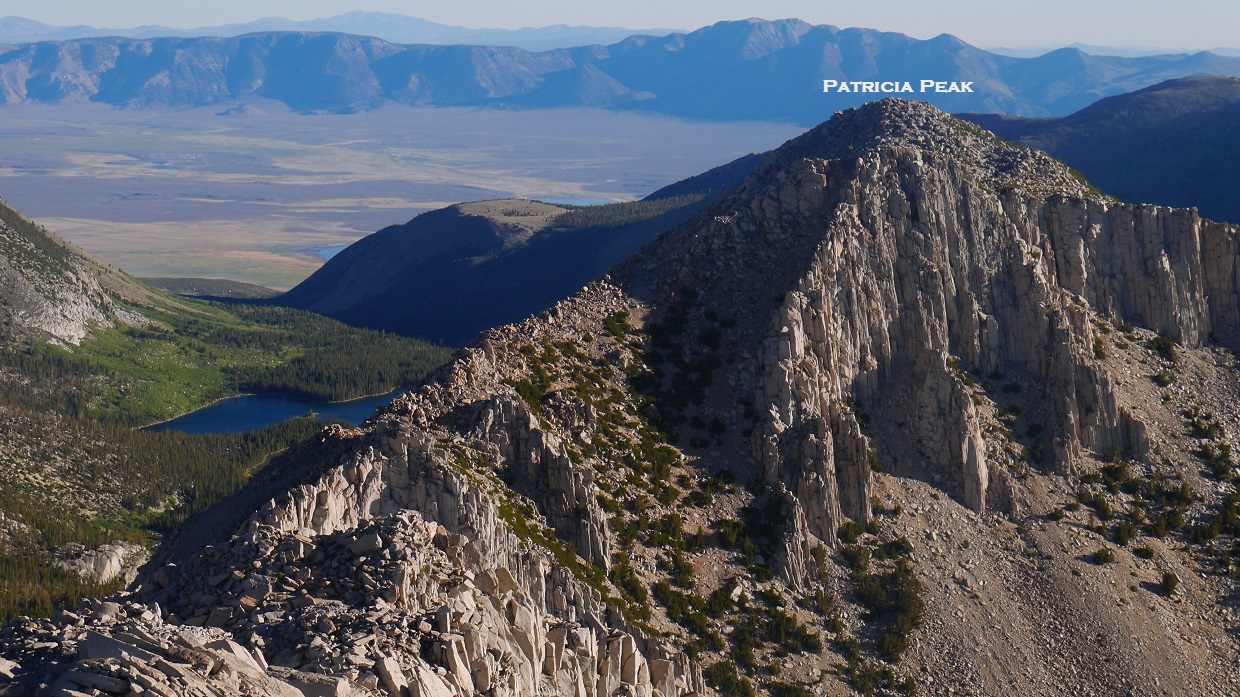 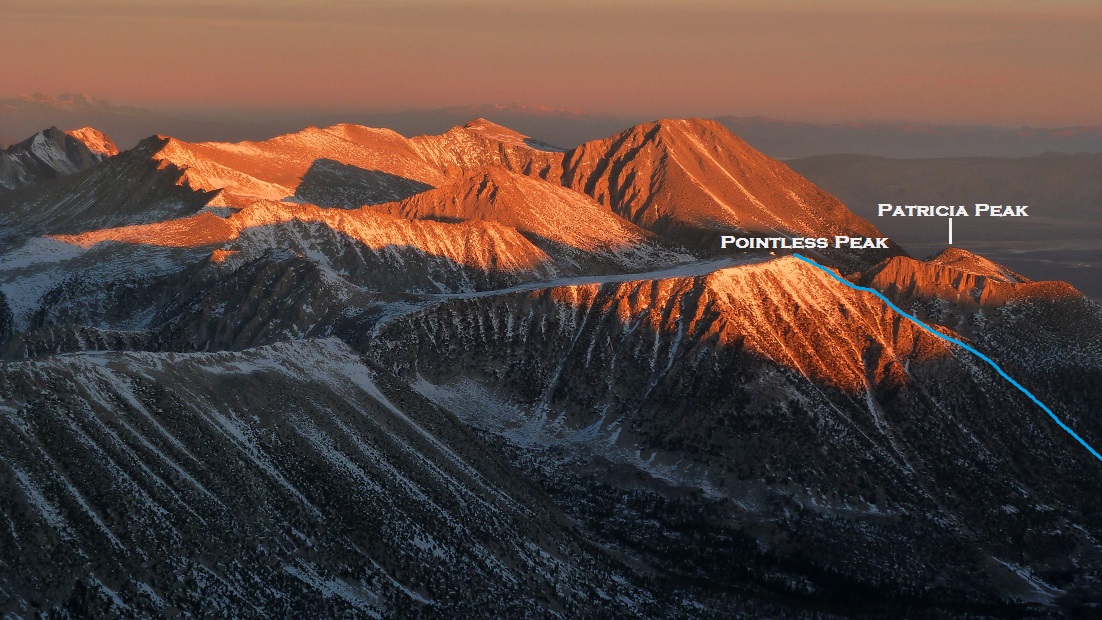 The traverse over to Patricia was a short and enjoyable climb on solid blocky granite. Bob had done it before and mentioned that it was one of his favorite class 3 ridge traverses. 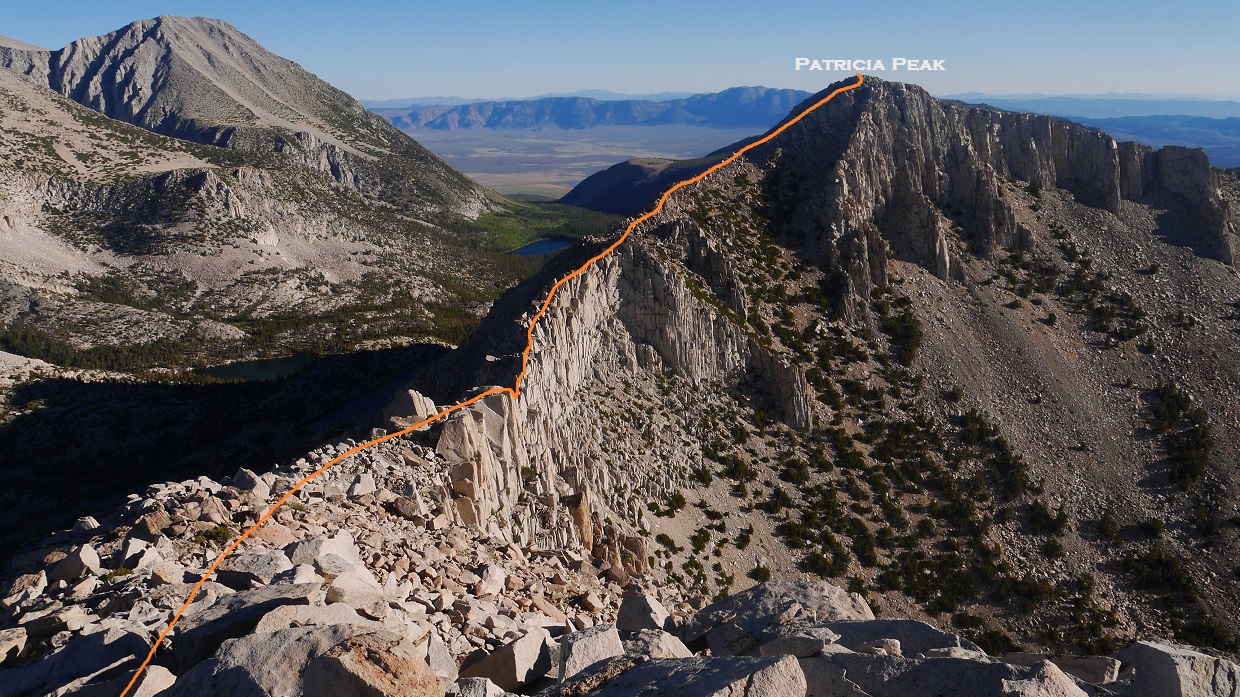 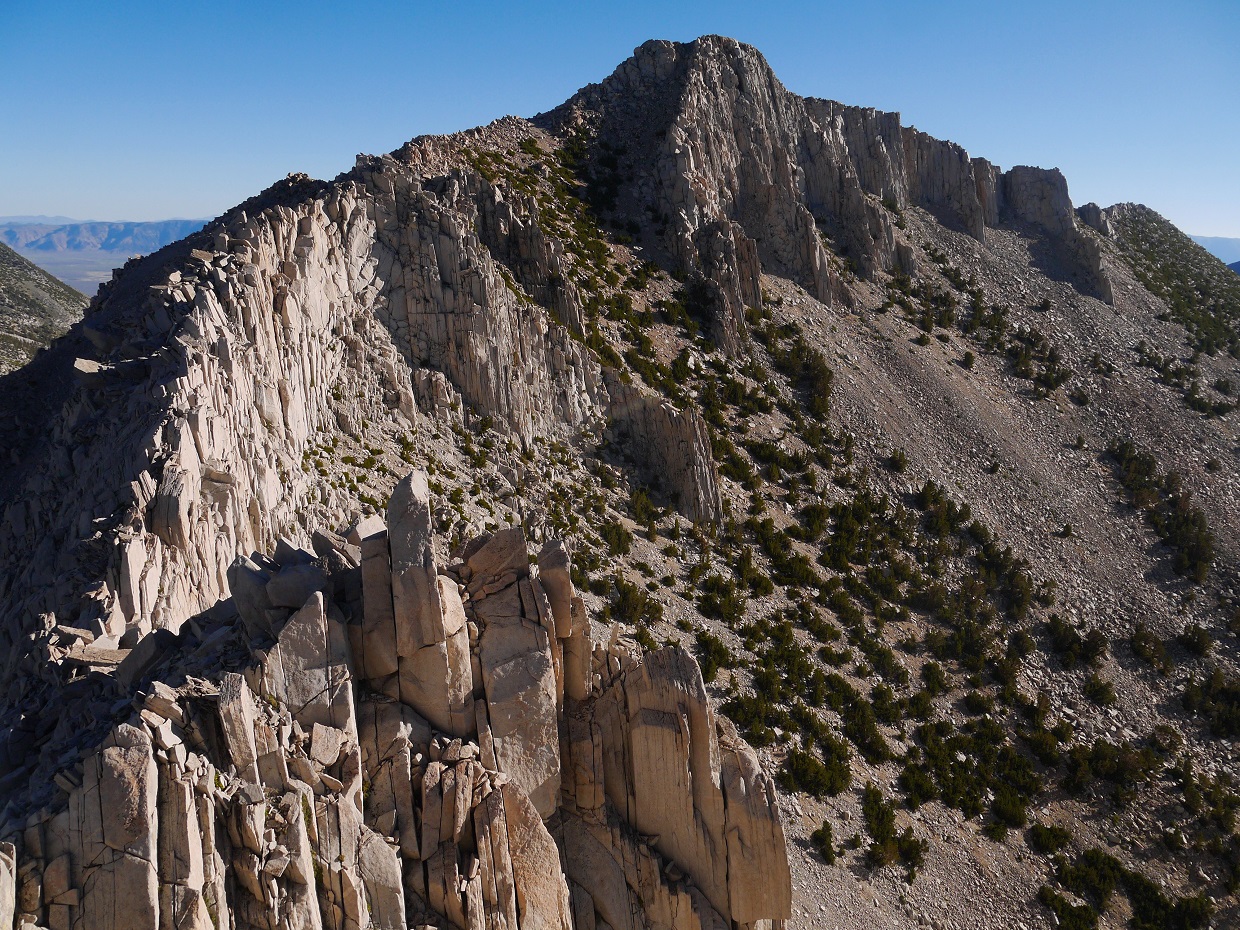 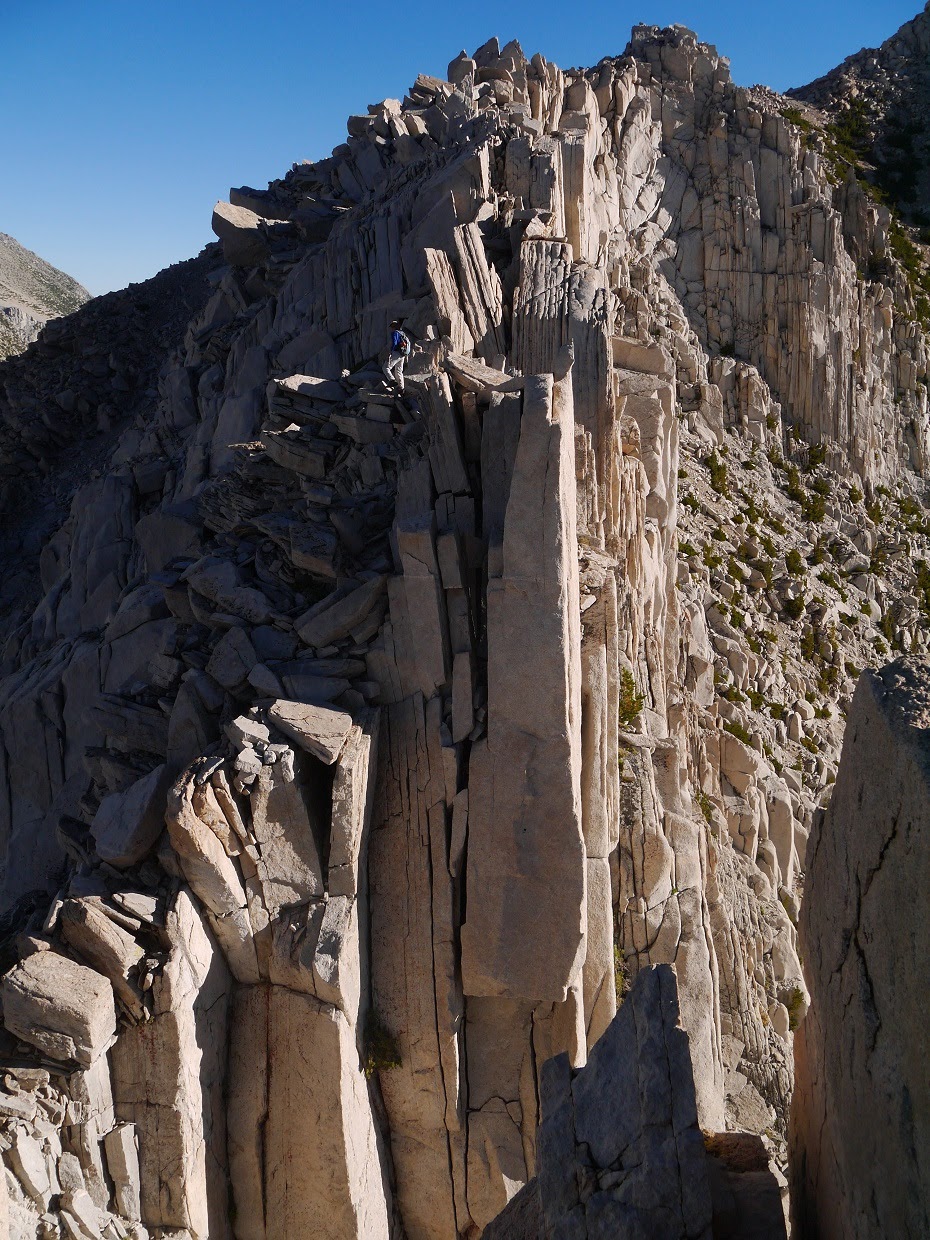 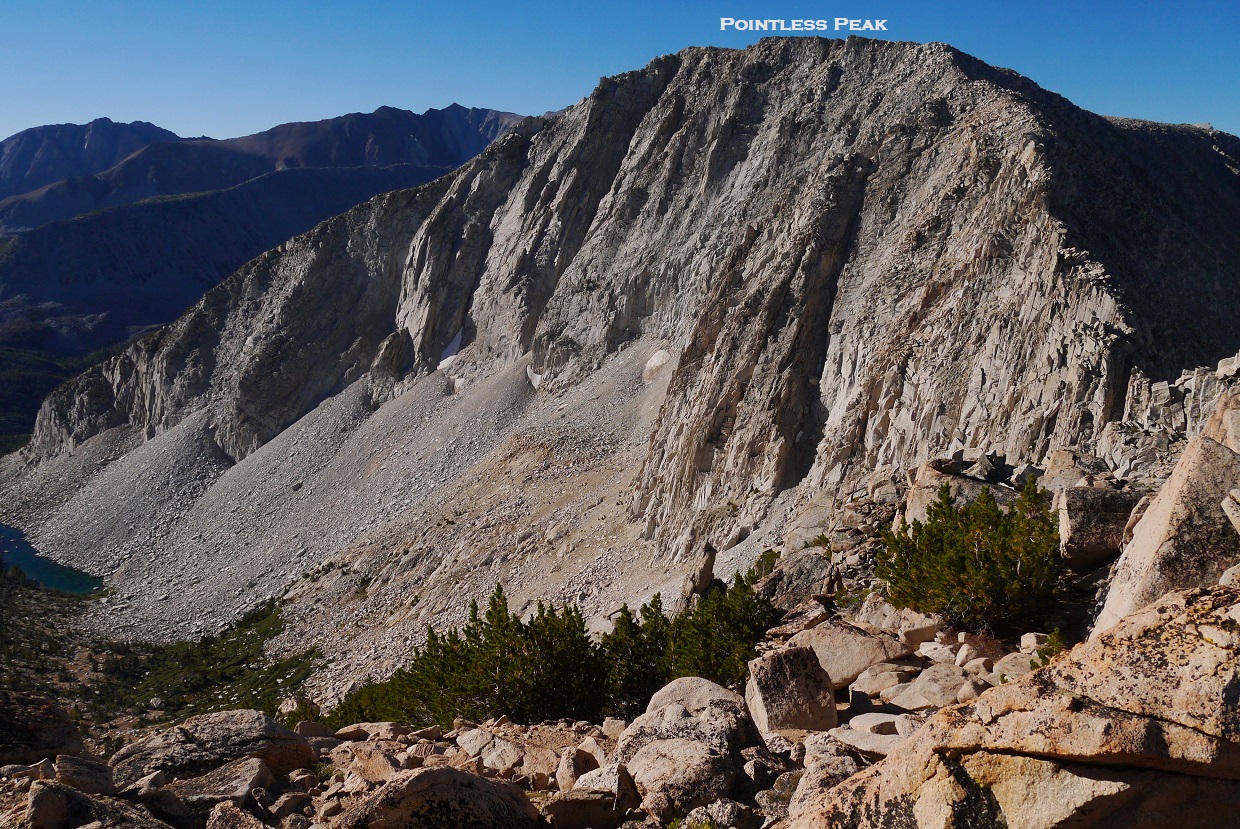 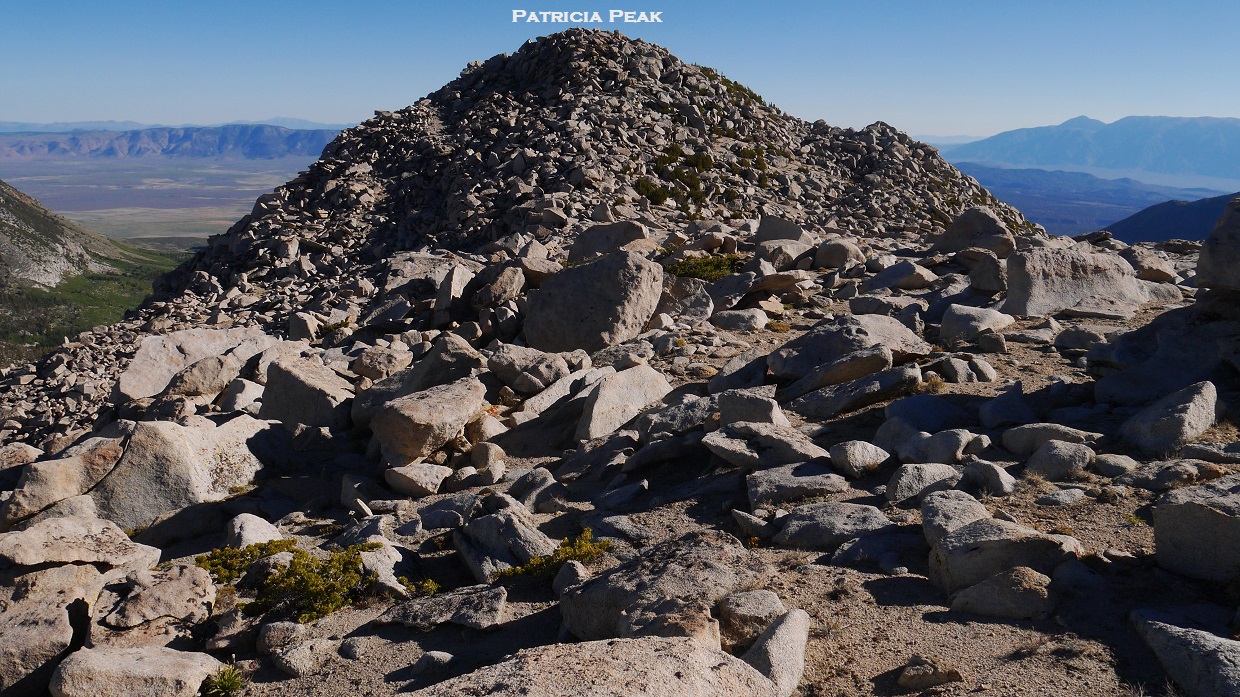 We arrived at the summit at around 8:35 to find roughly 15 others already there. To the southeast, a steady stream of people were still making their ways up a large sandy plateau. They had all ascended via Patricia's southeast ridge. Later we found out that several others had accidentally ascended Pointless Peak's northeast ridge, mistaking it for Patricia. 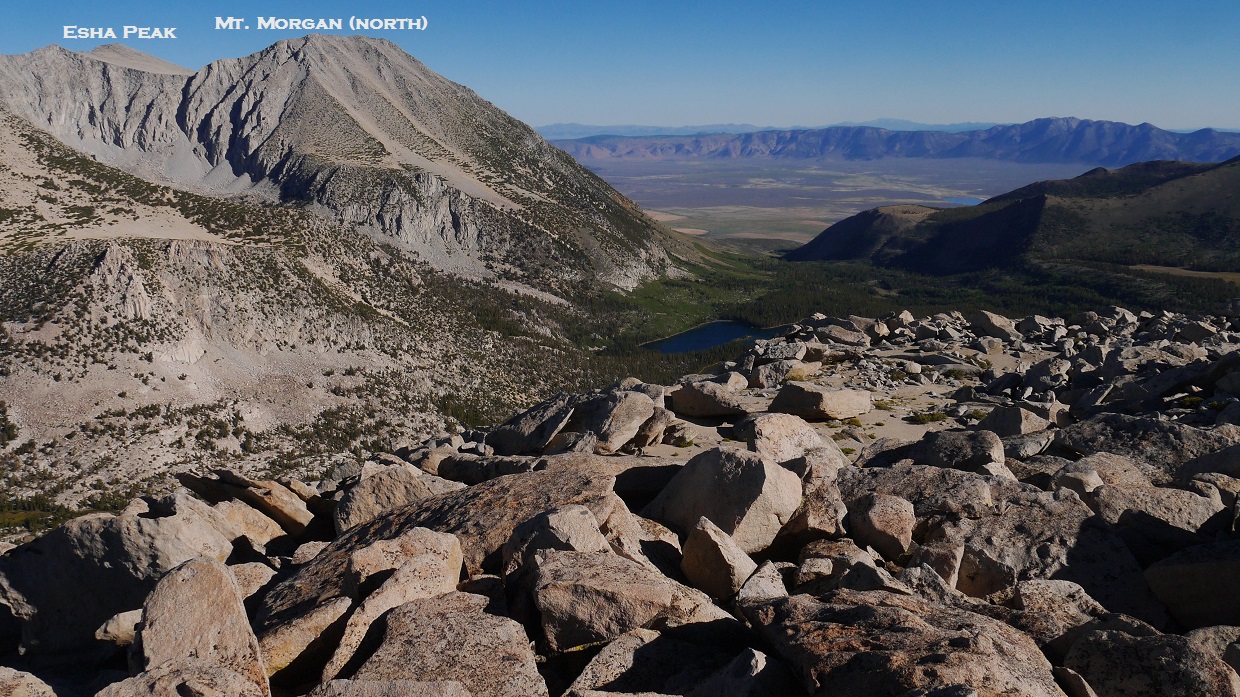 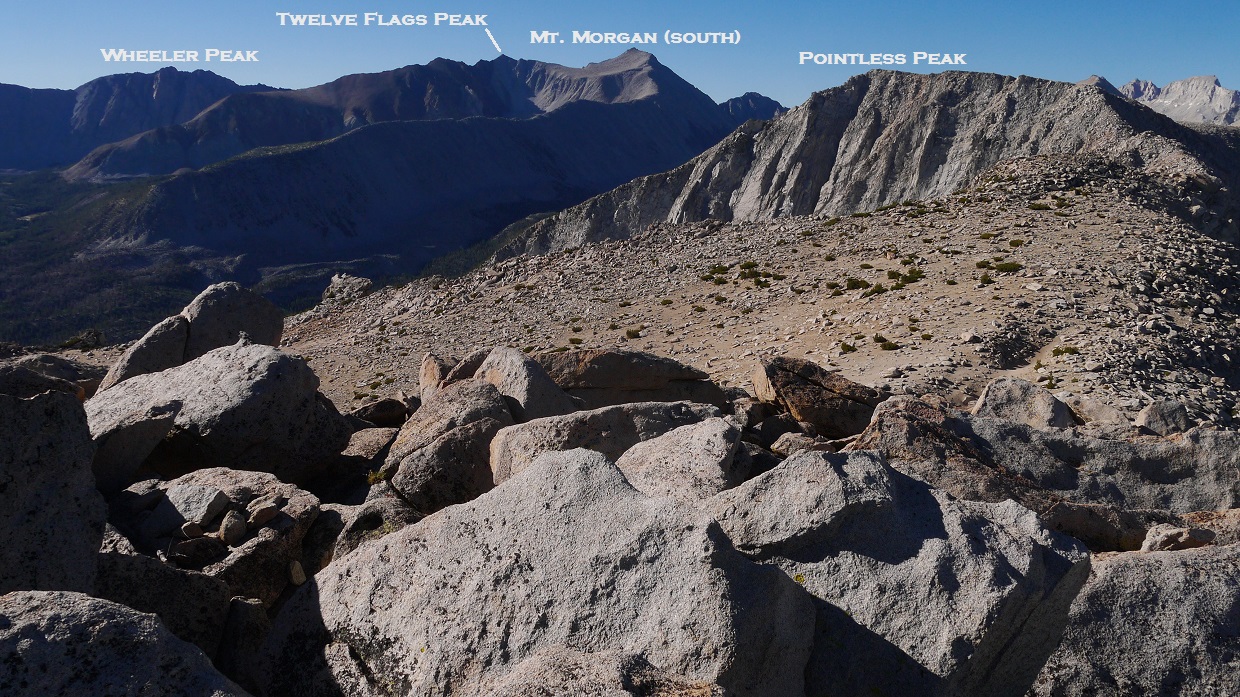 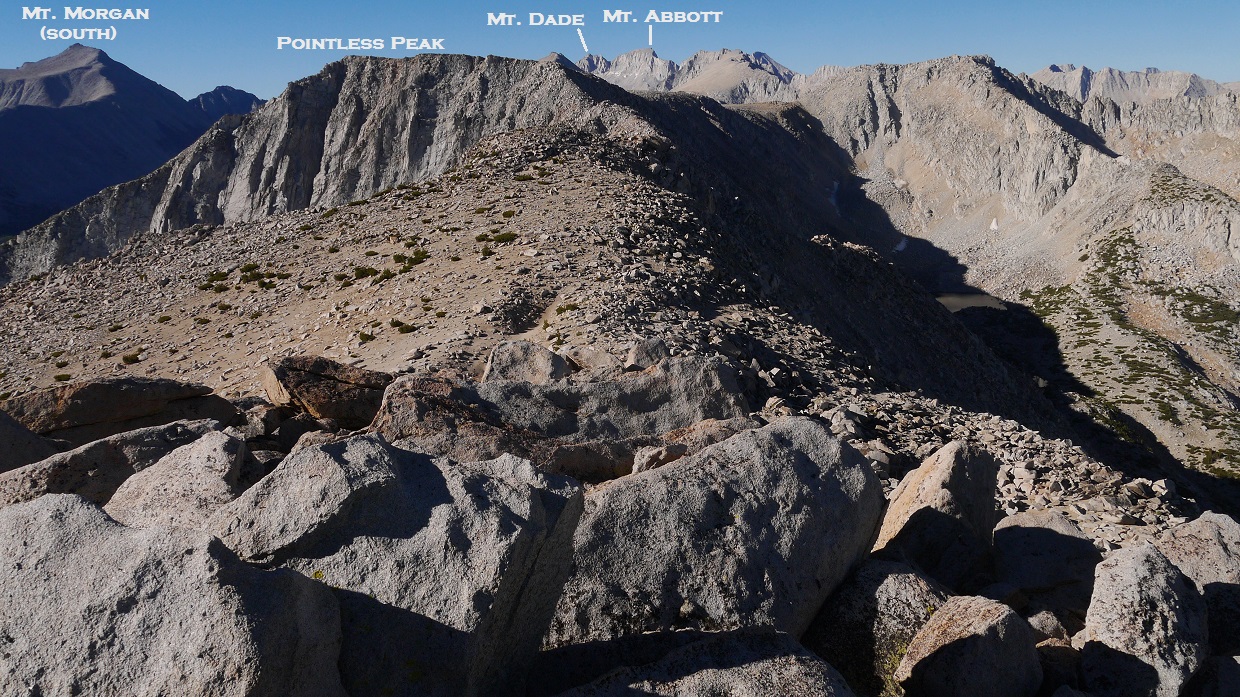 Jonathan building one of his signature cairns on the highpoint 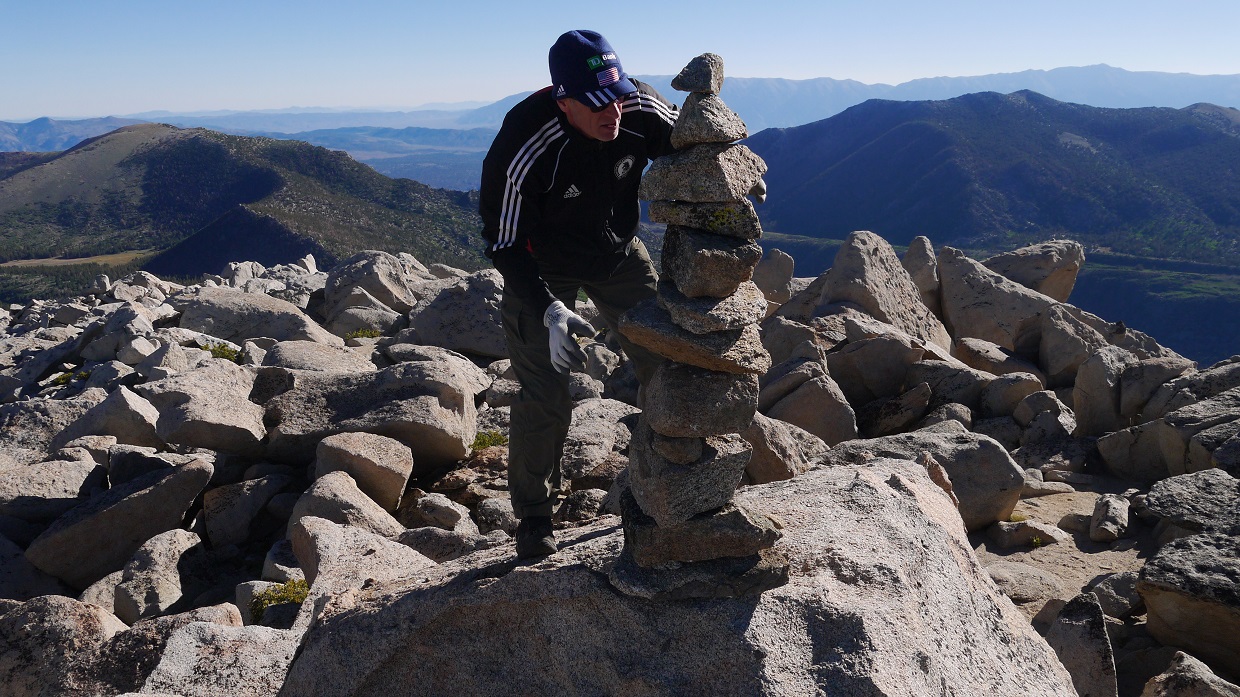 By 9am, roughly 25 had reached the summit, and we began the memorial (there were still about 10 or 15 more at the moment making their ways over after accidentally climbing to Pointless first). Someone started off by reading a poem that Laura Molnar (who couldn't be with us today) had written and left on the summit a few weeks before the Challenge. After she had finished, Bob read a reflection he had written on Pat, mentioning how much she was always willing to help others and how much she would be missed. After that, Bob handed it over to the group and those who knew Pat shared individual stories and different experiences and adventures they had had with her. It was a very reflective and memorable moment. 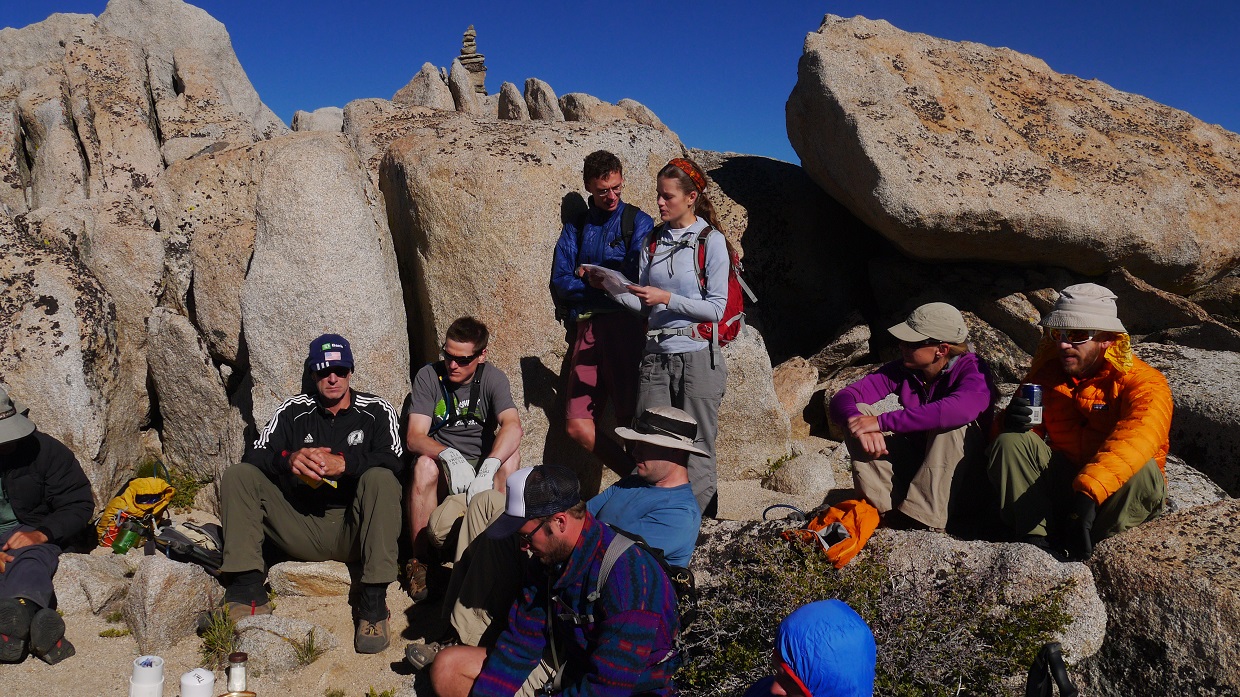 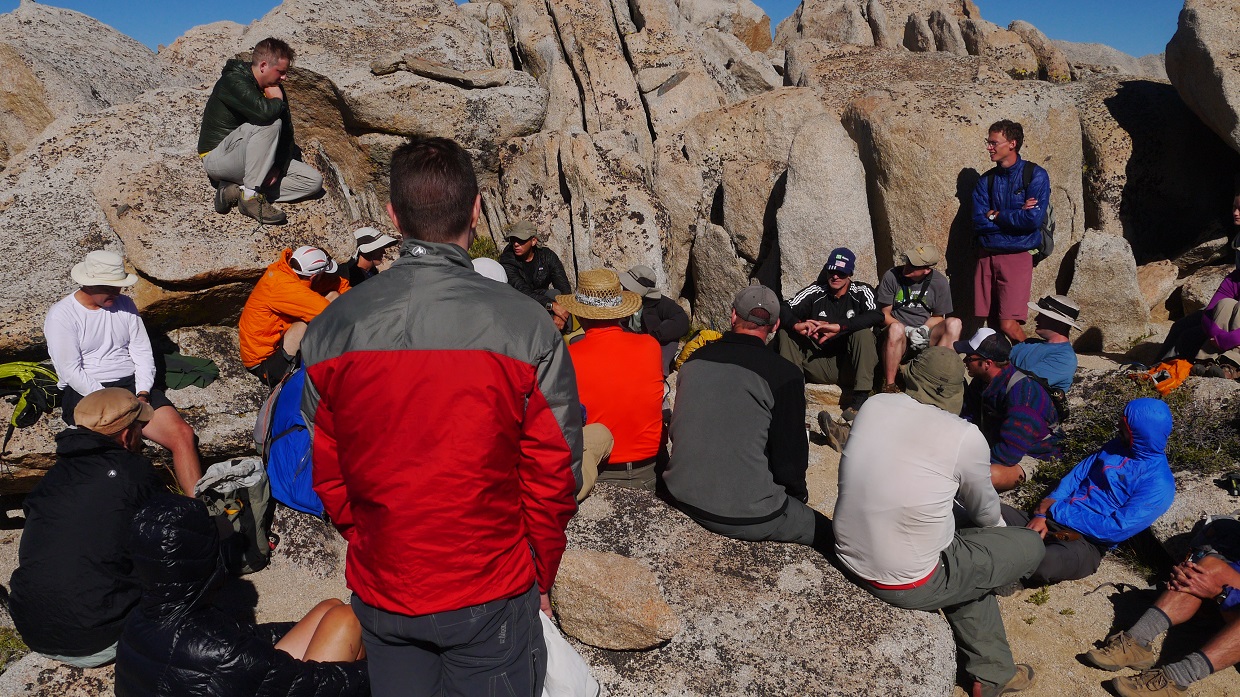 The memorial lasted about 40 minutes, after which we all remained on the summit for a few moments before gradually trickling down various sides of the mountain. Most headed back down to the trailhead. Others went on to climb other peaks. Bob headed northwest towards Hilton Peak which I had already climbed, and I headed down Patricia's northeast ridge towards Red Mountain which Bob had already climbed. Several others were heading to Mt. Morgan north- a very popular peak in the area due to it being the highest peak surrounding Hilton Lakes. 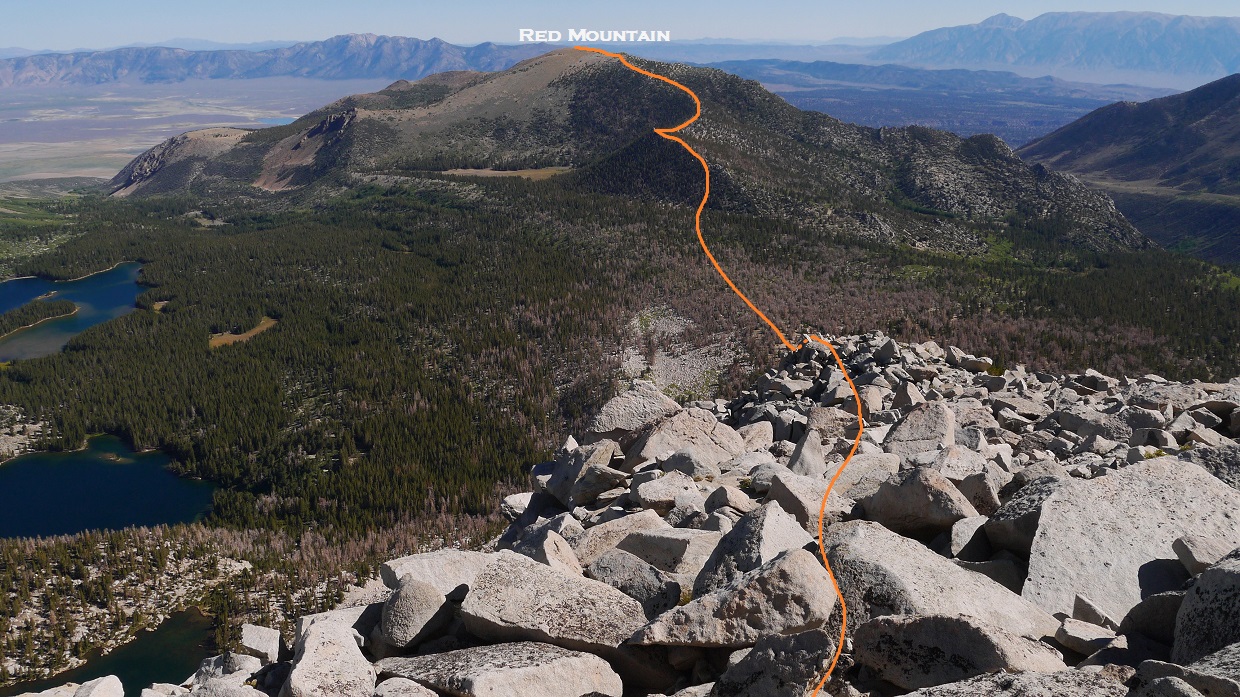 Patricia's northeast ridge contained mostly large class 2 blocks with a nice sandy slope near the bottom. As I reached the large plateau at the base of the ridge, I crossed the Hilton Lakes Trail and headed in a general northern direction, gradually descending towards the base of Red Mountain's south ridge. 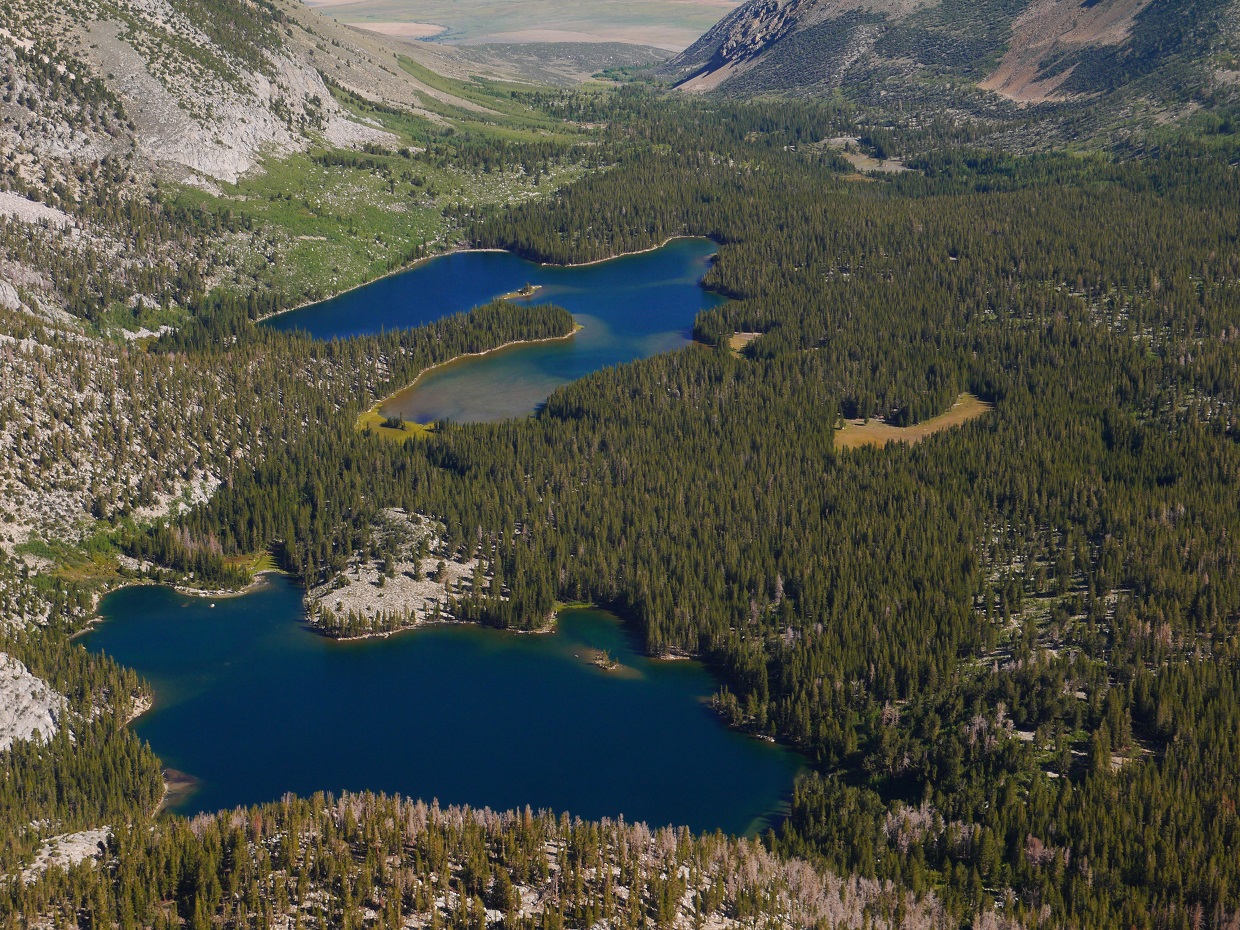 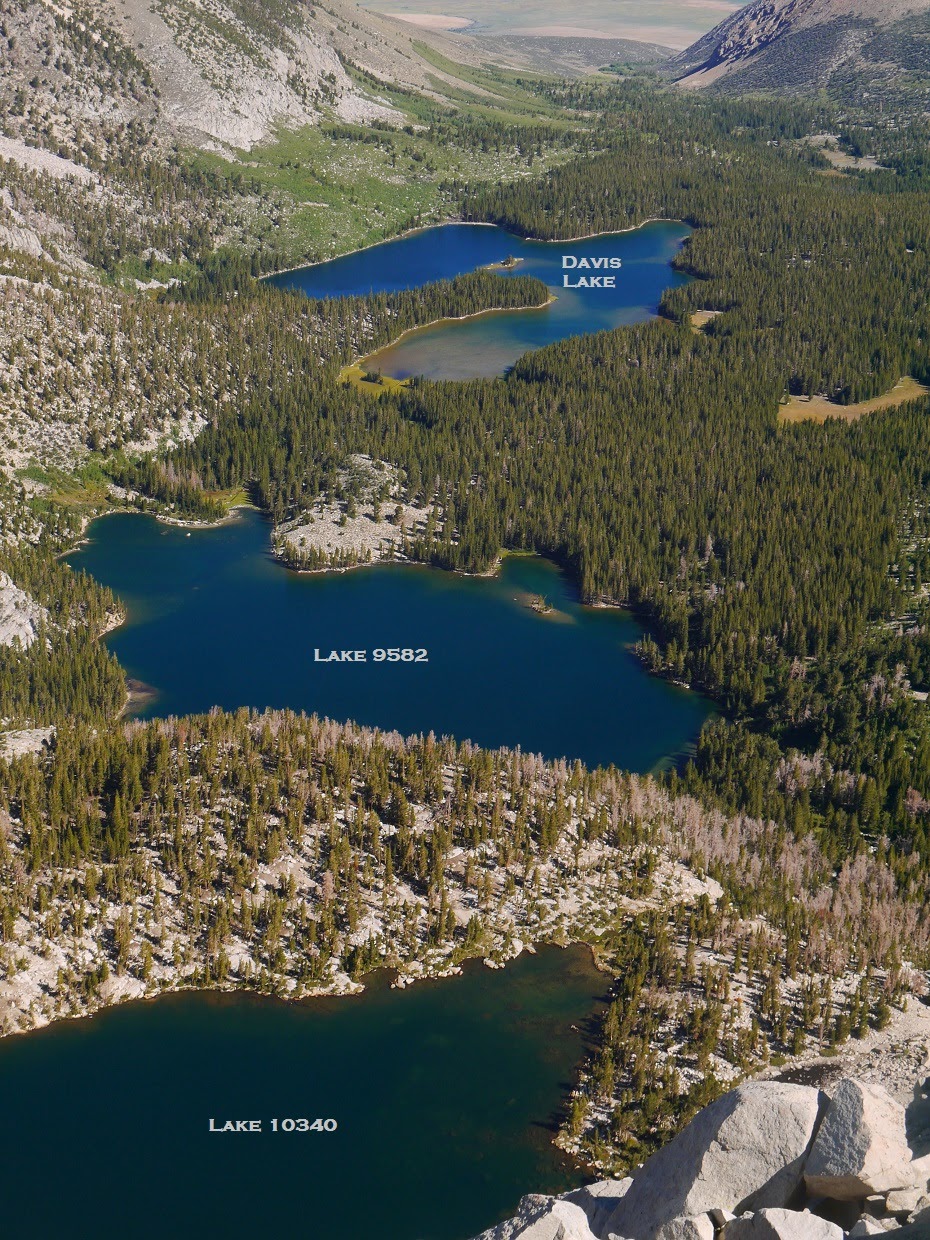 base of Red Mountain's south ridge 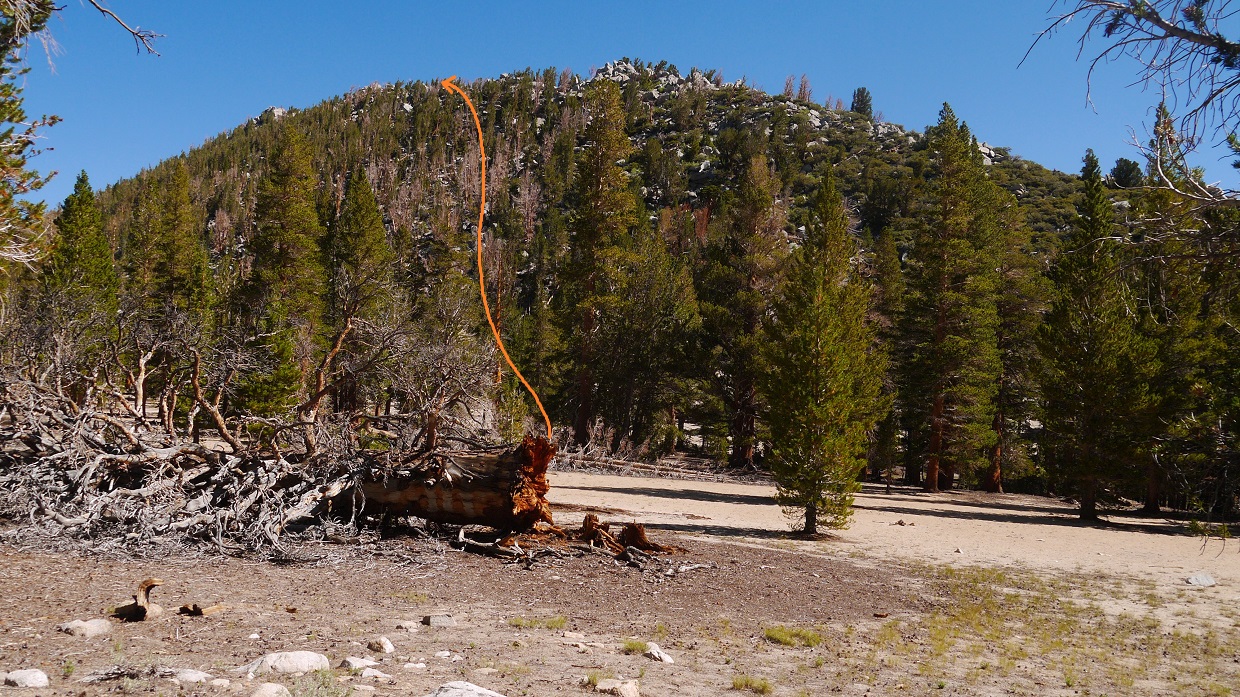 Getting onto Red's south ridge turned out to be very sandy and sloggy, but short. This part was going to be a fun descent. After that, the first half to the summit was a mix of large blocks, sand, and minor bushwhacking. It was easier to stay just below the ridge on its eastern side in order to avoid ups and downs on large boulders. The second half involved a straightforward slog up a low grade sandy slope. The summit was a large plateau which contained good views of the peaks surrounding Hilton Lakes. A rockpile marked the summit, but there was no sign of a register except for a rusted can of fish which had been shoved into a gap in the rockpile. 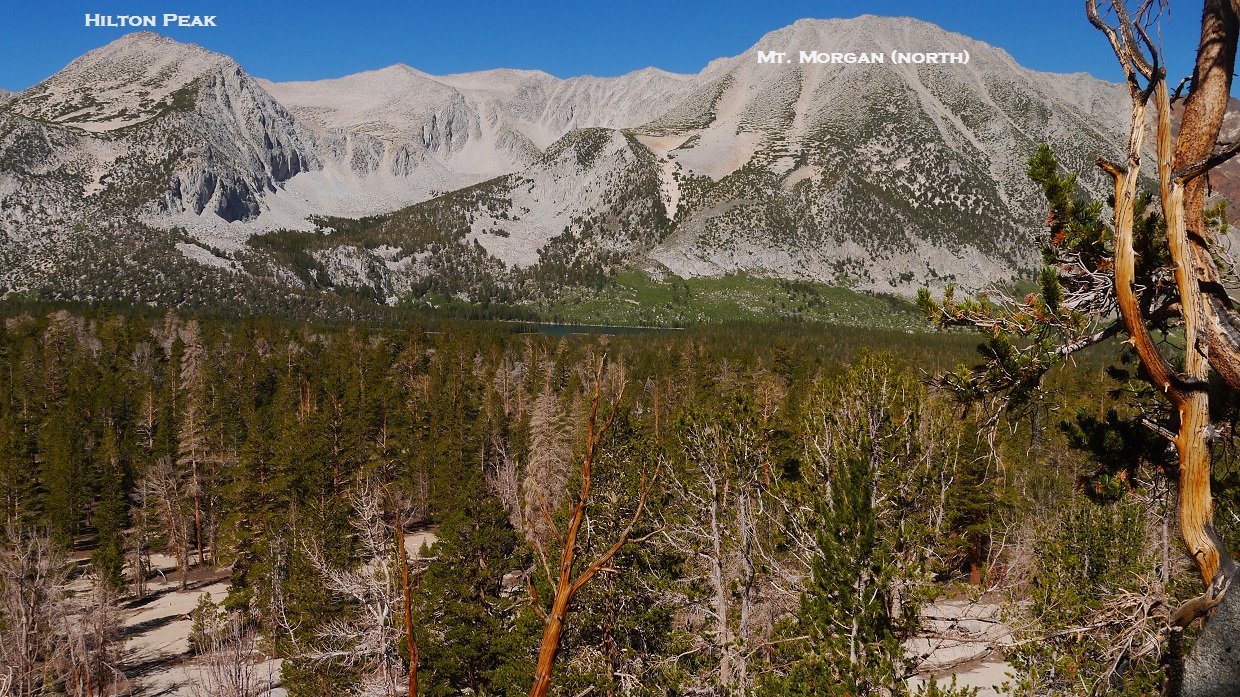 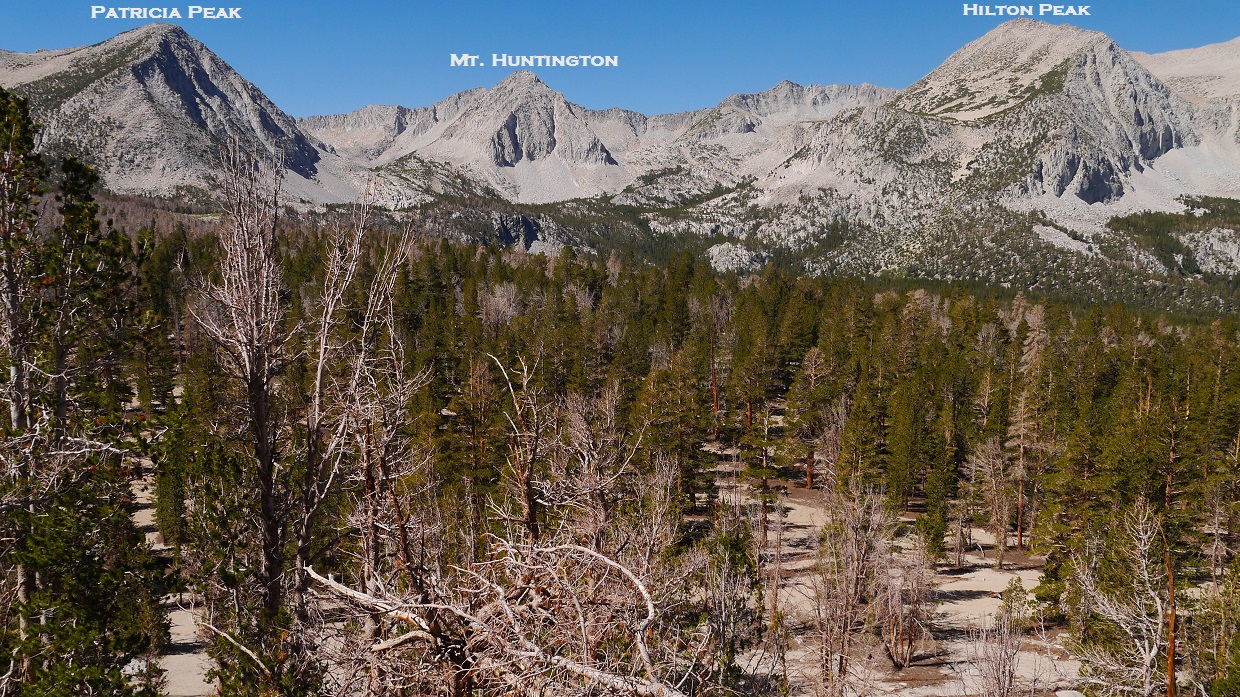 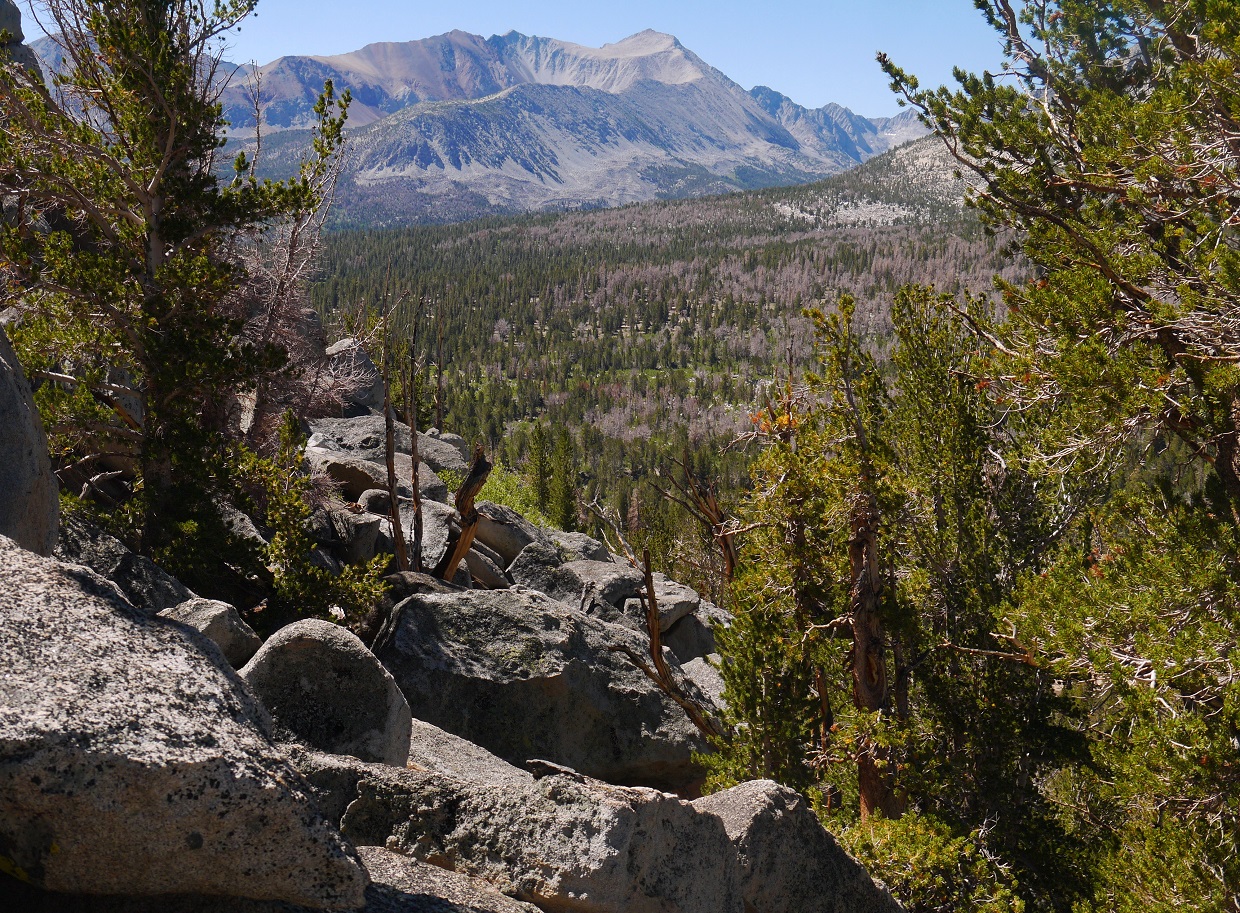 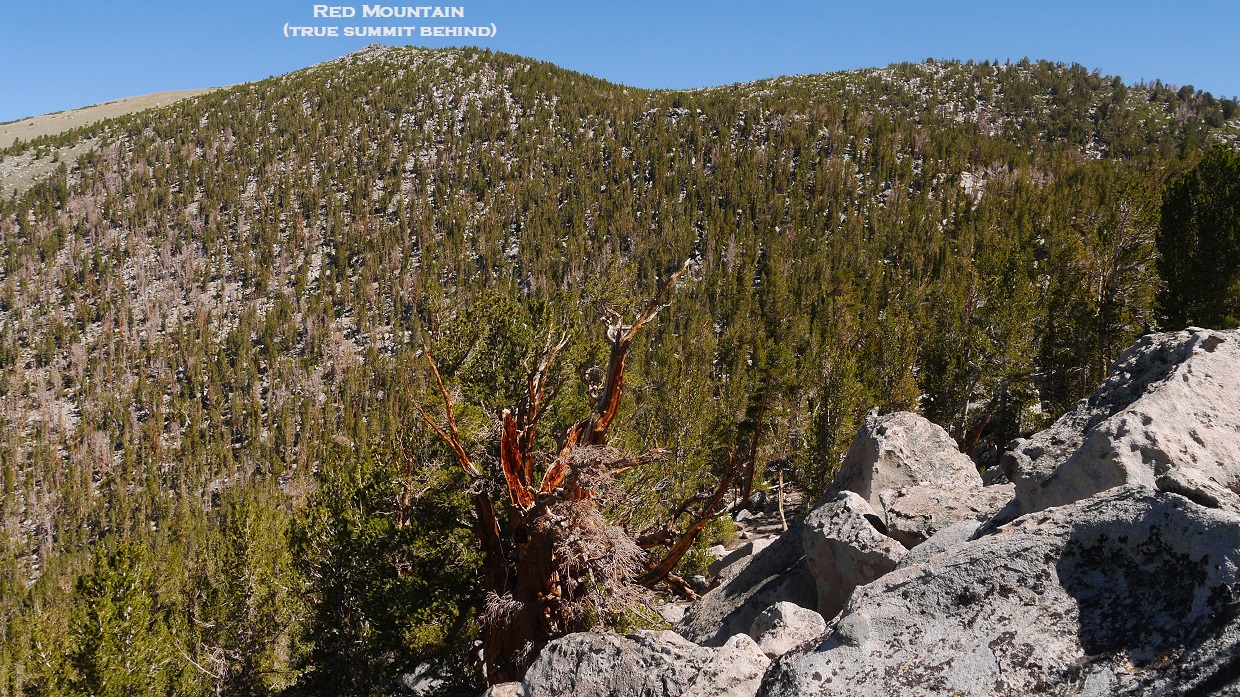 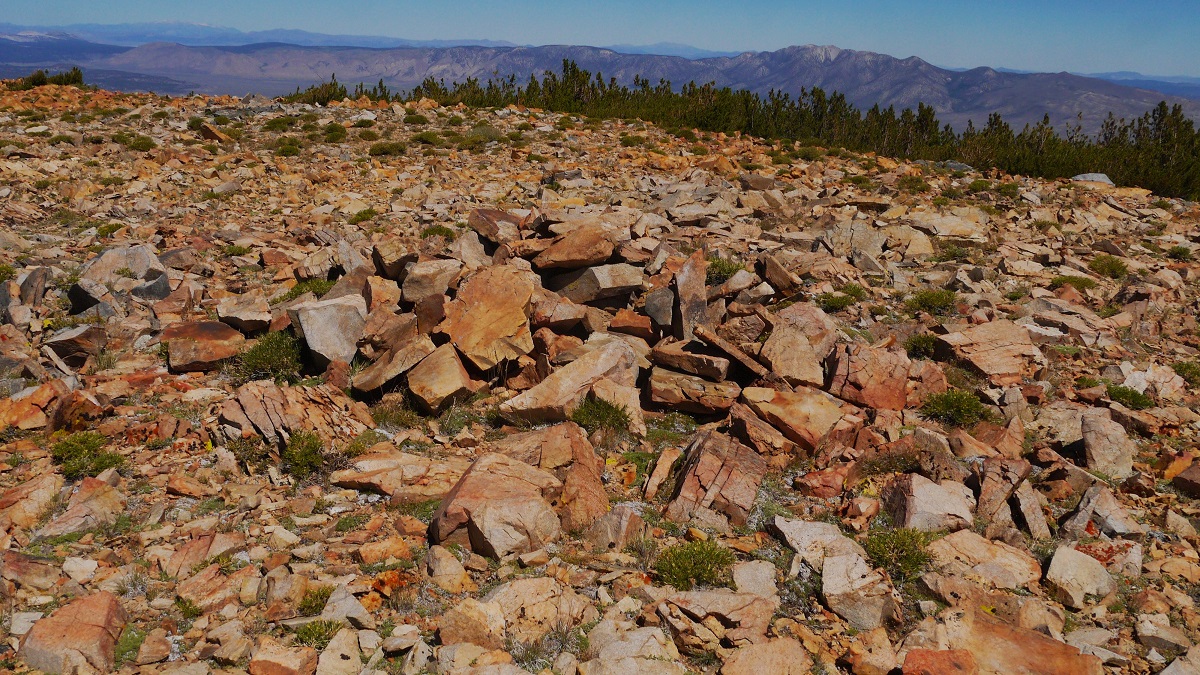 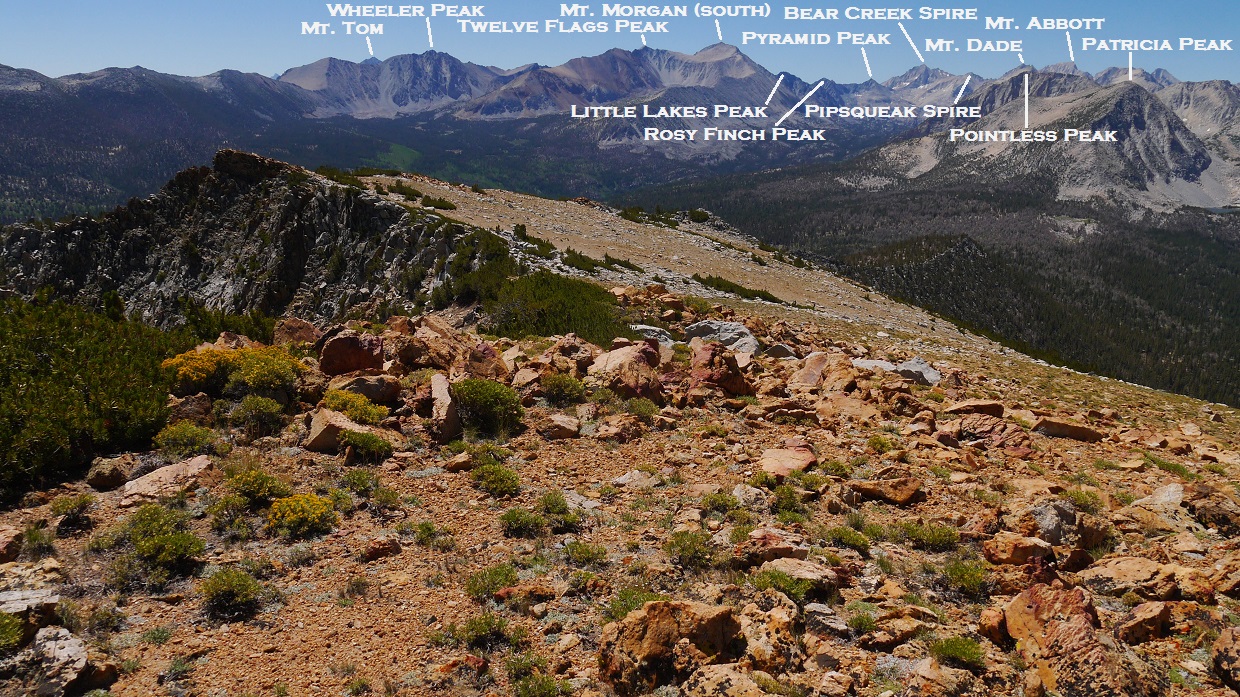 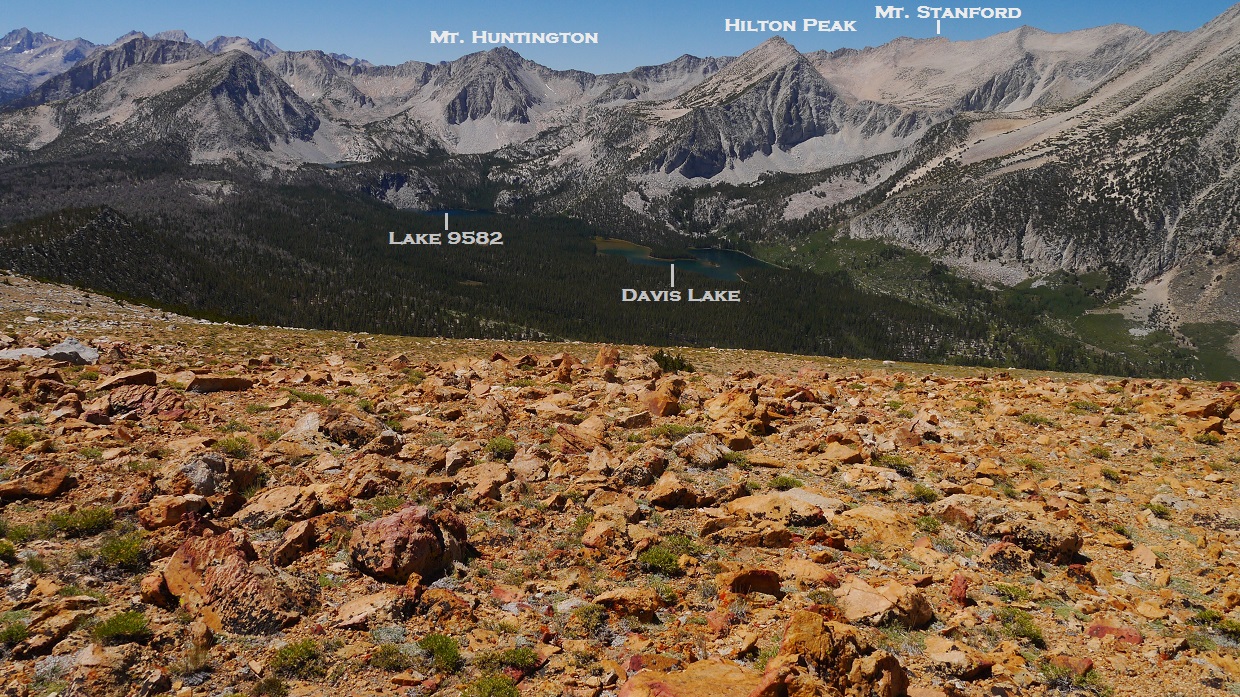 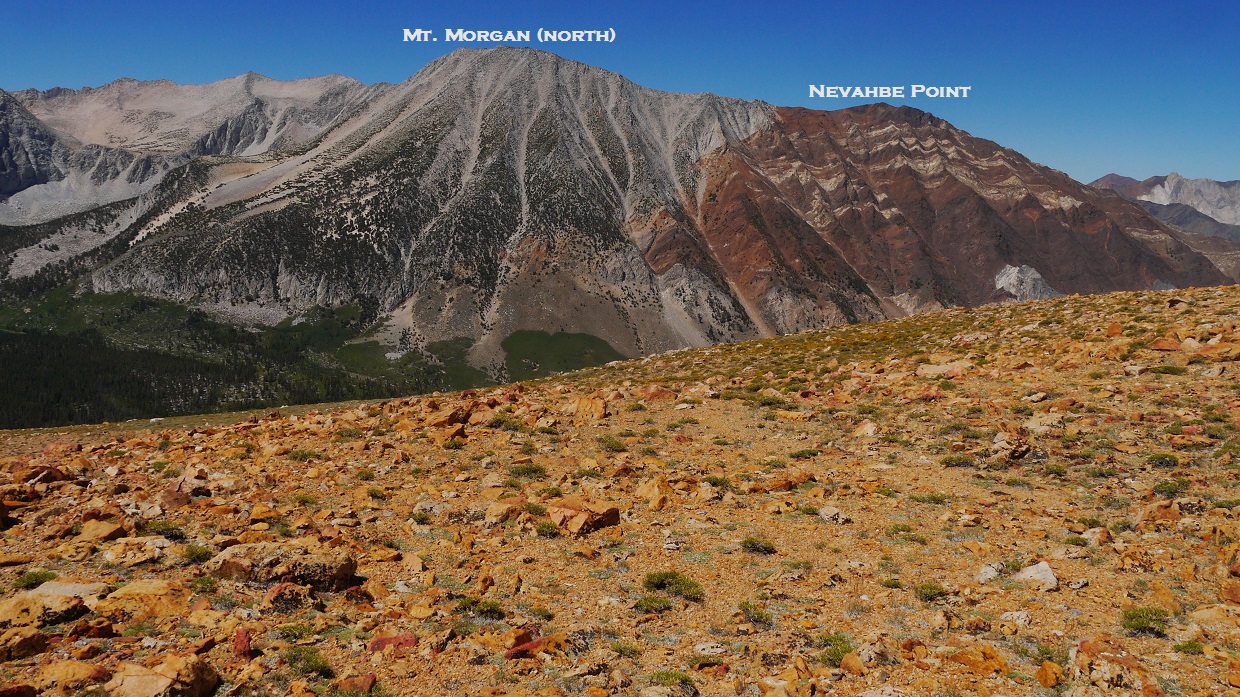 To get back, I retraced my steps back to the Hilton Lakes Trail at the base of Patricia Peak, and followed it 3.5 miles back to the trailhead. Aside from the fresh horse poop which had a reeking stench made worse by the hot sun beaming on it overhead, the hike back was quite pleasant.