June 24-26, 2019
Mithral Dihedral (also spelled "Mithril Dihedral") is an aesthetic 500 ft long dihedral running up the southwest side of Mt. Russell, which contains some of the longest continuous single cracks in the High Sierra. The main crack of Mithral Dihedral consists of mostly clean and perfect hand jams, with a short offwidth and lieback section thrown in. It's a must-do route for many High Sierra Climbers, who must brave the short but strenuous approach and the highly annoying Whitney Zone permit system.

The Steph Abegg topo which is widely used for Mithral Dihedral 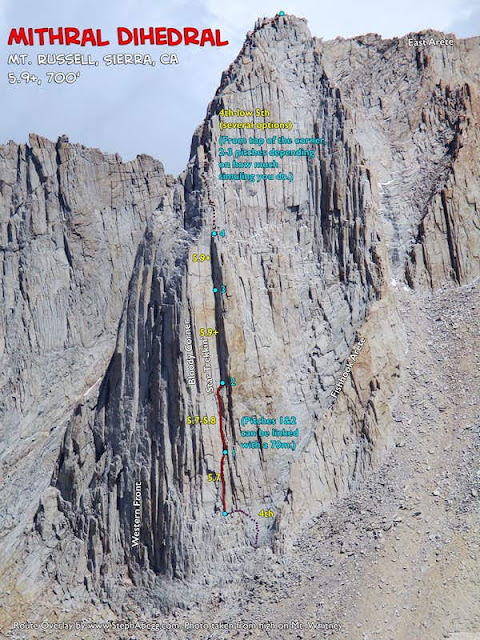 Getting to the trailhead: From Lone Pine off of Hwy 395, head west on Whitney Portal Rd for 13 miles to a parking area. 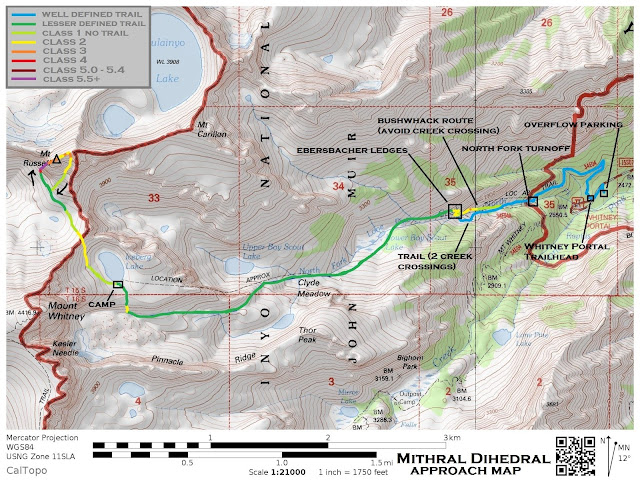 Due to the high 2018-2019 snow year, Donatas and I lucked out in finding it very easy to secure an overnight permit the morning of. Most of the approach for Mithral Dihedral was the same as the one for Mt. Whitney's Mountaineer's Route. Whereas the Mountaineer's route began heading up towards Whitney from Iceberg Lake, the Mithral approach continued northwest over Whitney-Russell Pass before dropping west of the Sierra Crest. We planned to hike in to Iceberg Lake on Monday, climb Mithral Tuesday, and then climb Fishhook Arete Wednesday and hike out. Since we were not acclimated, climbing Fishhook was a strong "maybe," dependent on how tired we felt after Mithral.

We left Whitney Portal at 4:30 pm Monday, hoping to reach Iceberg Lake before dark. We hiked 0.7 miles up the main Whitney Trail before turning onto the steeper North Fork Trail. Due to the ample snow and warm temperatures, the North Fork of Lone Pine Creek was swollen beyond its normal banks, and we decided to bypass the two standard creek crossings by staying in the north side of the canyon with some nasty bushwhacking and class 3. We reached Iceberg Lake 20 minutes after sunset after briefly floundering around the incorrect final gully to reach it. It was just getting late enough to break out the headlamps. Surprisingly, we located a dry patch of flat ground amidst all the snow, and set up camp there. 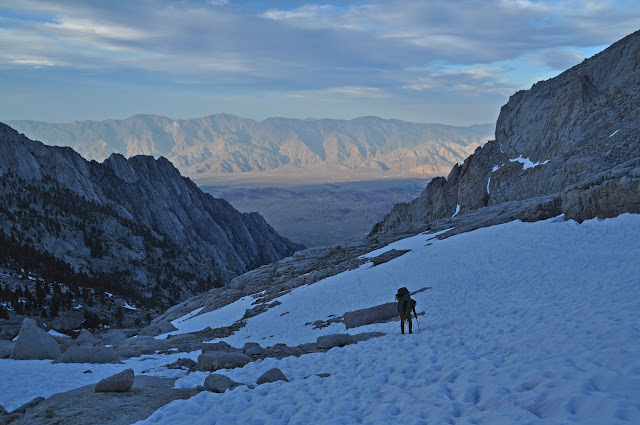 The night was filled with short bouts of unrestful sleep due to non acclimation. We woke up late and didn't leave camp until almost 10am. From Iceberg Lake, we made a gradual upward contour towards the northwest, aiming for the visible lowpoint notch in the crest between Whitney and Russell.

Upon reaching the notch, Mithral was in full view, looking impossibly vertical at first glance. A use-trail brought us to the base of the route where we cached out ice axes, since the South Slope descent would bring us right back to that spot. 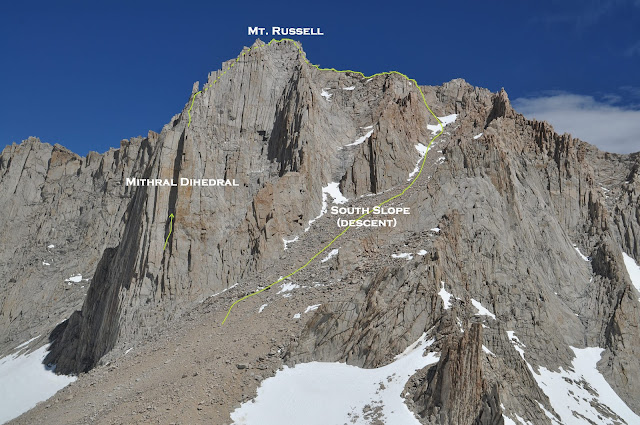 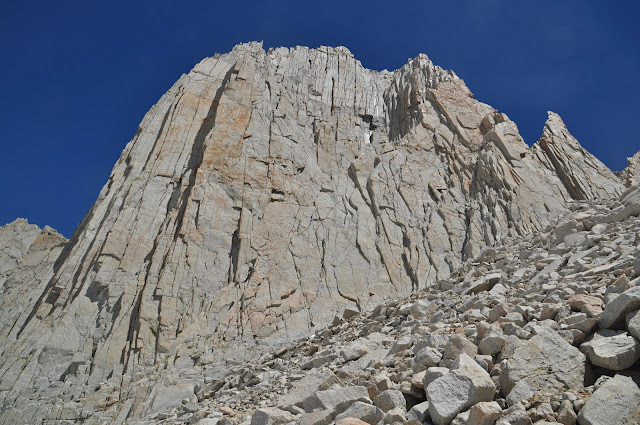 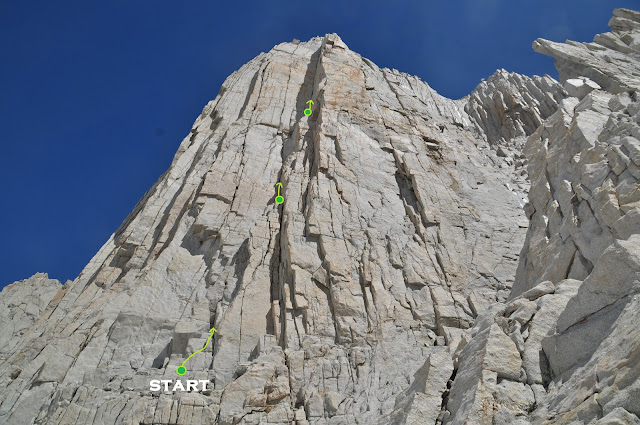 About 40 ft of class 4 brought us to a large starting ledge where we stopped to eat and rope up. We began the climb at 11am.

[NOTE: Pitches 3-4 on the Steph Abegg topo are usually done as pitches 3-5, which is how the following pitches in my description are numbered]

Donatas at the starting ledge 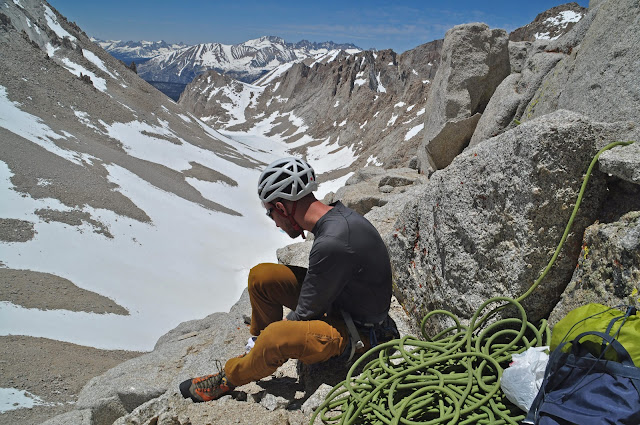 looking up the first pitch 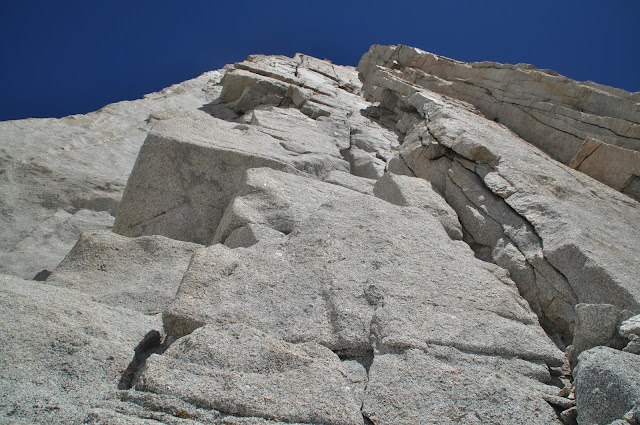 The first two pitches, 5.7 and 5.8, were a fun and mellow warm-up for the rest of the route. Pitch 1 ended at the first obvious ledge where I could stand comfortably, and pitch 2 ended where the main dihedral began. I found myself panting harder than usual due to altitude. It would only become increasingly hard to breathe up higher. 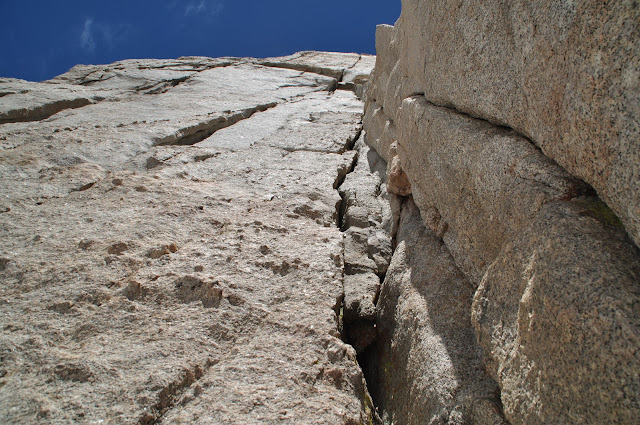 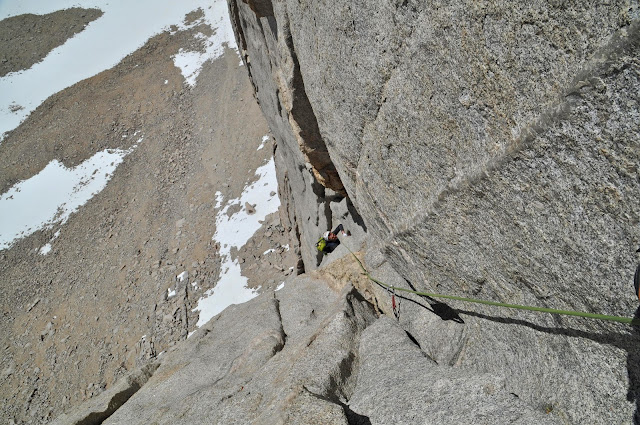 The third pitch was where the business began. This was a short pitch with perfect hand jams which ended at a spot where the angle eased, right underneath an obvious short wide section.

looking up from the start of pitch 3 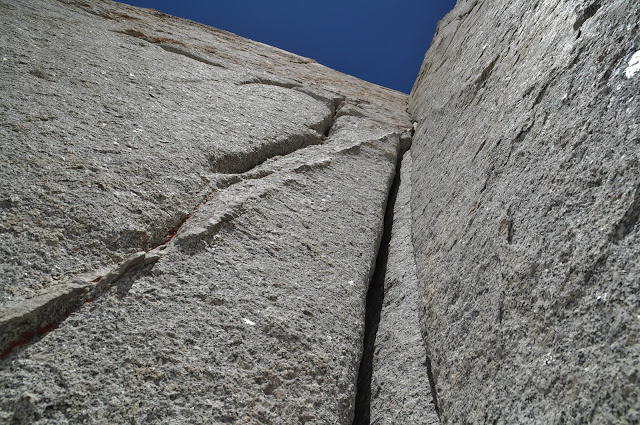 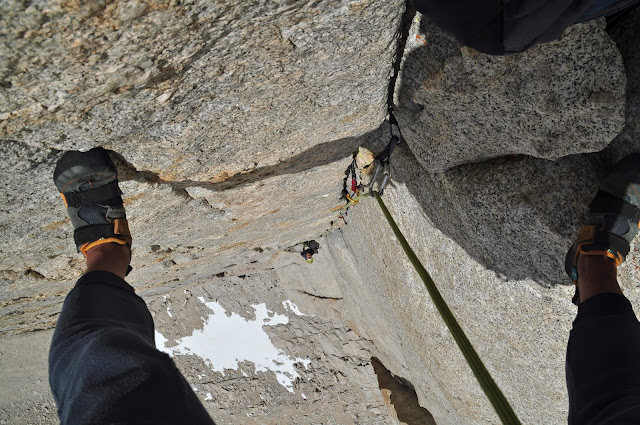 Since I suck at offwidth, the wide section at the start of pitch 4 was the clear crux for me, but it was only a few moves of struggle and then back to hand jamming bliss. One nice thing about this wide section was the thin crack running parallel on the right side, allowing me to place small gear in there instead of bringing big cams for the wide crack. This fourth pitch was the longest one by far, and was pretty sustained. Every few moves I had to pause in a high altitude pant fest. The good thing was that there were ample places to rest in the form of small ledges to the left or perfect rest stance jams for the feet. I set up a belay where the angle suddenly relented and I was almost out of gear.

looking up pitch 4, with the short wide section in the foreground 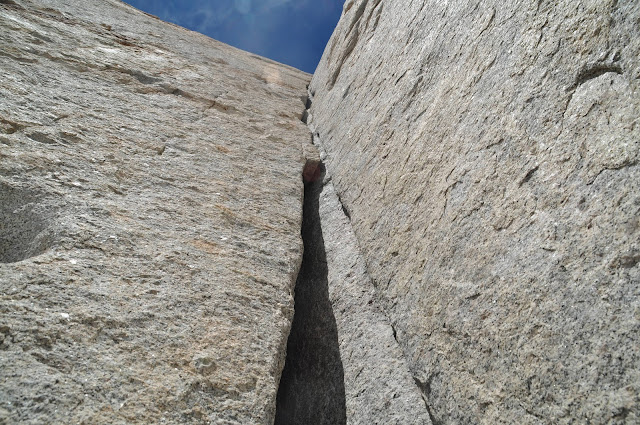 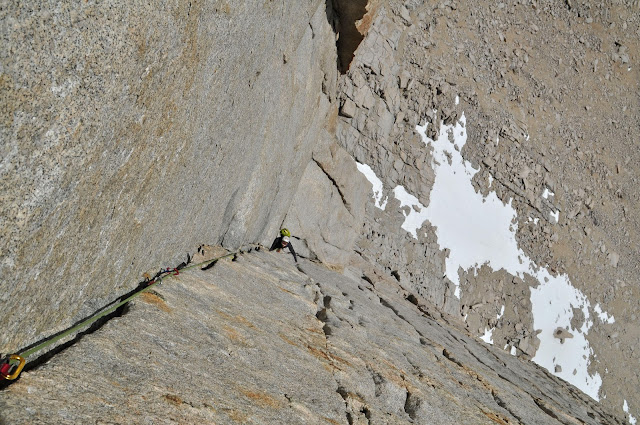 For the first part of pitch 5, the climbing was easy, with a lower angle and numerous ledges on the left. Halfway up the pitch, I realized that I had absentmindedly blown through almost all my small gear, which would be needed for the end of the pitch. Slightly shamefully, I set an anchor halfway through the pitch and belayed Donatas up with the gear.

first half of pitch 5 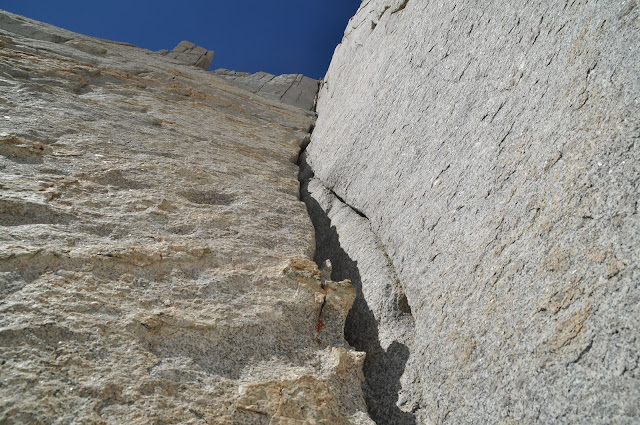 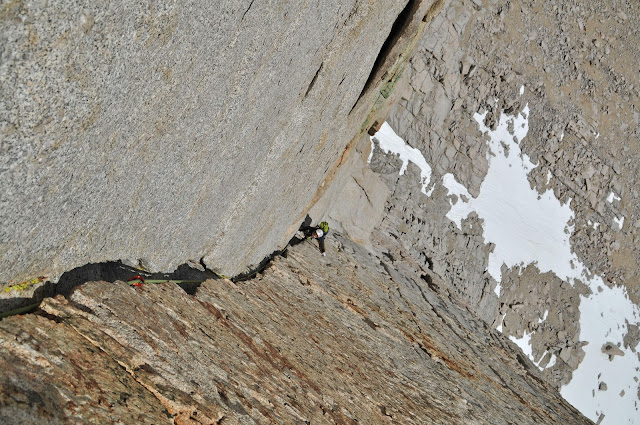 Now with renewed small gear, I finished leading the second half of pitch 5, which gradually steepened to near-vertical near the end. The last 10-15 ft of the dihedral contained a flake sticking out of the main crack system. This flake could be jammed or liebacked. Most seem to choose the lieback, which was not all that bad since there were some decent rest stances to place small gear. Some people regard this as the crux of the route, but having come from a mostly sport climbing background, it felt easier to me than most of the dihedral below. After the flake, I stepped right onto a giant belay ledge which marked the end of the dihedral, and set up a belay.

looking down shortly after starting the second half of pitch 5 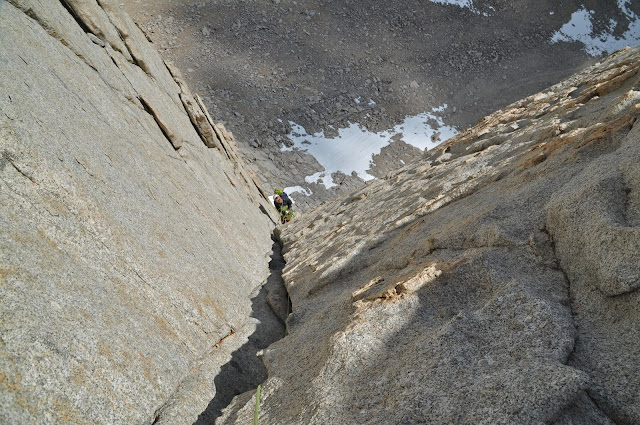 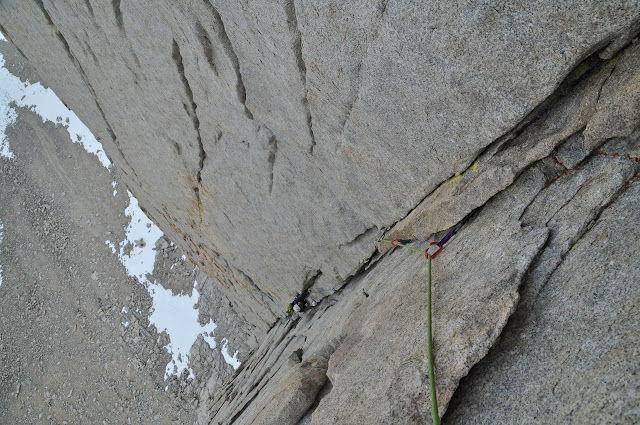 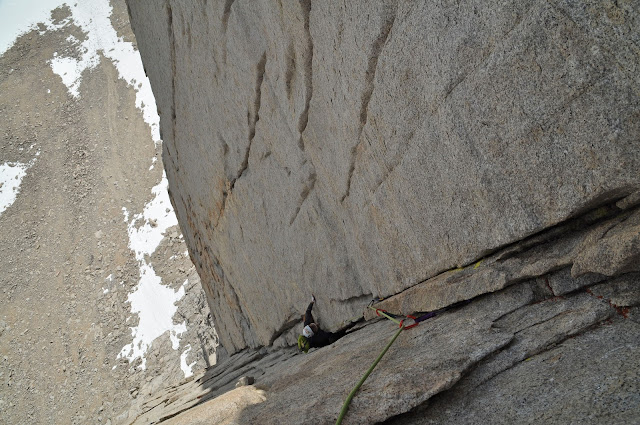 celebrating on the big ledge 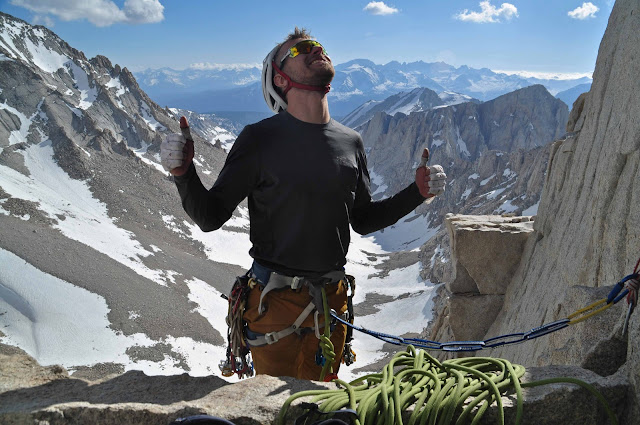 Even though we were on top of the main dihedral, the climbing was not over yet. Above us lay 3-400 ft of class 4-low 5th scrambling up a ridge to reach the summit of Mt. Russell. I led a pitch up this blocky ridge, moving left when blocked by a vertical impasse. I set up a belay about 100 ft above the big ledge due to rope drag from the wandering nature of the ridge. Since the immediate climbing up ahead looked easy, we coiled up the rope and commenced scrambling.

About 100 ft further, still on the left side of the ridge, we hit a short but steep bulge which we were not comfortable soloing, so back out came the rope. I made short work leading up the bulge, which went at about 5.6 but was extremely exposed. After this bulge, we coiled up the rope and scrambled another 150 ft of easy class 3 up to the summit. 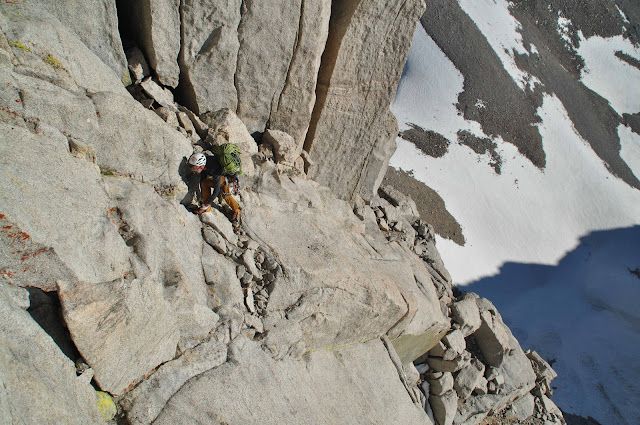 On the summit of Mt. Russell 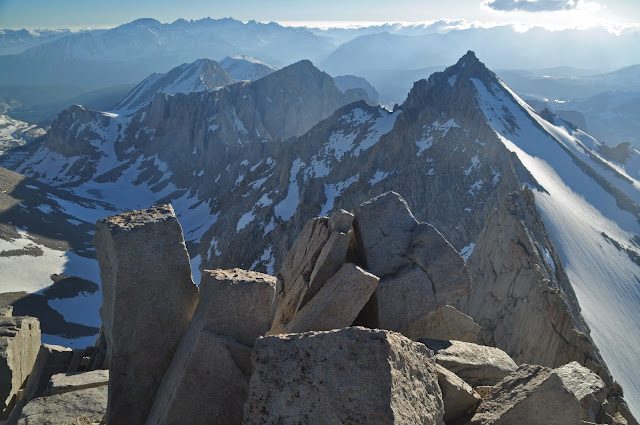 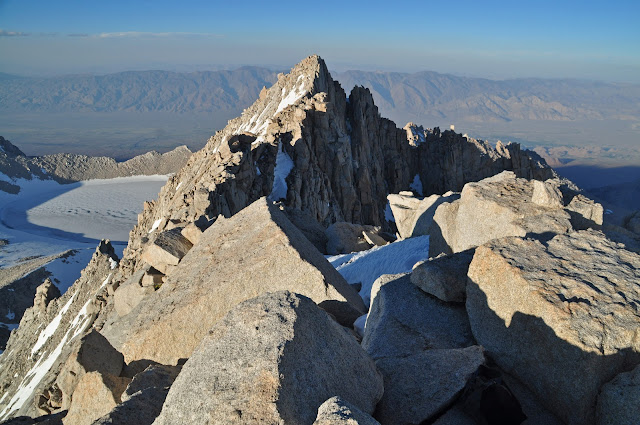 It was getting late, and we remained on the summit for only a few minutes before starting down the East Arete. From the summit, we could see a prominent gully to the right (south) of the arete. This was the gully which we were NOT to descend. The correct descent gully was the second prominent gully to the right, which came into view as we neared the lower East Summit of Mt. Russell. The top of this gully involved a few class 3 moves of downclimbing in a 30 ft loose chimney. There was some sketchy-looking rap tat at the top of the chimney. Below the chimney, hundreds of feet of endless scree awaited us. The North Face of Mt. Whitney basked in the alpenglow, distracting us from much of the nastiness. 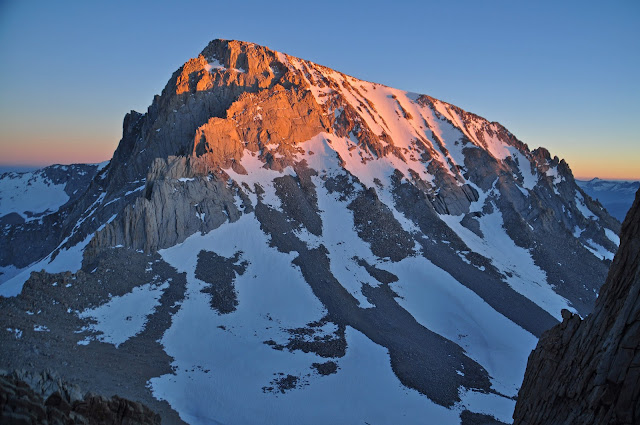 It was about 20 minutes after sunset as we reached the base of the mountain and retrieved our stashed ice axes. Another 20 minutes later as we slogged through the icy snow back on the other side of Whitney-Russell Pass, Donatas took a short tumble as his feet lost grip on the snow (we had ice axes, but no crampons), and he performed a self arrest. As he stood up, he lifted up his shirt to reveal a big patch of road rash just above his right hip, which would result in a cool looking scar for the next few weeks.

Back at camp, we quickly cooked and forced down some dinner. Due to altitude and our still un-acclimated bodies, we were not hungry at all even though our bodies needed the calories. The next morning, we still felt tired and decided to sleep in and forgo the Fishhook Arete objective, opting to slowly break down camp by noon and hike down for burgers in Lone Pine.