January 1, 2017
The new year had just arrived, just in time for an afternoon of peakbagging near Lake Hodges in Rancho Bernardo.

Del Dios Peak
This highpoint is the second most topographically prominent point in the Lake Hodges local hill cluster. Unfortunately the summit area was undergoing rapid development into an upper middle class gated community. I decided to climb it by following what others had done: ascending directly up the south side from the lake. I parked at a fairly large pullout on the south side of Del Dios Highway, just past Lake Hodges Dam. This seemed like a popular area for locals to work out as there were several other cars filling up the pullout and several people milling about a trail which meandered along the lake shore. Instead of getting on any of these trails, I jogged a few hundred feet west down the road and picked up an old dirt road heading up and north to a set of power lines. This road ended shortly, and I kept ascending the lightly bushwhacky ridge for about 1,000 ft of elevation to the end of an unfinished cul de sac. From there a short walk through an unfinished neighborhood brought me to the summit which lay at the end of another unfinished cul de sac.

starting up the ridge 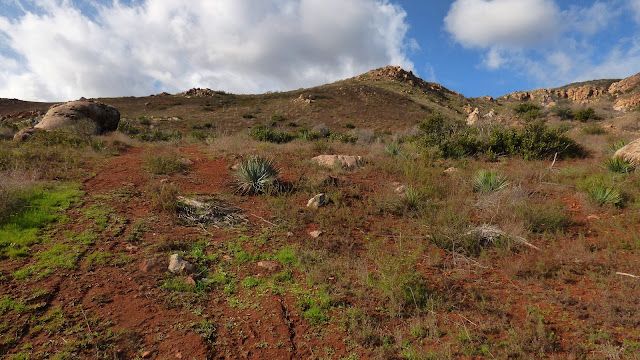 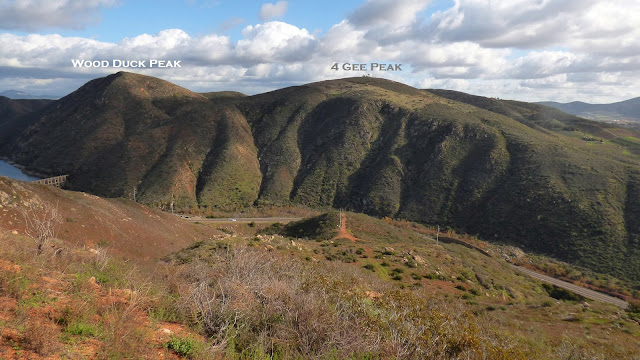 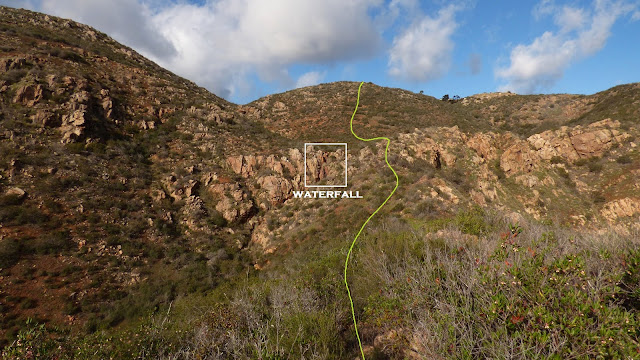 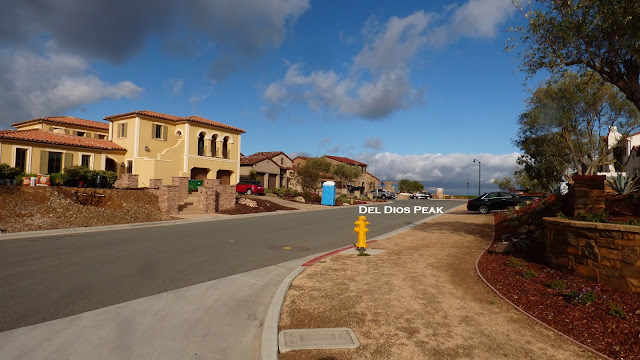 looking towards Lake Hodges from summit 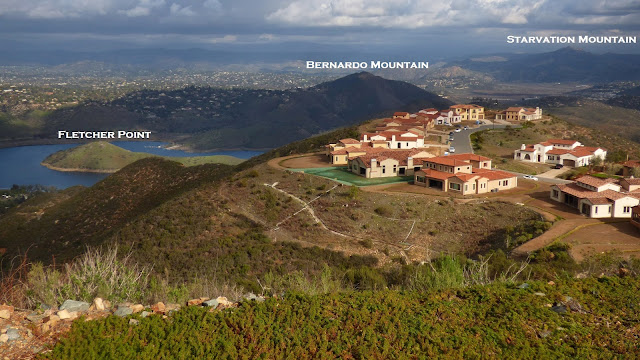 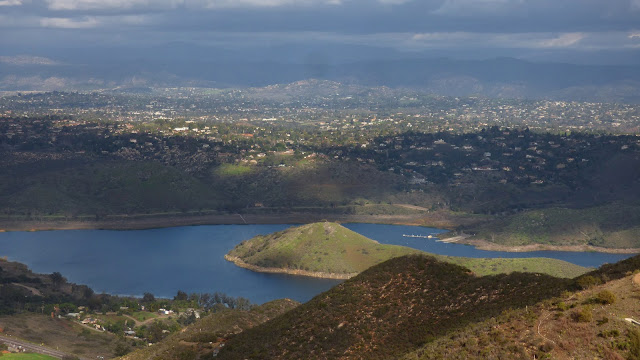 views from descent along the same route 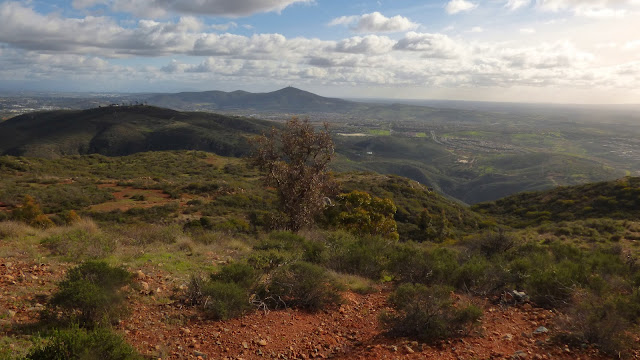 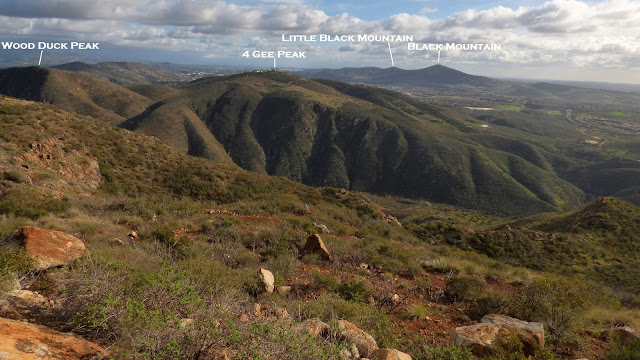 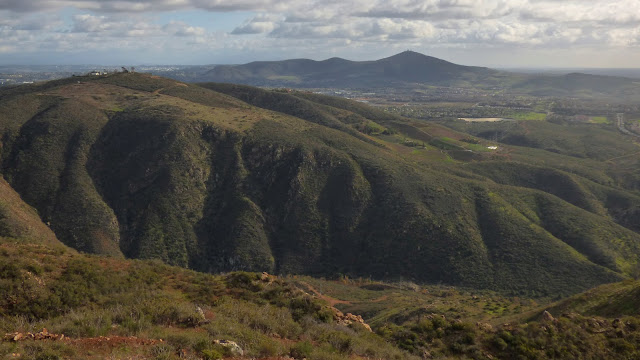 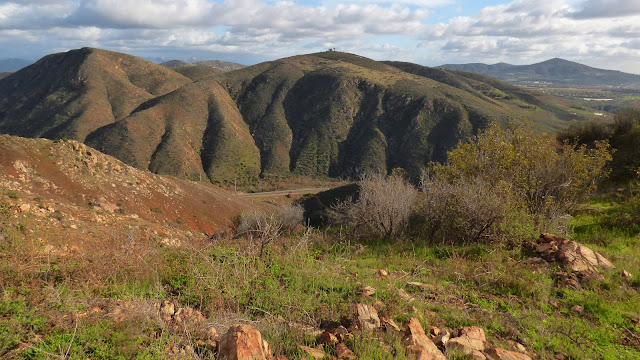 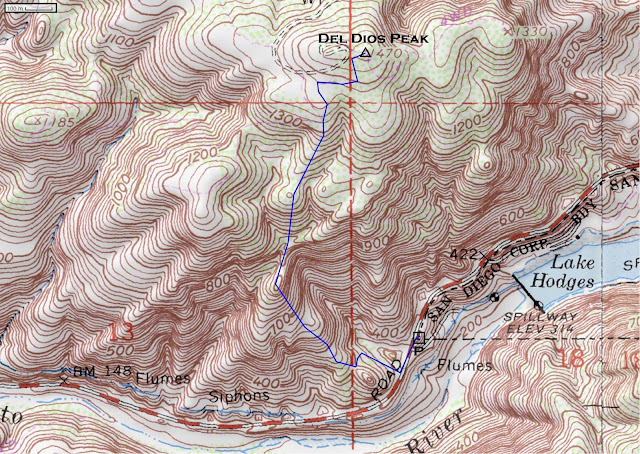 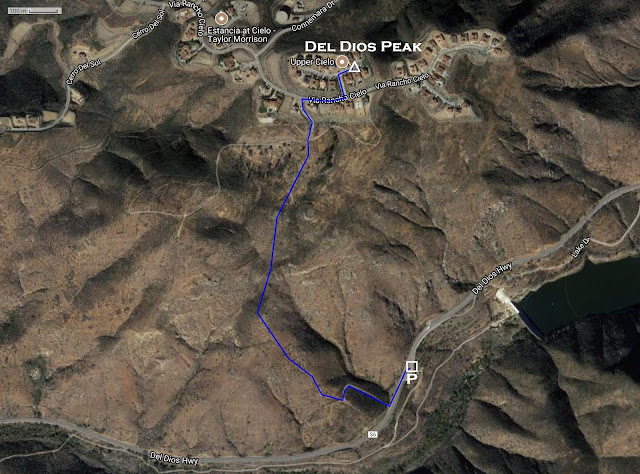 Wood Duck Peak, 4 Gee Peak
These two small peaks lay just south of the Lake Hodges Dam. I started off from Alva Rd, which wrapped around the north side of a large residential area. I left the road almost immediately, walked north across a wide open field, and passed a small pond within a stand of eucalyptus trees. A little bit of moderate bushwhacking got me onto Wood Duck Peak's east ridge, which I followed to its summit as the bushwhacking lessened. The summit contained an expansive view of Lake Hodges, perhaps the only view like this from the south. After taking in the views for a little bit, I continued south towards 4 Gee peak along the broad connecting ridge, eventually picking up an old trail at the saddle between the two peaks. This trail eventually led up to a house which I did not wish to disturb, so about 600 ft before the house, into the bushes I went. The bushwhacking was rougher here, with chaparral coming up to my neck at times. In a short time I popped out directly below the peak which contained a water tank behind a fence. My descent route headed north back through the brush for a few hundred feet, and then east through more brush to meet up with a east-heading trail which brought me back to Alva Rd. 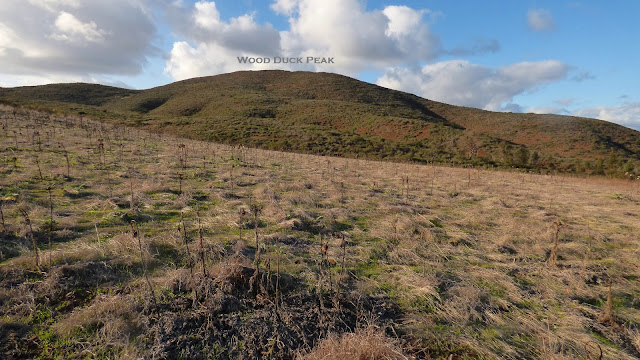 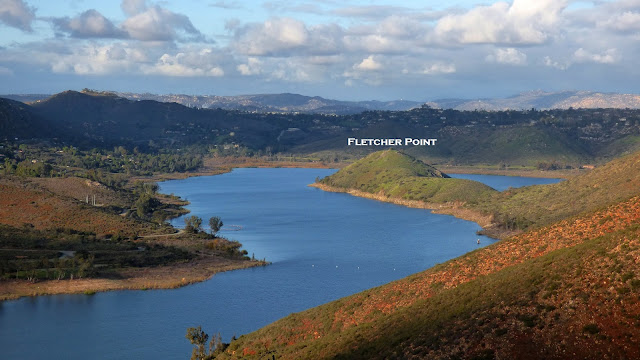 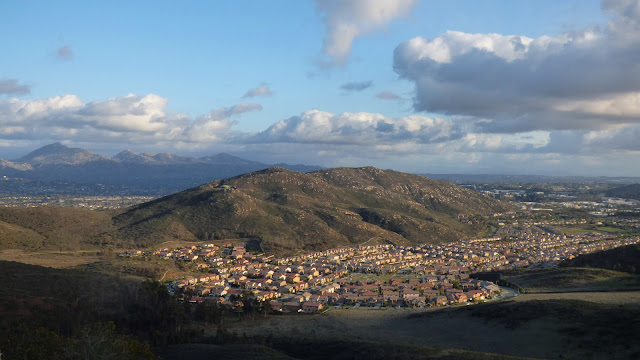 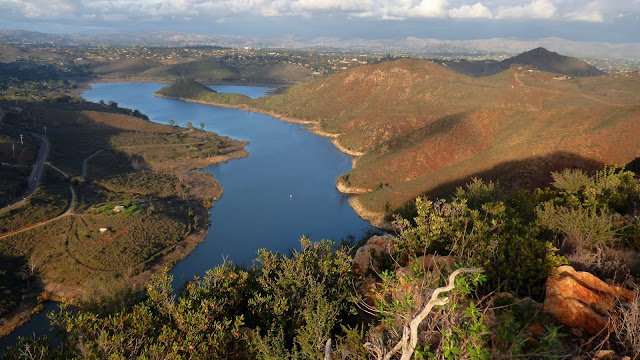 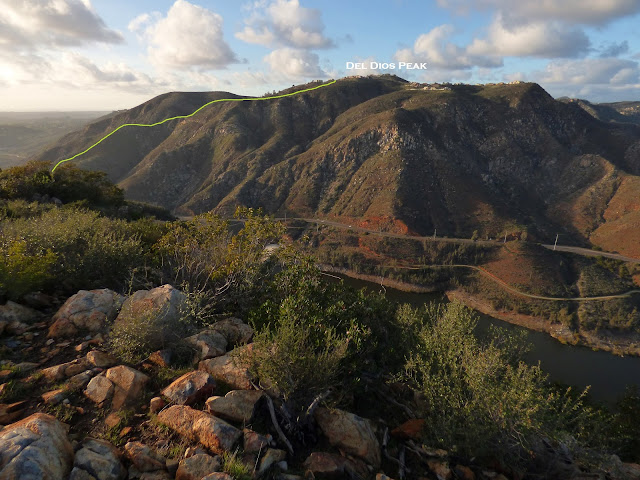 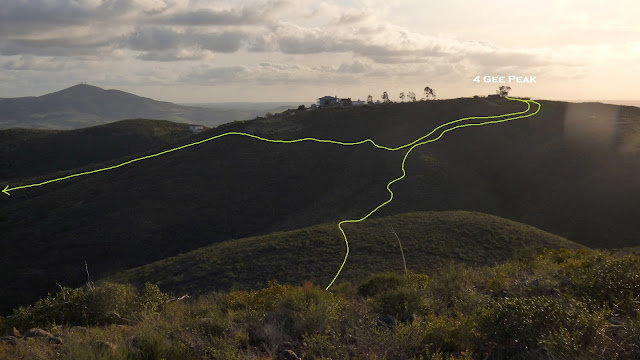 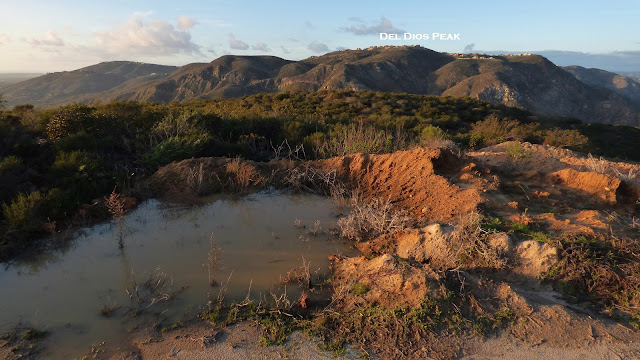 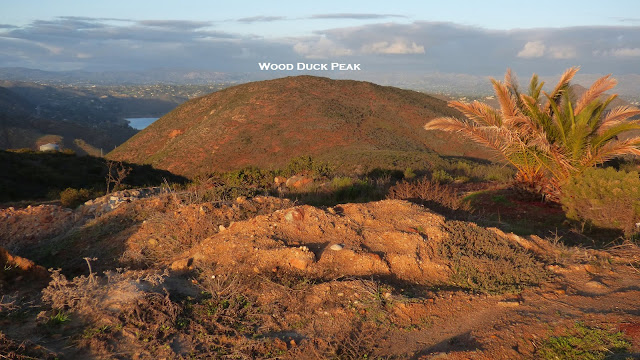 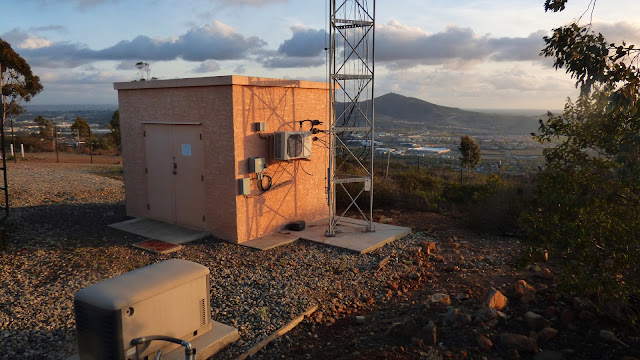 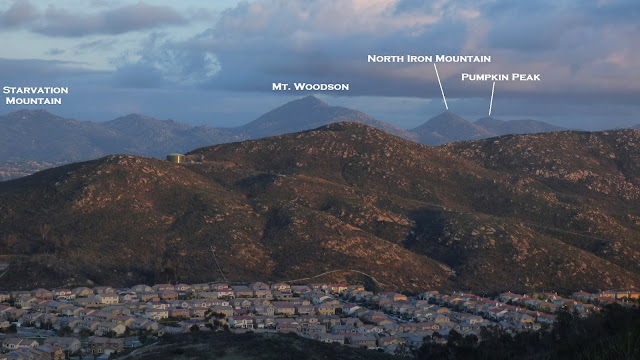 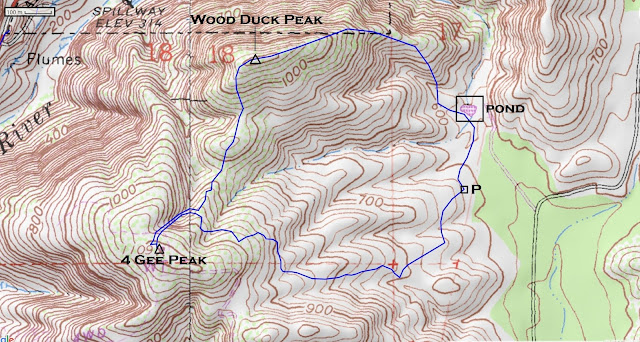 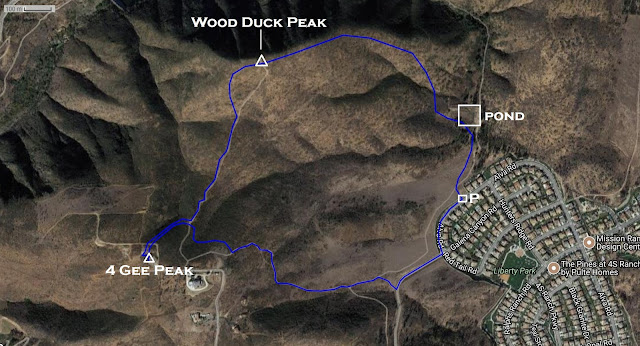