Warning: This route goes through a few spots which may have questionable legal access.

January 24, 2016
Wanting to do some local peakbagging which was not too easy but not too difficult, Mason, Sean, and I turned our attention to Henry Coe State Park, eyeing a route which Bob Burd had done in 2014. His route included 5 peaks, was mostly on trails, and involved just over 18 miles and 5,600 ft of gain- perfect for a moderate day.

The three of us arrived at Henry Coe park headquarters just after 8am and started off on the trail to Pine Ridge 15 minutes later. We planned to hike Bob's route backwards (see map), hitting Pine Ridge first. From the park headquarters, we headed north on the Monument Trail for less than 10 minutes before reaching the highpoint of Pine Ridge, which was a few hundred feet east off the trail. We simply walked up and over this highpoint, intersecting Hobbs Rd further east and following it north. 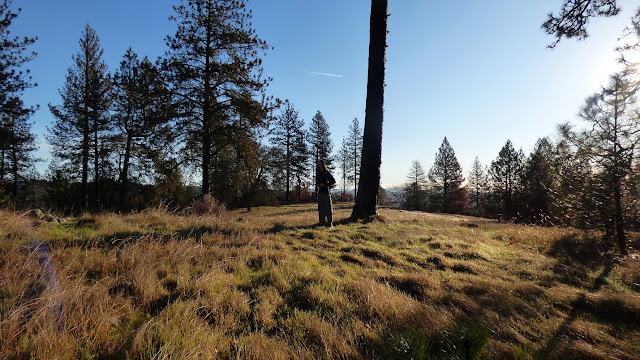 We continued north on Hobbs Rd, hiking up and over Middle Ridge, then taking off our shoes to cross the Middle Fork of Coyote Creek. After crossing Coyote Creek, the road continued northeast, switchbacking up to Blue Ridge. This part of the road was popularly known as "the steepest section of trail in the bay area," ascending over 1,400 ft in not much over a mile. Although the road was a nice and steep morning workout, I found the claim of "steepest trail in the bay area" far from true. It might be the one of the steepest public trails in the bay area, given the fact that over 95% of the Diablo Range is privately owned and not legally accessible to the public. Several steeper trails can be found elsewhere in the range (cough cough...personal experience?...cough cough). 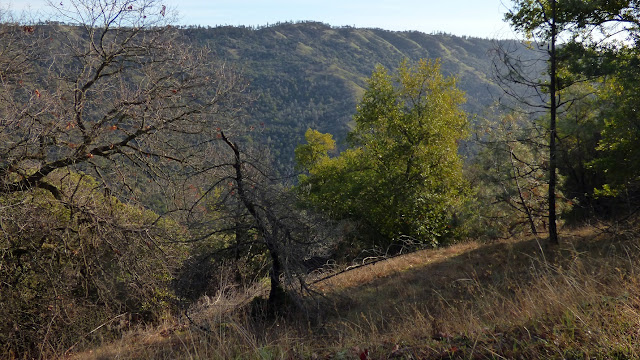 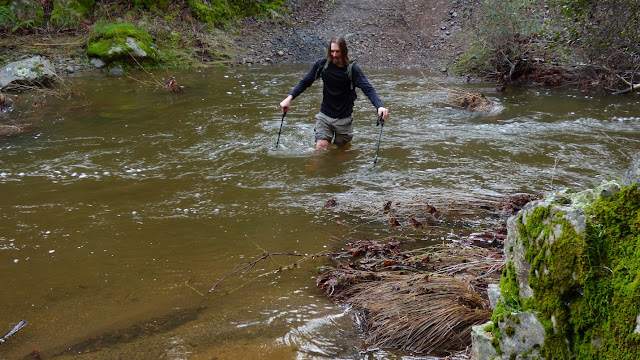 Upon reaching the crest of Blue Ridge, we turned right (southeast) and continued 1.1 miles along the crest to Mt. Sizer. This was a very relaxing and enjoyable walk under a think canopy of oaks, with eastern views all the way over to the mountains of Yosemite. The flowers hadn't started blooming yet, but the newly greening grass in certain spots signaled an oncoming spring. 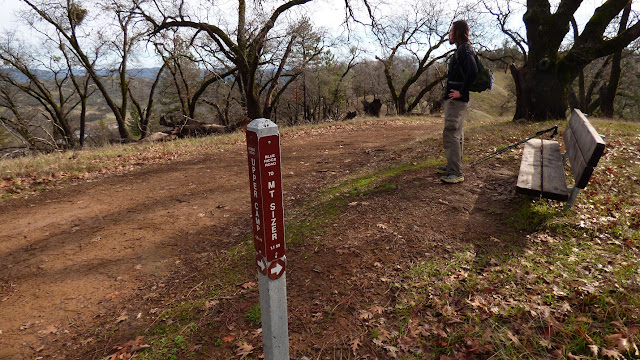 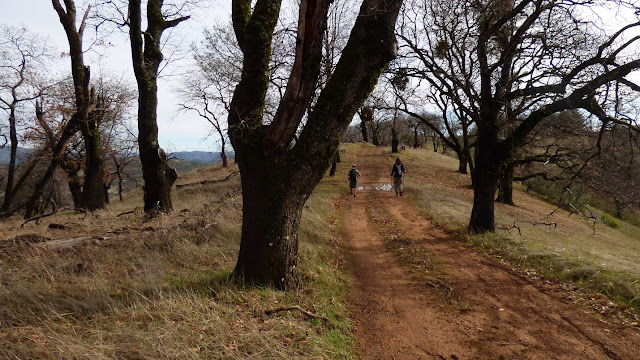 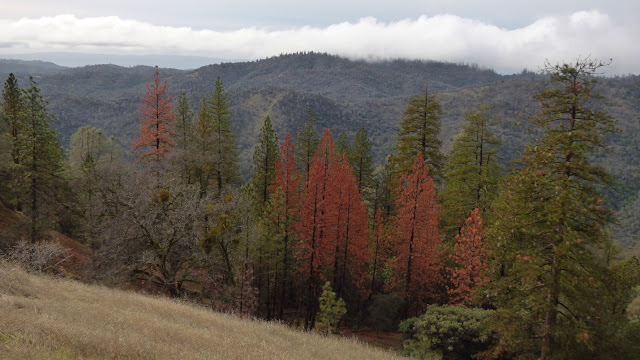 The summit of Mt. Sizer was not too exciting, with its views obscured by brush. The highlight of this peak was definitely getting there. 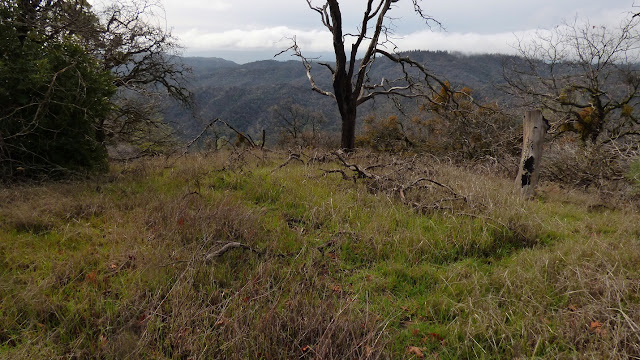 To the east of us was Hat Rock, which was the highpoint of Rock House Ridge as well as being our next peak. We headed east down Rock House Ridge, briefly leaving the park boundary immediately after Sizer and re-entering it just before Hat Rock. 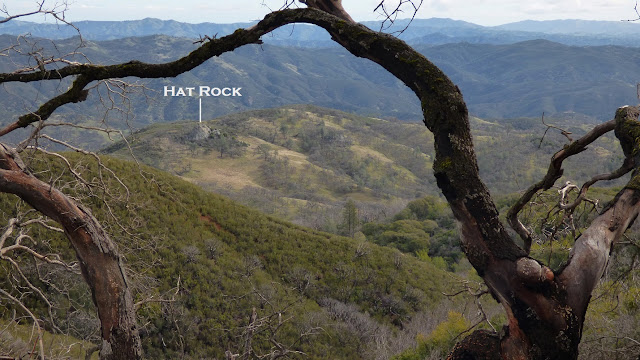 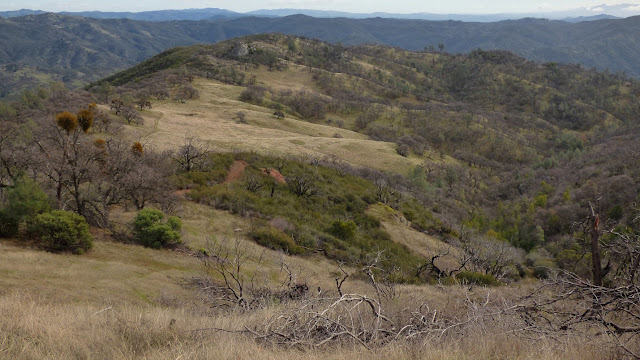 Upon reaching Hat Rock, we poked around for a bit trying to find a good way up while avoiding poison oak. We finally found a fun class 3 route up its northwestern side. The rock was somewhat unstable and slippery, requiring some caution. 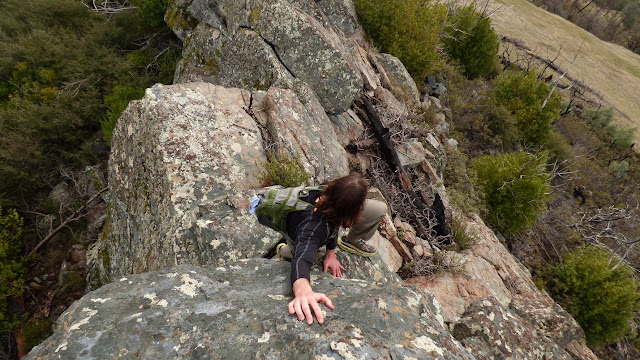 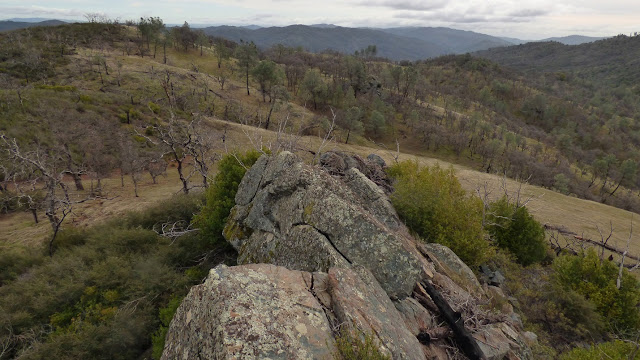 After Hat Rock, we continued southeast down the crest of Rock House Ridge. There was a faint trail along the crest, which was steadily getting overgrown. Our next peak was located just east of Rock House Ridge, prominently plopped in the middle of Coyote Creek Canyon. The park map had blotted out most of the surrounding land, indicating that this unnamed peak (which I later dubbed "Trashy Cabin Peak") was a private inholding inside the state park. This wasn't a problem, as my handy USGS topo indicated the topo lines just fine, not that they were super necessary in the first place as the route up was visibly obvious.

Since the crest of Rock House Ridge continued south past Trashy Cabin Peak, we left the crest and made a beeline for the peak once we were directly west of it. The ascent of Trashy Cabin's western side was easy enough with minimal bushwhacking. The summit of Trashy Cabin Peak was crowned with, well, a trashy cabin. Piles of junk and garbage were strewn in every which way, creating an eyesore in an otherwise beautiful and pristine landscape. 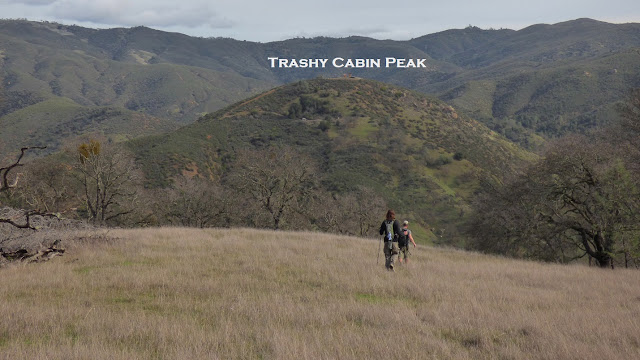 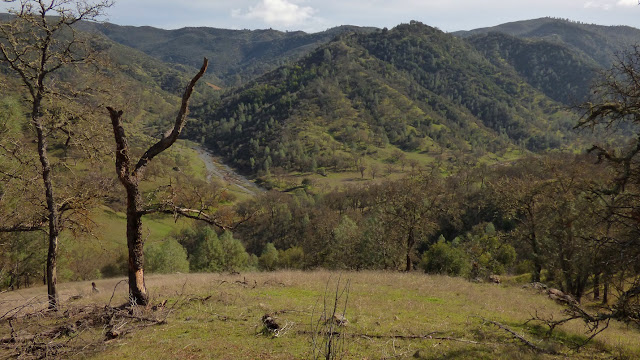 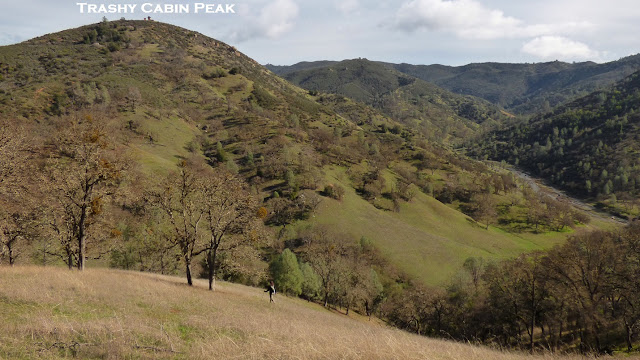 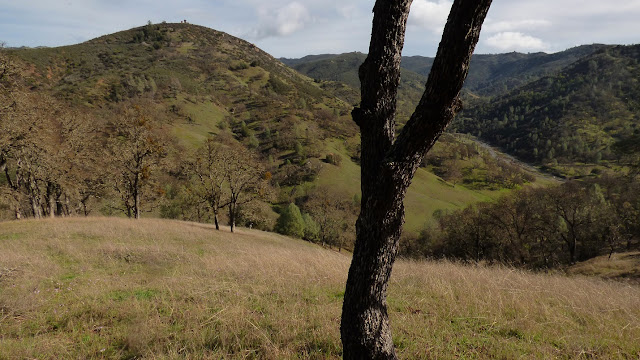 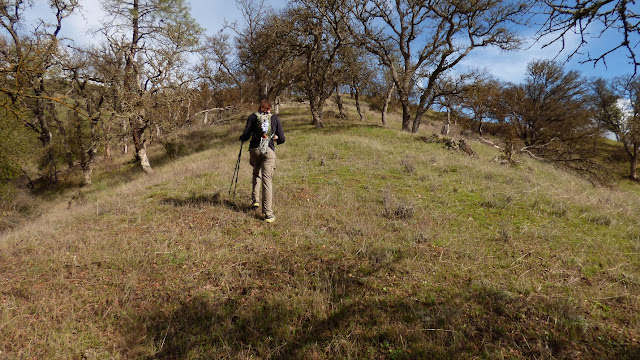 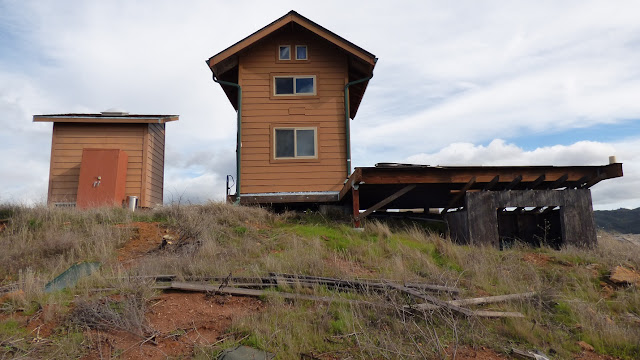 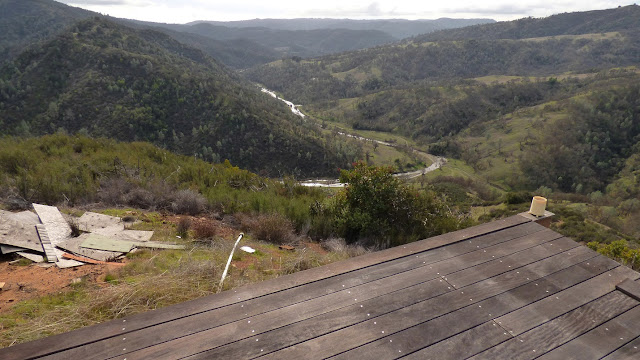 heading back down to Coyote Creek Canyon 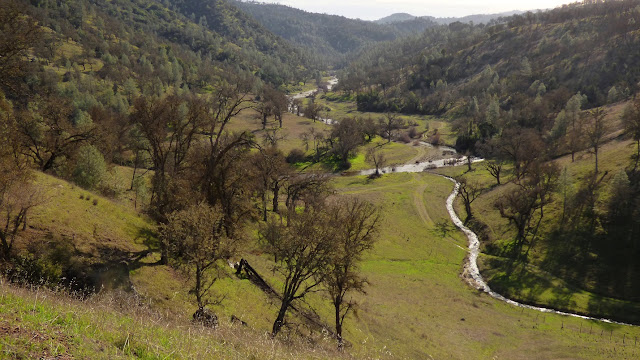 Our next task was to wrap around the south side of Blue Ridge, reaching Jackass Peak. From the west side of Trashy Cabin Peak, we continued south on Blue Ridge Rd, then took Poverty Flat Rd at an intersection. Jackass Peak was a quick 5 minute side trip off Poverty Flat Rd. How this insignificant 80ft bump became known as a peak was a mystery to us, but we were all happy to tag it. 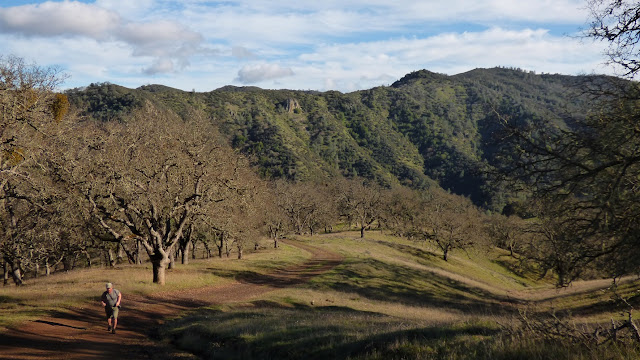 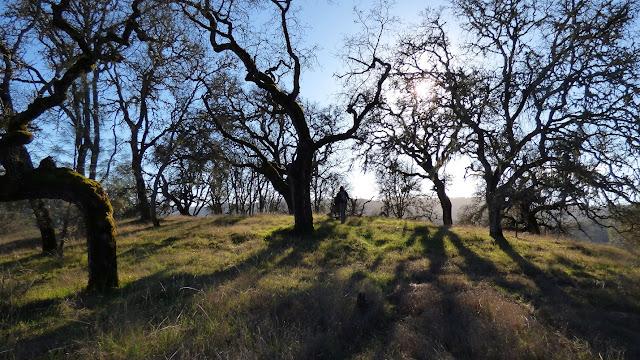 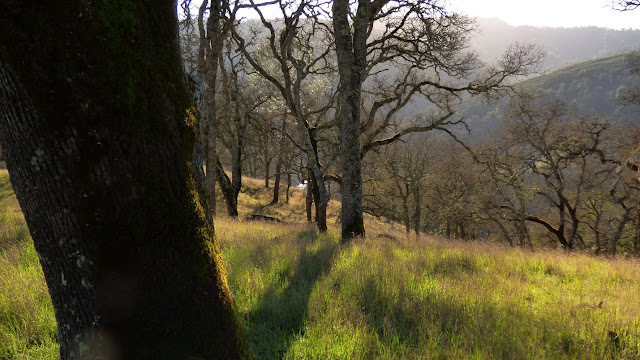 After Jackass Peak, the road descended west to Poverty Flat, where we took off our shoes to wade through the Middle Fork of Coyote Creek, now several miles downstream from where we had crossed it earlier. After the creek, we continued west up to Pine Ridge, where we intersected Manzanita Point Rd. We followed this road back to the park headquarters, enjoying the vivid displays of light as several oaks cast long shadows under the low sun. This had been another fine day in the Diablos. 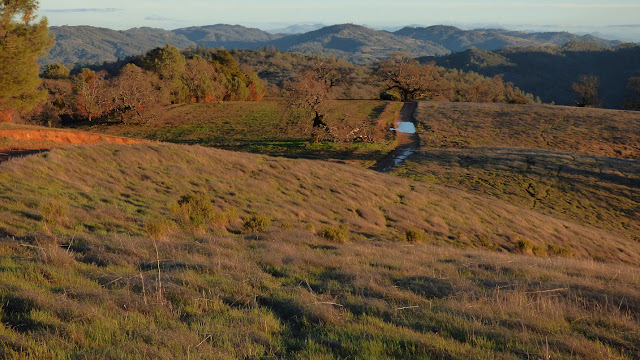 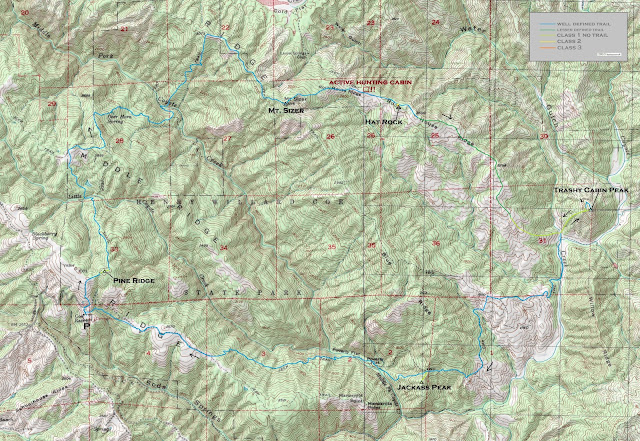