Take It Or Leavitt Traverse

May 30-31, 2015
Just south of Sonora Pass is a large horseshoe-shaped ridge which wraps around the enormous Kennedy Creek drainage. Aside from the tallest point on this ridge (Leavitt Peak), which can easily be approached via the PCT starting from Sonora Pass, the various remaining peaks, points, and pinnacles along the remainder of the ridge are seldom visited. One of them has in fact never been climbed until May 30, 2015. As with all aesthetic-looking ridges, I plotted a traverse of this one, originally designing it as a 3-day climb, but with improving snow conditions and only two days available to us, we decided to convert it to a 2-day climb. With almost 17,000 ft gain in just over 30 miles on almost all cross country terrain, this traverse is a topographic monster, likely to be one of the most difficult Northern Sierra ridge traverses in existence. At the time of writing, the Take It Or Leavitt Traverse remains the most strenuous 2-day ridge traverse I have completed.

Mason and I planned to go for the Take It Or Leavitt Traverse as a last training climb for our upcoming attempt on the notorious J-Trav the following month (which we ended up failing, but plan on re-attempting in 2016). We planned to start Take It Or Leavitt from the overnight trailhead just across the road (east) of Deadman Campground in Kennedy Meadow. From there, we would take a trail a few miles south to the start of Sharon Peak's northwest ridge, where the traverse began. After completing the large U of the traverse, we would hop back on the same trail and follow it back to Kennedy Meadow. Simple enough.

The biggest concern for the successfulness of the traverse was Molo Pinnacle: an imposing 120 ft volcanic gendarme located 0.5 mi southwest of Molo Mountain. According to all sources, it had never been successfully climbed. Bob Burd had failed to climb it on his solo attempt in 2011, recalling "It must surely be class 4-5 by the route I had first tried, but would not be scaled by me solo. I'm not sure that having a partner and rope would make me feel any more secure on the crumbling rock." A summitpost article had also mentioned that "the unstable volcanic rock makes for very dangerous climbing conditions. It will not hold protection." Despite the warnings, we still had to climb Molo Pinnacle in order to complete the traverse as it lay smack on the main traverse ridge, and that's how we found ourselves at the start of day 1 with 37 lb+ packs laden with climbing gear and 60m/9.5mm rope for a traverse that was already barely thought possible in 2 days under the late spring conditions with light backpacks. 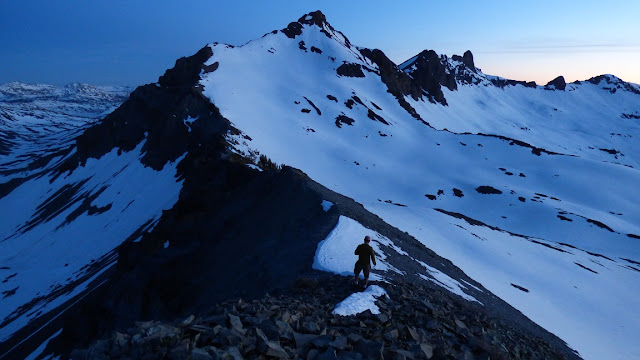 The table below includes every peak (traversing counterclockwise) on the Take It Or Leavitt Traverse. For unnamed peaks, I have dubbed names for them which are derived from the names of nearby lakes, passes, or terrain features. These dubbed names are in quotes. Peaks without quotes are either officially named by the USGS or were found named by previous parties who had written them in summit registers. 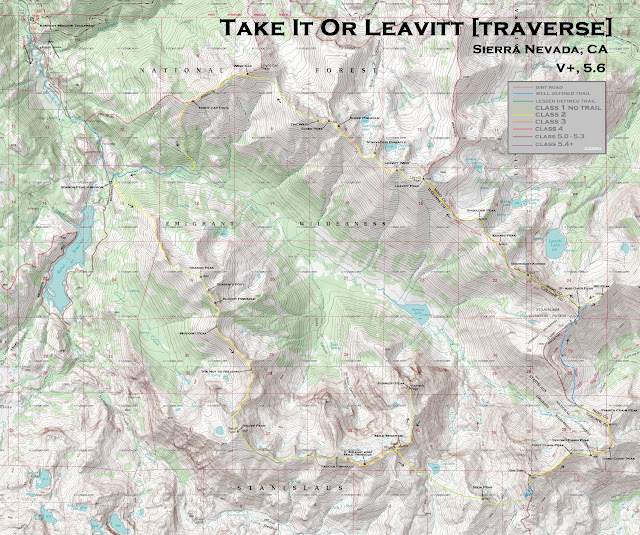