Introduction
Cactus to Clouds (aka. Chino trail, Outlaw trail) is a continuous system of trails which stretch from Palm Springs (470 ft) to San Jacinto Peak (10,834 ft), gaining 11,000 ft of elevation in 14.5 miles one way. The trail starts surrounded by cactus and desert shrubbery and ends in a sub-alpine coniferous forest. In all, the trail passes through three climactic zones. Its like going from Mexico to Alaska in a day! Compared to many major treks in the Sierra Nevada and neighboring desert ranges, C2C is a small matter. But since C2C is located only minutes from downtown Palm Springs with its easy access and a tram station at 8,500 ft along the trail, it has attracted several hikers and non-hikers of various levels of experience from all over the country, making it one of the most popular trails in all of California.

Optimal Time Of Year
This depends on what you are looking for. Most of the difficulty of this trail stems from its weather patterns.

Summer
The most notable weather hazard is heat. Between May and September, the temperature at the trailhead can easily exceed 115°F, prompting C2C'ers to start hiking well before sunrise (usually between 12-3am) when the temperature is in the mid to high 80s. The overwhelming majority of rescues and deaths that have occurred on the trail have been heat related. The number one mistake that all these incidents have in common is that the hiker(s) had made it to a certain point, got tired, and decided to descend back to the trailhead. By the time the sun rises in the summer months, the temperature in Palm Springs is easily already over 100°F and rising fast. I would not recommend doing C2C in summer. Leave it to the regulars and those training for Badwater. If you do decide to do it and have an urge to turn around and will not be able to make it back to the trailhead before sunrise, DO NOT GO DOWN. No matter how much it sucks, keep hiking up towards the tram station.

Fall/Spring
For most casual hikers, there are two generally agreed upon optimal weather windows. The most popular one is between late October when the desert floor has cooled down some and mid November before the first real snows. Even then, there can still be a temperature difference of up to 60°F between Palm Springs and San Jacinto Peak. The second window is between late April and early May. During this time, the desert heat is usually a hit or miss and the mountaintops will likely still contain some amount of leftover snow.

Winter
The upper portions of C2C offer a multitude of fun winter activities such as snowshoeing, climbing with ice axe and crampons, and occasionally skiing. Keep in mind that starting after the first snowfall, repeated melt/freeze cycles can turn all the snow into ice within a few days. The portion of C2C between the elevations of 7,400 and 8,400 ft can be especially icy and contain slopes with angles up to 30°. Ice axe and crampons are highly recommended in such conditions.

Water Availability
For most of the year, there is no water between the trailhead and Long Valley (9 miles, 8,400 ft elevation), so don't assume there will be any water before Long Valley. I have mostly gotten water from the bathrooms of the Long valley Ranger Station (tastes gross, but its still water). There are also water fountains on the second floor of the nearby tram station. Between Long Valley and San Jacinto Peak, there are several creeks and springs with varying amounts of water flow from year to year. A good resource for water conditions is the San Jacinto Message Board.

Route Description
Over the years, several new variations and shortcuts of C2C have popped up. The following route description describes the original (and most popular) route. This route is divided into two parts: the Skyline Trail and San Jacinto Peak Trail.

Getting to the trailhead
The trail starts from the northern parking lot of the Palm Springs Art Museum (101 North Museum Drive, Palm Springs, CA) at a sign which reads "Welcome to the Museum Trail."

Part 1: Skyline Trail
The first 9.1 miles and 8,390 ft of gain of C2C between the trailhead and Long Valley is known as the Skyline Trail. This potion of the trail was originally built by the Civilian Conservation Corps during the Great Depression and has since then been unmaintained, but exists in a well defined condition due to heavy foot traffic. The first 0.8 miles of trail after leaving the trailhead (known as the Museum Trail) can be a little confusing. There are several use-trails which branch off in many directions. As long as the trail dosent start to fade or suddenly gain a lot of elevation, its probably the right one. At 0.8 miles, a set of picnic tables marks the end of the Museum Trail. 0.1 miles after the tables, another trail will branch off to the left, marked by a large cairn. This is the North Lykken Trail. Stay right to continue up Skyline. At 2.2 miles you pass Rescue Box 1 on your left (the next one is at 6.6 miles). These boxes were installed recently in response to all the Skyline rescues. Each box contains food, water, and a cell phone to call 911. 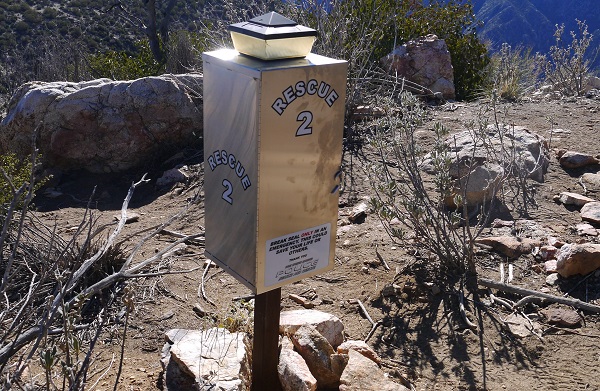 At 4.4 miles and 4,300 ft elevation, you may or may not come across a series of pebbles arranged so they spell "4300." This has become a sort of local tradition. Whenever the pebbles get kicked around by other hikers or blown away in storms, they are always put back shortly after. The next few miles are characterized by a series of rolling hills with a string of small ups and downs. Some call this part the "Never Ending Ridge." At 7.4 miles, the trail goes right by the famous Flat Rock: a large and smooth (but not really flat) slab of water-polished granite. This is a popular spot to take a break before the trail begins to steepen. 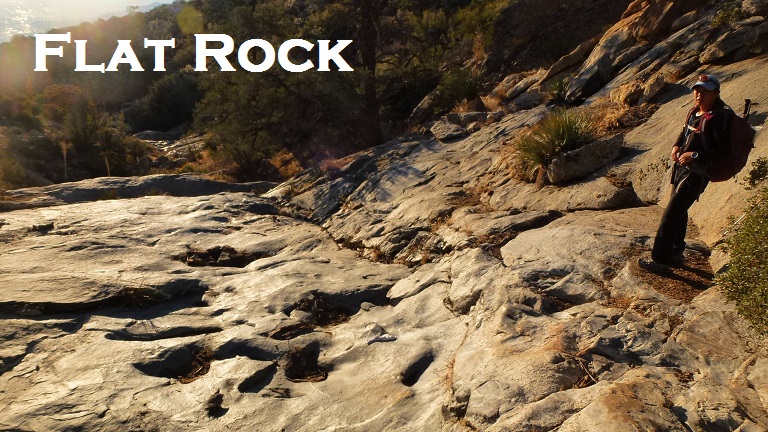 The trail will then switchback up manzanita-covered slopes to The Traverse. This is where the trail makes a transition from the eastern slopes of the mountain to the northern slopes. The terrain steepens and since it its north facing, it is colder and icier here in the winter compared to the rest of Skyline. 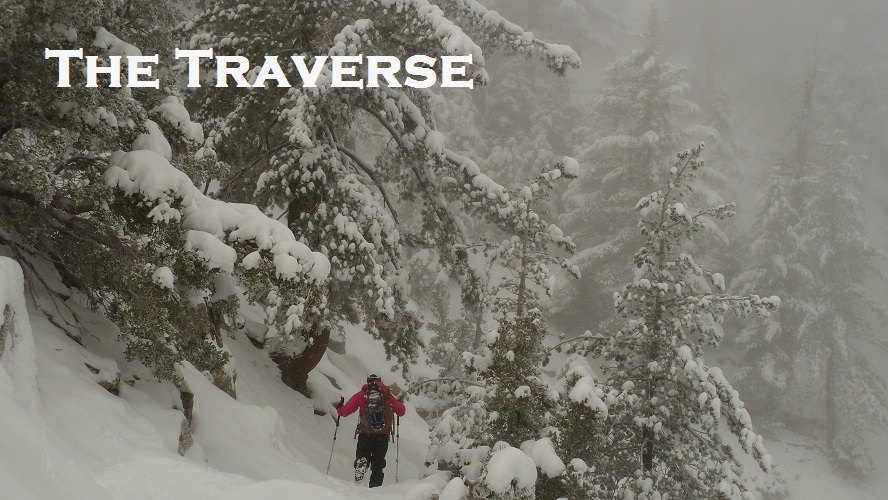 During winter months, some have gotten lost here when snow covers the trail. A good thing to remember is that the trail heads up along the left side of Coffman's Crag: a very large and obvious rock formation. From Coffman's Crag, Grubb's Notch, the entrance to Long Valley, is 0.3 miles away to the southwest. Many people consider Grubb's Notch to be the official end to Skyline since Long Valley contains well maintained trails managed by the state park service. 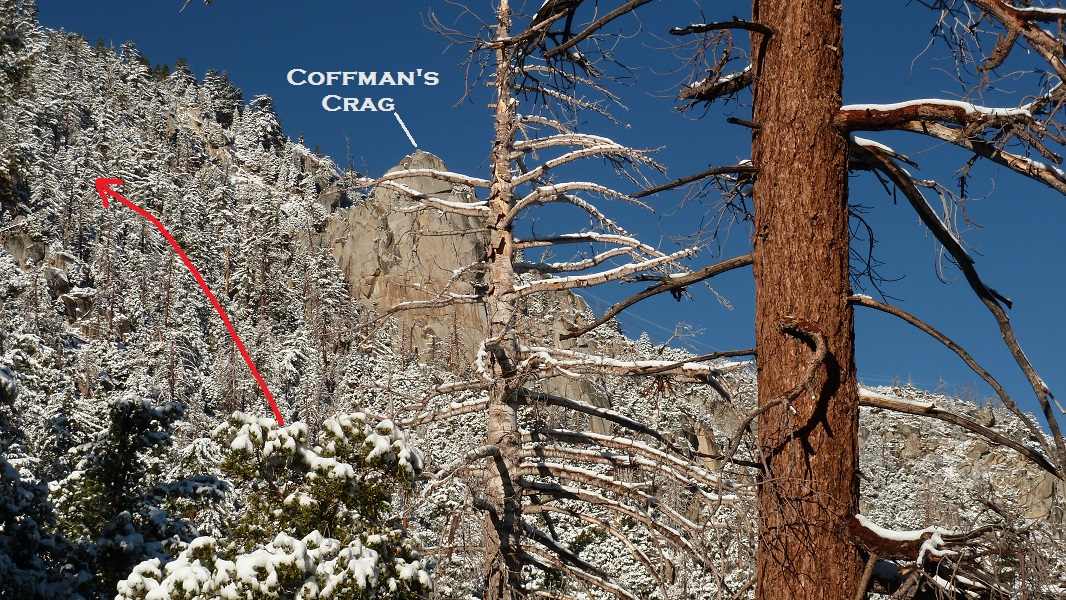 To get to the San Jacinto Peak Trail from Grubb's Notch, take a right onto a wide, flat trail for 0.3 miles to the base of the tram ramp. The Long Valley Ranger Station should be visible to the left on the other side of a small footbridge. This is the start of the San Jacinto Peak Trail. All hikers are required to fill out a free day-use permit at the ranger station before going any further.

To Hike Down or Not To Hike Down?
Most people who do this hike do not go all the way back to the trailhead. They hike back to the tram station and take the tram down ($12 one way), then take a taxi back to the trailhead (usually ~$25, the ticket agent can arrange for a taxi). If you are looking to save some money and/or give yourself a little bit more of a challenge, why not hike back down? Just be sure to know what the temperature is down at the desert at your time of descent and make good decisions about possible risks. The full trailhead-to-trailhead hike is known as C2C2C.

Alternates Routes and Variations
Over the years, there have been several shortcuts and alternate trails which have stemmed from C2C. Three of the most popular ones are described below.

North Lykken Trail (1.4 miles, 1,040 ft gain)
This alternate start to the Museum Trail begins at the end of West Ramon Road a short distance south of the museum. It merges with the Skyline Trail just above the picnic tables. The junction is marked by a large cairn. From West Ramon Road, head onto a dirt road branching off to the left (west). Walk 0.1 miles to a sign where a trail will branch off to the left. This trail will merge with Skyline in 1.3 miles. This approach contains an extra 0.4 miles and 50 ft of elevation gain compared to the Museum Trail option. 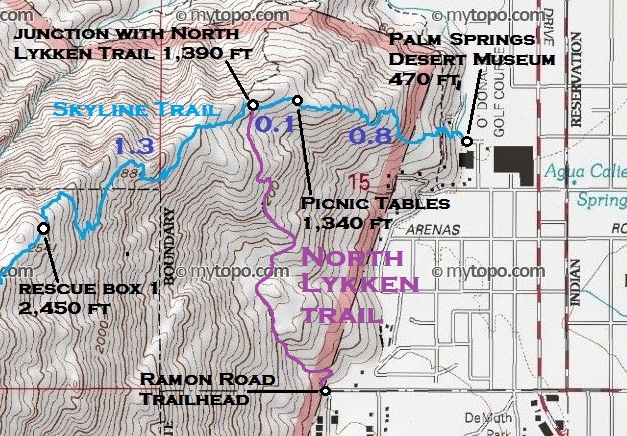 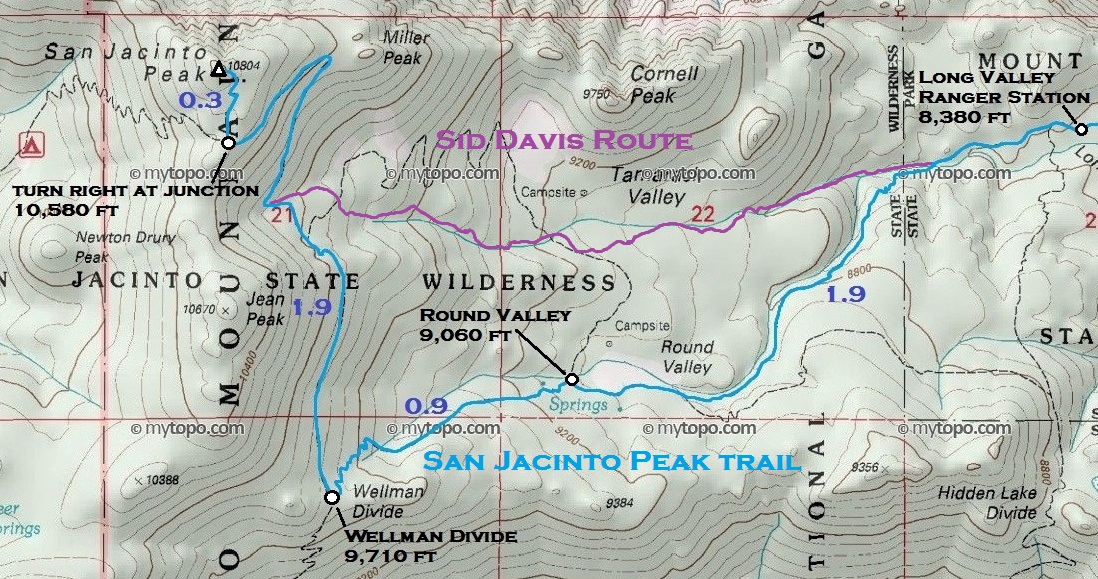 North Ridge Shortcut (0.4 miles, 370 ft gain)
This is a shortcut along the northeast ridge of San Jacinto Peak. It has also been called the East Ridge Trail or The Winter Route or Ellen's Shortcut. This cuts off half of the giant switchback the San Jacinto Peak Trail makes shortly before the summit (the same one mentioned above). From the northern end of the giant switchback, leave the trail and head 100 ft north to a flat area west of Miller Peak (known as Miller Saddle). Turn left and continue up the broad northeast ridge of San Jacinto Peak to the summit. There is an old and faint unmaintained trail on the ridge. This shortcut is excellent in winter with snowshoes. 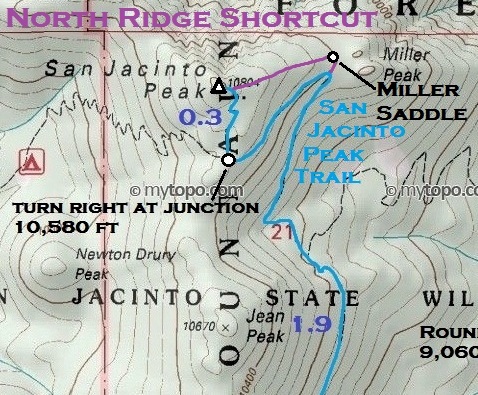